If your family is like ours, you look forward to a turkey feast on at least two of the three big holidays in the year. But if you are like my coworkers, you dread the two weeks of turkey leftovers afterwards. A guy can only be asked to eat so many turkey sandwiches before he goes psycho.

Back in the early married era, I was fortunate to find a fantastic chicken pot pie recipe called "Hingle Pot Pie" in a cookbook by a local Amish lady, Edna Staebler. Edna didn't know her recipe would be adapted into a post-holiday tradition for our family, but I am very happy she published a cookbook. If you are looking for a book full of simple, earthy Amish meat dishes, check out this book.

Since then I've moved away from the St. Jacobs/Kitchener Amish community, but we still go back to visit, and we cook the odd Schnitzel or Saerbraeten. The Amish love down-to-earth cooking with simple ingredients, seasonings and textures. Great meals for the learning cook.

According to Edna, you start this meal by boiling chicken pieces, and reserving the broth, but since we use leftover turkey, no chicken boiling will be necessary. Instead, we start by making the noodle-dumplings that set this pot pie apart from the rest. 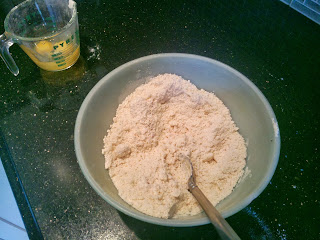 Pull out your favourite medium mixing bowl, and combine 2 cups of flour with 2 tablespoons of butter We use margarine because cruelty to cows. Or something. Mix the butter and flour until crumbly. Then add 2 eggs you've beaten into submission. I'm all for cruelty to chicken embryos. The mixture should be starting to resemble biscuit batter. One its a nice thick lump, drizzle enough milk in to make it sticky. Ha-Ha cow babies, no milk for you!. Too much, and you've made glue, too little, and its sticky tack. In the pic below, I am a little on the modge-podge side of just right. 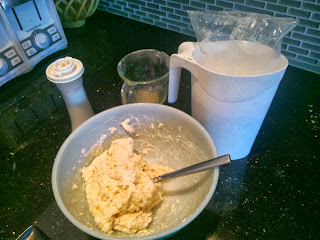 Edna advises to roll this thinly on a floured board. But it never works for me. See - the rolled dough is always bigger than our biggest cutting board. Luckily we have nice smooth countertops that work just as well as a floured board. Eat your heart out Edna!! I roll the dough out on the counter most times. I also flour the countertop and the dough liberally to suck up any excess moisture I may have added in the add milk stage. I never get the milk stage just right. 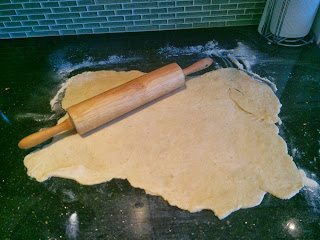 Once the dough is rolled, the recipe calls for it to be cut into 1-1/2" squares. I could convert that to metric, but I'm too lazy, so I just cut into big rectangles that look like they're about the right size. A butter knife is best for this. You have to roll it along its edge, not drag it through the dough.You can see where I dragged it below - it cuts poorly, and sticks to the dough. 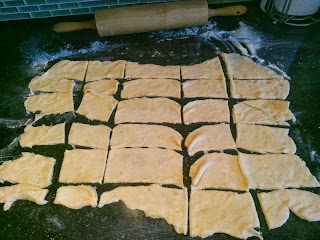 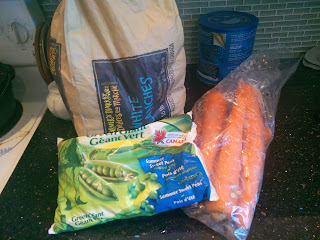 Those carrots are monsters. I have no idea where SWMBO found carrots that HUGE! I only needed 1 for our whole family! Anyways peel and chop the carrots, and cut the potatoes as if you are making scalloped potatoes. You should also strip your turkey off the bones and chunk it into bite-sized cubes. Normally I wouldn't make extra dishes for myself, but things photograph better in bowls, so here are our veggies ready for the pot, and the dumplings rested and ready for action. Peas are back in the freezer so they don't thaw out too soon. 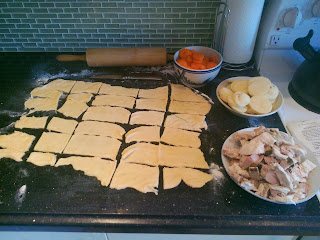 See that bowl the carrots are in? That is my Delft bowl. I love that bowl. The carrots have a place of honour in this pic. If you are my kid and you want to get me a super-cool Christmas gift I would love another 3 or 7 of those bowls. They show up in antique shops from time to time. Price point is usually between $10 - $15 and they are perfect for setting aside spices or eggs or whatever, plus they are painted so nice. Love 'em.

Ok, its assembly time... Put a layer of potatoes in the bottom of a dutch oven (all Dads are into cooking with Dutch ovens. Its a known fact.) On top of the potatoes, lay in a layer of noodle-dumplings. Don't grease the pot! I had started to melt butter for something else here, and it didn't work out well. The potatoes got fried. 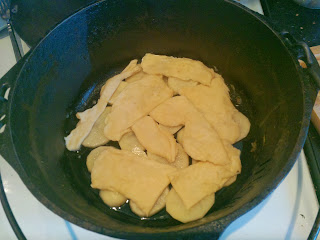 Next a layer of carrots, followed by peas, sprinkle with salt and pepper, other spices if you want, but we just use salt and pepper for a nice country dinner... 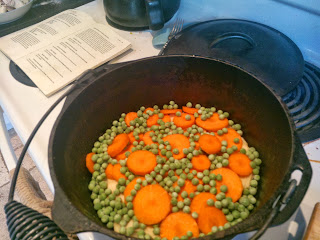 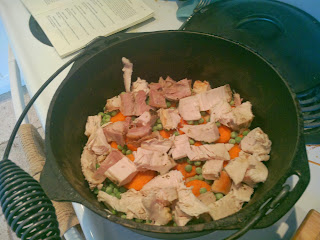 And another layer of nooodles and potatoes... 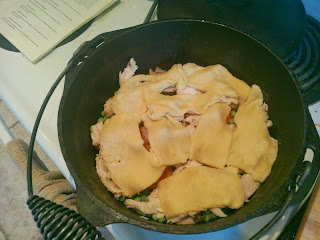 Its turning into a leftover turkey and veggie lasagna!! Now another layer of peas and carrots, followed by a top layer of noodles, and the pot is full. 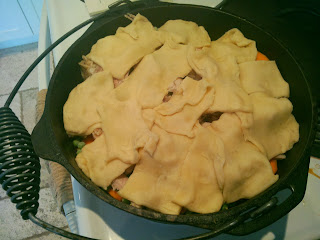 With the pot full to the top, I add in 2 cups of chicken bouillon plus one cup of water. By the way honey - I used the last bouillon cube. The liquid should come halfway up the pot. Now put a lid on it, set the stove to boil, and then turn it down as soon as it begins to bubble. You want to simmer the pot for a bout half an hour.

When its done, it won't look very pretty. I'll let you dream up some garnishes, but a sprinkle of parsley or a few chopped tomatoes might give it more appeal on the table. Sorry about the bad picture, the tablet tried to focus on steam instead of food. 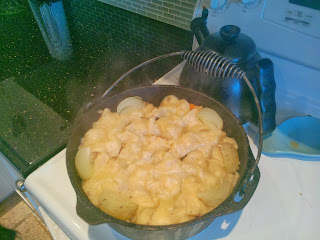 Serve hot! It will cool quickly. As a bonus, with everything in bite-sized chunks the little guys won't need you to cut their dinner - which is basically like a dinner out.  Here it is plated and ready for eating! The place mat is an anti-gravity model and has to be upside down to work properly. We serve with sour cream and salt and pepper, but really its just fine on its own. Simple country food without a lot of mess or effort - just my kind of meal. It even tastes better the next day as leftovers. 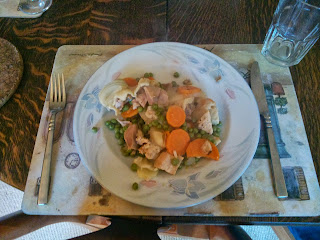 Posted by littleboatiris at Thursday, October 24, 2013