Yes, we got more chickens.
And for the first week, they lived in the house.
Yes, seriously.

These chickens were picked up from a lady who is clearing out all her stock, so they were no charge, we just had to go get them, fast.

And, they needed to be quarantined from the other chickens. Which meant we had to build a second chicken coop, fast.

That was the tricky part.

Prospector started the coop on Monday, when we first found we were getting them, hoping to be done by Thursday, when we were picking them up. We were picking up a roof along with the chickens, that would go onto the coop.

We got the chickens on Thursday. But didn't get home until well after dark. There was no way the roof was going on that night. So we put the chickens in the dog's box, and went to sleep.

There were six new ones... four hens, and two roosters.

Since daylight savings, we get home after dark every night. So not much got done on Friday either.

at 7:00 on Saturday morning, I asked if I went and turned the light on over their cage, if they would stop cock-a-doodle-dooing, thinking it was daylight. Prospector said try it.

On Sunday at 7:30, I asked him what he wanted for breakfast (yes, we're now up to Thursday, Friday, & Saturday nights now)... The response? "The one that just cock-a-doodle-dood."

Sunday he made good progress.. but not quite enough. Monday, it was cold. Tuesday, it was raining. and Wednesday was high school info night.

Thursday morning we had a midwife appt. So he had a half hour of daylight before we left where he was able to get work done. By the time we left for the appt, a rooster & hen were out there. We figured if they were still there when we got home, it was secure. They were.

By Thursday night, he was nearly done, so even though the weather wasn't ideal, he was able to secure it enough to leave the birds out overnight.

So in total, they spent seven nights here: 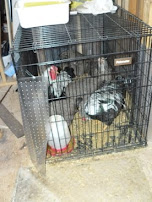 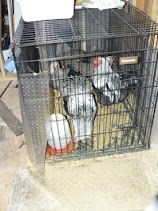 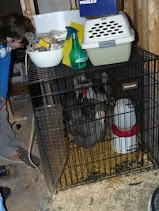 Still to be completed, egg boxes, weather proofing, trap door, human door. But at least they aren't waking me up four times before I need to be up now!
Posted by Star at Saturday, November 27, 2010