Digging Down, Building Up

SO by now you should have a feel for the scope of our retaining wall project.

After days of digging, we finally reached the shed, and it was time to start doing something new... 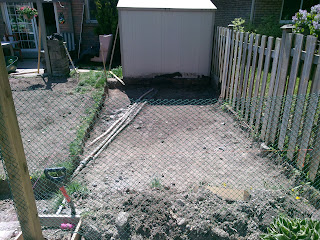 After all that digging, everyone was about worn out!

With the sod and topsoil removed from the site, we needed to address the pool plumbing issues. If we leave the pool pipes in their current location, they will be buried in a sandbox, and a pain to get at for future servicing. Besides, they're in the way for our retaining wall work!

Getting at the pipes meant breaking up the Concrete pool stairs and a part of the pool deck. 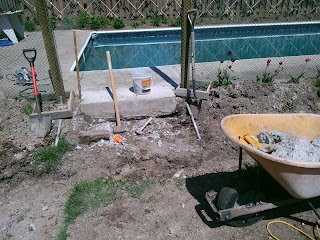 The stairs really didn't want to move, and it was a lot of work to get them out. The pool deck at this spot has been overlaid with a few lifts of concrete to try and level it in the past. I think this is the most invasive surgery its seen though. 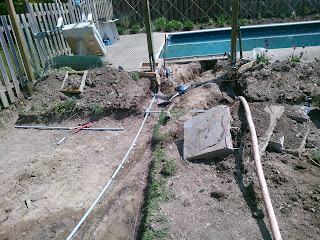 With the stairs removed, we lifted the pipes from their spot in the future sandbox. The pile of concrete rubble was a pain in the but to work around, but we managed.﻿ 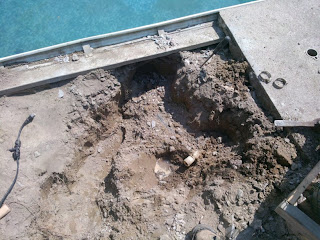 Here you can see the structure of the pool. The plastic coping is exposed with the concrete removed, and the Tee fitting that sends water from the pump to the pool jets is sticking out of the sand. We will be recycling the sand from this area and moving it to other parts of the yard as we go. 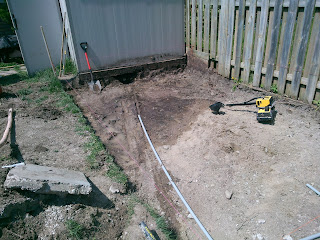 With the pipes removed, we levelled out the sandbox, and finished running conduit for future electric work. 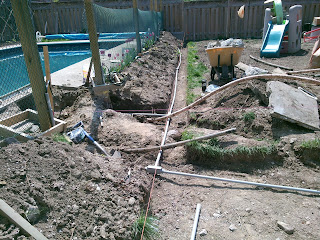 Electric all roughed in, and its time to start laying blocks.

The base course of the keystone blocks for the wall went in really slowly. As I went I got better and faster at it, but working on this was very tedious and time consuming. At first it was taking me about 10 - 15 minutes per block. By the time we were done the base course, I could lay a block in 3-5 minutes. Sometimes less. 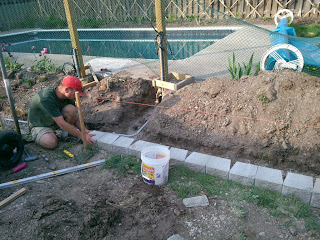 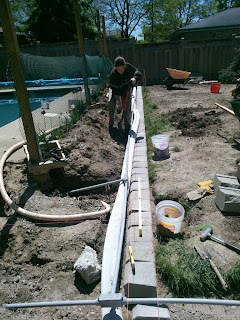 Lotsa bricks in, and the Big-O drainage pipe in place. I don't think we needed the one with the filter on it, but it only cost us an extra $10, so what the heck.

One of our challenges with the electric was that where the conduit crosses the wall, I needed to cut a chase in the block. I used a concrete blade in a skil saw to cut a few grooves, then chiseled out the material. When I test fit it, the groove was too shallow and the box didn't fit in the groove. 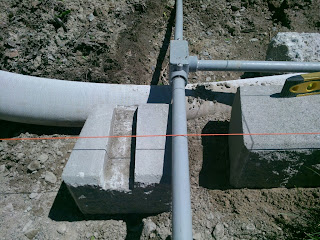 To make everything fit, I went back and chiseled out a recess for the box to sit in. No one will ever see this, but I'm kindof proud of how nicely it worked out. 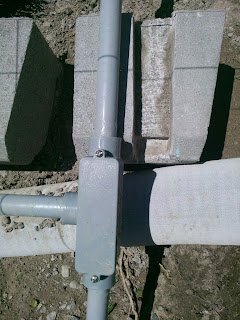 With the electric roughed in, I turned my attention to the plumbing. The pool lines need to go under the wall, and will eventually be run back into the pool shed. I used pieces of the Big-O pipe to make a 'subway' that allows the pool plumbing to go under the wall. The chases mean that if we ever have to replace the pipes, we won't have to take down the wall to do it. We have painted the top of the subway blocks with white paint in case we need to find the spot again someday. 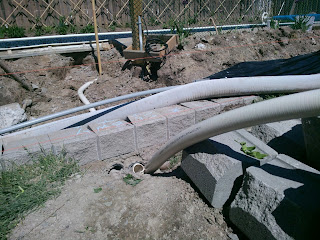 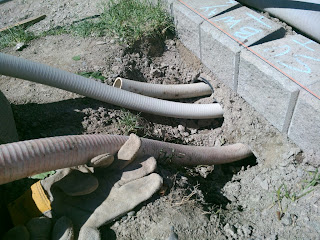 The trickiest part of all this was getting that base layer flat and even all the way across. I'll post a video shortly that shows how we did that once we got a good technique down.
Posted by littleboatiris at Monday, May 27, 2013