This year our family took a WHOLE WEEKEND to celebrate Canada day. I think it is only the second weekend this summer that I didn't work on housey projects and the break was very nice.

The weekend officially started on Friday night when Chuck and I headed down to the boat and loaded it up with stuff. 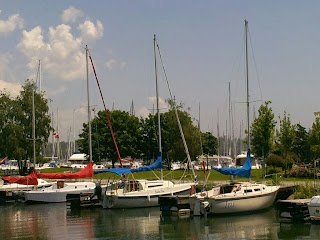 Since it was very late and we were very tired, and there were storms in the forecast, we went straight to bed after everything was aboard, and promised ourselves an early start on Saturday morning.

Among the supplies and provisions we brought aboard were all the usual boring stuff (clothes, food, beer) and 2 very critical items - a 2.2 kg brick of red licorice, and a plastic clamshell of 40 two-bite brownies.

On Saturday morning we got up at oh-mi-god-its-early and slipped out of the harbour while the world slept. There wasn't a breath of wind on Lake Ontario, so we didn't even think about raising a sail. In fact, we left the sail covers on, and didn't even bother to get a jib anyplace near to ready. 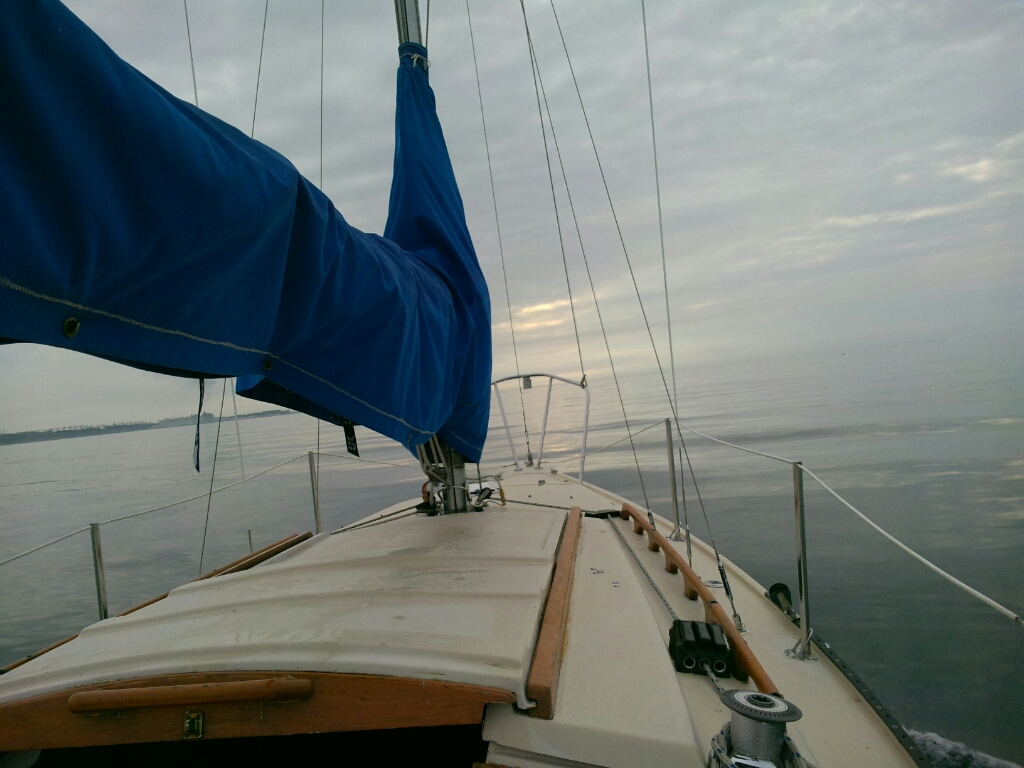 We nosed out of the breakwall behind another boat headed out for the long weekend, got a mile offshore, set compass course for 90° magnetic and puttered along at 5.5 knots for the next 6 hours, munching on licorice and brownies the whole time. I drove, and Chuck rested, then Chuck drove, and I rested. 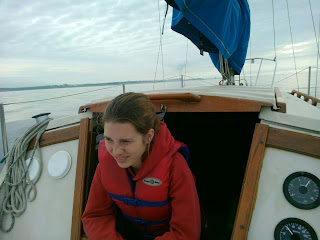 Lake Ontario's shoreline is a mix of high sand bluffs, industrial uses and small farms as you travel to the east. The scenery was nice, but not remarkable. Being out on the water was a really nice break. 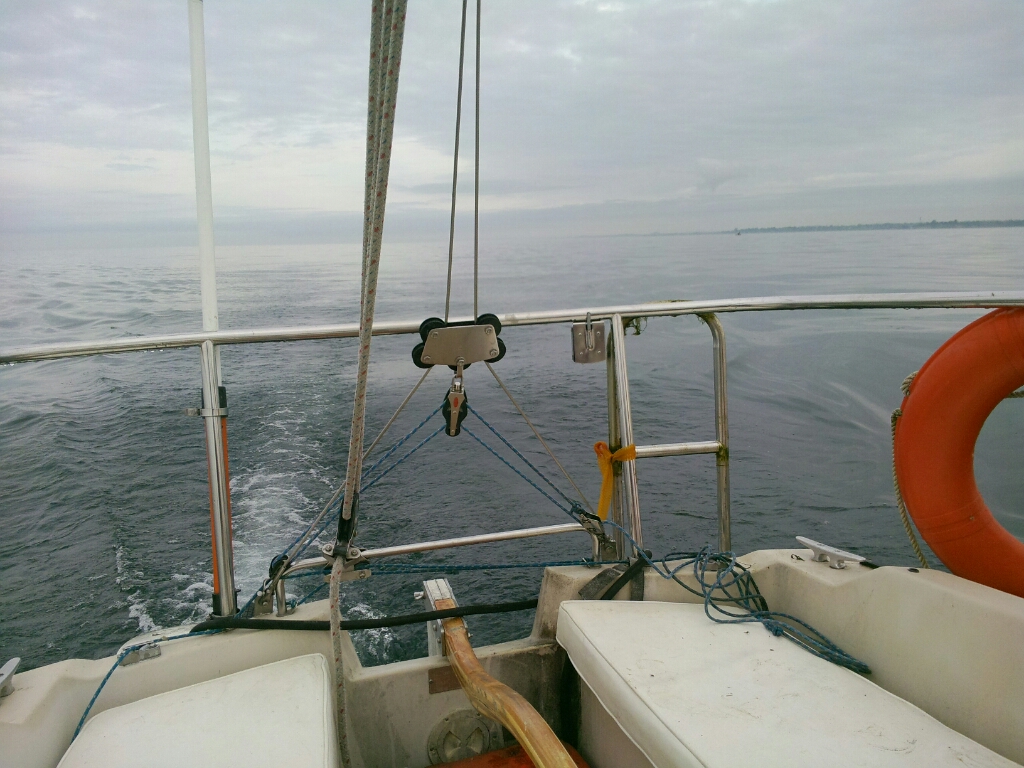 Eventually, we reached the town of Cobourg. And these guys scrambled aboard and found our licorice stash... 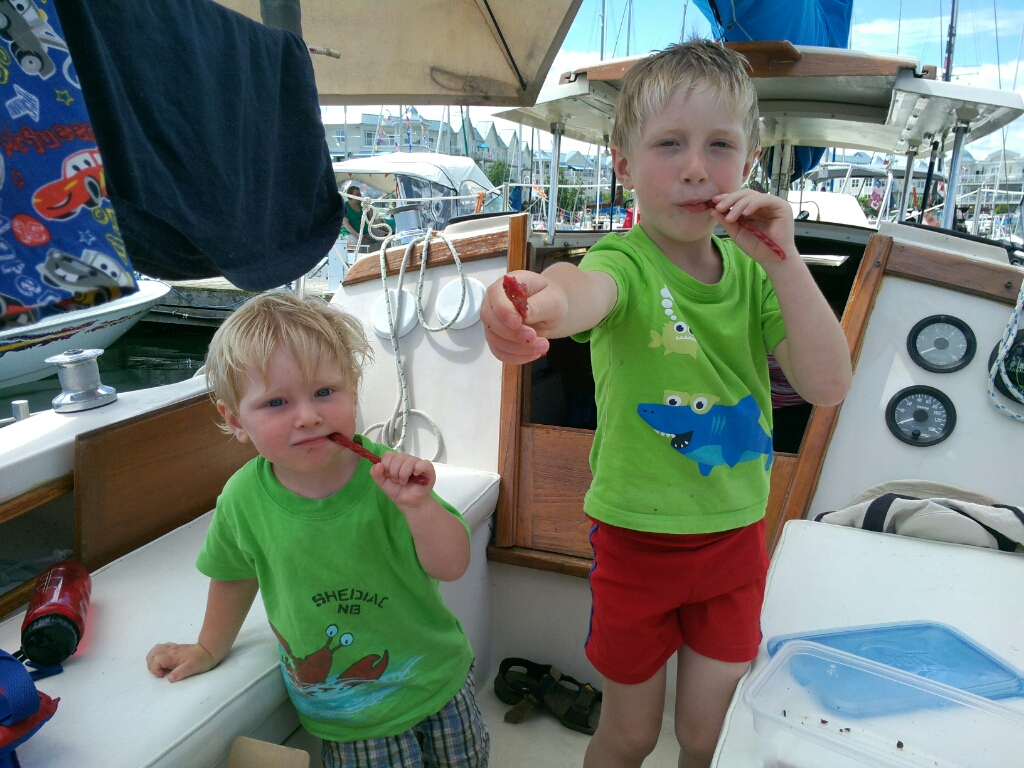 Of course, Mama came with them.

A bunch of other boats from our club were also there for a cruise event, so we met friends for lunch, and shared stories. It was a great day. 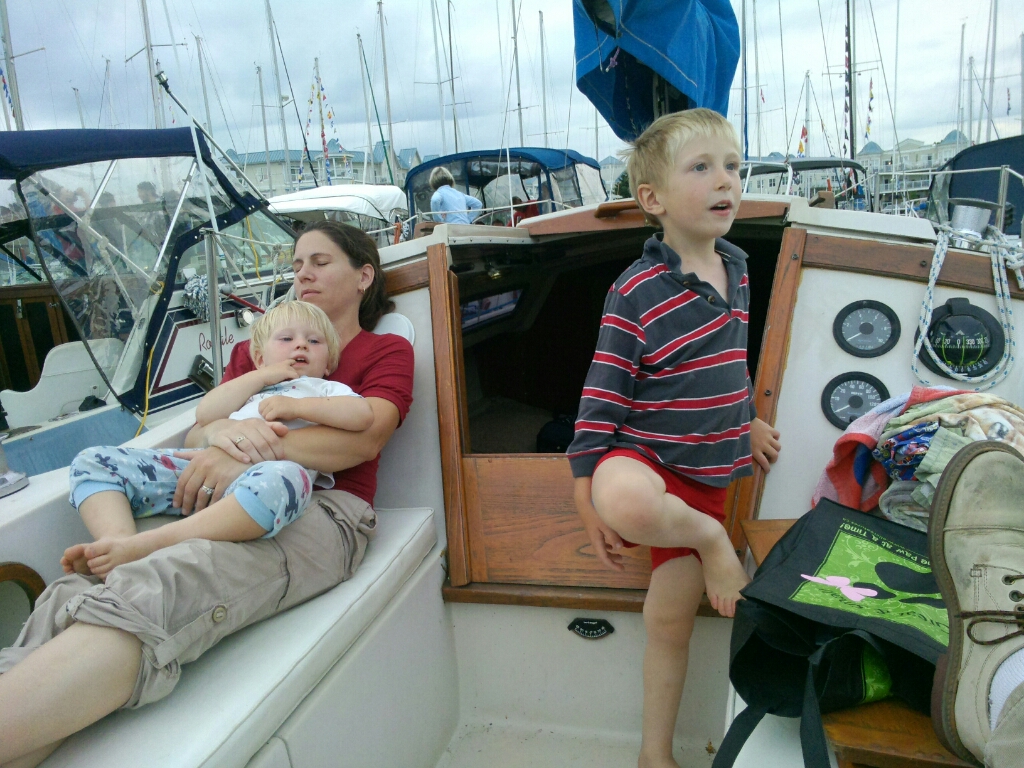 Cobourg is an older historic town settled by United Empire Loyalists way back when the USA and Canada were at war. The USA ordered any families loyal to the UK out, and the nearest British soil was here. There are a lot of beautiful old homes and a historic jailhouse (converted to a restaurant) I should have gotten pics of all the history, but I for got my camera on the boat every time we went out.

Cobourg's marina is separated from a beautiful sand beach by a big breakwall. You'll never guess what was on the breakwall, right next to the marina where we stayed... 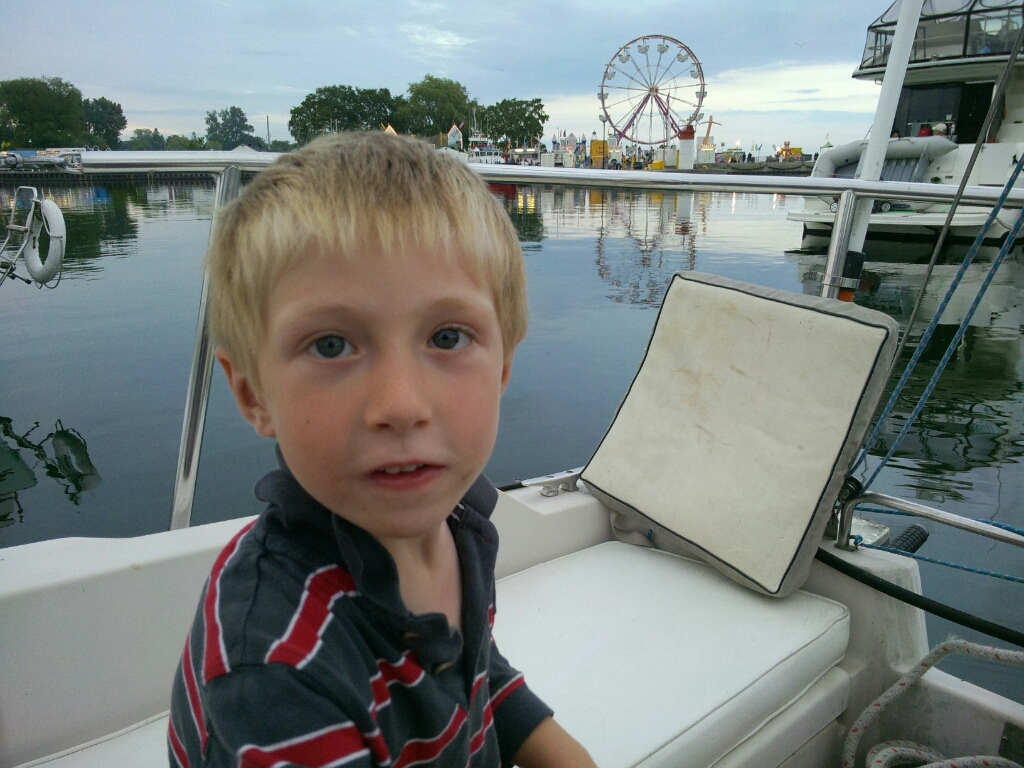 Oh, and we spent some time pretending we were sailing off to the end of the world... 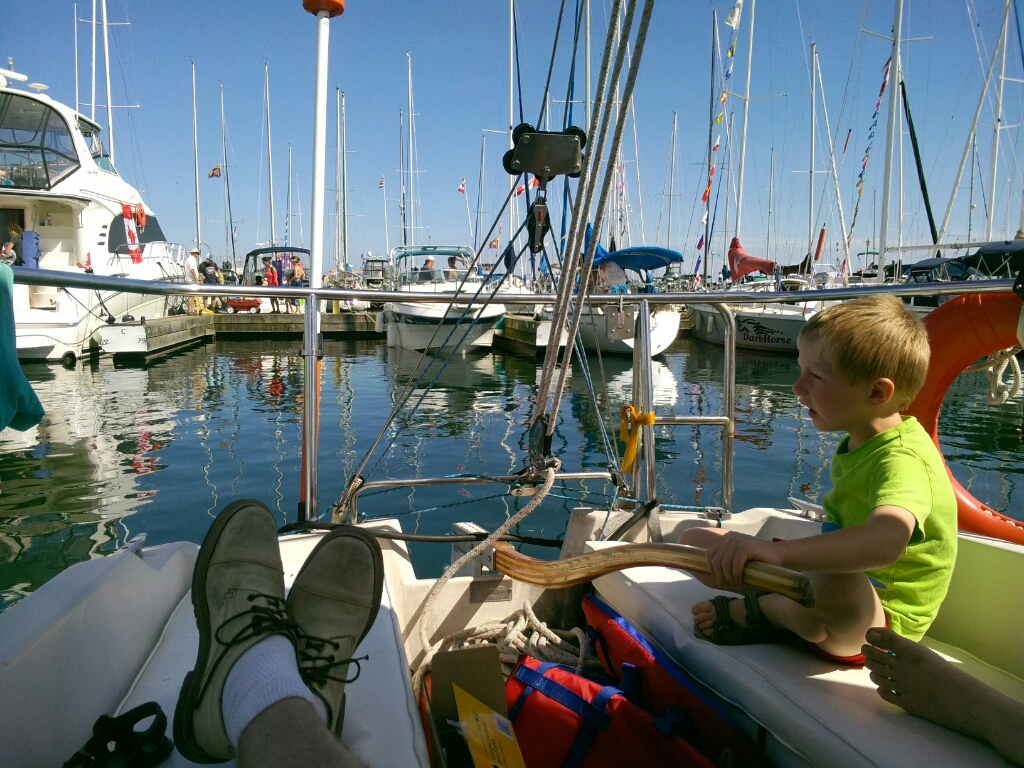 And at bedtime we said goodnight to the rides and games before we went to sleep. 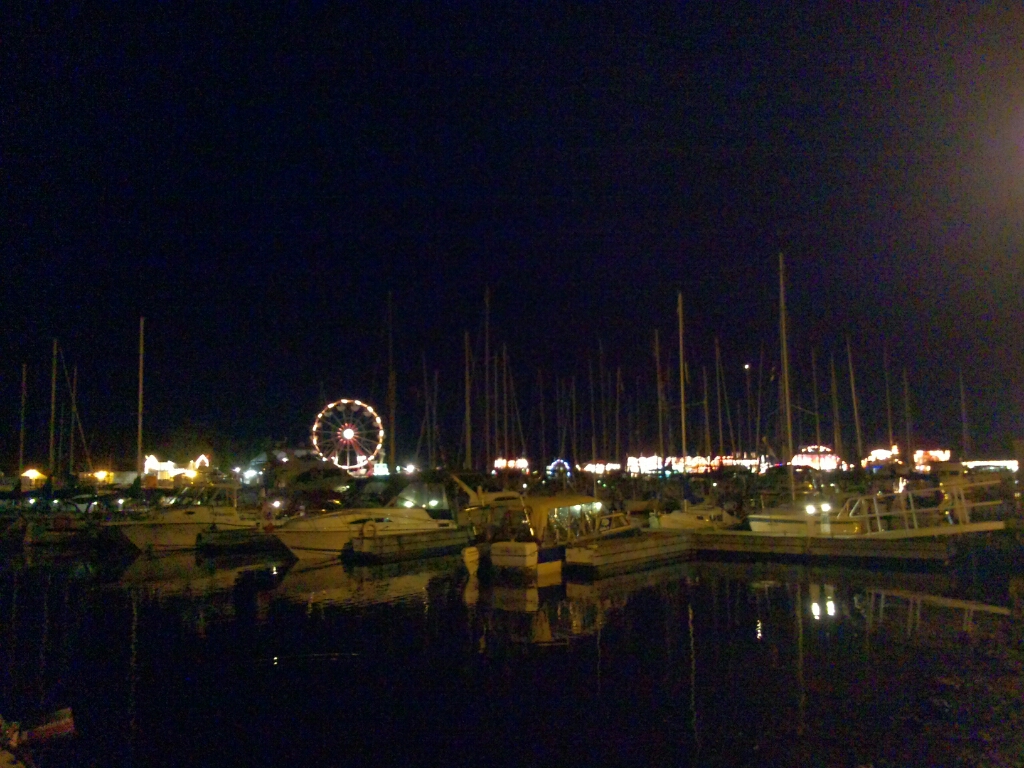 After the weekend, Chuck's book was done, so we headed home. 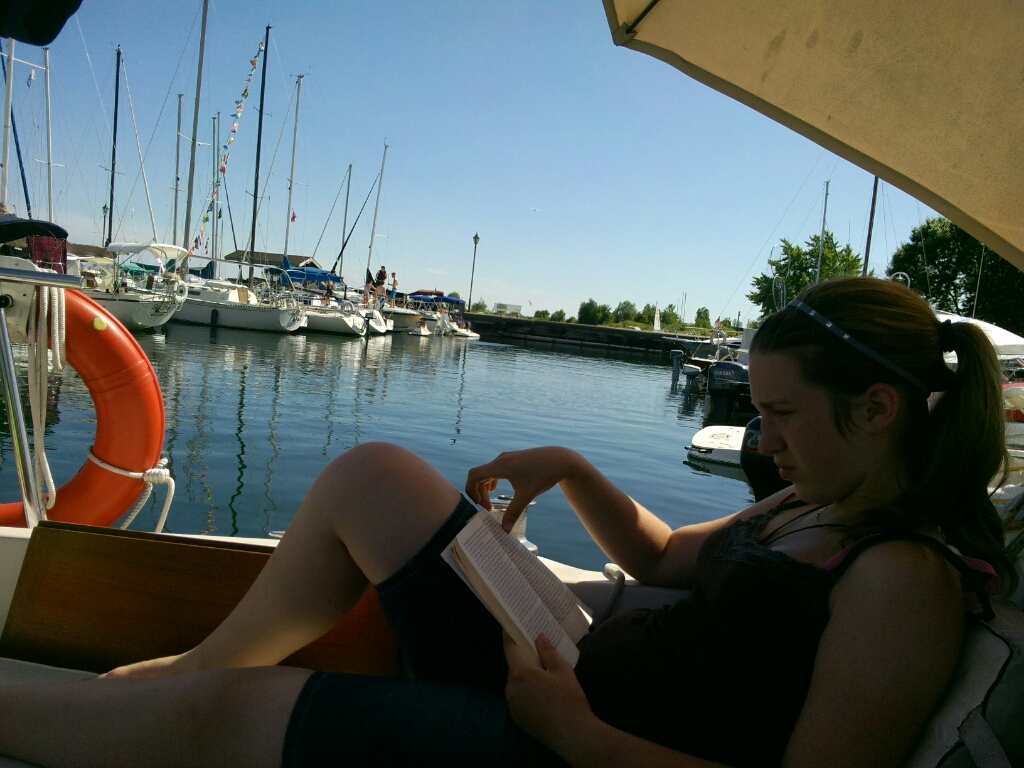