Last spring I installed a faceplate with a Stereo and new power distribution panel. I feel pretty good about it and it all works great. OK, now it works great. A year later, and after a redo.

The trouble was that the cheap $25 stereo I had installed had no volume control, ate CDs, and didn't play nice. This spring I saw another stereo on sale at West Marine, so I snagged one, and put it in place of the older cheapo. I figured it would be a quick swap and I would rock out on the lake. Alas, nothing on the boat is that simple.The first challenge with the install was that he connectors on the new stereo weren't the same snap-together link that was on the old one. I had to cut wires and put on new crimps. That meant removing the cupboards. New crimps and new wires were put in place, and I switched on the stereo and listened to the sound of silence. Not the Simon and Garfunkel tune, the real deal.

A little head scratching and some switch throwing later and I was no further ahead. I let things rest for a while.

Days later I climbed back onto the boat, ready to return the 'faulty' radio. When I went to pull the wires, though, the radio came to life. Weird. I tried a few things and found that by holding all three power leads together, and applying them to the red lead from the panel I got the juice I needed. Aha. I had a bad crimp before, and the radio wasn't faulty at all. When I let go of the wires though, one hit the radio bracket, arced, and I lost a fuse. Dammit.

In pulling the fuse from the original distribution panel, the plastic fuse holder fell apart in my hand. Double Dammit. It was time to replace the panel.

I made a call to The Binnacle out in Halifax, and had them send me a new power distribution panel. While I was at it I got a few other supplies for our spring tune-up. When I got home on Thursday, everything was here waiting for me.

Yesterday Chuck and I went out to tackle the install.

The first step was to remove the old wiring in order to put in new stuff. Since the cabinets were already pulled, getting the radio out and prepped was easy. Step one. Pull out radio: 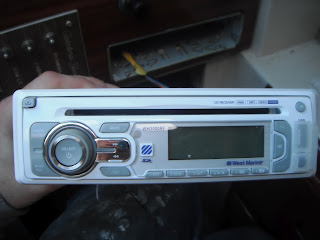 With the Radio removed, it was time to tackle the whole power distribution panel thing. Back in 1984, the panel was fine, but in the interim, a number of fuse holders have disappeared, the plastic retaining nuts on the switches have become failure-prone, the master power light on it has disappeared, and I generally lack confidence in it. Today it looks like this: 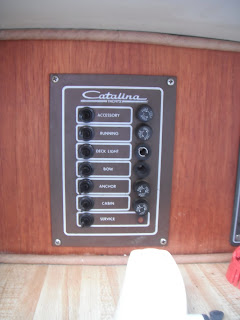 The first step to doing this was to descend into "the dumpster" to remove the accessory circuits from the back of the panel. Those who have been aboard Iris know the dumpster as the storage locker at the bottom of the boat where much ugliness resides. It looks like this from above: 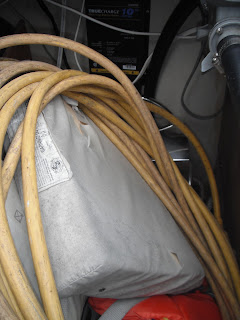 If you look carefully at that picture, you can see a black box with a yellow stripe of text across it behind all the other stuff in there. Well, the distribution panel is just above that black box. Chuck and I removed a lot of stuff from the dumpster before we got started on the electronics. I left the fenders down there though. They were kind of comfy to sit on. When you are working in the dumpster it is hard to smile. You get a look like this: 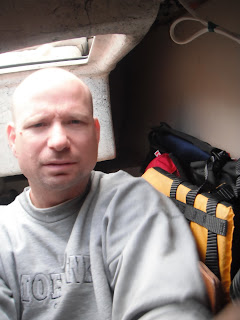 Once I had space to get in there I could get a the back of the old panel and start pulling circuits. I had Chuck turn the battery switch to the off position, then it was quick work to pop off the wires. All I really needed to remember were the position of the negative bus cable - which was an easy trace since the buss was right next to the panel, and the positive feed from the battery - also easy to identify since it was the fattest red wire of the bunch. The old panel looked like this before I took all the wires off. Remember, 3 of those switches are actually dead, and the master light at the bottom is busted: 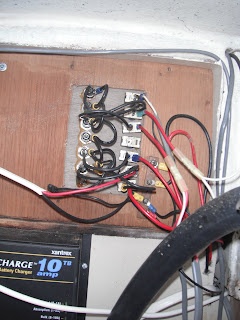 An interesting aside for my fellow Catalina sailors, the back of the power panel was marked "C-22, C-25, C-27" Apparently the same panel was used for Catalina 22, Catalina 25, and Catalina 27 models. I find this interesting as I would have expected a 27ft boat to need way more circuits than a 22, but it is likely that the economy of scale in buying the same part for multiple boats made good business sense.

With the panel unwired, the next step was to fasten the new panel in place. As you can see in the photo below, the new panel is smaller than the old one. That is OK though. I need to put a lighted master power switch in front of it, so I will be making a mounting plate for the new power panel similar to the one I made for the stereo, and putting the master switch in it. That can wait for a while though. My primary goal in this project is to get the panel wired in and running. Here is the new panel in place, but unwired. 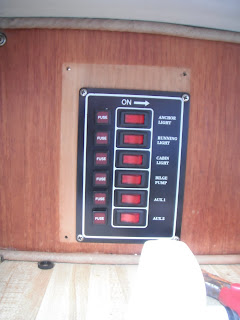 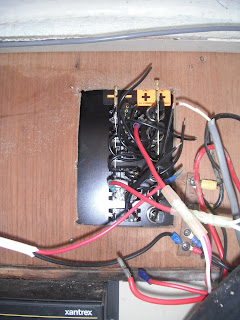 As you can see, the new panel has big positive and negative signs on it so it is super easy to wire. Only problem is that this exactly opposite to how the previous panel was wired. I need to either swap out the position of the positive and negative stickers on the panel, or reverse wire everything. I tried the wires both ways and they don't seem to mind. Once I get more accessories wired in, I'll have to see if they mind the reversed polarity. If they do, I'll swap out the position of all the wires, but for now, it is what it is. I am counting on some electronics friends to chime in with why this is a bad idea. Go ahead guys...

If I swap everything then what is currently my negative buss will become a positive buss. You can see what I mean in the pic below. Here I have wired up the panel and its existing 4 circuits (Stbd gauges, Port gauges, Stereo, Autopilot): 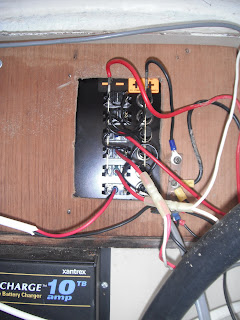 In the weeks (months ??) to come, some of the gauges will be reassigned and some new electronics will come online. As that happens, circuits will fill up on the back of the panel with the addition of a permanent home for the GPS and fish finder, and removal of the wind speed & direction gauges. But in the interim, everything is running fine. We even listened to some of Chuck's tunes to make sure. Did you know they swear and say "booty" in the music our youth are listening to!!

An edit - I have been asked what I did about the latent power usage of the remote and stereo when they are turned off. The milliamps sucked up by the memory features and remote on can add up to an already starved battery on a longish cruise or what have you. My solution was no solution. Being aware of the problem before installing the unit, I figured I could either leave the remote and memory wire unhooked and just ignore the problem, or I could wire everything to the switched lead, which is what I did. I doubt I'll be listening to radio stations much on this unit - my bigger goal was to have the ability to listen to CDs and MP3s while aboard. 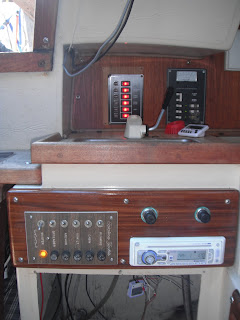 Posted by littleboatiris at Sunday, March 18, 2012