I don't have much to update project-wise this week, mostly that is because this week has been consumed with cheering on our Olympic Athletes. Canada has had a great Winter Olympics in Russia, despite the challenges that the events and venues presented. Each night we sit for a couple hours watching the recaps of the day's events. Some of the performances have been truly awe-inspiring, while some have been heart-breaking. We recorded the hockey games and thoroughly enjoyed top-notch performances by all the teams. Latvia and USA really gave us scares, but today's Gold medal match was just pure great hockey. its been a great games.

Project wise, I have a new build on the go. Its a little bit different, and a little bit fun. I am making an interactive number line to help the boys maintain their excitement with all things math.

To make the number line, I needed a few hard to get parts, among them icons for weather conditions and an indicator for what number we were talking about. To get those parts, I went to  a couple of my favourite websites. Stickers from Zazzle.com will be used for the icons to interpret the number values as tangibles, while a fisheye lens from dx.com will be our number indicator on the number line.

The plan is to build a holder for the numberline that will allow us to swap out scales for different tasks, and then mount the fisheye indicator on a sliding base that will allow the boys to move the selector around to pick the target number. Because of the Olympics, this build is behind by a few days, but I've managed to draft and build the framework of the project out of plywood left from a previous project, and am now working on the nuts and bolts pieces which will be made of White Ash, hardboard, and sheet metal. 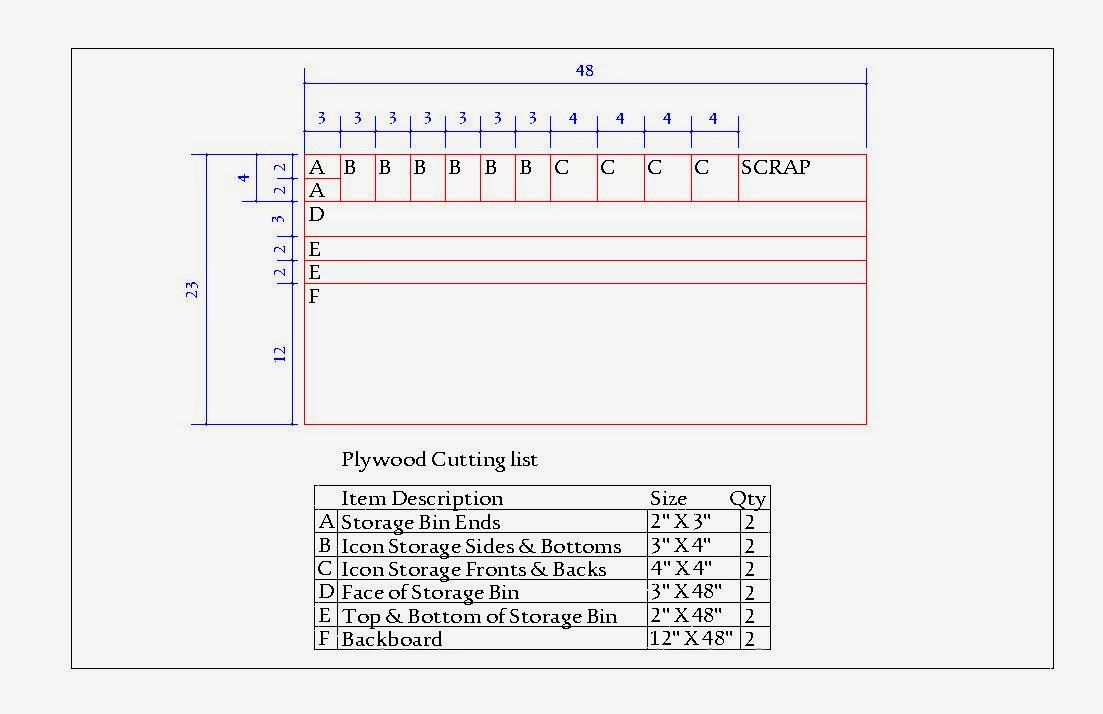 Since I had it on hand, I used a 24" by 48" sheet of 1/2" GBS Maple plywood for this project, but I think 1/4" would have been better. Whichever size you use, the cutlist will be the same. I tried to keep the cutting as simple as possible, so there are lots of straight cuts.

Parts A, B & C can be cut from a strip using a chop saw to avoid wrestling with a long strip on the table saw. These small parts will be made into boxes to hold the sticker icons. I just mitered the pieces and used tape and glue to clamp them up.

I followed the technique used in building my "whatzit" to assemble the storage boxes. The First step was to set up the crosscut sled to make 45° cuts, then using a scrap of hardwood as a stop, I trimmed the pieces to uniform size with matching mitres. 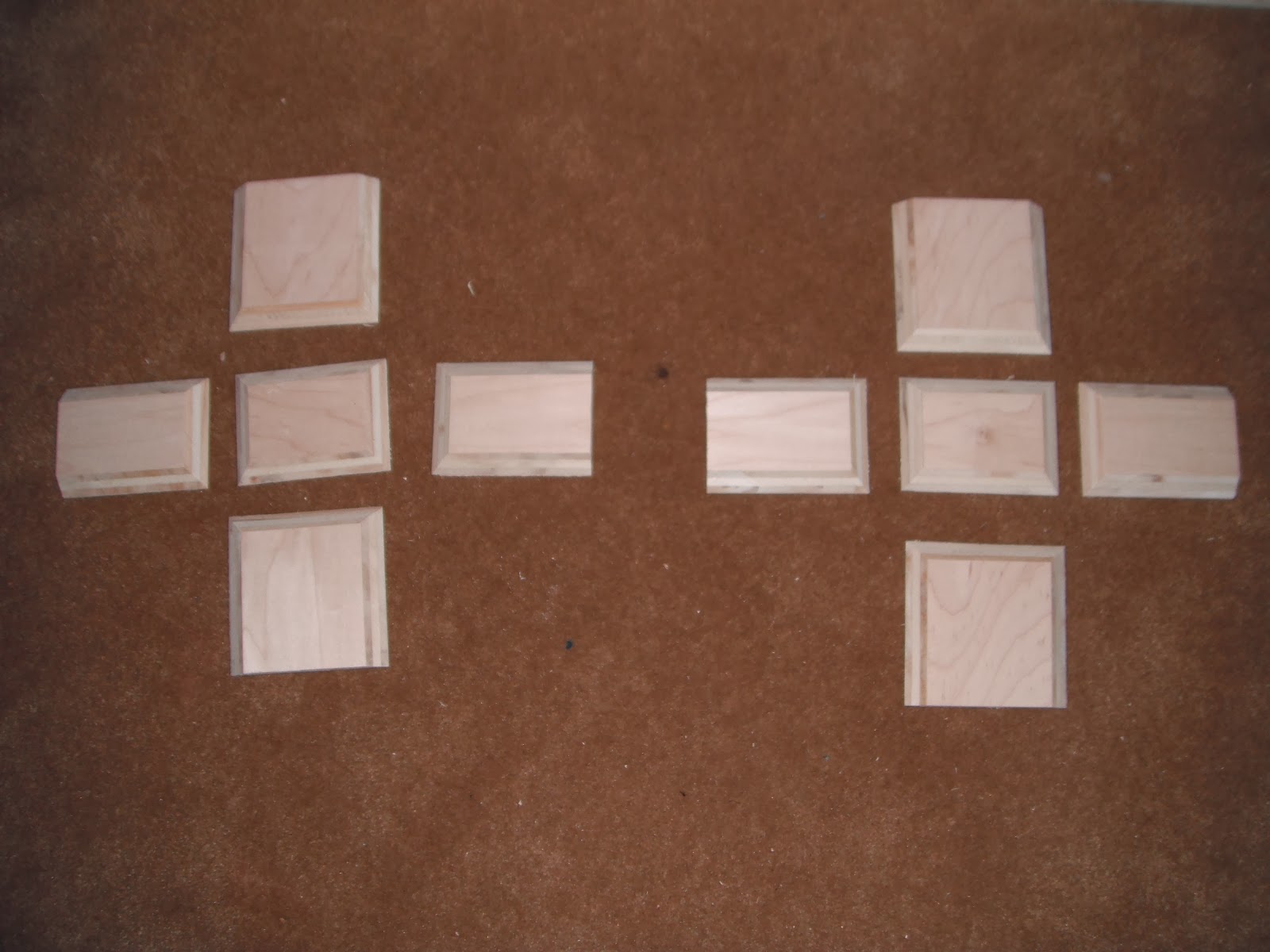 With the sides mitered, I used blue (removable) painters tape to dry fit the cubes. Once everything was lined up nicely I applied carpenters glue and taped the boxes together. 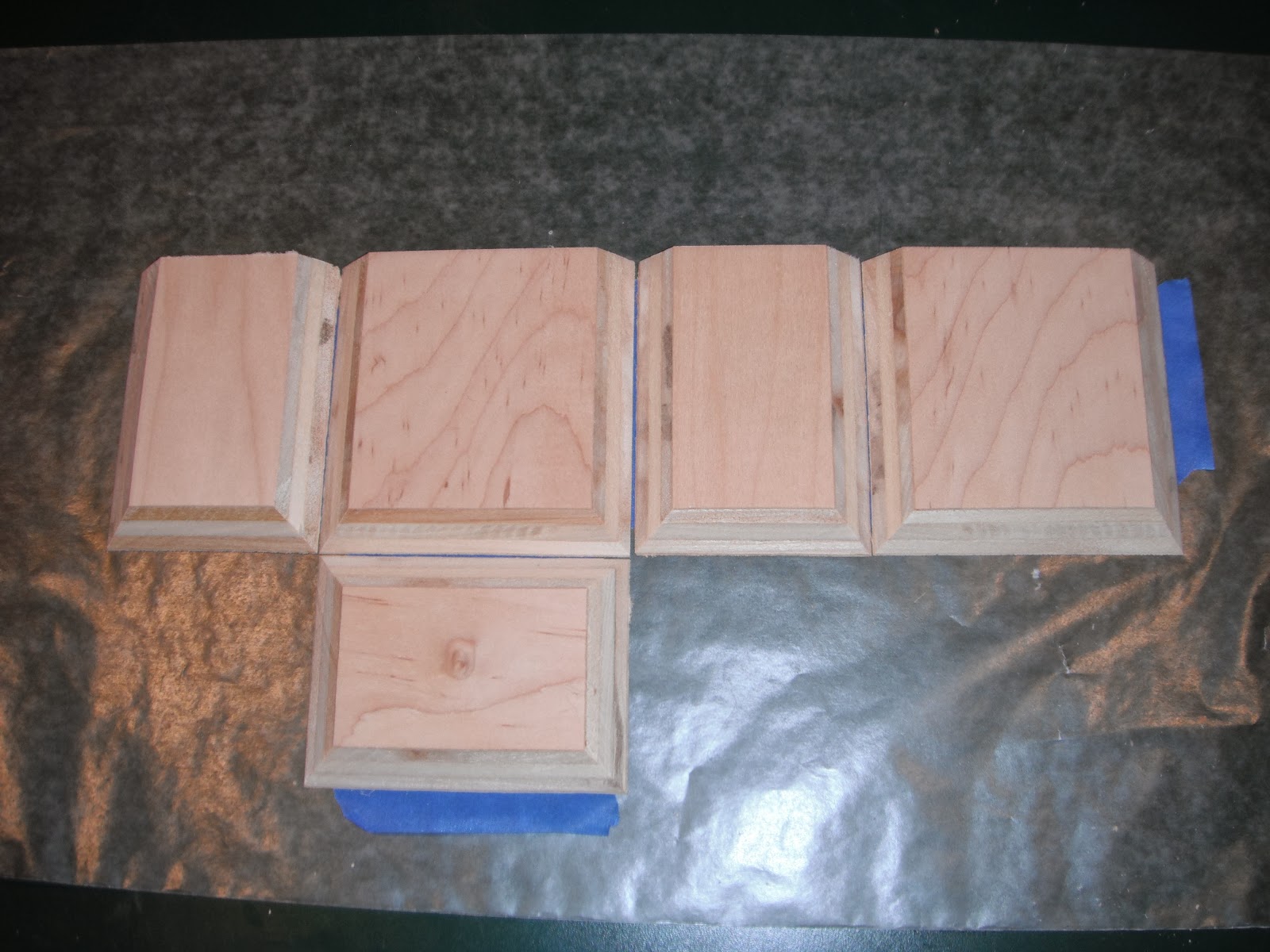 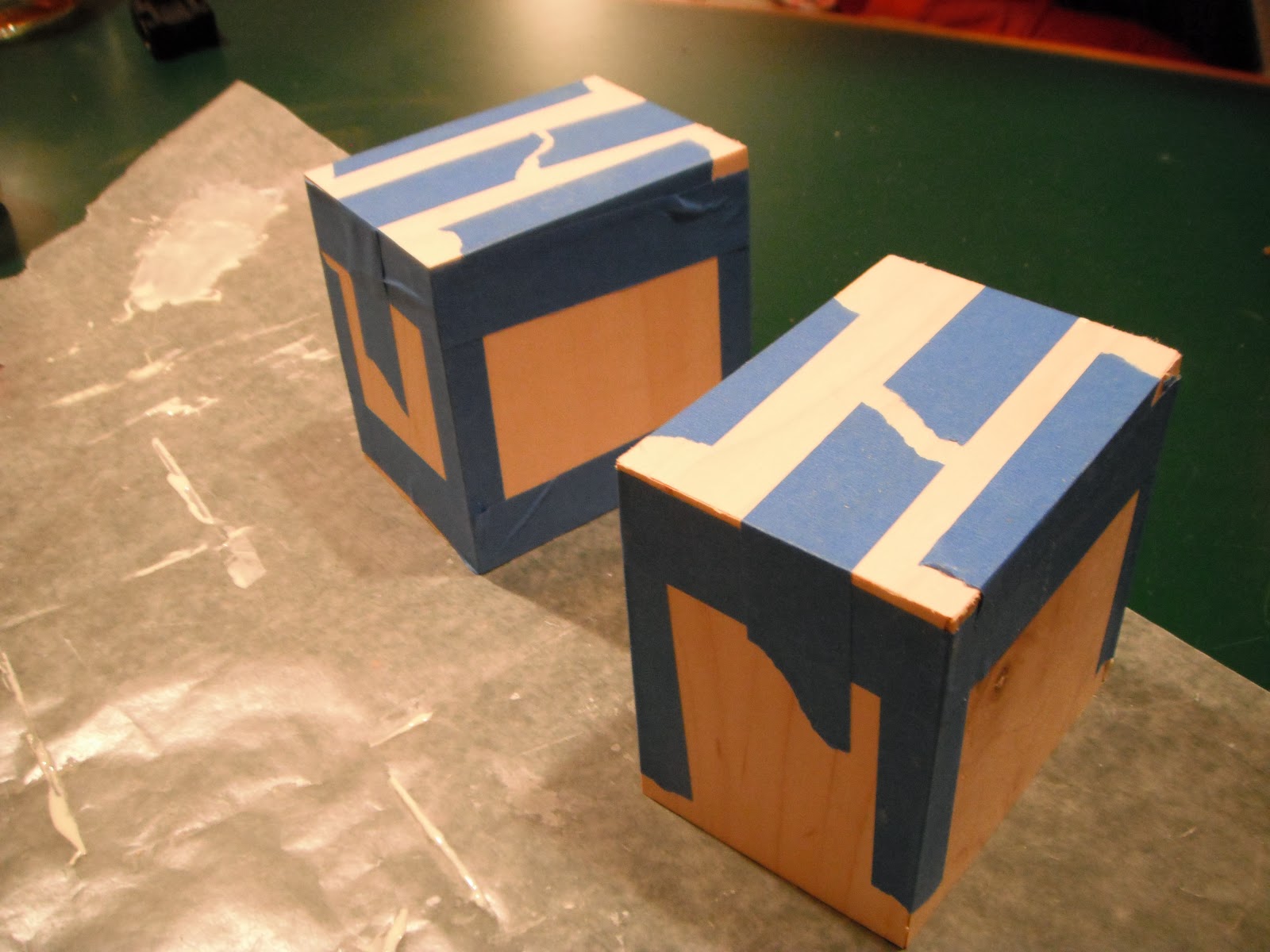 The boxes sat overnight drying while I got biggest piece (backboard) ready for assembly with the number line storage pieces.

On the backboard I cut 2 dadoes 1/2" wide and 1/8" deep to receive the top and bottom of the storage bin. The dadoes were cut so that one is along the bottom edge of the plywood, and the other is 3" above the top of the first, this will allow part D to act as a filler. I later realized that by using the number line rail as the front of the box, Part D wasn't needed. Two small square blocks trimmed to fit from 3" X 3" pieces form the ends of the storage bin. 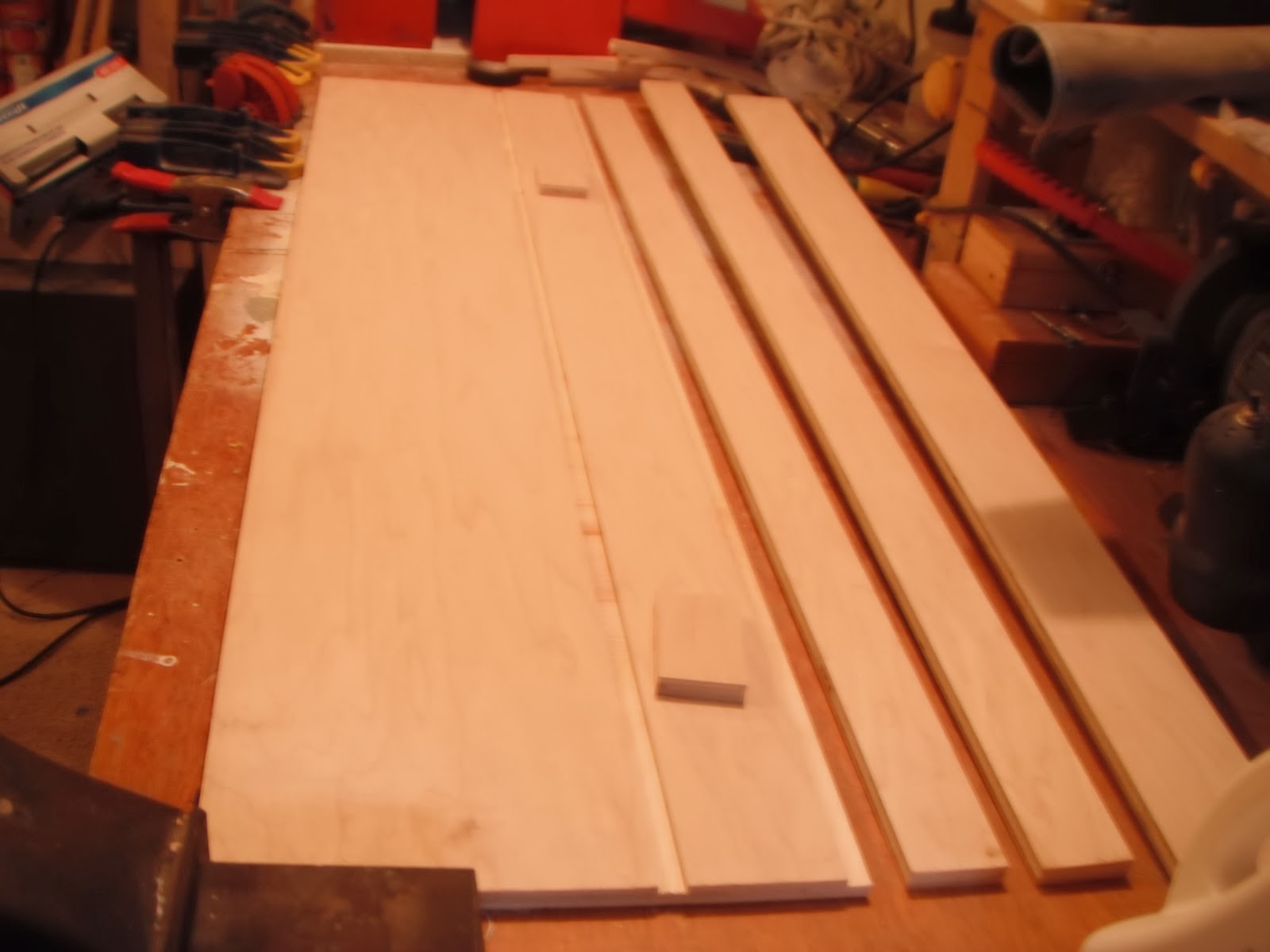 Here is the backboard being drilled to accept small wood screws to hold the top and bottom of the bin in place. For assembly, I ran a bead of glue in the dado, then applied 3/4" wood screws every 8" or so. 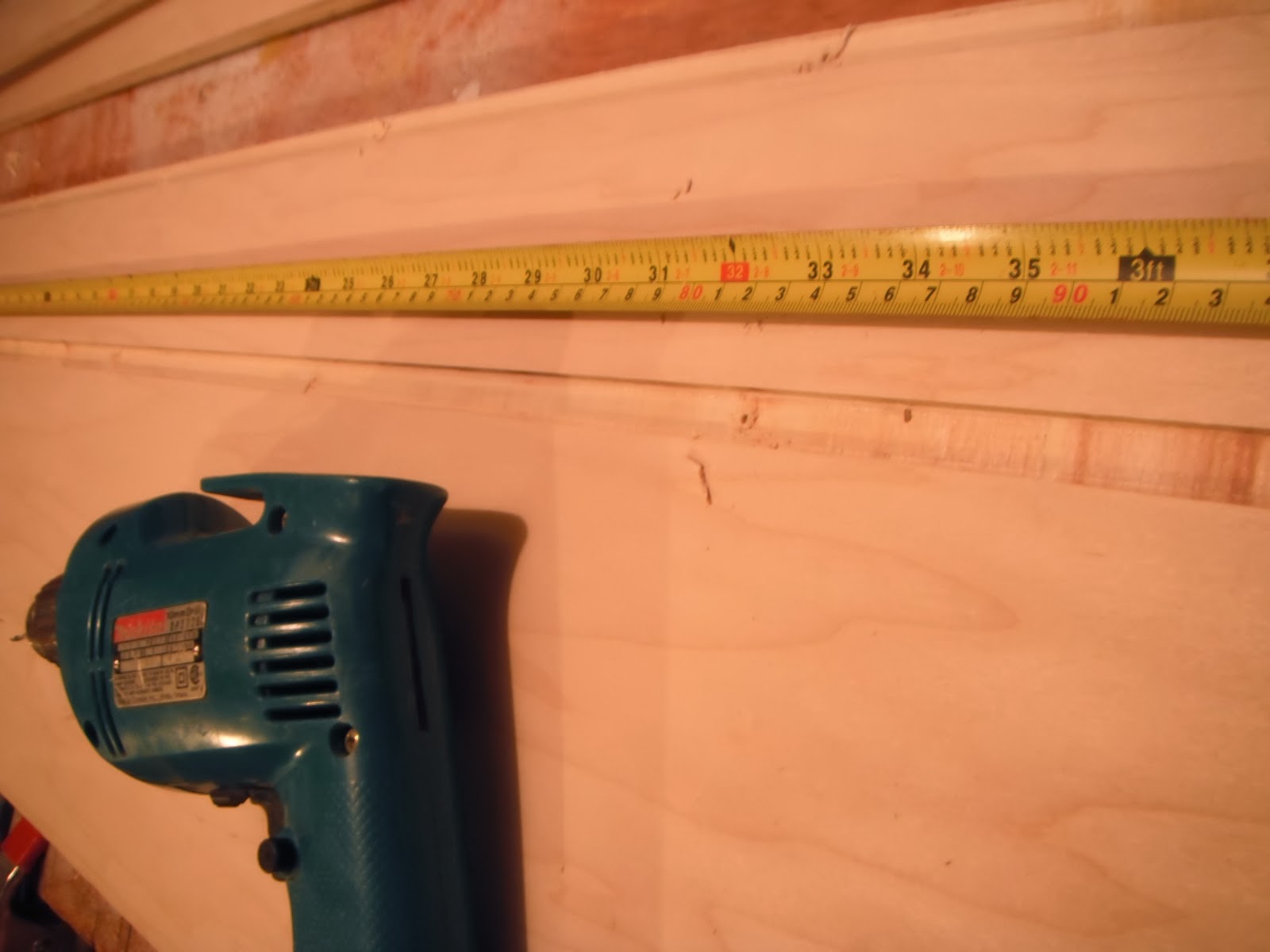 After gluing and screwing, the end blocks were a very tight fit, so a little glue and clamping was all it took to set them permanently. 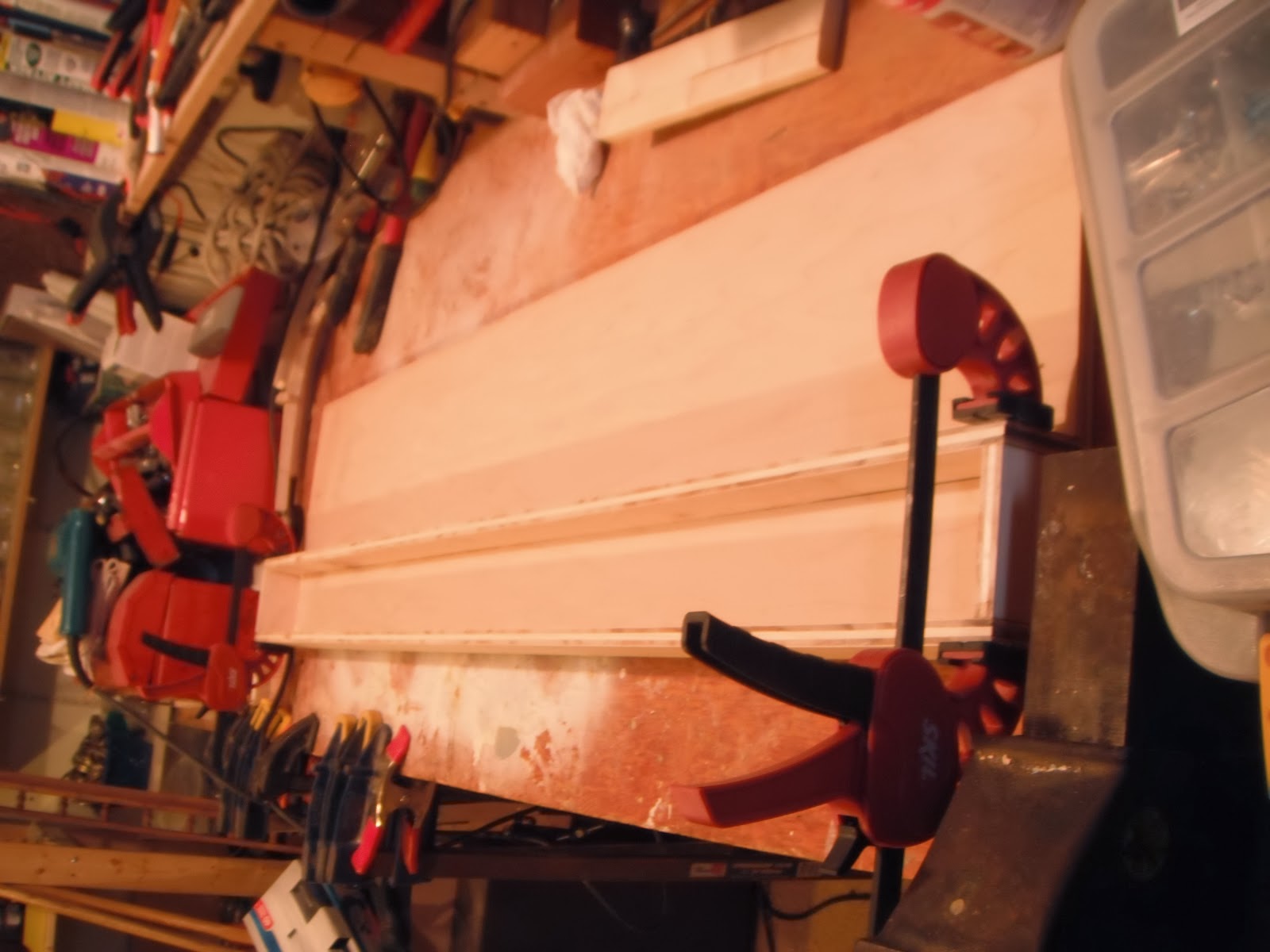 The hardest part so far was getting the bench cleared enough to fit the work piece. I have way too much junk lying around! 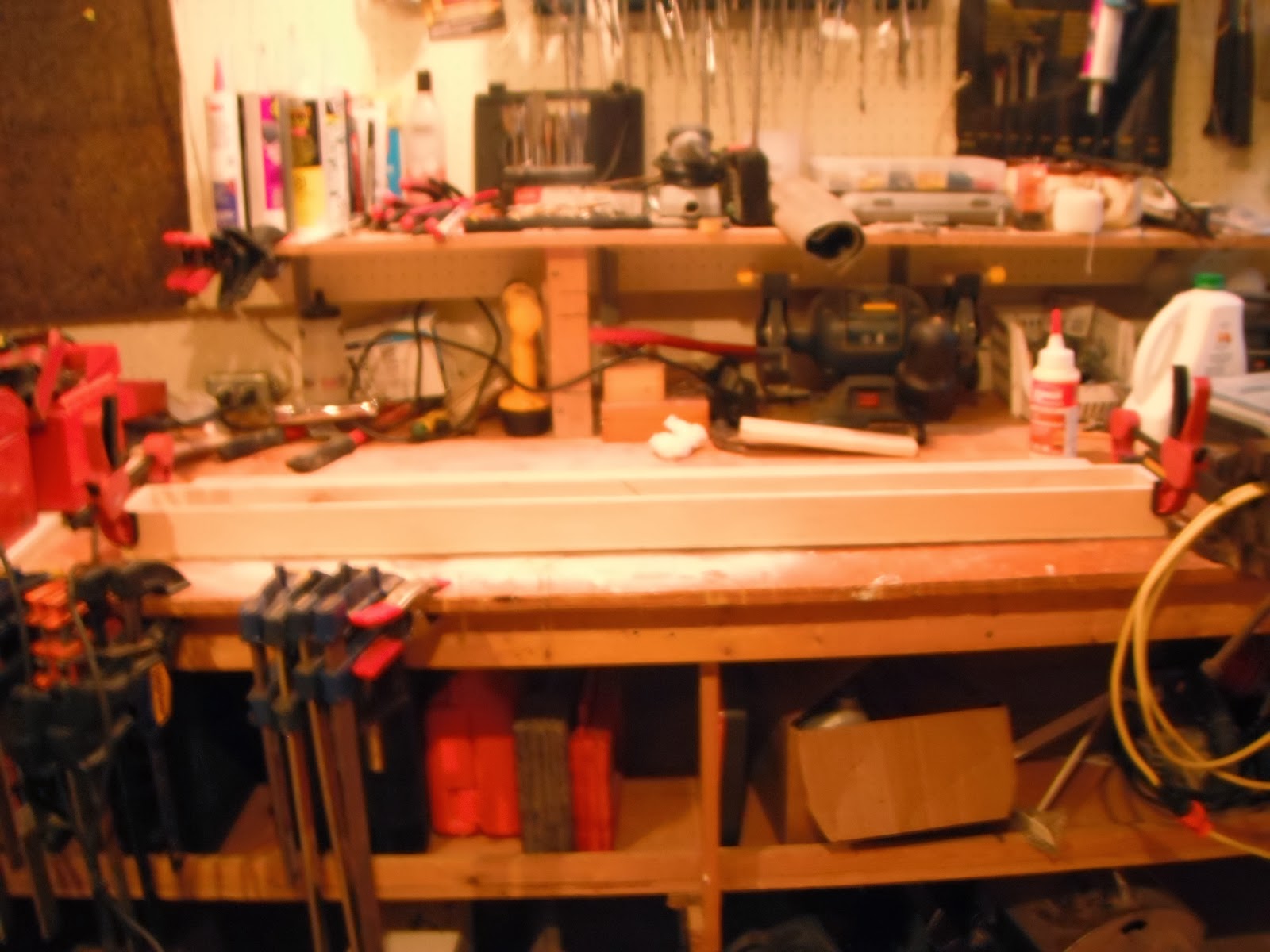 The plywood parts are now complete, waiting for hardboard and Ash pieces to be built. Tune in later for the next steps. I have started the number line rail, but I need to get out to buy a router bit in order to complete it. The hardboard parts should be much easier to make, so I may jump to creating them in the interim.


Posted by littleboatiris at Sunday, February 23, 2014