Currently being referred to as "The manger." 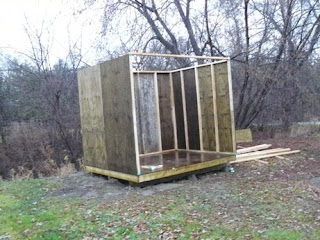 We've been talking about this for a few weeks now. We even had the deck blocks in place, the floor decking bought, and the support joists already framed up.

BUT, before we could begin, we had to level the deck blocks, something that neither of us was looking forward to. Last Sunday, we were listening to the weather, and realized that it will probably snow towards the end of the week, and we really, REALLY need to get our wood for the winter off the ground.
We've previously stored it under the deck, on skids, but it was getting very very wet under there, so we needed another option.

Since Sunday was a beautiful day, that afternoon we started digging to level the blocks off. The blocks got levelled, and the support beams placed. The joists were already built into a frame. We placed the floor joists on the support beams, and attached them together. Well, WE stated attaching them together, then I hammered my thumb REALLY HARD, and retired for the day. Hubby finished attaching them, and put the floor decking in place.

Then Tuesday night, Hubby built the frames for the first three walls, and I held them up while he attached them to the frame and together.

Hopefully in the next couple of days, we can build the front wall, and figure something out for the roof, whether its a proper 'lean-to' type roof, or just a tarp for this winter. Until we have at least part of a fourth wall, we can't start filling it with the wood, because while the two back corners are very sturdy, the front two corners are still a little wobbly, they need the structure of the last wall.

Right now, we think it looks like we're building a life-sized nativity scene!
Posted by Star at Sunday, November 29, 2009