Last night, Hubby, myself, my Dad and Little Raven went to the Leafs game.  Not only was it Hockey Day in Canada, it was Sundin's return to the ACC after going to the Canucks.

I found it interesting that Sundin was given a standing ovation during the video tribute to him (He did spend 13 years here), but every time he touched the puck, he was boood, lol.

Well, the Canucks tied it up towards the end... we went to overtime, where I think that the leafs may have forgooten to try.  What, we have to put the puck IN the net???  who knew??  And of course, in true Maple Leaf fashion, lost it in the shoot out.... and the winning goal was scored by.... you guessed it... Sundin.  Dang!  Do I cheer, do I boo.... I dunno what to do!!

It was a good game, and it was the first time that Buddy Boy had been left on his own, without Mommy, Daddy, or Big Sister around.  He tayed home with Grandma!!

Little Raven says "Thanks for the tickets Uncle Steve & Uncle Mike!!!"
Posted by Star at Sunday, February 22, 2009 No comments:

Buddy Boy and I have been going to swimming lessons for the last few weeks. He absolutely loves it!! 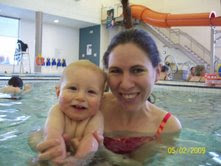 The first lesson I put a lifejacket on him and let him float on his back. Well, he started kicking his legs and moving away from me. I've dunked him many times now, he just laughs and smiles. The instructor told us that when we dunk the babies, to always count 1... 2... 3.... Go!! bobbing them up and down on the numbers. Well, when I start counting, he starts to grin, he knows that he's going under! I lift him up and put him under in a kind of swoop, so that he goes head first... that way, the water goes across the bridge of his nose, if I put him down, then it would go up his nose.
Posted by Star at Thursday, February 05, 2009 No comments: