A Room With a View

Iris, and every other Catalina 25 and Catalina 27 that I know of, came with a deadlight mounted in the foredeck. A deadlight is a sort of skylight which has been used aboard boats since back when Columbus was around. There is a difference between the Santa Maria and Iris though. When the Santa Maria was fitted with her deadlights, a craftsman carefully formed a prism of glass which would scatter light throughout the chamber that the deadlight was in. Not so much the case with Iris.

At the Catalina factory, they fitted Iris with a deadlight of milky white Plexiglas, fitted to a cutout in the fibreglass deck. This deadlight has some common complaints from Catalina owners. The lights have a reputation for leaking, cracking, and generally not playing nicely with others. Catalina attached the deadlights with a bead of silicone sealant which was also famous for degrading in sunlight, and then being impossible to remove. Iris had symptoms of previous fixes, but the deadlight still leaked. I called the previous owner (PO) to find out what had been done, and if I needed to know anything before venturing to fix the problem.

ME: hey PO. When we sleep aboard Iris, SWMBO gets dripped on since I won't sleep under the deadlight. You think I should fix that?

PO: Maybe. Does she like being wet when she sleeps?

Me: First time? You mean you had to do it again?

PO: Yeah. The fix didn't last long so I had to ramp things up a little.

PO: I got some silicone and gave that a try.

Me: How did that work?

PO: It worked for a while, but then it started leaking again. So I had to try something else.

PO: Yeah, I was getting a little frustrated after the first 2 attempts, so the 3rd time I gave it the 5200 treatment.

PO: Yeah, that's the stuff. Should never leak again the way I figure it. How does SWMBO like sleeping under there again??

So I was looking at a pretty daunting task to remove the old deadlight, install a new one, and doing it with materials that would allow me to revisit the problem next time the deadlight starts leaking (which it sounds like it may be next Tuesday). Speaking with the Catalina guys, they identified the deadlight as the biggest design flaw in the whole boat. Since the light is only 8" X 4" I am happy knowing there aren't any bigger issues.

In order to get the parts I had a couple options.

1) I could buy one online from Catalina direct for about $30 and then pay shipping and duties to get it home.
2) I could get a piece made from windshield glass for about $150 (I think the glass place thought I had sucker written on my forehead)
3) I could go to home hardware and get a chunk of Plexiglas and hope my skills as a craftsman were up to the task. (Lately they haven't been)
4) I could go to a local plastics place and get a part custom made.

I went with option 4. since this part is so small, I figured it was a good test for future endeavours (like having lexan hatch boards made up). Catalina yachts (Florida) was nice enough to send their shop drawing for the part to a friend, and I printed it and took it to the plastics place with a few customizations marked on the drawing.

The guy looked at the

drawing, and scratched his beard. Then he looked at me like he didn't want to do the job. "You are looking at $45 in machine time, and about $10 in plastic." I said go for it, and waited for the phone call saying the part was done. it took about 2 weeks, and the call came. I am super happy with the new part.

In the photo you can see the PO's old clear Plexiglas deadlight, and my interpretation of the design. I had the plastics place put a little bevel on the edges all the way around, and got the light made from 5/16" plexi rather than the original 1/4" thickness. This was a compromise between the aftermarket parts now available which are thicker to resist flexing, and the original parts from Catalina which the deck is recessed to fit. Some folks who have bought the aftermarket parts have had issues with parts being too thick to recess properly into the deck on installation.

My first step in the repair was removal of the old deck plate. I was super worried about the 5200 that the light had been installed with. I have never worked with 5200 before but it is supposed to be the worst stuff in the world to try and remove from the boat. Carefully, under the watchful eye of another sailor, I started carving the sealant away from around the light. Then I slipped the knife in between the Plexiglas and fibreglass in the hull, and the whole deadlight popped right out. The photo at left was staged after the light was removed, and you can see the old 5200 on the deck of the boat. most of it just peeled away from the gelcoat like there was no good bond at all between the materials.

I spent some time cleaning the mating surfaces, then it was time for the install. The new light was marginally oversize, so using a grinder with a coarse flapwheel in it, I gently ground around the edges of the new light until it fit the hole properly.

Earlier in the week, I had stopped in at "The Rigging Shoppe" our lo

cal(ish) chandlery during my lunch break and described the task at hand. There it was suggested that I try using "Boatlife" to bond the light to the hull. Boatlife is a hybrid caulk that isn't quite caulking and isn't quite silicon. It looks and behaves like silicon, but has the UV inhibitors of some of the other marine caulks in it. I goobered up the mating surfaces, set the deadlight in, and settled in to wait for the caulk to dry.
Rather than sitting around doing nothing, I went racing aboard Tecumseh, and by the time I got back, everything had set up pretty nicely. I left the bucket of water weighing down the plate overnight, and returned the next morning. Things looked good.

I dumped the water over the plate as a test, and the Vee Berth was not so much as dripped in. Here's hoping things stay that way for a while!
Posted by littleboatiris at Thursday, July 29, 2010 No comments: 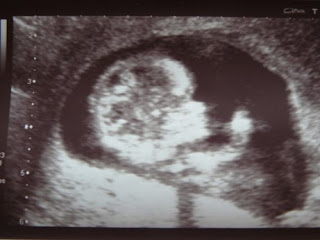 And, I fear that we have a little thumb sucker! 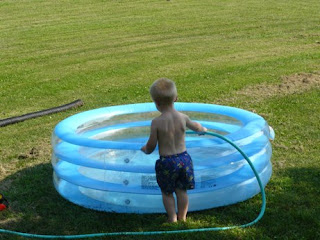 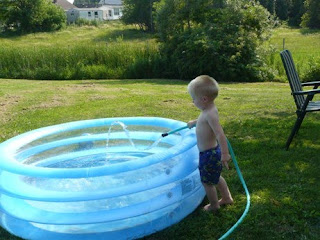 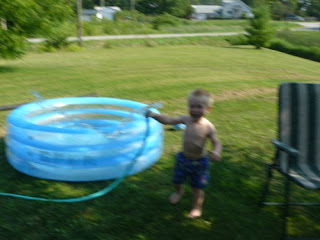 I'm gonna get you Mommy!! 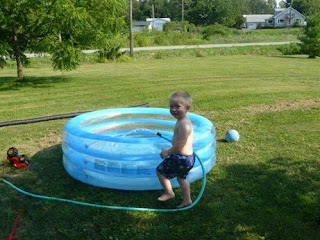 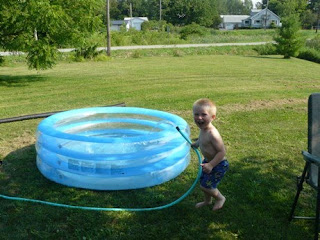 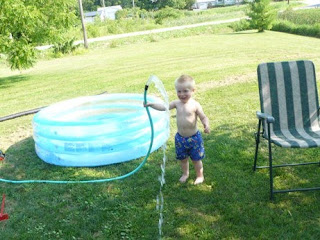 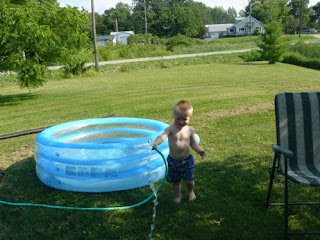 Hosted by Cecily and Serious Krystyn
Posted by Star at Friday, July 09, 2010 5 comments: