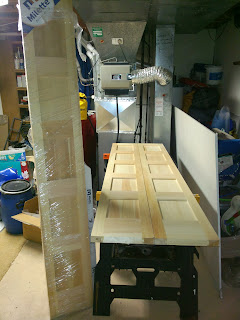 While shopping at Home Depot the other day, I picked up these closet doors for the boys' room. Now I need to stain and seal them. I already got a can of clear varathane, and I was going to leave them natural, but now I'm wondering if I should stain the pine. Or maybe paint the raised portions to match the other trim in the room. Hmm.

Posted by littleboatiris at Sunday, December 23, 2012 No comments:

Ever since we moved in here, an ongoing issue has been the lack of water pressure in the hot water at the sink in the master bathroom. Cold water rushes out, but hot barely dribbles. I would have tackled the problem earlier, but the way the faucet was hooked up, you have to turn off water to the whole house in order to service the faucet.

An hour's work, and that's all changed...

First, meet the sink. This bathroom is on the long list for a remodel, but kid and family space come first, parental space is way down the list. 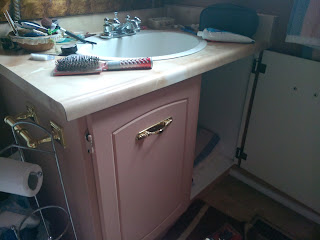 And meet the connections of the supply lines to the taps beneath the sink. Whoever installed these used a lot of solder, but they also used fittings that don't allow the lines to be removed without turning off the water to the house. You will also notice that they have used a prodigious amount of teflon tape on threads that do not have anything to do with getting a decent seal. this is a pet peeve of mine. For some reason, every spot where teflon tape could be applied in this house has GOBS of the stuff. At least they put braided stainless supply lines on. 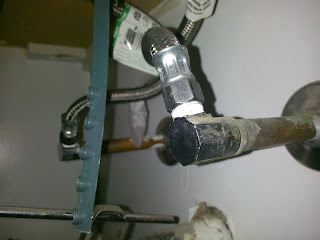 In order to turn off water to the house, I use the valve in the basement next to the water meter - you house likely has one too. You should cycle it every now and then to be sure its working right. Ours was, so turning off water was a non-event. With the house water turned off, I turned on the water on the lowest sink in our home (at the bar) and left the taps in the 'on' position. This will allow water to drain from the lines in the house. Then I went to the bathroom in question and opened the taps there. Now gravity (and a siphon) will drain the water lines so I don't get flooded when I unscrew the water supply lines under the sink. 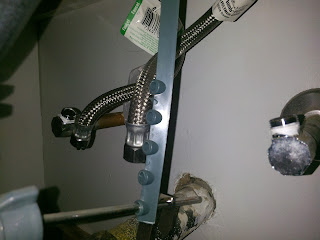 Using an adjustable wrench, I was able to remove the hot and cold water supply lines in a matter of moments. Now its time for the mini tube cutter. 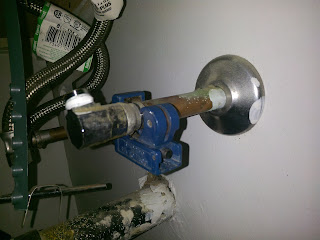 A mini tube cutter allows you to cut away a piece of pipe. In this case, I wanted to remove the soldered portion of the supply in order to replace the fitting on the end of it. I could have heated the pipe to remove this, but then I would have had to clean off the solder, and this was easier. The way the tube cutter works, you set it over the pipe, and tighten it in place until there is resistance if you try to roll it around the pipe. Now you spin it around the pipe until there is less resistance, then tighten and repeat until the pipe is cut through.

And when the pipe is cut through, guess what you find inside it... 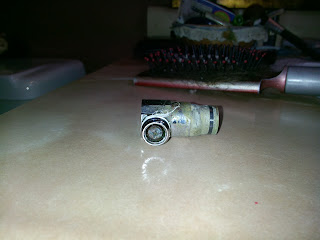 Apparently at some point in the distant past, a screw found its way inside this fitting, restricting flow to the sink. Can you see it inside there? Now I know what was wrong with the faucet!

With the end cut off the pipe, its time to start the cleanup process. Using some 220 grit sandpaper, I clean the ends of the pipe of any solder or corrosion. Once done, the pipe should be shiny and smooth. 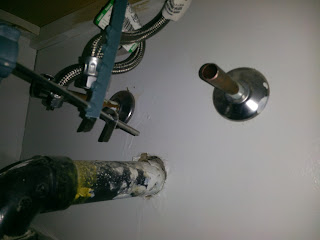 The new fittings going on the pipe are called angle stops. They are a valve that goes on the pipe so you can turn off the water to replace or repair a leaky faucet. There are a lot of types of these valves, but I like to use compression fit ball valves. I have never had these leak, and a quarter turn of the valve is the difference between on and off. Good for an emergency. 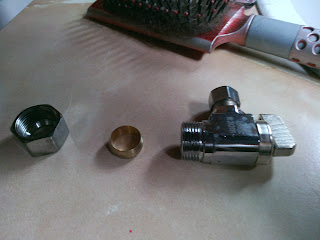 A compression fitting is easy to install because it doesn't require soldering. It also doesn't come off easily. But if the valve gives me trouble in the future, it will be easily replaced. The way a compression fitting works is that the brass ring (centre, above) hugs the pipe forming a seal. The nut (left above) squeezes the ring between itself and the valve as you tighten the threads on it. Between the body of the valve and the nut, no water will escape a compression fitting once its been tightened up enough. 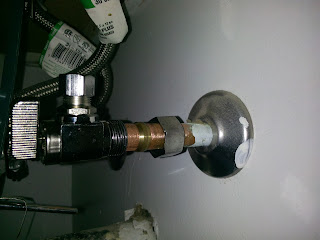 Here is everything assembled on the pipe ready for tightening. This is for demonstration only. You really don't need to take apart the parts to put this together. Usually its all preassembled in the package and you can just cram it on the pipe. The downside of a compression fitting is that if there are any gouges or scratches in the pipe running longitudinally, it may not be able to get a good seal. As far as I know, soldering is your best bet if that happens. Note the lack of Teflon tape in this picture. 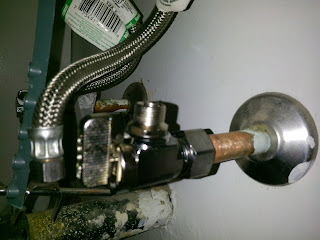 And the final product... one angle stop installed on a supply line. Still Teflon free. 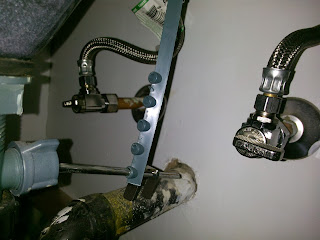 Here they are both in the off position, ready for the house water to be turned back on. I like to have valves in the off position when I turn on the water. This way, air in the line compresses and I can ease it out slowly while watching for leaks. Sometimes you can hear the air hissing out and know there will be a leak before the water reaches the spot. Some other folks I know prefer to have taps wide open so pressure can't build on the new fittings so fast.

This job only took about an hour from start to finish. It was quick and easy, and when the water was turned back on, there were no leaks. Had there been any, I would have just had to tighten up the compression fittings or supply lines a little more. 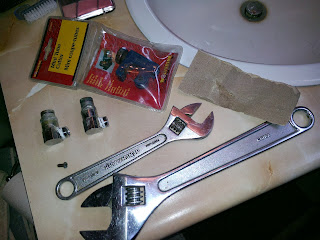 All the tools needed fit on the corner of the vanity, along with the evil screw. Does it get any simpler than this??


Posted by littleboatiris at Thursday, December 20, 2012 No comments:

Email ThisBlogThis!Share to TwitterShare to FacebookShare to Pinterest
Labels: Maintenance 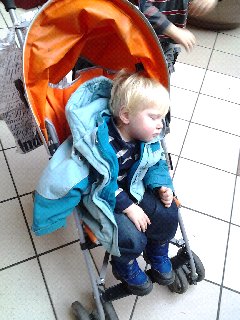 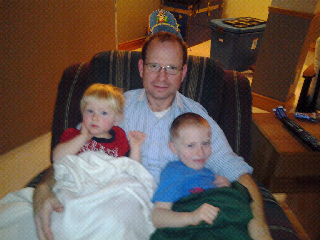 For the past 'n' years we have consistently put up the same artificial Christmas tree in each of our houses. It has worked well. It looks mostly good, with only a few shortcomings. it is not an electro-neon tree with fibre optic branches or a realistic tree with frost on the branches, pine cones, and to-scale bird nests tucked into the branches. It is a made-in-china plastick-needles on wire branches type of tree, but it looks good.
I like it. From 10 feet out it looks real and it doesn't drop needles.

But it doesn't smell like a real tree, and it doesn't look 100% real, and every now and then I get these romantic notions of a perfect tree in a perfect room, with the scent of pine and the ambiance of a perfect Christmas. I bounced the idea off SWMBO, and soon enough, we were heading out in the Thunderbuggy, headed to a tree farm in search of the perfect Christmas tree.

To be sure we got the perfect tree we formed a committee. Chairing the committee was Mama and I, with support from 2 small boys. The committee was supported by Chuck - the indifferent teen, and AP2, and her friend Louise. Louise and AP2 were mostly mystified by the process. The boys were interested, and Mom and I were tree spotting. Chuck was Chuck.

The rules at the tree farm are pretty simple. Grab a saw and search for the perfect tree. Trees with red tags on them are $40 and intended for suckers, trees without tags are $30 and are intended for intelligent folks like us. Don't step on the seedlings. Any tree is legit, pay before you leave.

It was a rainy day, but there was still a lot of competition for the perfect tree.

Our idea of the perfect tree was equally simple. It had to be perfect. Tall enough that if you stood beside it with your arm up, it was higher than you could reach. Not too wide so it didn't take up the entire living room, not too skinny so it didn't look like a pole.  No holes, no weird growths, green and healthy, perfect.

A number of candidates were considered and rejected. Tree after tree was assessed using the extended arm measuring stick. Tree after tree failed. Staying at the $30 budget point made it difficult to find the perfect tree, but not wanting to be suckers, we persevered. Over hills and down valleys, through the tall grass and mud we searched. AP2 spotted trees, Louise too. Chuck mumbled things about hot guys and vampires. We measured and rejected, considered and reconsidered, and finally narrowed the field down to the 2 best trees.

We stood and considered them. Finally settling on one, and rejecting the other we felt good about finding the perfect tree at the $30 price point. The saw was set to the trunk, and cutting began. James took the first few cuts, then I set the saw and got it going. Chuck had a try, then AP2 and Louise. Finally the tree came down.
As it fell I saw a flash of red in its branches. Was it a cardinal? Someone's boot lace? No, it was a red tag.

The committee pulled the tree back to the Thunderbuggy and I paid the farmer. We loaded it up on the roof, and headed home. Everyone was sleepy after the exertions of the day.

Our tree is now standing in the living room. It is adorned with lights and ornaments. It still needs tinsel and garlands. The house smells of pine and Christmas. It is wonderful. And for old times' sake we have set up the plastic tree in the basement. We need decorations for it. One house with 2 trees - c'est fantastique!
Posted by littleboatiris at Thursday, December 06, 2012 No comments: