Back to the Espalier, and a Little about the Pool

The weather is really warming up around here. Today its supposed to be around 18°C but overcast. That means spring is in the air.

With the warm weather, I've been watching the apple tree starts for signs of life. This is a bit of a sweat it out kind of a watch. You may remember that back a few months ago the dog attacked the espalier - a totally unexpected setback, and I had to replant a few trees because of that. 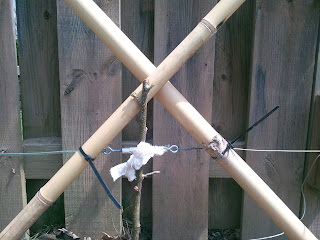 So I've been watching. I replaced 2 trees that were most definitely dead, and there are a few others that I think are likely to need replacing, but at $30 each, and a long drive to get them, I am hoping these trees find a way to survive. In any case, it is with great relief that I can report some of the trees have started to leaf out. I don't have new growth yet, but I do have buds popping and tiny leafs on the twigs poking out of the ground. I am thrilled that the entire fruit tree collection isn't dead (yet). If Bernie attacks the trees again, her life will be severely shortened.

On another note, the backyard reno is continuing with the pool deck in line after fencing. Our pool deck looks like a skate park. It is all hills and valleys and broken concrete. It drops 3-1/2 inches over 3 feet along the sides, and has cracks and chunks missing in other places.

Yesterday we had a gent from Westview Contracting by to work out a quote to overlay the concrete with a rubber polymer (Rubaroc). Hopefully this will make the deck not only more esthetically pleasing, but also increase its functionality, and extend the life of the concrete base. We were considering having the concrete replaced with interlocking brick, but the rubber overlay came in $2500 cheaper (or so) and has the potential to look much better. We are trying to keep to all-cash so we are saving toward this before committing. I suspect we will have the work done late in the summer. Before we go ahead with the overlay, I also have to reach out to a pool company to figure out the logistics of adjusting the height of the strainer basket to accommodate the new overlay, and to see what can be done about the cracked coping around the pool, and the liner stretching out in the corners.

Always more work to be done! In the interim I continue to build fence parts...

If you are following the espalier, try this link for our next update!

Posted by littleboatiris at Tuesday, April 30, 2013 No comments:

The next step in fencedom was going to be a bunch of forms to make a 14" square concrete base for each of my lovely posts. This meant a chance to practice cutting dadoes on my new-to-me table saw.

When I went to fire up the saw a couple problems flew in my face.

Problem #1. With each cut the dadoes became progressively deeper. I started off cutting 1/8" dadoes, but by the 6th piece, my dadoes were 1/2" deep. Sonce the dadoes go on both ends of the forms, whatever error there is is doubled. Thats a problem.

Problem #2. My dado blade snagged a nail and went boom. It cost me 2 carbides in the blade. This made me sad.

Problem #3. The belt in the saw made the machine jump around like a jackhammer. The vibration was awful. Despite all this I persevered.

Dado blade all ready to go! 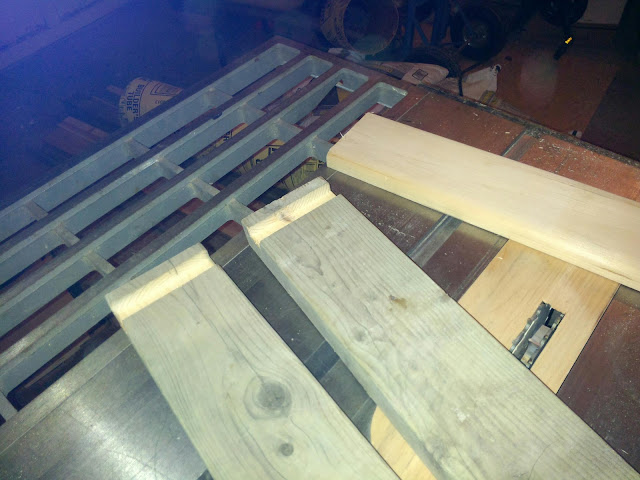 Dadoes cut. These are some of the later ones - much more than 1/8" deep! 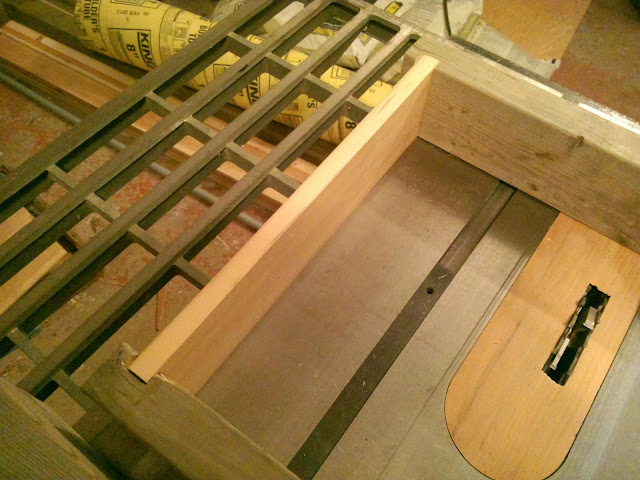 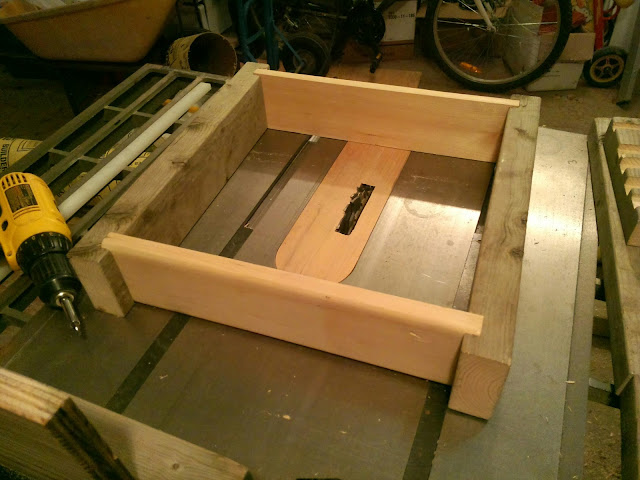 Yup! Everything looks good once its assembled.

So my solutions...
﻿
Solution #1. The depth of the dado varied due to 2 things - the vibration in the saw causing the blade to climb the workpiece as it cut - I could measure the difference between the ends of a cut. And due to the elevator wheel being very loose. I managed to dampen the vibration (see Solution 3) but even with disassembling the elevator wheel assembly and reassembling it, I couldn't figure out how to get more control on the adjustment. I need to get a handle on this.

Solution #2. I was fortunate to have a second dado set hanging around, so I was able to just swap out the setup for the other blade, and continue working. The first set (that I smashed) was a Freud, which is a very good set. The new set cut much rougher, but it still did the job. On advice from a friend I called into Freud and was advised that they have a repair shop for klutzes like me about half an hour from here. I can take the blade there and have it repaired for about $20. Unless the damage is worse than I described on the phone.

Solution #3. Chalk this one up to newbieness... The saw came with a link-belt when I got it. Since the belt was 20+ years old though, it had dried out, and was prone to breaking. The last time it broke, I replaced it with a Vee belt from TSC. I took a guess at the belt size by holding it against the old link belt. With the V-belt the vibration was brutal, so I decided I better go back to the link belt. The good folks at Busy Bee set me up with a properly sized belt for the saw, and presto-change-o, 90% of the vibration in the saw is gone. It turns out the Vee-belt I had bought was not only the wrong thickness, it was also 2" too large. No wonder the machine didn't run properly. Also looking at the belt, you can see that the sheaves are out of alignment, once they are trued to each other, I should have a vibration-free saw. I hope.
Posted by littleboatiris at Friday, April 26, 2013 No comments:

Over the last weekend I rented a hole auger at Home Depot, and made holes. I put sticks in the hoes so they would have a purpose (the holes, not the sticks). 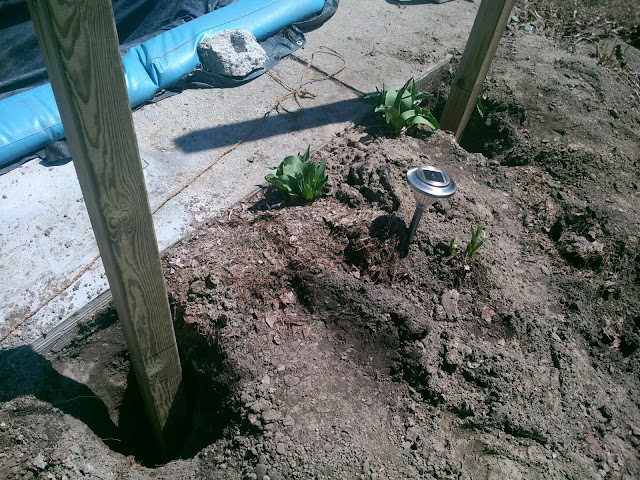 Now that I had sticks in my holes, I thought it might be nice if the sticks stood upright, and if the sticks were all the same height that would be a bonus. So, I built a jig that allowed me to level the sticks to a datum line - I used the coping on the pool as a datum since it is level. 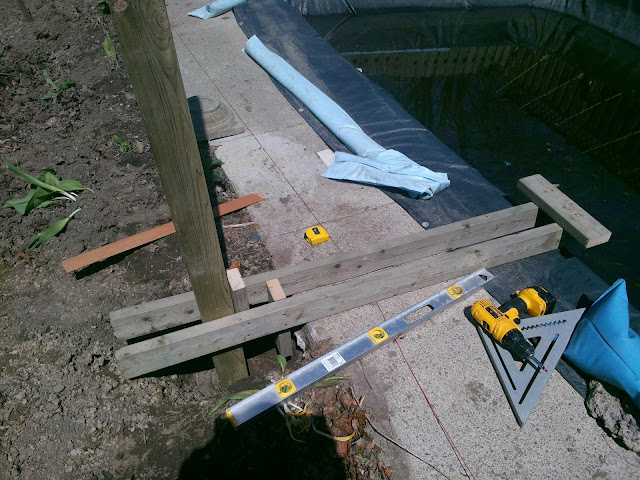 The jig is a pretty simple setup. The wood block that points down hooks onto the edge of the concrete walkway to maintain an offset from it. The block that points up sets where the pole will go. Lift the pole until a mark on it lines up with the bottom of the "pole attachment block" put in a screw, and the pole is held in position. Using a speed square, I could swivel the rig until the pole was square to the concrete. 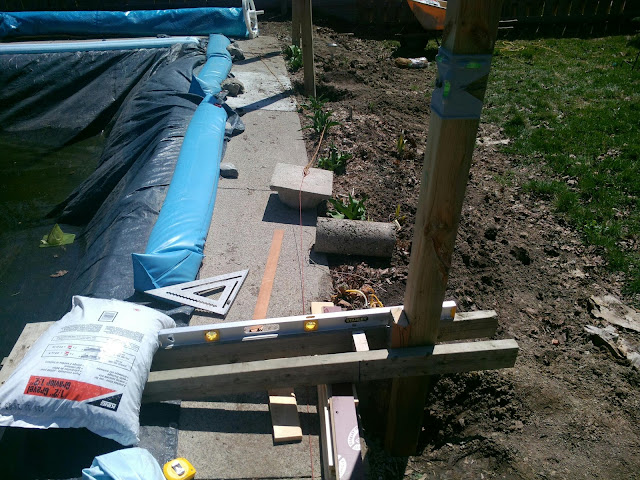 Once things were square, a bag of gravel would counter weigh the weight of the pole, and a set of shims would lift the pole until it was level and in line with all the other poles. Everything was lined up on 4 dimensions, then the hole was back filled. I used crushed gravel to fill the pole holes. 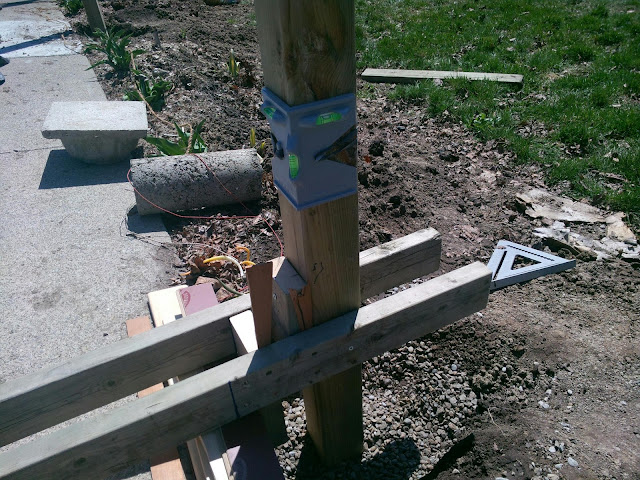 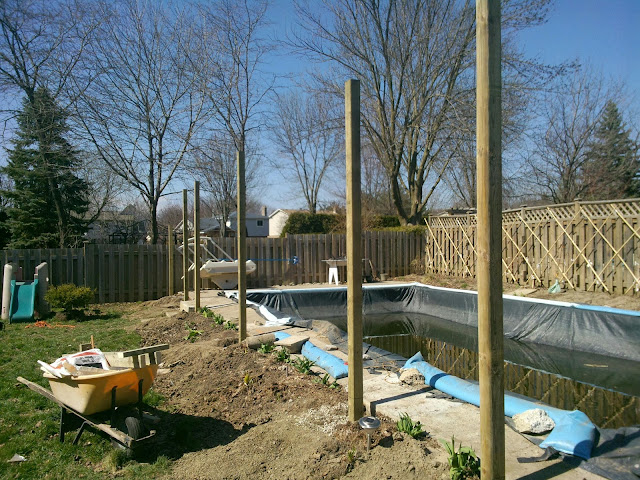 It was lots of work, but by the end of the day, I had 7 poles ﻿all lined up to be our pool fence. SWMBO helped set the last 2 so the pole-setting rig was no longer required. 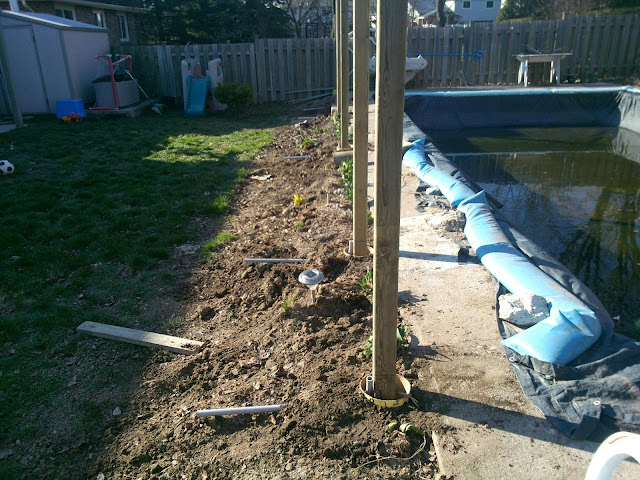 With the poles in place, I was able to run conduit and then back fill the bases. Now all the poles have been topped up with gravel, and the sonotube bases have been levelled off. Ready for the next step in the process...﻿
Posted by littleboatiris at Monday, April 22, 2013 No comments:

I composed this whole post on my tablet and thought I had saved it as a draft but it seems to have disappeared. Oh well. The pics were awesome, now you have to use your imagination.

One of my projects for this spring was to find a better way to attach the outboard remote to the cockpit so that it wouldn't fall off this season. I think I have achieved that.

The old and unimproved method was that the PO had drilled three holes through the cockpit and screwed directly to the fibreglass. I don't know how long the controls were mounted that way before I got the boat, but that was how they were.

Last year the play in the mounting screws became increasingly alarming until by the end of the season, 2 of the three screws had actually fallen out, and the remaining screw was dangling precariously. It was an important thing to fix pre-launch.

In order to fix this I had a number of ideas of ways to permanently attach the handle, but most of them involved some kind of clamping, which just wasn't feasible at this location. On the way home from work one evening the solution struck me and I ran with it. Here's my fix.

The gap between the cockpit wall and the quarter berth ceiling is about 7/8" so it is quite do-able to shove something in there. The hole that the handle goes through is about 2" across, so whatever you shove in there had better be small. Clamping is impossible. Unless you have either a lot of time and patience or a really cool clamp. I have neither.

My solution was to cut 3 blocks from a sheet of 3/4" plywood. Each block was about 1" X 3" X 3/4"
Each of these blocks had a pilot hole drilled through it to receive a very small screw. I would tell you what the screws were, except that they came from Grandpa's odds-n-ends tin, and were just marked "screen screws" I have no idea what screen they held on. The important thing is that the screws were of small diameter than the mounting screws for the handle.

To each block I assigned a screw, a fender washer, and a piece of waxed paper.

Using a Skippy peanut butter jar, I mixed up a mess of epoxy with some micro bubbles to thicken it. Each block was painted on all sides with the epoxy, then held with 2 fingers in the gap between the cockpit wall and quarter berth. A screw and fender washer was attached through the elongated mounting holes for the remote control handle. Waxed paper prevented the epoxy over-flow from curing to the washers. The screws and fender washers acted as a clamp to hold things in place as the epoxy hardened.

About 2 hours after getting everything in place, I went out and removed the screws and fender washers. The blocks were holding nicely.

Later still I placed the handle in the hole and used it to run new pilot holes through the plywood to attach the handle permanently. Now everything feels nice and tight, and there is no play when I shift.

Posted by littleboatiris at Wednesday, April 10, 2013 No comments:

Because the Cat Came Back....

A few weeks ago the boys & I had the opportunity to go on a big adventure… to see Fred Penner's latest show, "The Cat Came back!"

We started off by going on a 'Percy Train' ride with some cousins. 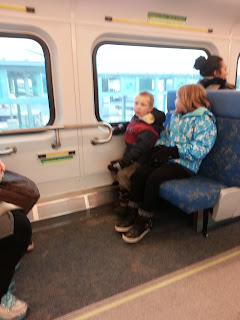 Then walked down to the theatre, where they were holding pre-show 'cat activities' in the lobby. 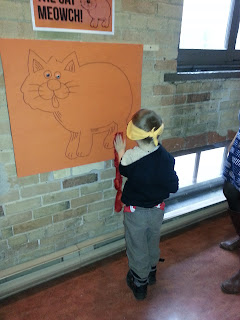 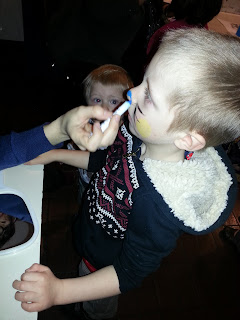 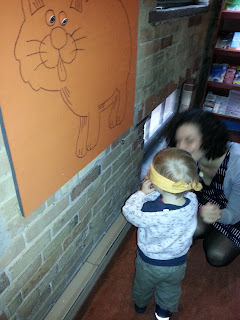 This theater caters to children's shows… they had an abundance of booster seats for small bums. 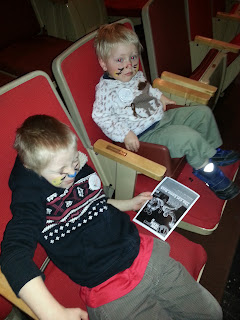 And following in the show, got the opportunity to meet the cat: 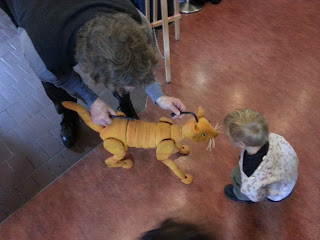 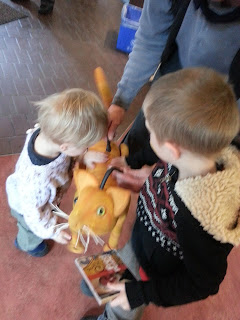 Mr. Johnson (as in "old Mr. Johnson had troubles of his own, he had a yellow cat, who wouldn't leave his home....): 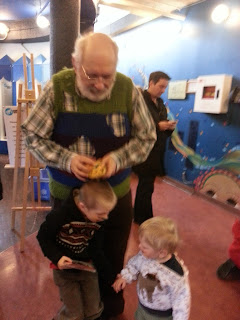 And of course, Fred Penner: 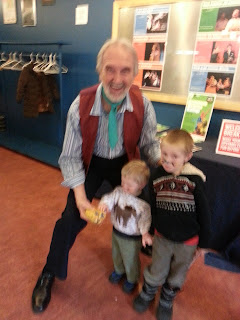 Who signed the new CD I bought for the boys (they have already memorized every song).

And got back on another 'Percy Train' for our ride home! 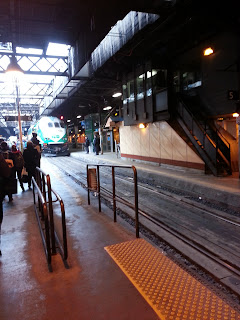 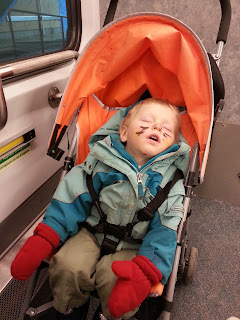 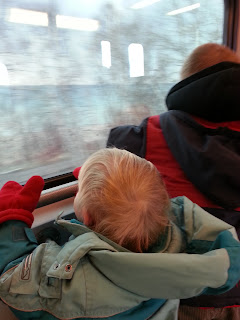