The letters that Buddy has learned without being formally taught.

We just have chickens living in the basement.

So this morning, Prospector informs me that the Americauna, who was living in the basement, has laid an egg in the centre of the coop floor now that she's moved out.

Also, the Wyandottes that have been moved inside, have laid an egg at the very back of their cage, and that he leaves me to collect that one.  Also, he suggests that we should maybe figure out some kind of laying box for the 'hospital,' so that they don't become accustomed to laying out of the boxes.

So I go downstairs, to collect said egg.

And completely forgot that the Wyandottes that are in there now, are not 'tame' like the Americauna was.  As in, with the Americauna, you would go downstairs, open the door, she would follow you to the feed, follow you back, and eat right out of your hand.  She was becoming more pet-like than farm animal like.

I open the cage door, and the egg is, way, way back there.  There is no way of getting it unless I either crawl through the chicken poop to it, or use a tool to reach it.

I choose tool.  Tool of choice is the broom... I can sweep it out.

This worked just fine with the Americauna.  She was tame, remember?

The Wyandottes, while being quite friendly, are not pets.  Not at all.  So they see a large tool coming towards them, and panic.  And one... flys out.

I have a loose hen in my basement.

Now, I don't know about you, but my basement?  Is a dumping ground.  There are tools, old boxes, a pile of stuff that is headed for a yardsale, patio furniture waiting for warmer weather, etc.

Now, this nimble little hen can walk all over and around these landmines.

She got close to the cage at one point, so I opened the door, and tried to shoo her in.

I'm sure you all know what happened next.

Yes, now I have two hens running around my basement.

Eventually, one runs into the cage.  I don't know if it was the first or second escapee.

The other one keeps running to the back of the cage, and is trying to join her friend... but whenever she gets close to the cage door, I cannot open it without her running away, and can't leave it open, 'cause then I'll have... TWO HENS running around again!!

Eventually, I remember that the hospital is a extra large dog cage.

And that, it is a cage that is designed to be shrunk with a divider panel.

Also, that I tried to remove the panel a few days ago, but it was stuck on one side, so it is simply folded against the wall.

I think that this series is awsome....

Buddy & his second cousin Bean, having a hot chocolate together.... 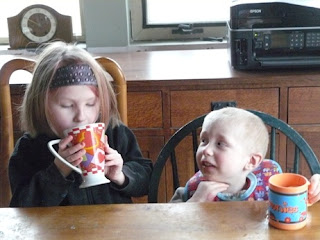 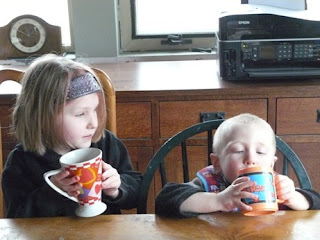 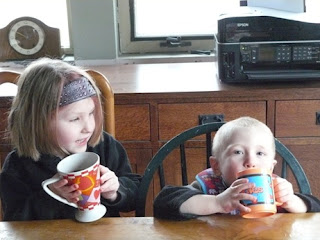 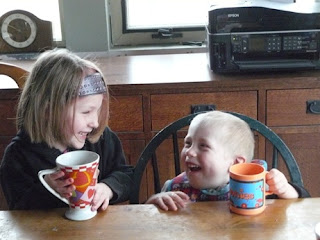 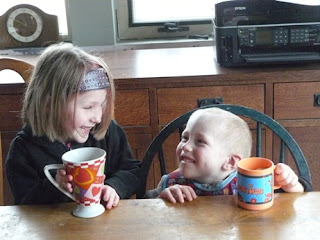 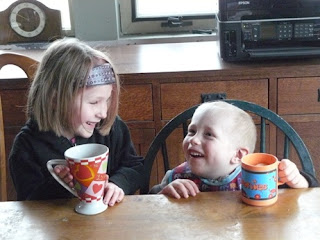 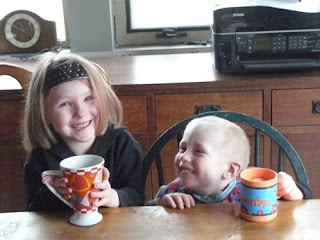 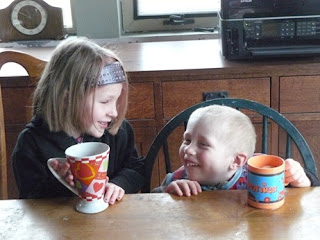 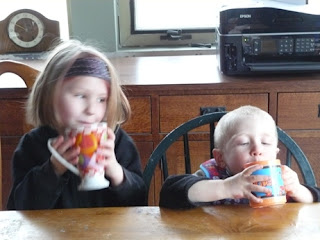 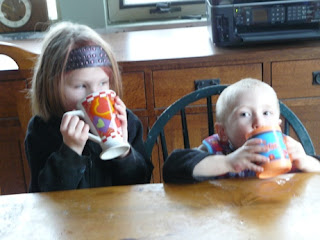 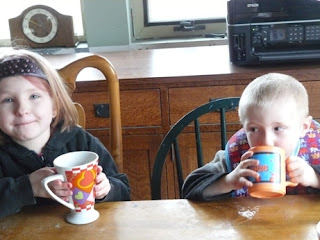 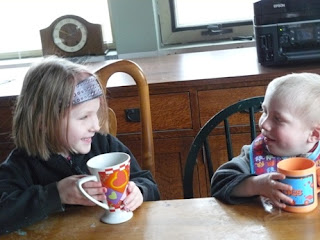 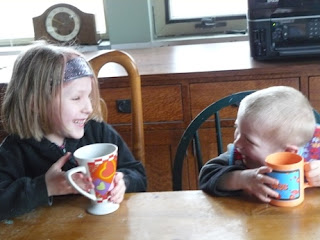 Our dog Bernie Loves us, which is great - except for when she farts or runs next door for a visit, then we don't love her.

Her favourite sleeping spot lately is under our bed. I read in a Fung Shui design guide that bad energy builds up if you put your bed on a solid base, so we have a nice four-poster frame with boxes of wine bottles propping up the slats that are supposed to hold the mattress in place. I won't go into detail on how the slats broke, but its not as fun as you think. Anyway, the system works well, and it's pretty efficient. Light some candles, grab a bottle of wine, - oh wait - we share our bedroom with a newborn, baby chicks, and yup, Bernie. The candles and wine never happen.

Now I dunno about your 2 year old, but ours wakes up about 3 times a night to cry. No for any good reason, just to cry for fun and exercise. When that happens, it is my lot in life to jump out of bed and run upstairs to cuddle. Only Bernie, well, Bernies head anyways, is usually placed exactly where my foot lands as I jump out of bed. Vith vigour.

So, landing squarely on her snout, and pulling off the "shimmy-twist before I hurt you, while falling over the dresser ending in a half-gainer" move, I play dodge-dog in the dark trying to get to the bedroom door without waking SWMBO or the baby, or the chicks with whom I share my bedroom. Bernie seems to understand that we don't want to wake anyone, so she does her best to help. Shocked out of her sleep she immediately stands up, cracking her back on the bed. Then she tries to back out from under the bed, smacking her head off the bedframe. Realizing the bed is (hardly) behind her now, she reverses gears and puts it in forward, clocking her head a second time. By now she is fully awake, and her tail is going 90 miles an hour, beating the side of the matress with a loud "whump, whump, whump." The neighbours have asked if we heard the helicopter.

Once Bernie is out from under the bed, she bravely runs for the bottom of the stairs to see if she can beat me there, and create a second tripping hazard. She is sometimes successful since I have been hobbled by twisting my ankle while trying not to step on her face. Now I get to repeat the face-step avoidance manouevre. I scramble/sprawl up the stairs, arrive at Buddy's bed, comfort him and turn to head back to bed. This is like spinning the crown and anchor wheel.

Did Bernie lie down at the bottom of the stairs to wait for me? Is she on the living room rug? Is she back under the bed? Is she at the front door waiting to come running? You spin the wheel, you take your chances.

The nice thing is that once I am back in bed, I know it will only be a matter of minutes before she takes up her post at the foot of the bed again, and starts snoring. Or Farting. Dog farts in the night are the worst.

I also know that at least once in the night she will want to be let out to go pee. When that happens she will come up and rest her head on the edge of the bed, so that her face is 1.74mm from mine, she will pant twice, then poke with her nose. Have you ever been woken from your sleep by dog breath with a wet nose chaser? Believe me, it is exactly as fun as it sounds. If I don't get up instantly, she will once again beat the side of the bed of her tail until I rise up in submission. Then she will go outside to pee.

Everyone knows that at 3AM the most fun you can have is playing with a dog, so after she pees, she will do that stretch your paws way out with your butt in the air thing while she looks at me, wags her tail and pants. I will grumble, she will run back and forth in front of me. I'll turn around and go back in the house, and then she will come up and paw at the door 'cause she wants to come in too.

5 minutes later I'll get the nosepoke again - she didn't poop. Plum forgot with all the fun she was having.
Posted by Star at Thursday, March 24, 2011 No comments:

One dozen eating eggs: $3 (totally ripped ourselves off here without realizing it)
Seven hatching eggs: $17.50

dang birds are starting to earn their keep!!
Posted by Star at Tuesday, March 22, 2011 No comments:

OK, this may be hard to follow, Bear with me.

Back in the fall, we recieved six Silver Pencilled Wyandotts (SPW). They have been housed together (2 roos, 4 girls) in the Coop-de-Ville

We had 3 Chanty hens in our other coop -  the TajMahChicken, along with three retired laying hens.

In the  basement we had a very sick Chanty Roo sharing a dog kennel with a very loving Americauna hen. We really loved that roo and that hen, and they loved each other.

Loved (past tense) because the roo was sick beyond hope, and is now an ex-rooster, dispatched this afternoon to the great beyond by the axe of judgement.

With the rooster gone, the Americauna was left alone. She needed a buddy. One of the SPW roos was assigned to the role today. He has been moved into the basement with the Americauna hen. We didn't want to introduce her to another flock alone, or she woulda got beat up pretty bad.

That left the other SPW roo with 4 girls, and no controls on breeding, so we split 2 hens away from his flock, and moved them into the TajMahChicken, awaiting the future re-introduction of the SPW roo that is currently being buddy to the Americauna. This made the Taj far fuller than the CoopDeVille.

To balance things out, we moved the 3 Chanty hens over to the Coop DeVille such that now our arrangement is...

Add to all this that we now have 3 SPW chicks and 3 Buff Orp chicks in the brooder, and 20 eggs (12 Cuckoo Marans, 4 SPW, 4 AmericaunaXChanty) in the 'bator, and it could get to being an interesting spring trying to integrate flocks. My next big move will be to set the chicks into a brooder in the basement near the Americauna in the hopes that she adopts them and they form a flock strong enough to stand up out there. What fun.
Posted by Star at Sunday, March 20, 2011 No comments: 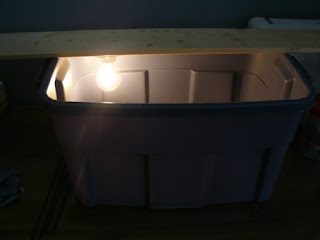 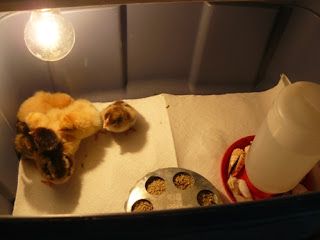 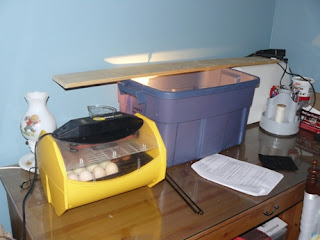 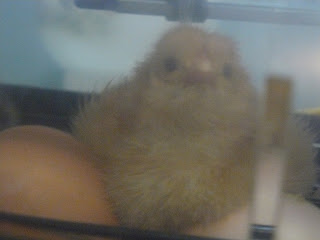