A few weekends ago, while changing the sheets, I decided to take the front rail off of Buddy's bed, so that he'd have a 'big boy bed.'

Here he is, demonstrating how he's going to sleep: 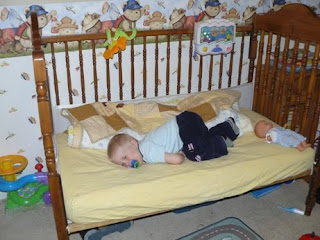 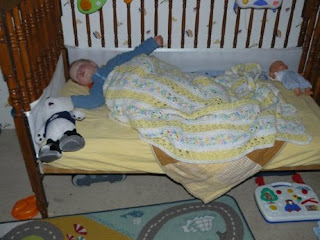 He fell out once the first night. I didn't hear the 'thud,' but heard him crying. When I got to his room, there was a little bundle of blankets on the floor, squirming around. He only fell out one other time since then.
--
When he was sick last weekend, he never left the bed, just sat on the edge and called for us until we went to see what was up.
--
And then a few mornings ago, I woke up to hear him whining "bummmmmm....... bummmmmmm" and thought 'what the heck?" When I got in there, again, he was sitting on the edge, and soaked.
--
The night before however, his Daddy found him reading a story in the hallway at three in the morning.... so the times he does need us, he doesn't leave the bed, but when he doesn't need us, he gets out!!

Buddy will be two in April.

He is not ready for 'active' toilet training yet.

However, he is starting to show signs of getting ready to be ready.

On the weekend, his diaper was bothering him.... and he looked at me expectantly, while grabbing his rear, saying "bum? bum?" Asking for a bum change... definitely a good sign.

He loves to stand over the toilet while it's flushing, and wave and yell "bye bye! bye bye!" to the contents.

He'll sit on the toilet for short periods, and once last week, nearly gave himself a swirly trying to climb on.

At daycare, there's a teddy that he really likes... a few times when I've been picking him up, he's decided that Teddy needs a bum change, and grabs him, takes him over to the changing station, puts him down, and then reaches up to where the cubby's are, looking at myself and his care provider, like "how come you aren't changing his bum? He needs a bum!"

Oh, and he swiped a diaper out of the diaper bag, and attempted to put it on Carlton bear the other day.

Also, let's not forget when I walked past the upstairs bathroom, to find that he had put his trainer seat on the toilet, and was in the process of putting "baby" (his dolly), on the seat. Poor Baby didn't have a big enough bum though, and his toes nearly hit the water!!

So right now, when we change him, we'll ask if he needs to pee in the toilet, and set him on it for a few minutes. He's yet to actually DO anything, but at least he isn't scared of it. And this way, when he really is ready, it'll be something that he's been doing for awhile.
Posted by Star at Thursday, February 11, 2010 No comments:

We have quite a bit less snow this year.. not enough to build a ramp of any sorts like we have in the past. 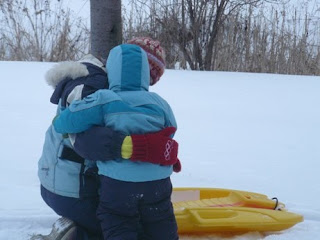 Coming to the realization that deadweight going up an incline = very difficult. 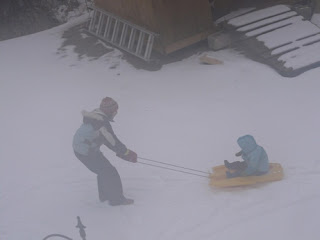 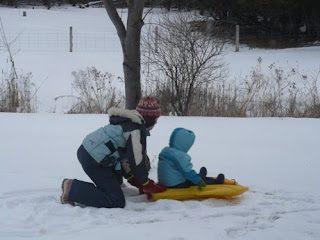 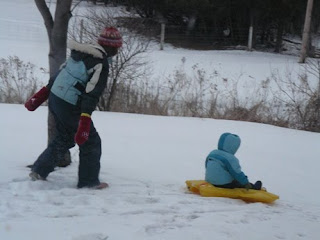 "Is he laughing or crying??" 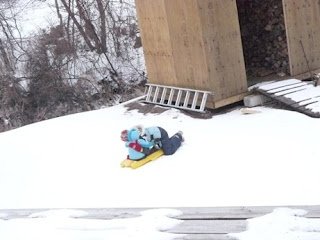 While changing Buddy's sheet on Sunday, I got fed up with the crib, and removed the (removable) side rail.

And only had to pick him up off of the floor once that first night, and not at all last night.
Posted by Star at Tuesday, February 09, 2010 No comments:

OK, so Jan 31, hubby decided we should have scalloped potatoes for dinner, and found me a recipe while he cooked the rest of the meal.

Unfortunately, neither of us really looked at the cooking time carefully.... oops... we ended up eating them Monday.

This was where we stopped reading... when we started cooking, dinner was about... oh... 45 minutes away. Then the next line said this:

we made rice. and did the second bake the next night, and had them on Monday.

Last week, we began work on the Master Bedroom. I fussed and fretted over what colours to do, then finally made a snap decision, bought paint, and painted, all in one night. 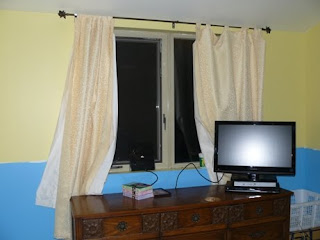 Here's the room with primer on one wall, and the old dirty beige colour on the other. 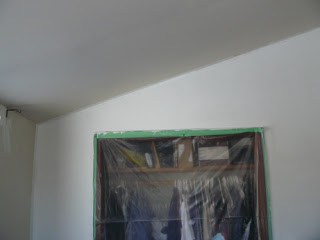 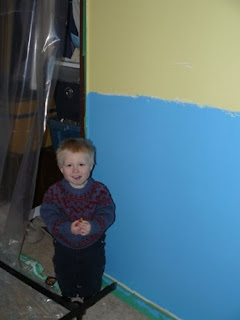 I decided to go with a yellow / blue split all the way around. The colours match our quilt nicely, but we will need new curtains... the old ones are too close to the wall colour. We're thinking either a dark navy blue (a colour in the quilt), or a dark maroon red (another colour in the quilt)
My little helper.
I had to do all my painting either during his naptime, or when Daddy could play with him. There was NO WAY he was going to play nicely downstairs while his Mommy was busy upstairs! He wanted to help out! 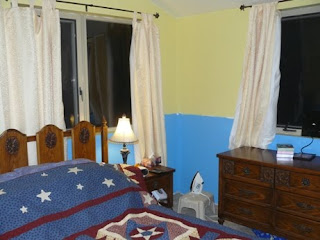 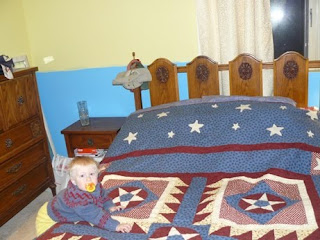 Hosted by Cecily and Robyn
Posted by Star at Friday, February 05, 2010 7 comments:

We are attempting to purchase mostly 'Canadian' groceries.

Obviously, there will be exceptions - COFFEE for one.

But after doing some research, and finding how many 'Canadian' products are not actually Canadian, we are going to change our habits.

In order for a product to be "product of Canada," it only needs to be produced here. As in, Apples can be turned into concentrate oversees, shipped to Canada, and turned into Apple Juice with the 'Canadian' stamp on it.

ok, so how are we doing this:

Alright, so we have left meat and veggies.

Meat, well, I don't have quite enough land for a farm. BUT, we can look into buying large chunks of meat from local farmers.

Veggies. I'm looking into a pressure canner. Then I can either grow & can, or go to the farmers market & can.

In the past, we've had success growing:

But, we have tons of space for a garden. I'd like to try a variation of the 'square foot gardening' this summer. Veggies I hope to put in include:

And on the property, we have Apple trees suitable for Apple Butter, and a few Black Currant Bushes. The Black Currants can be propagated, and I think that they need to be moved so that they are in more sun.

We also have a food dehydrator, which is another method of preserving. Dehydrated food is good for taking camping, sailing, hiking, etc. Buddy like dried apples, which are healthy (it's just an apple... nothing added), and clean (think toddler with juicy apple.... yup.)

This Little Guy loves to help out... he was trying to "fix" the bedframe.

Lobster mitts! Helping Mommy cook dinner.... Mommy's given him playdoh & cookie cutters, so he can "cook" with her! 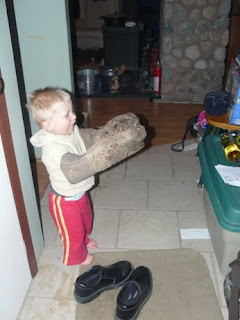 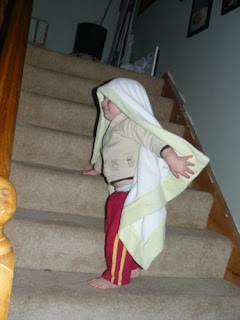 Ghost in the house. 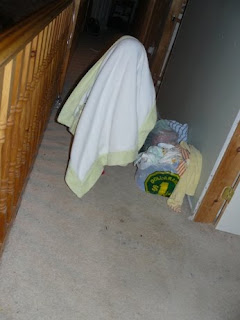 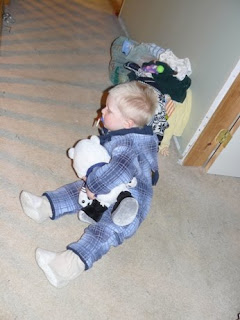 On Sunday, I changed all of the light switches in the house.

When we moved in, the house was a hodge podge of:

And they were all... icky. like, to plug anything is was a challenge, 'cause there was gunk built up inside the outlets, and you couldn't really get a plug in very well.

And some of them were painted over, some had paint to the edges.....

And, sometimes they had a white switch with a beige plate... or vice versa

As we've been painting, we've swapped them for plain white switches & outlets. Since we'd already done the kids rooms & bathroom, upstairs, our room was the only one left. so I switched all the outlets Saturday night, and then Sunday after church, switched the light switches.

Then realized, that I already had the breaker off for the two light switches in the hallway, so I did them.

Then realized, I already had the breaker off for the switch at the bottom of the stairs, so I did it.

Then, since I had the tools out, did the one in the living room.

Then, since there was the three in the hallway right nest door, did them.

THEN, since there was only the kitchen & the outside light left to do in the dining / living / kitchen (all connected), I did them.

For light switches, there are two in a utility area, which I wasn't going to worry about, but I have two switches left over, so I'll probably do them, just cause I already have the stuff.
Posted by Star at Tuesday, February 02, 2010 No comments:

Yesterday, I was changing all of the light switches in the house, since when we moved in, they were rather inconsistent.

Buddy followed me into the bathroom, and then proceeded to try to climb onto the (open) toilet seat to watch. (either that, or he was trying to pee in the toilet, despite the fact that he was fully dressed).

The Boy nearly gave himself a swirly!!

Note to self: be sure camera is closer to hand at all times.
Posted by Star at Monday, February 01, 2010 No comments: