So I saw a kijiji ad for a table saw and some tooling. After struggling with a contractors saw for the past few years, I decided it was time for an upgrade. The old saw will now be relegated to rough work and mobile setups.

The old saw's stand will become the base for my compound mître saw. 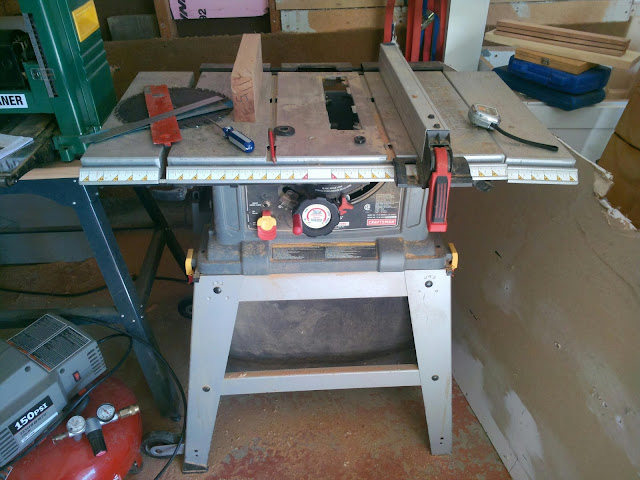 Apart from being well-used for a bunch of crazy stuff (I trimmed out the whole last house with it) this saw has a few definate issues. first, you can see the sag in the table right under my measuring tape - that is because the table extensions are held on by plastic clamps. All it took was one heavy piece of lumber hitting that wing when extended, and the clamp broke. Sears tells me I could get a new clamp, but I can't identify the part number.

The second issue is that the throat plate is not co-planer with the table. Here the throat plate is sitting on top of the saw - its the red rectangle with the steel rule going across it. When I tried to rip that big block of cherry in the pic down to 1/4" slabs I ended up with pieces that were 1/4" at teh base, and anything between 3/8" and 1/8" at the top. Frustrating.

Anyway, the saw will now hang on the garage wall for mobile and rough operations, and the new saw will be installed as our precision piece. 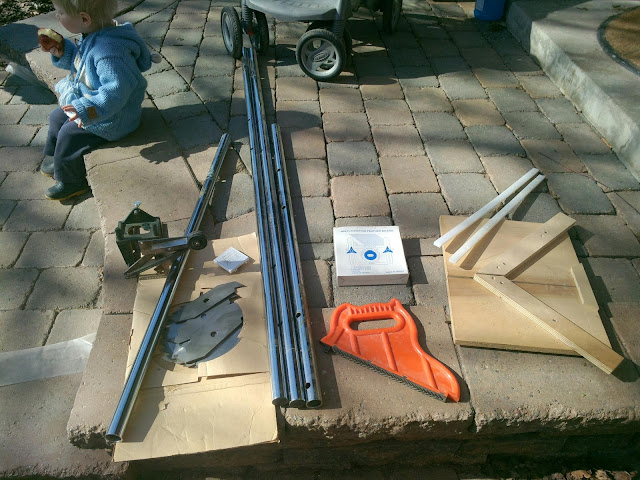 Ok, the kid wasn't included, but what you see in this pic is a dado blade, 2 sets of rails, a featherboard, a 45° cutting sled, a spare set of white plastic rails to make another sled, and a roller thinggy for guiding boards through saw while ripping. I have no idea how to use it. 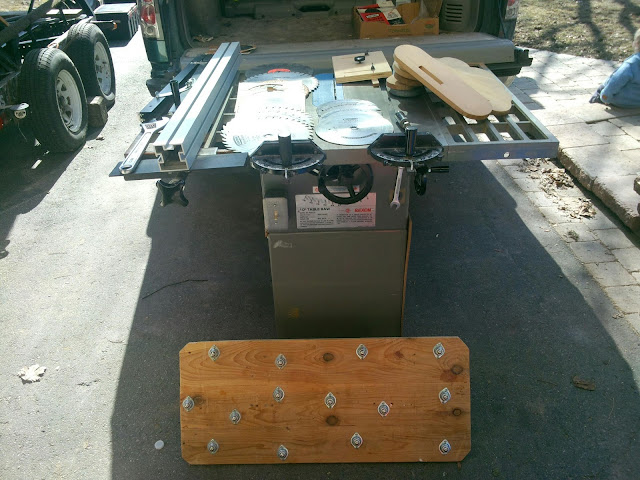 In this pic is the rest of the stuff. A pile of throat plates, about 20 blades - some multipurpose, sone laminate, some I dunno. 2 mitre gauges, another sled for some unknown purpose, a fence, and a taper cutting Jig. On the ground is an outfeed table with a bunch of roller thinggies.

Not shown in the pics is the table extensions and a third set of rails that the fence here fits into. I need to get this all assembled so I can start to play.

Posted by littleboatiris at Saturday, March 30, 2013 No comments:

Brand new Craftex planer  from Busy-bee tools, and a used router, router table, and stand from kijiji. And finally a before-after pic of a hunk of wood. The planer does a good job! 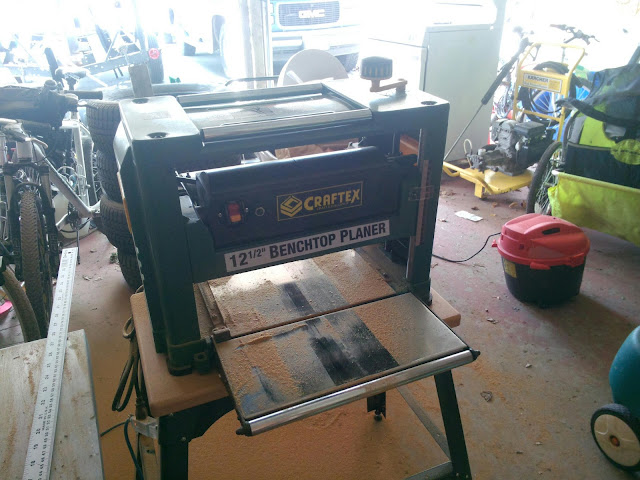 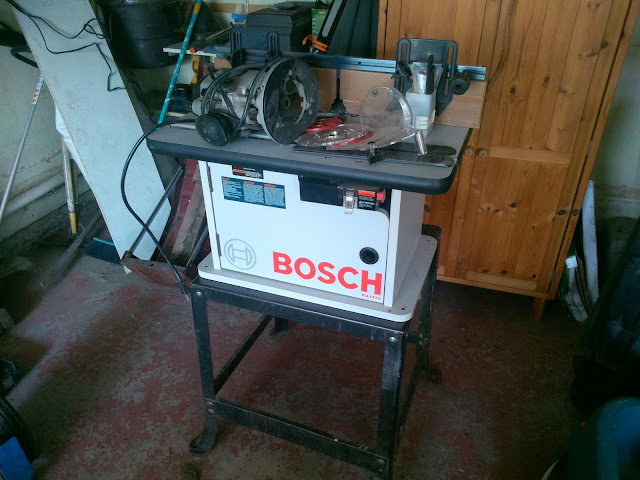 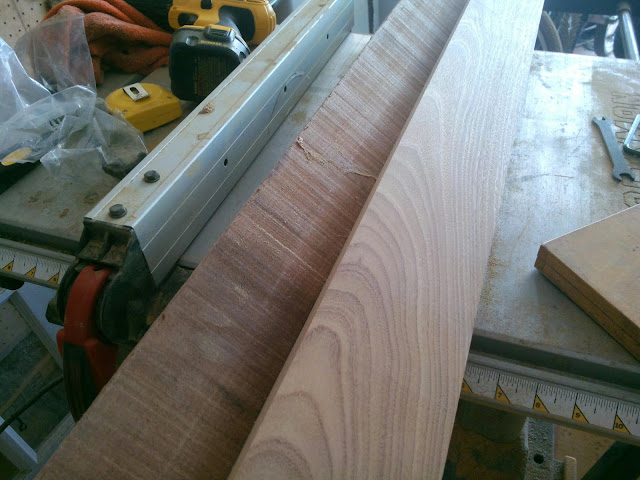 Posted by littleboatiris at Sunday, March 24, 2013 No comments: 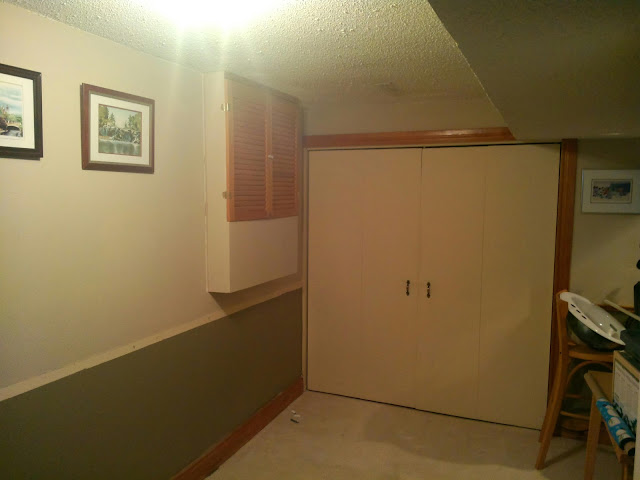 Posted by littleboatiris at Thursday, March 14, 2013 No comments:

Email ThisBlogThis!Share to TwitterShare to FacebookShare to Pinterest
Labels: Renos

Getting ready for spring launch. 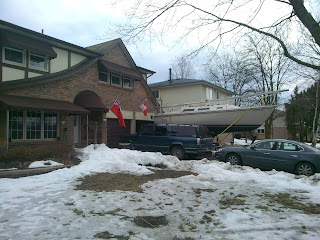 Posted by littleboatiris at Monday, March 11, 2013 No comments:

For Christmas, SWMBO's folks were generous enough to give us a weeklong vacation sans kiddies in the land of cigars and rum - Cuba. Here's a sample of sunny smiles... 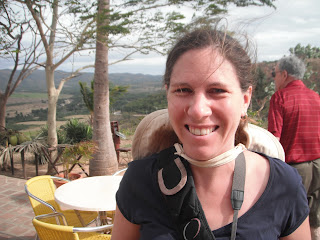 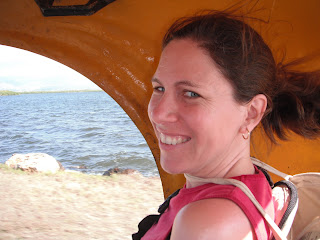 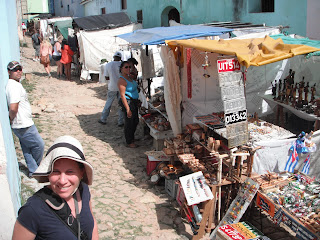 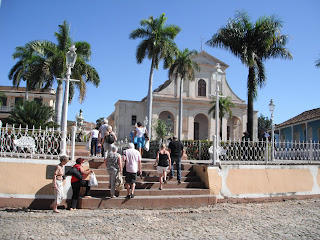 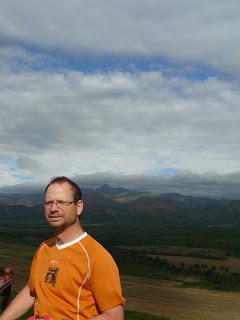 Posted by littleboatiris at Friday, March 08, 2013 No comments:

OK once again with the griping, but I promise to get more positive in the future.

We actively sought out our dog, and for the most part she is good to have around. We looked for a breed known to have a calm temperament and easy demeanour. We wanted a dog that was easy to ignore and didn't take too much attention. Since (at the time) we lived in the country, we looked for a larger dog that would do well around animals and kids, but have enough presence to scare off unwanted visitors like coyotes, raccoons, and Jehovah's Witnesses. We settled on a Bernese Mountain dog.

According to the American Kennel Club:


Bernese Mountain Dogs (Berner Sennenhund) originated in Switzerland and are named for the Canton of Bern. Historically, Berners were used as general purpose farm dogs. Their large, sturdy frames and calm, confident temperaments made them ideal for pulling carts to market, driving dairy cattle, watching the farm and acting as companions to farmers.

Right Breed for You?

Right Breed for You?Farm dogs by heritage, Berners need a moderate amount of exercise as well as consistent obedience training. As a double-coated breed, they also tend to shed, and so require regular brushing. Their gentle, easygoing manner and the need to be close to their people makes them a good fit for families.

That's cut & pasted right from their site. A dozen other sources talk about calm, laid back, relaxed Berners sitting around doing nothing. Conversations with owners of Berners said the same thing. In fact the only complaints we heard from folks about their berners was that the dog laid around too much and they wished they were more active. Sounded perfect for us. We ran out and got ourselves Bernie. She came to us as a cute puppy, and we thought - "Wow, this will be great!"

A week later she got into the chicken coop and killed all of our chickens.

She has to be the most high-strung berner out there. If someone knocks on the door she flies at it barking. She skids around the house like her tail is on fire, steals food off the counters and table, and generally tries to do everything she can to not be a Bernese. Maybe she is having an identity crisis.

Anyway, Bernie's way of ringing in the new year (I know, that was months ago) was to eat the espalier. You know all those posts about setting wires and planting trees, and all that, well apparently it isn't dog-proof. Bernie busted a few wires off the fence, ate a few trees down to the grafts, tore out a couple and ate the roots off them, and managed to somehow damage every tree I had planted.

I am hoping we can reverse the damage. Her appetite for apple trees has hopefully been satiated, but in the interim she is being closely watched whenever she is put out in the yard. I have trimmed all the trees down to the highest set of buds possible, and i hope they grow back. This was actually in the plans for the spring anyhow, so I am not totally crushed. The trees she dug up and ate need to be replaced. I sent an email to the orchards where I had bought the trees, but I don't know if they have any whips available for spring planting.

Bernie has been bought a muzzle.

AP1 was fantastic, but left early. AP2 was also great, but she too left early. We are now in process of introducing AP3 to the clan. We had carefully chosen a girl from Tunisia to be our au pair on the agreement that she would arrive on March 1. Getting a visa to travel here from Tunisia is a little complicated, and we worked closely with AP3 to make things work. The visa was granted on February 28th, and AP3 told us she would get a ticket the next day to travel on the weekend. Then she stopped emailing.

And her facebook profile disappeared.
And her Skype account was inactive.
And we had no clue what was going on.

With AP2 gone home by now, we found our selves in a tight spot, so SWMBO surprised her boss at work with the announcement that she wouldn't be in this week. Having an understanding boss, we were lucky she was given a week off while we tried to figure out what the heck was happening with our au pair.

We were surprised Monday morning at the breakfast table by a phone call from Tunisia - apparently the AP was getting a ticket and would be here by the weekend. OK - at least we knew what was going on and could plan to be back at work for the next week. SWMBO had wasted a week of vacation time that would otherwise have gone to a family getaway, and the AP obviously was clueless about what she was doing to our plans for the coming year, but at least we would have childcare by the weekend.

We continued to not hear about the au pair's travel plans through the week. Then on Wednesday we got an email from Tunisia - the AP was waiting for good deals and would let us know as soon as she found a good ticket to buy. WTF! I about lost it. You don't send an email a week after you were supposed to have bought your ticket, and tell a host family that you are costing them their family vacation while you wait for deals on airfare. I sat down with SWMBO and we decided that AP3 could stay in Tunisia, we had a backup plan in place and sent an email to AP 3.1 who will be here nearly immediately. This young man has been in touch with us for months and is very excited to come immediately. He already has a flight lined up and sent us his travel plans.

He is willing to stay with us for at least a month while we figure out whether we will continue with au pairs or move to more traditional childcare. Tunisia has been an expensive and frustrating experience. We thought we were helping someone overcome a difficult situation in a nation in revolt, but are coming away from it feeling disrespected.

It has been a month of overcoming. The espalier is in OK shape (minus a few trees), and the au pair situation will be OK (minus a few days) so all's well that ends well, but I hope the summer goes smoother than this past little bit has.

Posted by littleboatiris at Friday, March 08, 2013 No comments: