The first step to rewiring the breaker panel was to make a list of all the electronica on board, all the stuff in the basement waiting to be installed, and to leave room for future expansion. The evaluation gave some insights that I had missed before. All the gauges in the cockpit are backlit. The compass has an internal light. I had a stereo system waiting to be installed. There was a spare circuit panel in the basement.

Examination of the circuit panel revealed that a number of circuits were duplicates that weren't necessary for me. For instance, there was a separate power lead to each gauge on the boat, all bonded at the panel. Rather than have 5 wires leading from one breaker, I was able to reduce it to a port and starboard run off the switch, then daisy chain the gauges one to the next. A great reduction in both the amount of wire and in the confusion at the panel, with no less risk of the gauges going dead. This same scenario played itself out a number of times.

After my paper sketches, I determined that I would install the second panel and run all the original Catalina circuits to it. That meant the mast lights, nav lights, and cabin would be on one panel, directly run to the buss off the battery switch. The original panel would now carry all the "accessory" loads and new stuff, which would include the stereo and a new GPS Chart plotter - three way gift from my Mom, SWMBO and myself. Really it is an indulgence I can't afford, but really wanted. The original panel would maintain its existing connection to the batteries.

In order to mount the new panel, I had limited choices. if I wanted to keep the panels together, I would have to move the 110vac panel to a new location on the galley bulkhead. a project that I didn't relish. I could mount the new panel near the batteries where I had already mounted a solar charge controller and switch for the shore power charger, but that space has proven less convenient than was originally anticipated. I considered a few other spots, and then it was suggested to me that others have mounted these switches on the face of the galley sink cabinetry.

The spot is very appealing as it is both close to the original panel and easy to reach from the cockpit, but I was worried about the wires contacting the stainless steel sink and arcing. after receiving assurances from a handful of folks who have gone ahead with mounting panels in this location, I got the saw going and cut the requisite mounting hole. A test-fit of the panel looked good.

I knew I would have to build a mount for the GPS Chart plotter, a welcome project after having seen both a fish finder and the handheld GPS re-enact world championship ping-pong matches in the cockpit footwell, sometimes with dangerous results. The stereo was another matter.

Mounting the stereo was vexing because it meant yet another permanent hole in the boat. It needed to be someplace that it could be killed quickly if a MAYDAY came over the radio or things were getting intense. I looked for a location as good as the one that had been suggested for the breaker panel.

I thought about mounting the radio in the vee berth, but that would not have been easy to reach to silence it quickly. I looked at the locker opposite the head, but that would have been, well, weird ("Let me sit down and choose a good 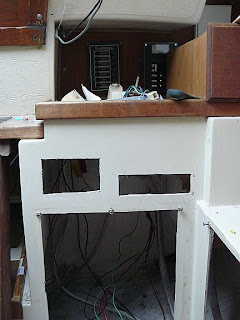 station... I'll be out in a minute..."). After much consternation, I looked more closely at the area where I was mounting the breaker panel. There was space for the stereo beside the breaker panel, but the mounting depth would be really tight. It looked like I would be shy by about three quarters of an inch for the depth needed to mount the stereo. If only the sink drain weren't right there.

I grabbed a beer and did some thinking. My best thinking seems to happen with a beer in hand.

Recklessly, I grabbed the saw and cut the hole for the stereo, I would find a way to make it fit. Maybe by angling it under the drain or something. There would be a way.

With the hole I cut I sized it for the radio. I needed a lot of help to make it fit in there. First off, the side of the "Factory Ice melter" AKA the ice box, Catalina's poor attempt at refrigeration that sucked in seawater while underway, and cooled nothing at all had a bulge that protruded about a quarter inch into the realm of the stereo, then the sink drain still looked like it wanted to encroach.

I ground down the side of the icebox. The stereo could now get far enough into the hole to almost fit. a little wiggling and I came to rest solidly against the sink's drain. Dammit. The radio was proud of the face of the fibreglass by almost an inch. I angled it under the sink's plumbing and it sortof fit the way a Kawasaki sortof fits a Hell's Angel. I could do better. 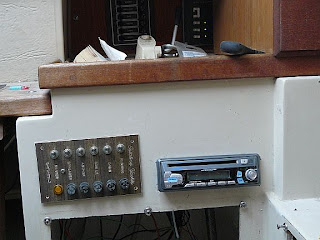 d the cupboard frames under the sink to refinish them and to make working on the wiring easier. I measured them. Nearly an inch thick. I needed an inch to make things fit. Could I build a faceplate to match the rest of the teak interior and mount the stereo to? My woodworking history thus far has included a chessboard that was immediately rejects by the king's rook, and every pawn, before the king even got a look at it. Something furniture grade and yachty would definitely be pushing the limits of reason. Really, beyond putting up shelves I was uncomfortable with messing much with the interior at all, and this task would really stretch things.

I looked at the stereo, I thought about Harleys. I thought about bikers. I went in the basement looking for some teak scraps I knew were down there. Time to learn woodworking.
Posted by littleboatiris at Monday, May 02, 2011