On Wednesday, we took Clare to the Pioneer Village.  When historical homes in the area were to be destroyed to pave way for new development, some of the houses that were in good condition were moved here.  The houses are not all from the same village, they were moved in from all over the GTA.
Clare and BB outside of the Mill 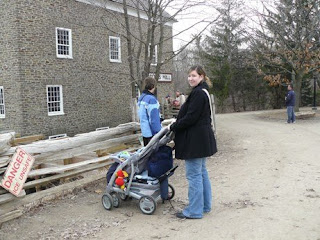 Group shot outside of the General Store 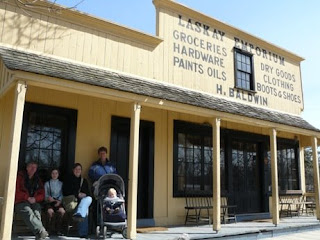 This was the first time in twenty years that the Village has been opened for spring break. Not all buildings were opened, for a couple of reasons. 1) They have to get their staff in for one week. 2) If you heat a building in the winter, it will deteriorate faster, and they will need to do more preservation work.

We visited the print shop, the outside of the mill, the church, the schoolhouse, the inn, and a gentleman's house. They had carriage rides around the village, which we took, and they had a scavenger hunt for the kids, which LR completed. There was also a dance demonstration, a spinning demonstration, and in two of the houses, they were making cookies over the fire, which were quite tasty!!
Posted by Star at Thursday, March 19, 2009