Last year I set 14 goals for our household. Trouble was each individual goat had subsets and lists and so my 14 goals was really more like 1400 goals by the time I was done. It was a hefty list, and I found that by August/September I had tripped over so many goals by trying to complete other goals that, well, the list was definately not going to be completed. Luckily there was some low-hanging fruit early on in the year to offset the stuff that we got waylaid on later. We also started into a bunch of projects that weren't on the list at all. Those were great starts but offered nothing so far as checking off boxes on the list.

1. Open up a doorway between the hallway and Dining room.

This is a total fail. I often look at the space and think I should start, but alas. It will jump to next year's list. Right now that space looks like this: 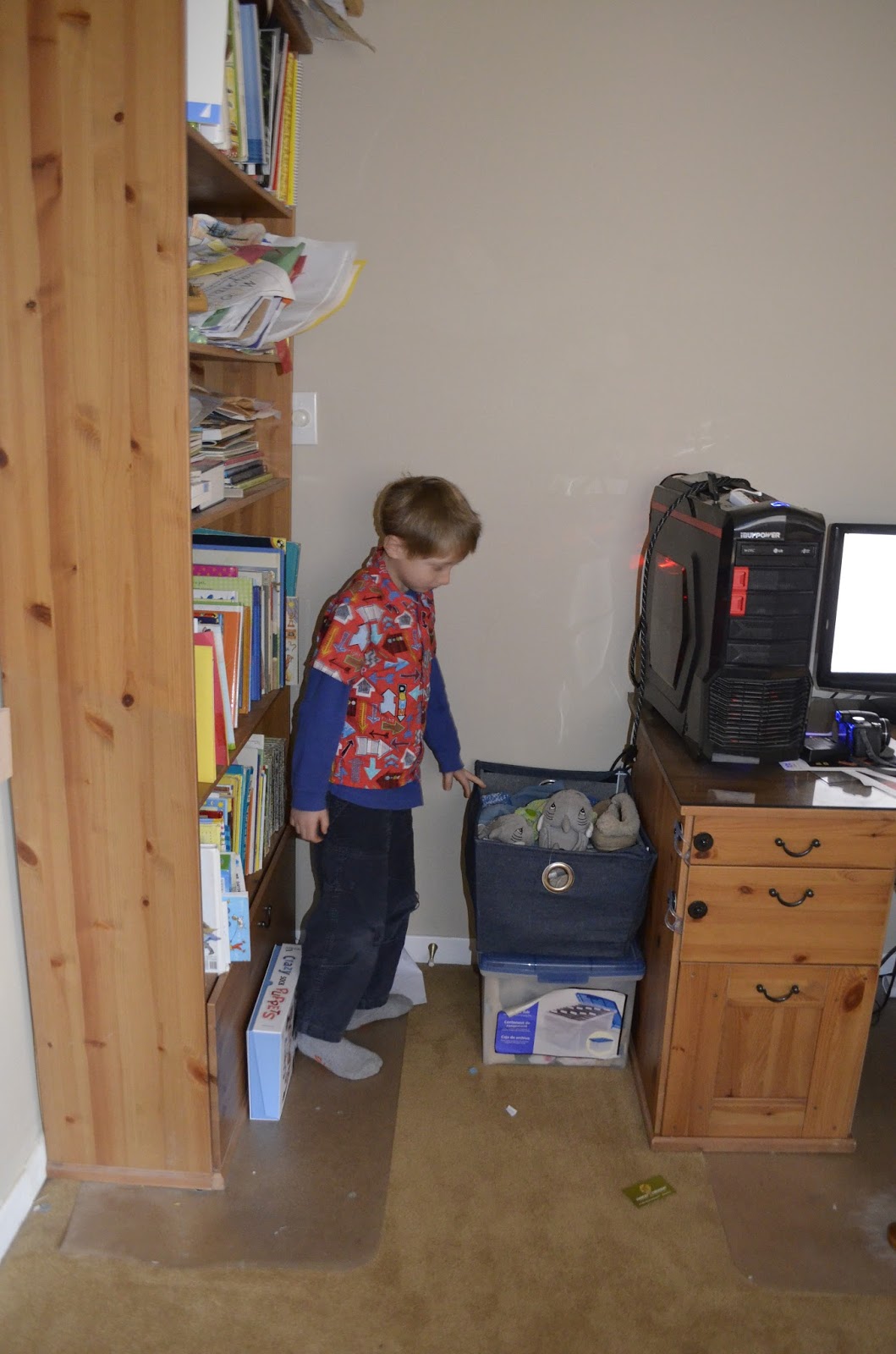 All stuff, no door. The door is waiting in the garage, so there really is no excuse on this.

We came through with family getaways for every month up to October. Then we realized that the trips were more stressful than staying home and decided to take the rest of the year off. Which we did. I count this as a success. What trips we did do produced some really good times. We spent a lot of time in Algonquin Park, camped in Ontario Parks, and tried staying in a NY State park for the first time ever. we even did a big trip on a cruise, which the boys still talk about. And I snuck in a charity race - the Warrior Dash - with a bunch of friends. 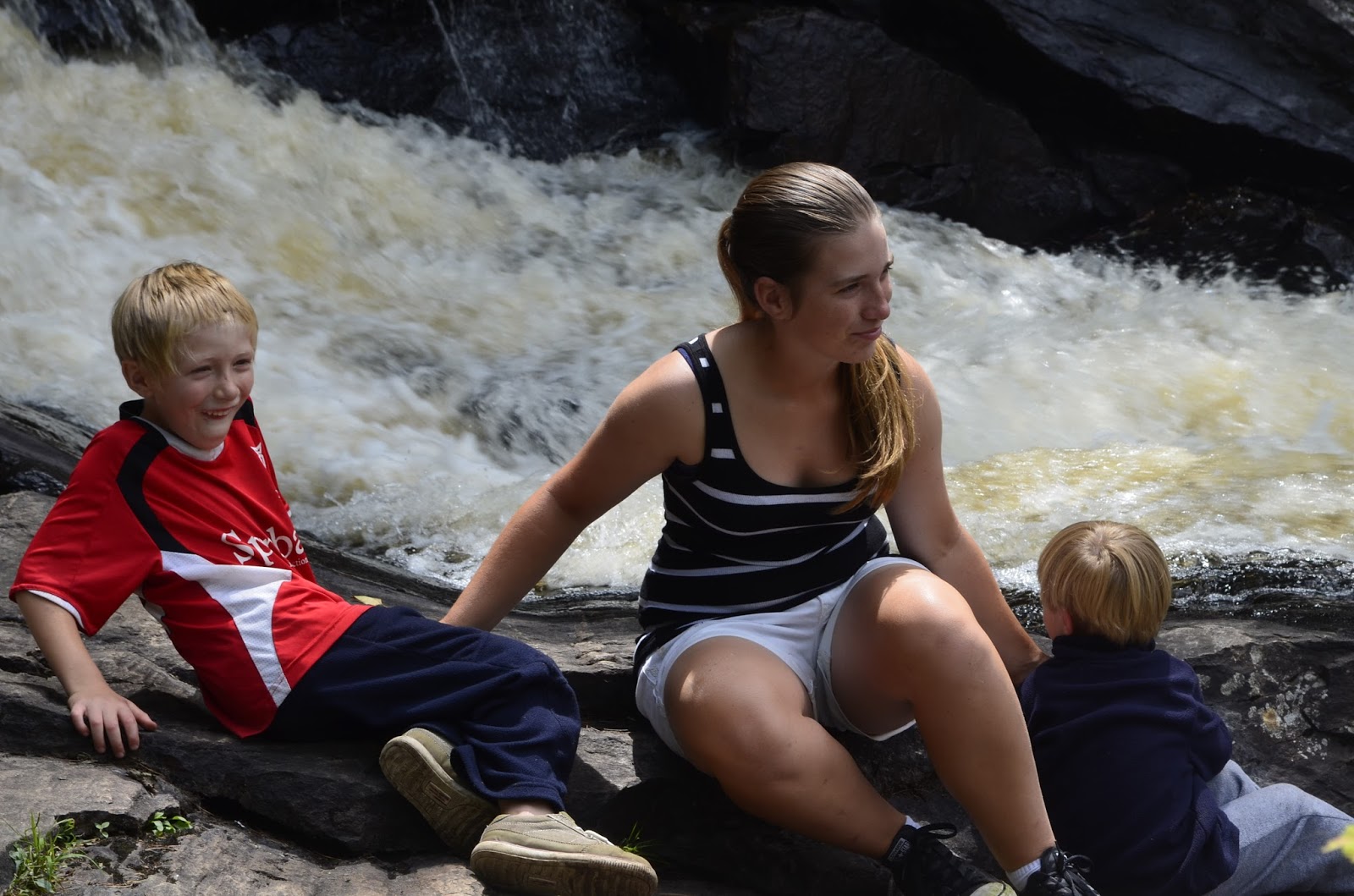 My list here is very different from what actually went down out in the garage/shop area. I did make a lot of stuff, and some of it was pretty cool. Some of it was firewood too. But facts are facts, I never built the reading wall for the master bedroom, and most of the rest of that list wasn't completed. But there were some other wins too - it turned out that SWMBO never really wanted crates in the bathroom (good thing - they turned out awful!) and a workbench for the garage was given to me by a friend. What I did make was fun and I learned a lot. I'm calling this a win despite not holding to the list. I could adjust that score upwards, but I wont. 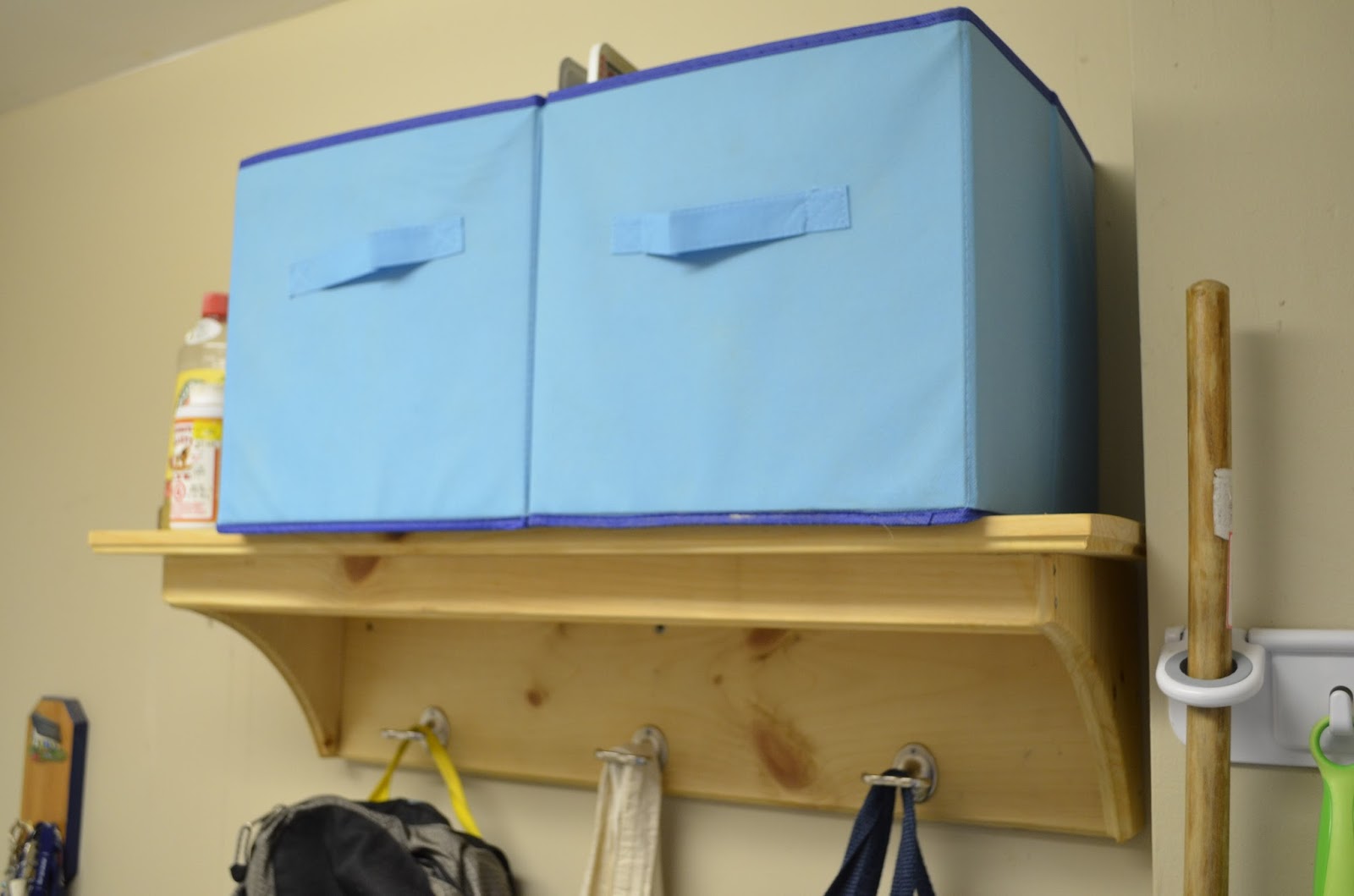 This list went down fast and I got a lot done! Especially noteworthy was finally getting closet doors up in the boys room and redoing the kitchen knobs. Small things that were good to get out of the way. 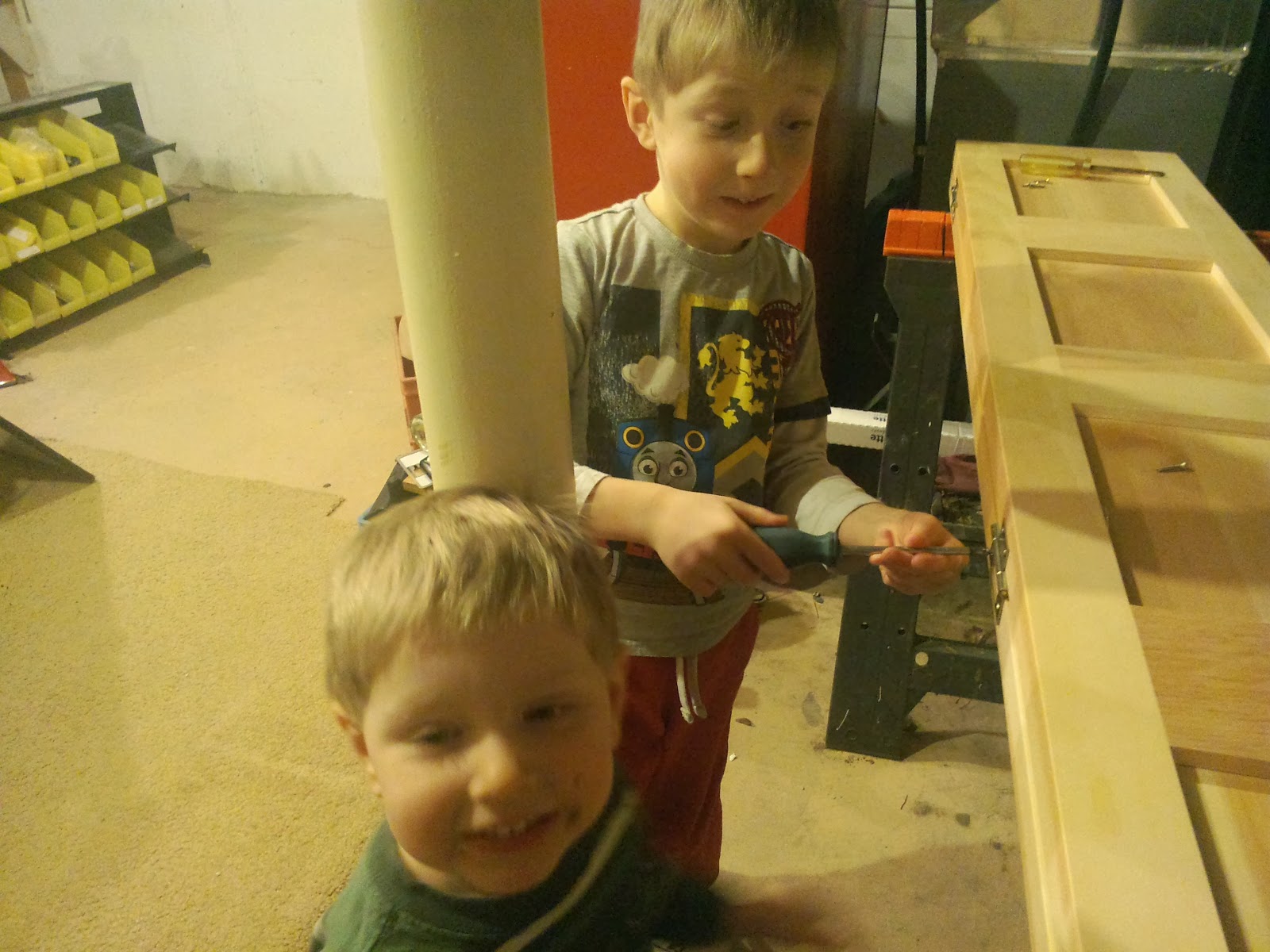 To be fair, this was a cheater goal on many levels. When we set the goal, I already knew we were go to replace the knobs, and I doubled up and put this same goal in 2 categories. I'm still taking the points to boost my score though.

We went through a long process of elimination to come up with our favourite knobs out of an initial set of about 40 patterns. Actually installing the knobs took little time compared to the process of selecting them. We are happy with our new knobs. 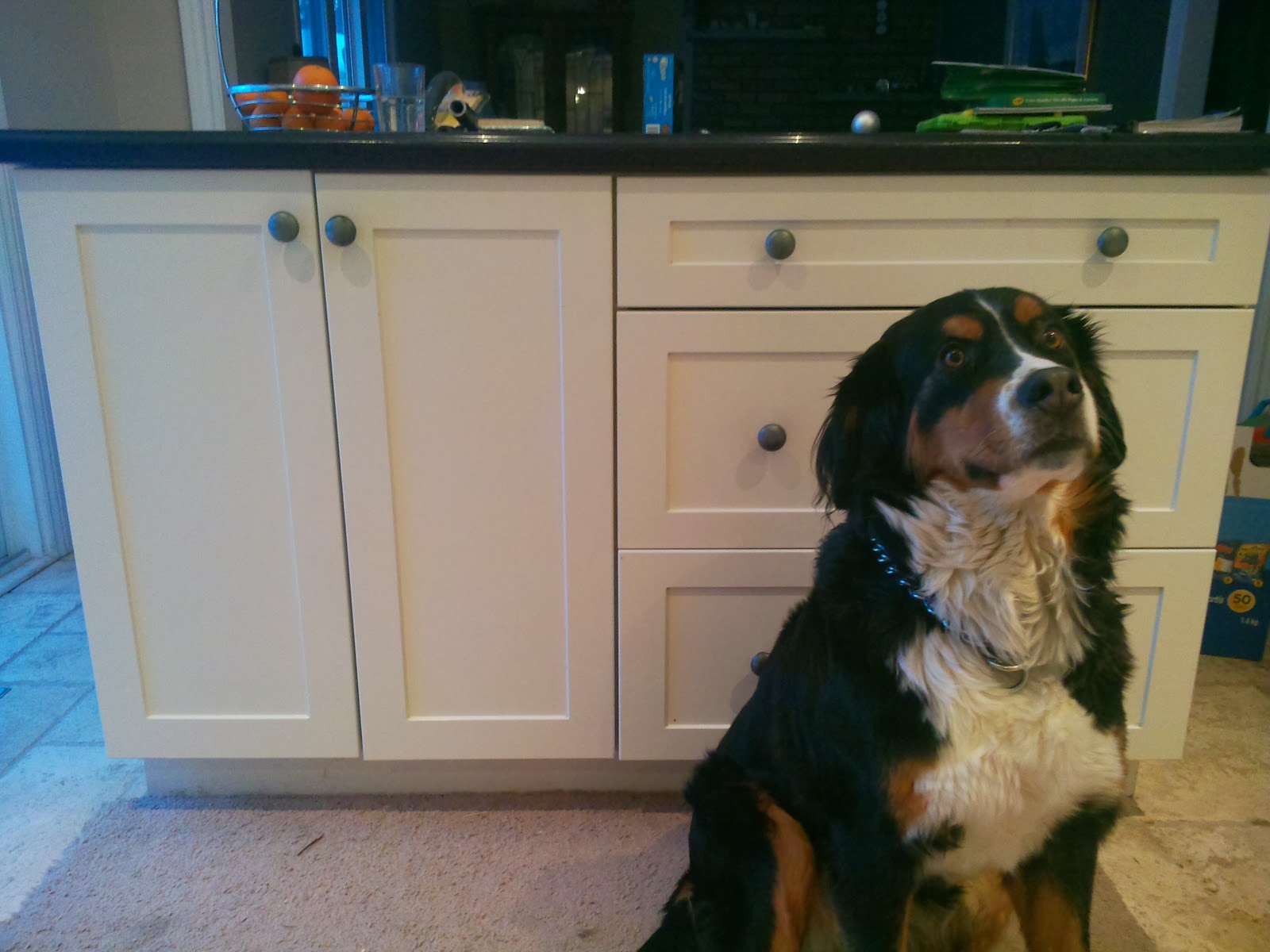 6. Clean out the garage, and create a working floor plan.

Ok, so this really was a big deal. In order to be effective in the garage, there had to be flow and workspace, and all the things we associate with a real room. I also needed to be able to move stuff around and protect space to park a car in there. Although there continues to be chronic issues with sawdust and I have just tackled the last of the lighting issues in the past week, the room is now functional. I went with a galley design, and put the tablesaw facing a garage door so that long or large pieces can be machined by opening the door. So far this winter a small space heater has been able to keep up with the cold as long as I put sawdust along the floor at the garage door to block drafts.

For Christmas, SWMBO bought me a set of anti-fatigue mats for out there, and the last piece left to tackle is storage of offcuts and templates/jigs. The space actually works really nicely right now for the sort of stuff I'm doing. I need the discipline to keep things neat and tidy! 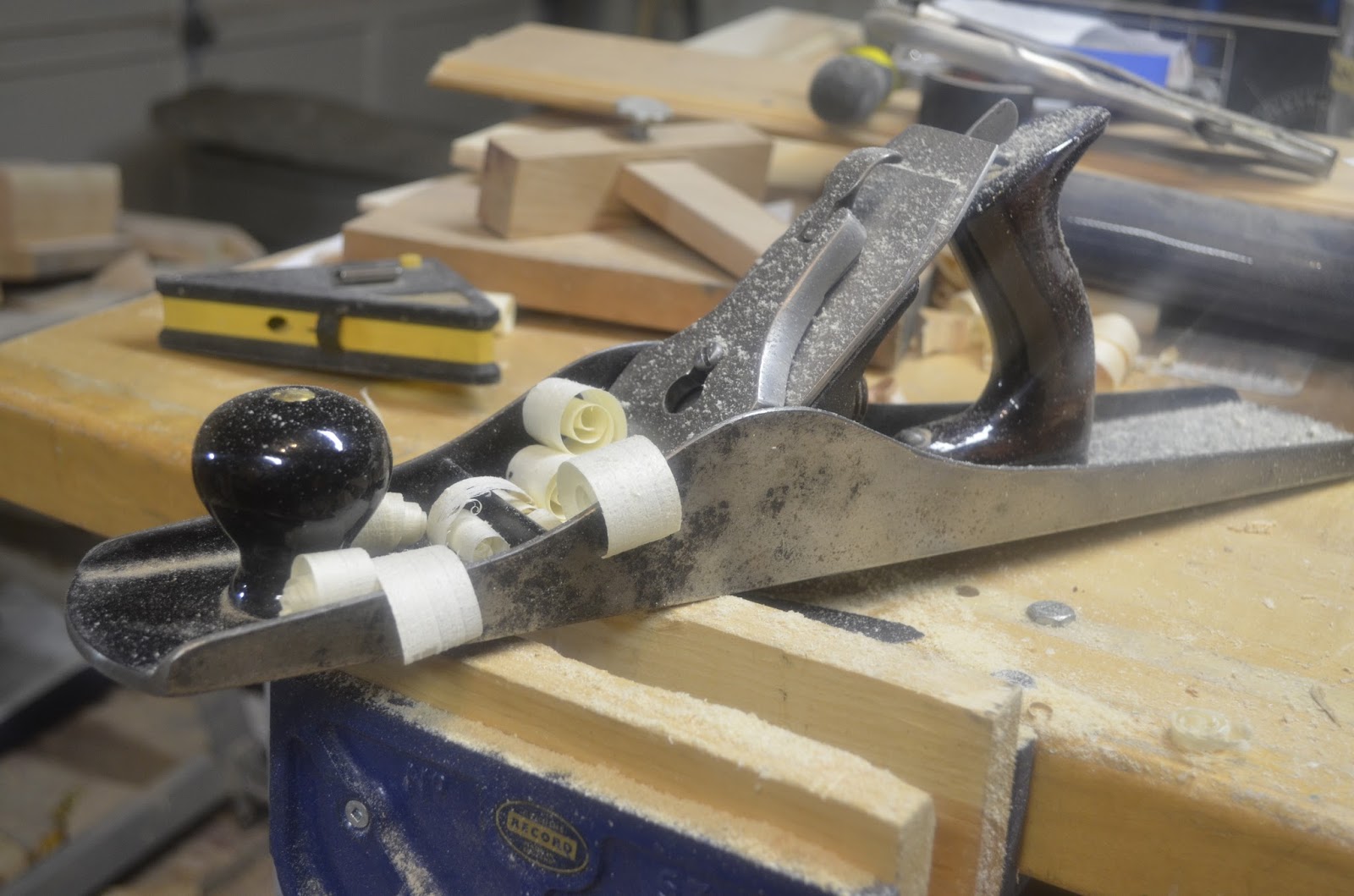 Nothing says panache like an ancient Mercedes W123 Diesel wheezing its way up the street. Ok so I got this old car and it looked like fun. It is fun, but a frustrating sort of fun too. I love this car, but it is older than dirt and barely alive. It took until summer to get it going, but now its on the road and acting as my daily driver - unless there is snow or ice in which case I share SWMBO's car. But anyways, the diesel runs (today) so the goal is accomplished. Don't check back tomorrow. 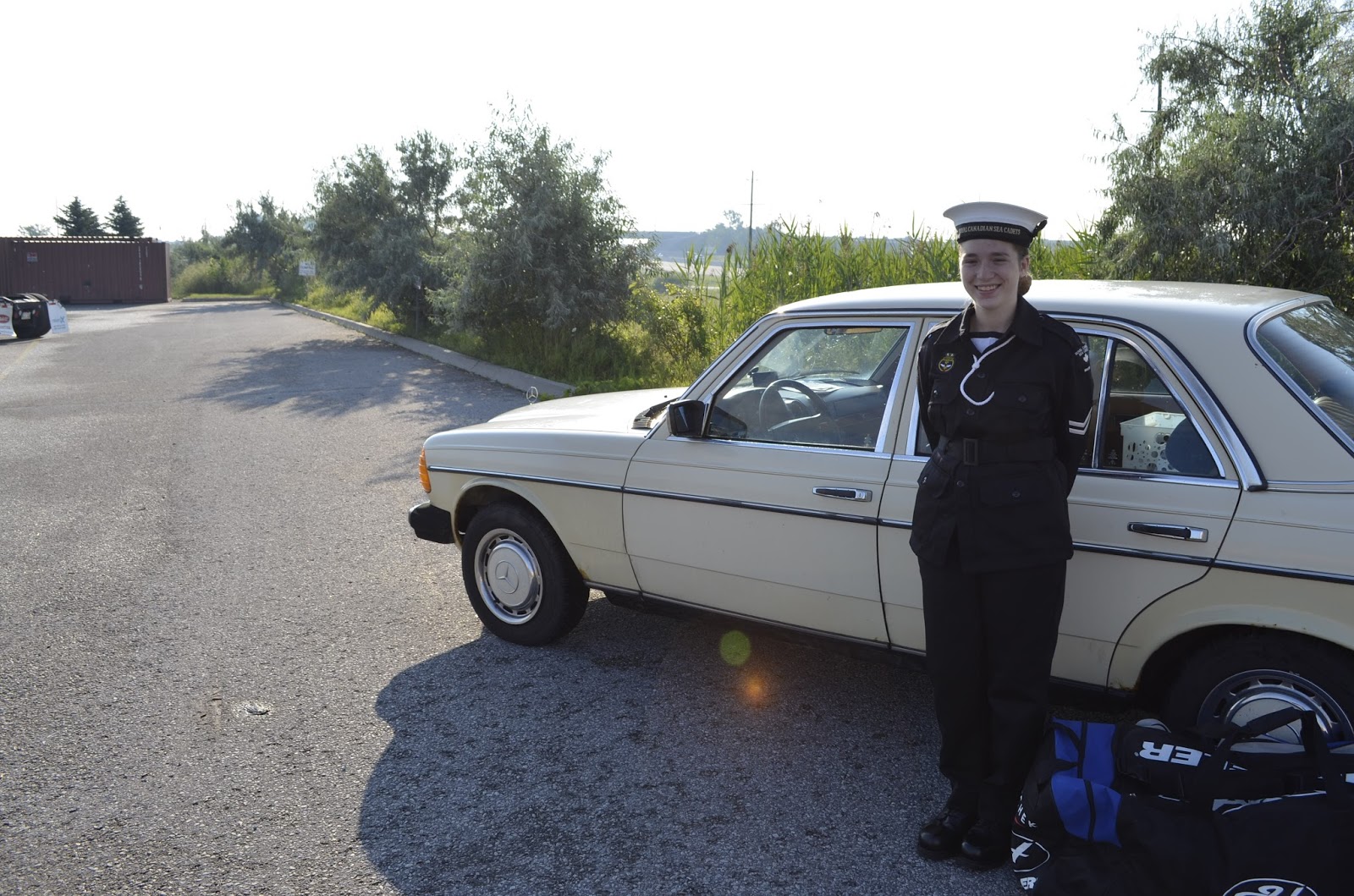 8. Add a gas stove hookup in the kitchen and heat in the garage.

After I wrote this list, SWMBO was surprised by this item - until she saw the new gas stoves with a griddle in the middle. Griddle in the middle rhymes and makes us giggle every time we walk past the gas stoves at department stores. We are easily entertained. Anyways, we came dangerously close to accomplishing this goal late in the fall when the pool heater stopped heating, but then instead of repairing the pool heater, we closed the pool and left it for spring. Now we've realized that insulating the gap in teh bottom of the garage door is all that's needed to heat the garage so the goal may change, although a more permanent garage heater may still be on my list of wants.

Griddle in the middle. He he.

Didn't even come close. The roof looks pretty tired up front though. This may soon turn from a want to a need. I keep an eye on it and I'm a little concerned. Maybe in the spring. Maybe fall, but I think this will have to be done next year. I'm still up in the air on whether to DIY or hire it out.

This became critical in the middle of summer when SWMBO and I found our income sliced by 70% due to a strike at work, and needed to cut costs. I sold the boat at a big loss, but have had few regrets. The boat was a lot of fun for me, but also ate up lots of time and money. I tell myself I can still go sailing on OPB's (Other people's boats) but also know that I likely won't. Time to move along to other things.

11. Make some (any) progress on the basement.

Well, as little as I got done - nothing more than napkin sketches - I have come up with great ideas for what I want to do. Soon I'll get going on this, but first I need to wrap up other things that have progressed until they stalled out. Believe it or not, the work stoppage mentioned above affected the basement progress through a cascade failure. I bought hardwood flooring to install in our bedrooms the week before we lost work. When we had no income, I sat on the hardwood in case I needed to return it. Now I have a couple thousand SF of hardwood to install before I even think of starting on the basement. Oh well, at least I have 2 new goals for next year now. There really is no excuse for not having the hardwood installed yet.

We nailed this one so hard! SWMBO and I even agreed on colours for it, and then we got it all done lickety split! its so much nicer in blue than it was in dingy brown. Once I get that reading wall done and replace the missing trim... well, more for next year I guess, but the goal only mentioned paint. Score! 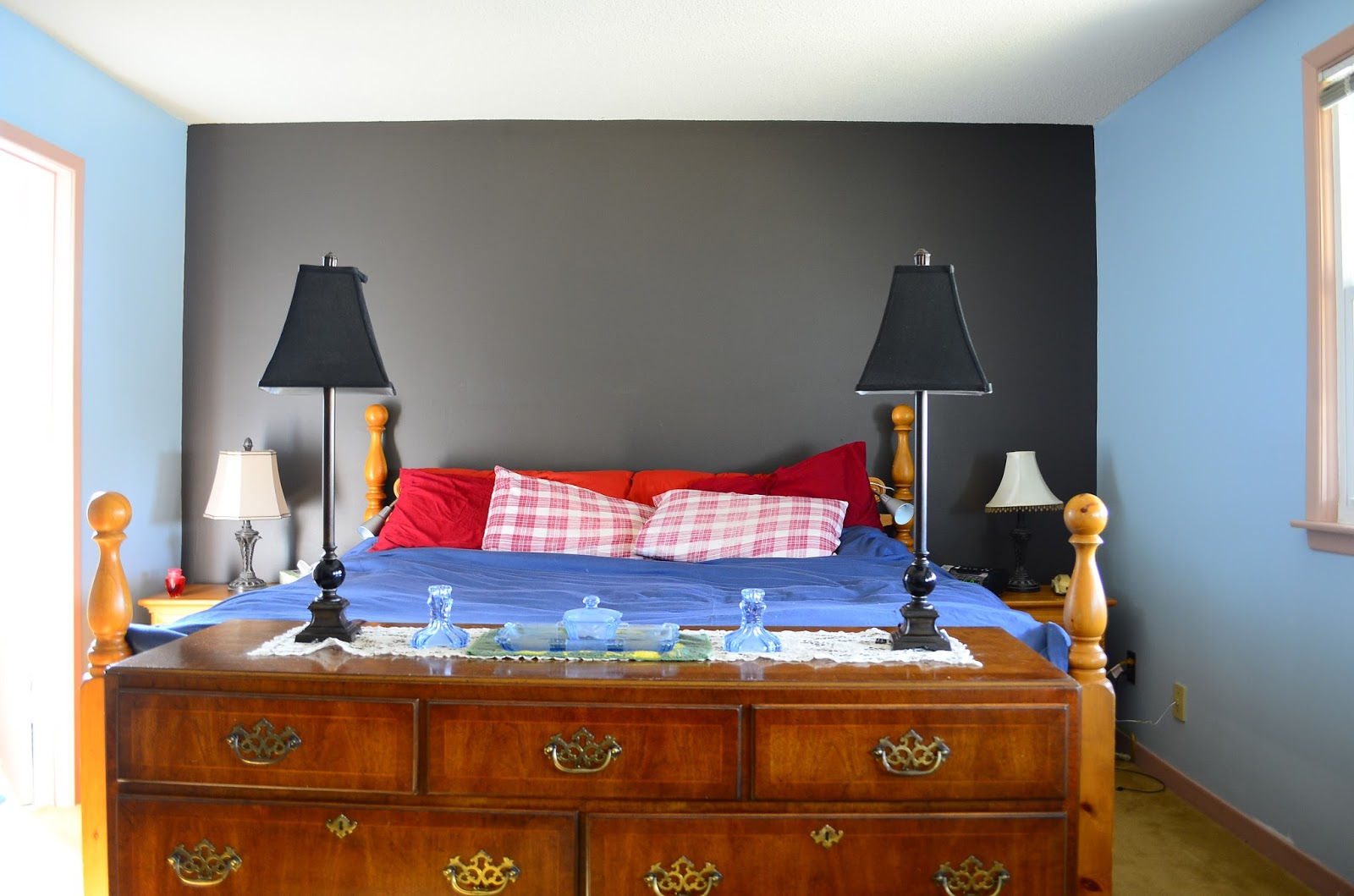 I'm allowing half-points here since I got the posts wrapped and lighting working, but I still have to string wire and put in railings. I was unhappy with the way the railings were going, and Stopped short of completion. I'm hoping to finish this off early next spring, but at least it has taken shape. half marks allowed just for how much of a pain its been.

I think we've done a great job of giving the kids a great year of experiences. Whether it was outdoors in a yurt or canoe, in the shop building stuff, snuggling and telling stories, or going to World Juniors Hockey Tournament game we've exposed them to a load of different environments and ideas, and now see them trying things, challenging things and doing things they might not have a year ago. Moving forward we need to get them more hands on and to build their confidence. I think they'll be fine. 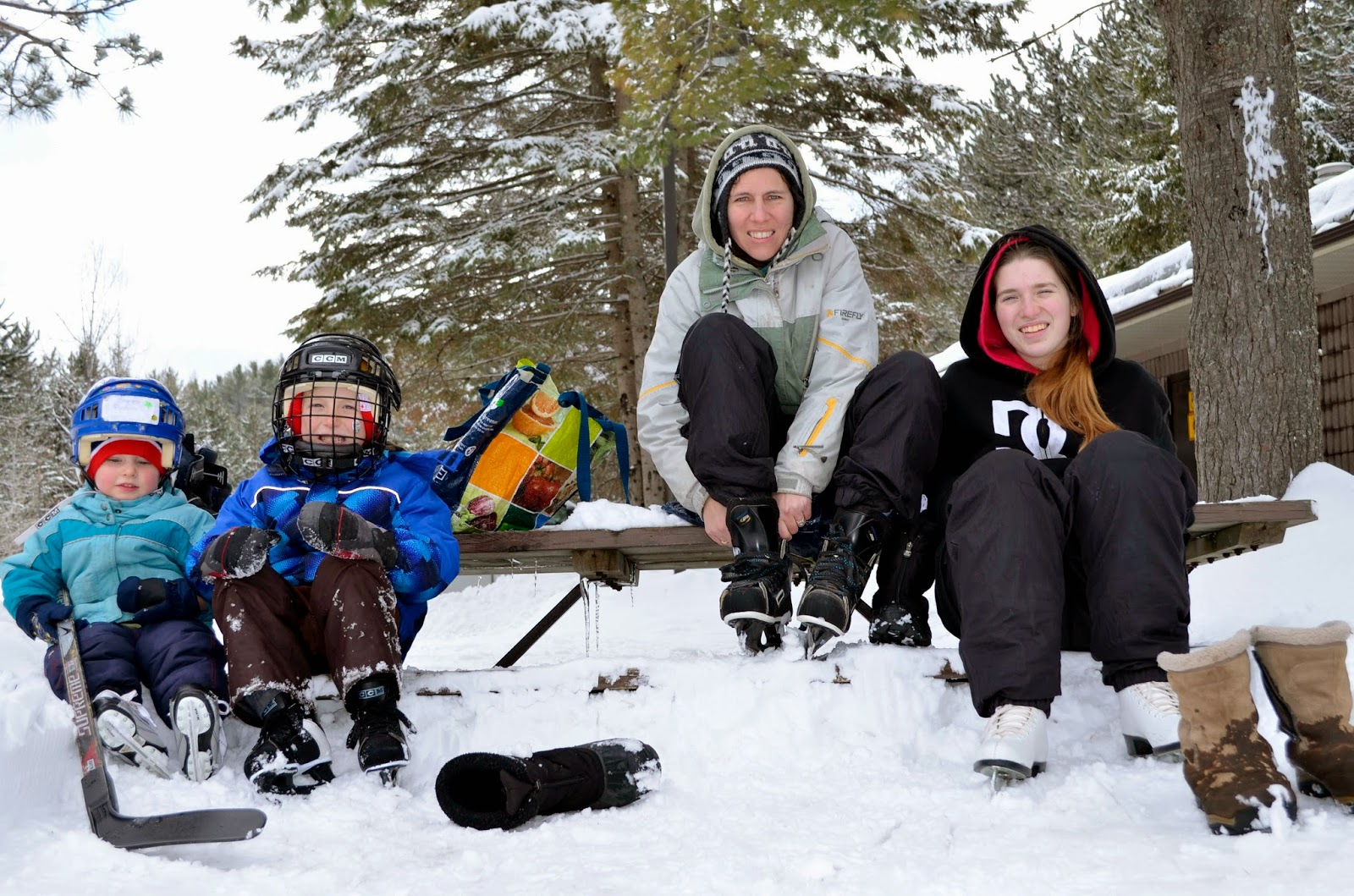 Its a Passing Grade!

What this summary doesn't show is all the challenges we overcame, and all the successes that weren't on the list above. In 2014 we survived a 3-week long strike at work, which really was a game-changer for us. In fact we didn't just survive, we excelled, bouncing back and regaining our losses through hard work and sacrifice within 90 days.

We did a lot of projects that weren't on the list above, and fit in a lot of quality experiences. We had one of the best Christmases ever with a house full of old and new friends, immediate and extended family, and a fantastic dinner. If 2015 comes close to 2014, I'll be happy. Our score may be 63%, but it feels like it should be in the high 80% range!

Happy New year to whoever reads this, and I hope your year is as good to you as 2014 was to us!
Posted by littleboatiris at Thursday, January 01, 2015