We are just back from our third Cuban vacation. This time we elected to take the boys along, and as usual Cuba proved to be fantastic. Unfortunately, the weather and the resort were not, but Cuba is a charming place regardless. Our original plan had been to wait until summer, then make a trip to the southern US, but with the political turmoil down there, and our weak dollar, we decided to do a winter vacation to Cuba instead. 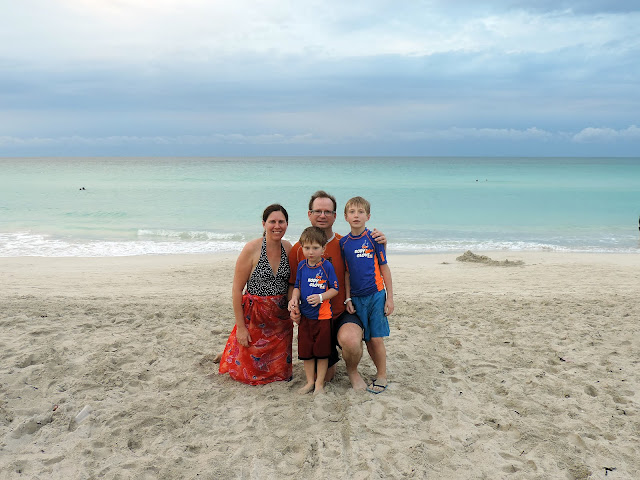 I think I'll break this trip report into bits - first on the resort and cute kid pictures, then old cars and Havanna, and then maybe a little politics and emotion, but first - the fun stuff. Resort life. 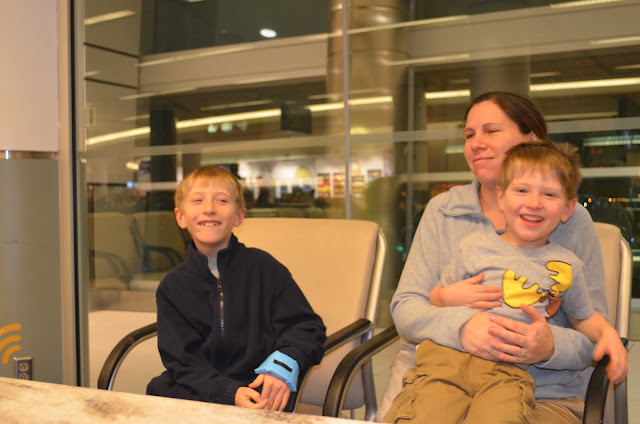 We flew out of Toronto with Cubana airlines headed to Varadero - a small tourist town featuring some 50 or so resorts strung out along a sand peninsula into the straits of Florida on the north side of the main island of Cuba. Flying with Cubana always produces 'interesting' meals, and this time was no exception.

I present our airline breakfast: 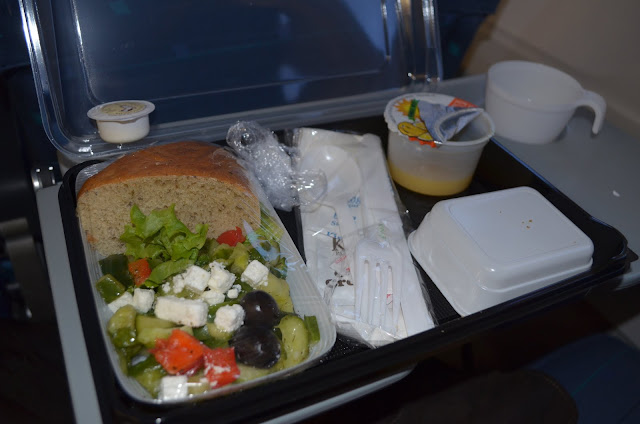 That's a greek salad, chicken breast, dinner roll, orange juice and coffee. I think the orange juice is what makes it breakfast. Not sure. Of course its still better than what they serve on Sunwing flights (nothing).

We landed early in Varadero, put our bags in the luggage locker, and headed to the beach and the hotel pool/snackbar.

The resort itself was very pleasant. The layout has a 'quiet section' and a main hotel. The quiet section is far from the shows and noise of the main hotel, which is good if you are travelling with boys. If you come to Varadero to party, this is not the section of the hotel for you. 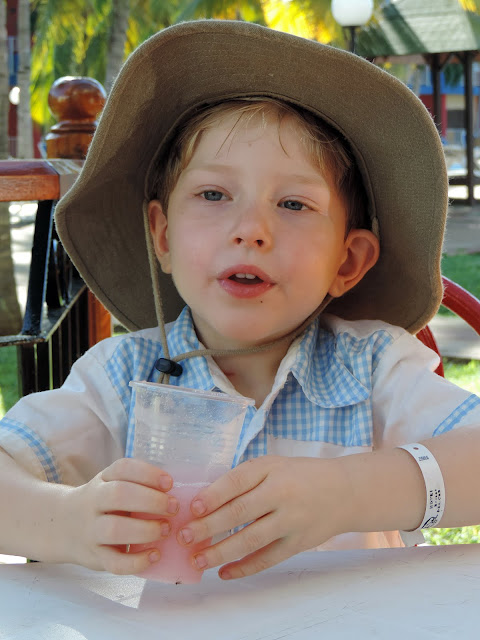 It didn't take the boys long to figure out "Uno pina colada por favor" and soon they were best friends with the bartenders all over the resort. Buddy adopted this banana tree, and checked every day to see if the bananas were ready for picking. If they had of ripened, I'm sure he would have had them for lunch.

Unfortunately, it rained A LOT while we were in Cuba. That meant it was hard to get in beach time, but we made the most of it when the weather improved to overcast, and had a really good vacation with lots of beach time and lots of trips into town, and even a few volleyball games. 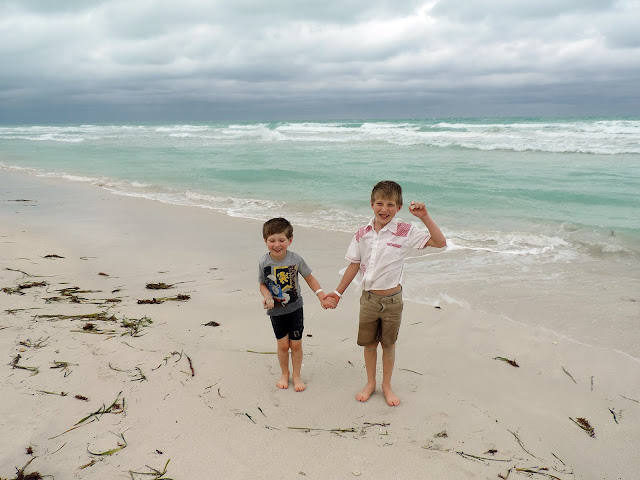 We did some hiking on the beach, and found coral and shells, and we jumped and dove in the waves too! Unfortunately, the schedule at the resort didn't allow us to catch many of their shows - although we did see an animal show with dancing puppies and a cheeky pony, and a monkey.

It rained so much in Cuba, that the rooms below us were sometimes flooded out. Despite this, guests continued to be put in them. I can't think of much that would ruin your vacation faster than having your room flooded, and when I say flooded, I'm not exaggerating. This is the baggage car between our rooms and the next wing of the hotel. It is on the cart path. Luckily we were on the second storey. 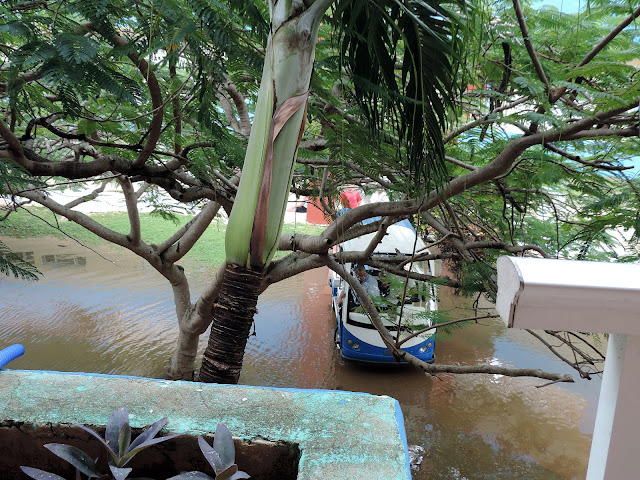 In fact there was a lot about the resort that suggested we could have picked a better spot. Things like only hand towels in the room (no shower towels at all!), no beach towels until day three, very late meals, and then long lines to get in, beds with only one sheet on them, no pillows to speak of, many sick guests (food handling??), and so on. Its not a resort we'll return to.

Despite all this, the vacation was really quite good. we rode a Cocotaxi into town, and did some shopping, and we took an old car for a ride. There were bands playing music all over, and the bartenders were always friendly. 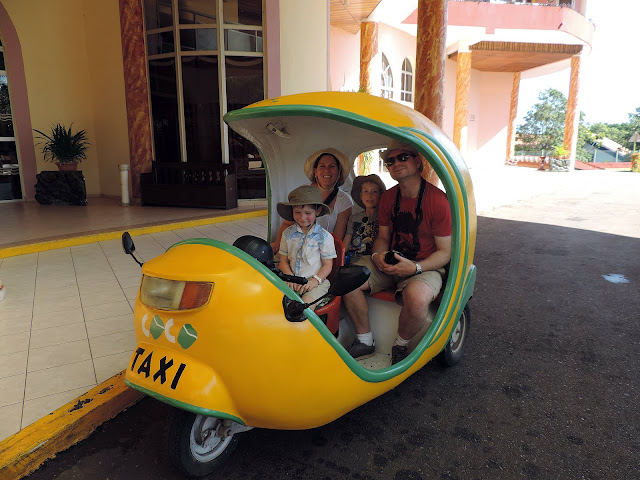 So what made the trip good? Well, a mix of things. We made friends with some really great people, and we brought along some card games that are really a lot of fun for all of us (seriously, get Saboteur - everyone loves it!) and when the weather was really bad, we just laughed and ran in the rain. Sometimes, that's all you can really do! 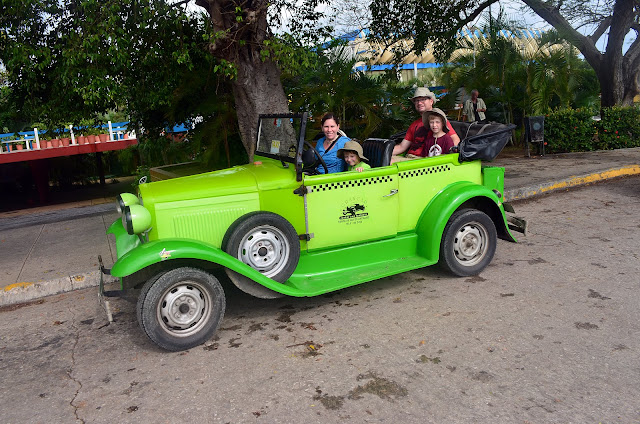 Posted by littleboatiris at Monday, January 18, 2016