It is spring again. Every few days we see another sailboat head down our road, pulled behind a behemoth of a pickup truck and headed for spring launch. If only we were so lucky. It will be weeks before Iris is ready for launch. In the meantime we work to prepare her, and try to squeeze in all our other obligations.

Many of the other folks who are trying to get boats to marinas have asked how we manage our mast during transport. Some folks lash their mast right on the deck, some have special fixtures on their trailers for the mast, and some take the mast in a separate load. On Iris we developed our mast stowage system as one of our first projects, and it has been of lasting value ever since.

The system we use was developed so that it could be part of our winter tarp structure. It sits high enough that the pop-top can be opened without affecting the mast while the mast is laid down. It sits 6" shy of being an over sized load on the trailer so it works fine for the trip to and from the launch crane. It is also secure enough that we used it during our transit of the Trent Canal without having any worries despite rocking and rolling from the wake of passing powerboats. It has been very good.

So what is the system? Well, it comes in 2 parts. First the mast-step support. 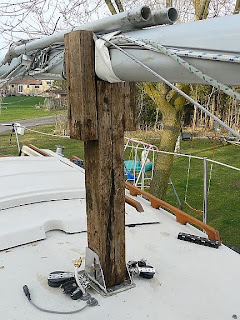 The mast step support is simply a stump that the mast rests on at the mast step. We made it by nailing a pair of 2X4s together, but were I to make another, I would simply use a 4X4. At the top of the 2X4s we formed a goalpost by putting 2 more short pieces of 2X4 outboard of the stump.


The second component is the transom support. This support is at the back of the boat and sits in the channel at the back of the cockpit footwell. it is formed with 2 2X4 uprights and a pair of crossbars. the upright supports are just clear of the cockpit drains, and go from there up on an angle to the pushpit rail. The top crossbar is set to hold the mast above the raised pop-top. A pair of tabs are set to hold the mast from sliding left-to right while underway. 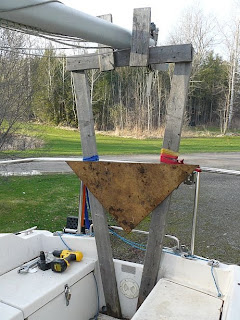 Made entirely with scrap lumber in less than an hour, the system has served us well. When I went to take these photos, I realized that one of the cross-pieces on the transom support was badly split and needed replacing, so I put on the triangle of 3/4" plywood you see in the photo below. I guess even a system as good as this needs some maintenance.

So far our only problem with this setup has been marinas mistaking it for scrap lumber and trying to dispose of it for us.
Posted by littleboatiris at Wednesday, April 27, 2011