Today's post is brought to you by the letter A. I didn't plan it that way, but its what we've got.

In your garden, have you ever noticed trails of ants running up and down the stems of your plants? Have you ever wondered what the ants (who are normally scavengers) are doing on your greenery? Well, if you pay close attention, you will see that those ants are actually farmers, and what they are farming is honeydew - produced by aphids. 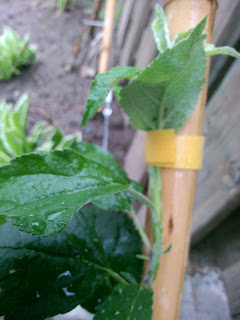 While I'm not a fan of aphids munching away on my young espalier, this is one of nature's symbiotic relationships that I find mystifying. It's right on the edge of science fair material for me, except that I'm too old for those any more. But anyways, lets look at this relationship, and then talk about how to stop it.

Aphids will survive Canada's cold winters, but not well. Ants like to have a supply of food on hand. Honeydew is good for that. So the ants help the aphids get a head start on other garden pests the next year. 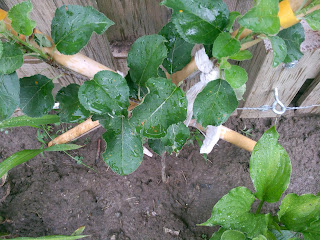 In the summer, ants will gather "slave" aphids and place them on plants near their nests. These aphids are milked by the ants to produce honeydew,  a sugary liquid excreted by the aphids. The honeydew is stored up by the ants as part of the colony's food reserve. Come autumn, the ants will carry the aphids' eggs underground, into the ant colony where they will be put "in storage" well below the frost line until the eggs hatch the following summer.

The aphids are then carried to the new shoots of young plants where they will feed and be milked for a new crop of honeydew. Through the summer, the ants will defend the aphids from their natural predators (ladybugs and wasps) and will move the aphids to the new shoots of new plants as they emerge. A pretty cool situation - except that the ants are pretty ruthless slavedrivers.

Nature has given aphids the ability to fly, but only if conditions are too crowded, and only in order to lay eggs farther away. Ants will actually tear the wings off aphids to prevent them leaving with their eggs. Also, the ants have so 'domesticated' the aphids that in some cases the only way for them to poop is if an ant is milking them. Not exactly fantastic if you're an aphid.

For us, the ant/aphid situation isn't really very bad right now. The aphids are there, and the tell-tale yellow spots are on the leaves of some of the espalier, which gives away which trees have ants and aphids on them (if you see spots, watch for ants. If you see ants, flip a young leaf over and look for aphids). The spots are a little ugly, but really its only cosmetic damage the aphids are doing.

To solve the problem, a 3-pronged approach is needed.
1. Protect the plants with natural predators like ladybugs or parasitic wasps
2. Attack the slavedriver ants by using Borax and diatomaceous earth
3. Attack the slaves by first spraying with a strong stream of water, then spraying the plants with "Murphy's Oil Soap" which will coat and kill soft-bodied bugs like aphids.

Whatever you do will have to be ongoing until all the eggs layed by the aphids have died. And one aphid lays about 100 eggs per day. Those ants will be moving the eggs to protect their herd, so you are really trying to break a strong cycle here. Good luck, and happy aphid hunting!

See how the Espalier Garden popped in 2014 here!

A friend asked whether ants also shepherded scale insects - something I had never considered before, so I did a quick Google hunt, and waddaya know, University of Michigan has done pretty cool research on the correlation of ant colonies to scale insects as they relate to the power function.

Here is a closing statement from the brief on their research (full text available here: http://www.ur.umich.edu/0506/Feb20_06/12.shtml) - the geek in me loves when math and nature explain each other.

"Considering everything they know about the system they've been studying for the past eight years, Vandermeer and Perfecto came up with an explanation for both the power function and the deviations from it: Scale insects looking for a home encounter coffee bushes at random, and the population on a particular bush grows as insects that have taken up residence there reproduce and others join them.

At first, large numbers of bushes have few or no scale insects, just because none happened to find them yet. That accounts for the excess of bushes with few or no insects and explains the deviation at the low end of the graph.

Once all or almost all the bushes have at least one scale insect, all the populations increase exponentially, giving rise to the typical power function.

On bushes with no ants to protect the scale insects, predators and parasites impose limits on how large the scale populations can grow. But on bushes where scales enjoy protection, their numbers can reach higher levels. When the researchers excluded the ant-infested bushes from the sample, the deviation from the power law disappeared.

The protection given by the ants explains why so many coffee plants have extremely high populations of scale insects, says Perfecto, an associate professor of natural resources and environment."
Posted by littleboatiris at Tuesday, June 25, 2013