Despite our best efforts to neglect it, the garden is coming along nicely. A mystery flower has sprouted in the weedy section. Maybe its a weed. Maybe its some exotic something that is on seven endangered species lists and is worth more than my car. Actually my car isn't worth much. Anyways, if you know what this is, clue me in: 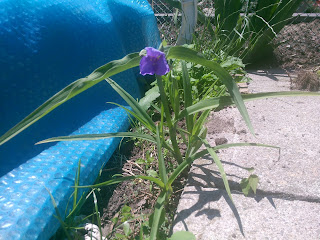 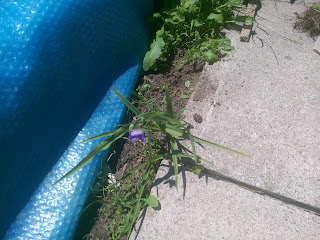 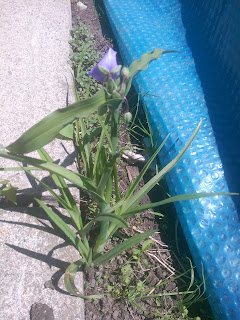 yeah, its brutally weedy back there, and maybe this is just crabgrass gone wild. I dunno. For now I'm calling it 'purple orchid extreme'

In other news, the espalier is doing all kinds of stuff. Mostly its cool, but some is confusing. Coolness looks like this: 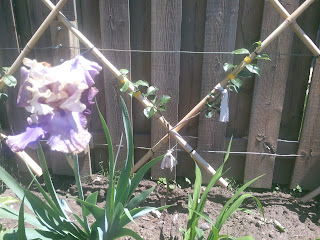 I got that iris in there to make it look supercool. Anyway, see the apple tree growing up the bamboo, that's how the espalier is supposed to work. That makes me happy. 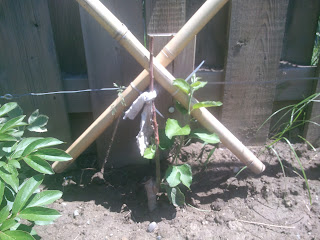 Another dilemma... this tree only grew one leader. I thought that if I leaned it over, a second one would sprout at the bend. Alas, no such luck. I need to cut this back to the bottom cross in the bamboo framework and hope it sprouts 2 new leaders. I snuck in a hardy hydrangea in the foreground so it would look like we have some good stuff in the espalier garden too. 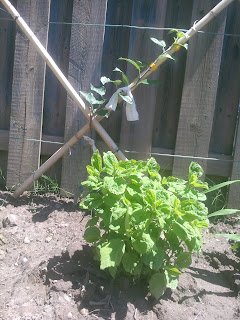 I'll close out with a success. in the photo below, you can see 2 new leaders coming out of the leafs where I have cut off the main leader on this branch. This good stuff, this what's supposed to happen! 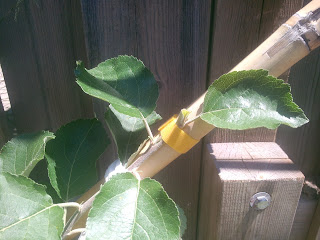 In my next update, I talk about Aphids attacking the apple trees!
Learn more about this symbiotic relationship here!

Posted by littleboatiris at Wednesday, June 12, 2013