Lately our oldest boy has had a string of greatness. It started with breezing through swimming lessons a level ahead of himself. He needs 3 more checkmarks to pass, but hey, we enrolled him ahead of where he should be, so its all good!

Then there was his award in school. He was awarded a special prize for "Trying Hard" I think the teacher was trying to say he put out a lot of effort in things he finds tedious - he's ahead of the curve in math, and tends to lose interest quickly. Too bad the teach is overloaded with students and can't push Buddy to new challenges in order to hold his attention better. We had him adding and subtracting single digits before he started Junior Kindergarten, now he's bored with math :S

At the same time, he struggles with literacy. He can zip off the alphabet like its nobody's business, but he can't find words that rhyme, and he can't tell you what letter a word starts with. He hears the strongest letter in a word, and decides that that is the letter that should represent it. Maybe he was trying hard to tackle his literacy demons. I'm not sure.

Maybe we can get him into Kumon or a similar program for the summer. Anyways, here he is at the awards ceremony, in front of the whole school to get his certificate. 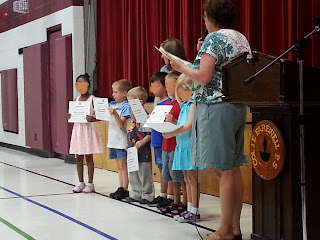 This week, Buddy started a new venture - Piano lessons. He has been D-R-E-A-D-I-N-G starting piano lessons ever since I suggested it to him about a month ago. I tried bribing him by pointing out there would be a ride on the city bus to get to the school. Then I tried pushing treats after class. Finally I went with public performance, and he thought the idea of a recital "concert" sounded fun. But he really didn't think he needed lessons, after all, he plays the piano in the living room just fine. (Thumping the bass keys - Oh my ears!)

Mama came home from work yesterday, loading the wailing child into the car and drove him downtown to the Whitby School of Music, where we had enrolled the boy into the PianoKids program. 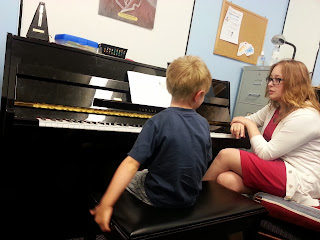 Hi teacher is really nice (he told me so) and he can play middle C now, after just one lesson. He even showed me all the Cs on our piano at home. He needs to practise playing middle C this week. Its his homework.

Yay Buddy - maybe soon we will have more than "Hot Cross Buns" your repertoire!

We are hoping that the music program will backstop his mathematical pattern-making strengths, build confidence, and make sounds more relevant to help with his reading and literacy. I hope it works. For now, as long as he is interested and having fun, I'm a happy Dad.
Posted by littleboatiris at Friday, June 21, 2013

Email ThisBlogThis!Share to TwitterShare to FacebookShare to Pinterest
Labels: Boys