I spent a bunch of time making the parts for the next phase of the project. Little pieces that are quite pleasing to look at - if you know what they are going to be...

So why did I go to bed so late? Mostly because I was busy swearing at my saw.

You see this little project is coming along nicely, and I'm happy with how the tinkering has gone thus far, but now I am into the detailed work. Last night I was cutting tenons in those little pieces, and trying to get them to an exact size so they would fit an exact spot. That's how tenons are supposed to work. And if you cut tenons on a table saw, what you do is you set the blade to an exact height, and clamp the workpiece to a fence (I used my crosscut sled) and then everything stays precisely right to make the cut.

Unless you have my saw.

My saw, which I bought at a great price, second hand, has this sort of mystic ability to know when I need an exact height, and then reset itself to bizarre depths of cut. So last night I cut one tenon just right. Yay. For the next piece, the tenon came out looking like an arrow head. Which is not cool.

So I decided to fix the saw once and for all. I ripped apart as much of it as I could and found the adjustment thinggy that is screwed up. And that adjustment thinggy - well it lives in the bowels of the saw and can only be reached if the entire saw is dissected. You basically can't get there from here. Which means that to complete this project (and start the next, which SWMBO has already shown me she needs) I need to take about a week off of projects to rebuild the saw. 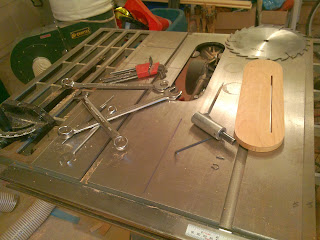 Once the saw is rebuilt, I can only hope that I can get it back together and properly adjusted. Adjusting the whole saw will be a good exercise in tinkering, but its a very precise bit of work to do, and this style of saw is not built for that. A proper cabinet saw - yeah, but a hybrid like this - well it would take a lot of work.

So I dunno what my next steps are.

<Kicks saw and walks away>
Posted by littleboatiris at Friday, September 13, 2013