How Many ____ Does it take to Change a Lightbulb?

Changing a light bulb hardly seems like a blog-worthy post, but in this case, it really really is. Let me give you some background.

A few weeks ago SWMBO came in and told me a lightbulb had burned out on her Buick All_re. It used to be a 2007 Buick Allure (I think its called a LaCrosse in the states), but that was before the incident that saw the 'u' fall off the back of the car. Also the letters from the dealer sticker fell off so it now says 'URGE' across the back of the car where it used to say SURGENOR, but I may have helped that one along.

In any case back to the headlights. This isn't a car blog, and this car is hardly blog-worthy. Its just a grocery-getter, stripped down with the most basic options, but it has pleased us, and so the headlight debacle surprised me, and I post this as a PSA for others with similar designed vehicles trying to change a light bulb. 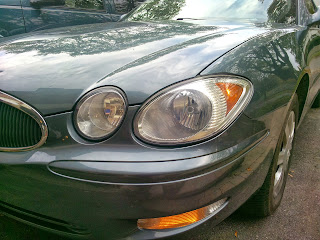 A few days after SWMBO told me about the dead light, I ran to our local NAPA and bought a replacement bulb for $20.00 (Wow! that was more than I expected!) and popped the hood to replace the bulb. This is what I found... 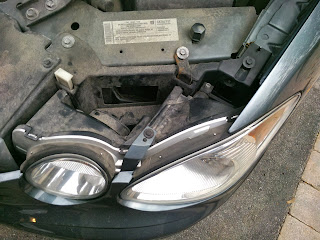 The headlight housing has a pop-out in the back for access to the bulb. Its a twist off and seems fairly innocuous, until you realize that it only reaches the high beams. To replace the low-beam, which is the more likely bulb to fail you are going to have a hard time. The low beam is the outboard light, the one closer to the curb, and the pop-out for it is firmly seated against the steel cross member that forms the front of the engine bay. I really didn't have time to fiddle so I left it for 'later' and set to work with other things.

Then the light on the other side went out, and I couldn't procrastinate any longer. That's where this blog post comes in. I was so amazed at the level of complexity required to change the lightbulbs on this car that I figured I would share it so other Allure drivers left stranded on the side of the road in the middle of the night would at least have a fighting chance at changing a headlight. Here we go...

You are going to need a handful of tools for this job. As a minimum, you need to following: 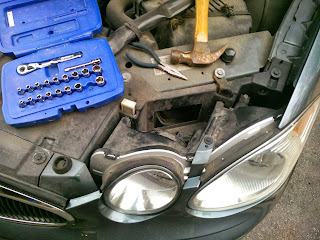 Start by removing the plastic clip that attaches the bumper cover to the top of the headlight assembly. To remove this, pull up on the centre button of the clip with the pliers or a pry bar, leaving the larger piece behind. The centre acts as a wedge to force the outside into place. Once you have the centre button out, the rest of the clip will come out easily. Put it someplace where you won't lose it. By the time this job is done, you will have 4 or 5 items in that place, so if you have a parts bowl that would be handy. I used the socket kit as a storage container. 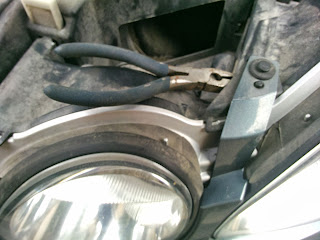 Next remove the bolt at the back of the headlight housing. You will need the 10mm socket for this. It shouldn't be done up too tight, but it is a long bolt. it has to come all the way out. 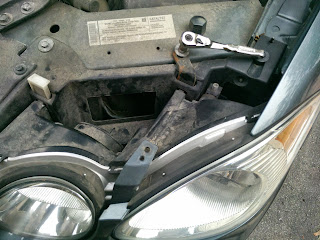 Next in line is another fender clip. Once again remove the centre first, then pop off the outer clip. This one is a little trickier though since the centre pin is recessed into the circle formed by the clip... 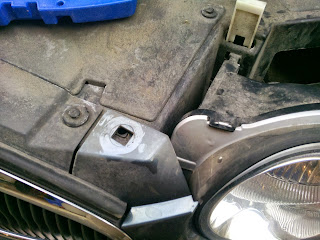 With that done, its time to remove the headlight housing. The white plastic tang in the photo above, and the black metal tab that the first bolt we removed went through both have cutouts in the back that accept a receiver in the headlight housing. In order to remove the housing, you have to pull up both the plastic tab and metal tang. The plastic one is easily lifted by hand, however we found that the only way to raise the metal one was to use the claw end of the hammer to pry up the metal tang. Be sure the hammer is seated on a steel crossmember and not plastic, or you may break something very expensive.With the tangs lifted, and the pop-outs aligned in the back of the light, gently ease the housing forward while pulling the bumper trim away from the light. 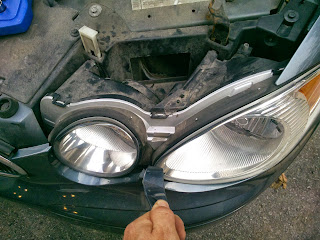 In the pic above, you can see both tangs raised, and I'm pulling away the bumper trim. The circles around the bottom of the light will hold on, and the steel fender will make it difficult to remove the light. It will take some gentle persuasion and wiggling to get the light to come free of the car. Be careful not to break the housing though unless you have a couple hundred dollars for a new one. 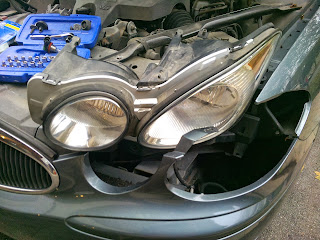 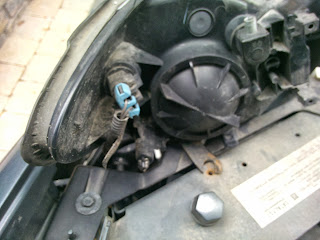 With the housing free, you can finally get at the back of the lights to replace the bulb. Remove the round protective cover by twisting it off (1/4 turn is all it takes) and the light will be inside. 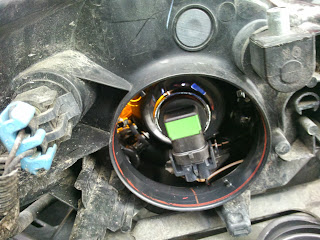 Twist the light 1/4 turn and it will come free of the socket. Then pull back the barbs on either side for a standard replacement. Pretty normal connector for most GM electric. You are now ready to put in your new bulb. 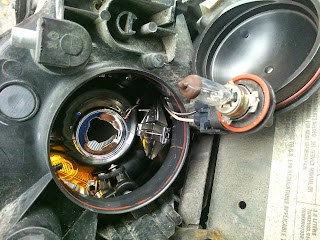 Since these cars take halogen bulbs, put on a pair of nitrile gloves before taking the bulb out of the box. If you handle the bulb with your bare hands, you will considerably shorten its life. The nitrile gloves will prevent the oils on your skin from contacting the light, and will allow you to handle them as if with your bare hands. Just be careful not to cut through the gloves with metal bits around the base of the bulb.

For assembly, just do the reverse to get everything back together, once again being very careful not to damage the headlight housing.

So why does this bother me? well, hardly anyone has this array of tools in their car, and even if they had a spare headlight, it is unlikely that in snow or rain this much work could realistically be expected of a normal person on the side of the road. Certainly, there are some guys (like my friend Jim) who have changed a timing belt on the freeway, but those guys are few and far between. The safety factor of it being impossible to change the lightbulb could be huge if you lost that light far from home on unfamiliar roads.

I understand that vehicle manufacturers want to see folks more and more dependent on their service departments, but this is just silly. It looks like we need to equip our car with a basic tool set in case of more hidden gems in the basic fixit family.

Good luck on your repair, and stay safe on the road!


Posted by littleboatiris at Wednesday, October 16, 2013

Email ThisBlogThis!Share to TwitterShare to FacebookShare to Pinterest
Labels: Cars