It was about a week ago that my friend Gretchen over at Boxy Colonial mentioned she was doing a pumpkin themed link party. Never having been in a link party before I though that sounded fun, and with visions of cocktails and formal wear, I said I'd be there. I shone up my cufflinks.

Apparently dress for these things is casual. They are a virtual party - one where everyone shares ideas, and you mix your own cocktails. And cufflinks are not needed, just weblinks.

In keeping with the pumpkin theme for the party, I considered and discarded idea after idea, finally settling on giving a new recipe a try. When God created the world, he saved Southern Cooking for last, and for good reason. It is perfection, and not a thing to be trifled with. So when my good friend, and talented chef Sandy Netherton shared her recipe for a southern dessert - Sweet Potato Pie Cake, I jumped on it as my link party crowd pleaser - I would just need to adapt the recipe a little, and rename it.

Sweet potatoes are not pumpkins, and this was a Pumpkin Party after all. So the Sweet Potatoes traded places with pumpkins, and voila! I'm link-party friendly. Here it is - The Pumpkin Not-Pie, Cake: 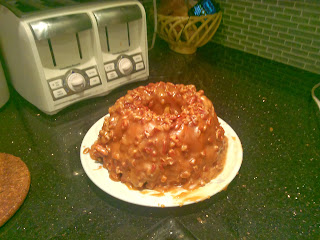 The recipe appeals because it is one of those user-friendly, low effort deals that uses pre-mixed stuff that comes in boxes rather than depending on from-scratch baking that interferes with concurrently preparing dinner. Since Thanksgiving is only a week away, this is a good test run, and another cake may grace the table at our family gathering. Its that good. Yeah, I used my finger to smudge some of the topping off the plate in that pic. It was totally worth burning both my finger and tongue to get some of that candy coating before it was cooled. Here's how you can get some too: 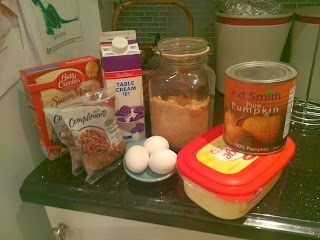 1. - Golden Cake Mix - The Recipe calls for Duncan Hines; I used Betty Crocker. I'm a rebel like that.
2. - Eggs. Three of them. Not more, nor less, but three. Three shall be the number thereof.
3. - One can of Sweet potato Pie Filling Mashed Pumpkin.

You Will also Need Topping ingredients, but they won't be required for about an hour. (After you prepare the rest of dinner!)

Topping - a mere 4 additional ingredients (Plus one I snuck in when no one was looking...)
1. - Four Tbsp Butter. I used margarine because I am a heathen
2. - 1/2 cup of chopped pecans. I am against cruelty to Pecans, so I bought them pre-chopped.
3. - 1 cup brown sugar. I have no clever things to insert here.
4. - 1/4 cup plus one tablespoon heavy cream. It ain't heavy, its my dairy.

The cake is pretty simple, put the cake mix in a bowl, make a well, crack the eggs and dump 'em in there like a load of laundry, then slop the pumpkin on top. 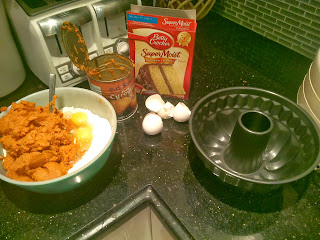 Mmmmm looks De-Lish!! Actually at this stage the pumpkin tastes like baby food squash. I tried it. its not very appealing. Anyways, mix that stuff up for a minute or so. Once its all good to go put it in the Bunt Pan that you just bought this afternoon 'cause you needed it to make this recipe. Of course no stores stock bunt pans, so you had to drive around for an hour after work trying to find a bunt pan the week before thanksgiving when the stores were full of crazed housewives looking for tablewares to impress their mothers in law. Yeah. Good times. 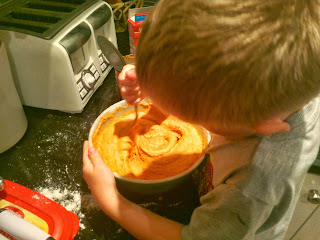 Ok, the recipe says that the bunt pan needs to be greased and floured, but this lovely new pan ($9.99 at Home Outfitters - made in Portugal or Italy or Spain, or some place European and totally unexpected) is non-stick. Dilemma time. I greased it just to be on the safe side, but I don't think it was necessary. 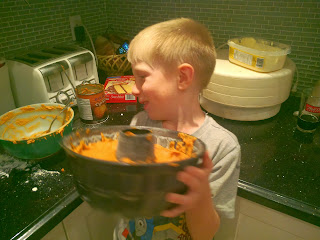 Anyways, put the day-glo orange cake mix into the carbon-black pan and marvel at the wonderful contrast of the colours, then pop it in the oven at 350° for an hour or so. The recipe says 65 minutes - I put it in for an hour and ten minutes. It will be a little gooey when its done - a halfway point between the smeary gooeyness of pumpkin pie and the firm crumbliness of golden cake. Your knife will not come out clean if you do the "stab it to see if it's dead" test. 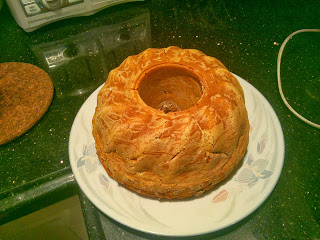 Flip the cake onto a plate and set it aside to cool.

Now lets get going on the topping. I suggest you have all the ingredients close at hand for this stage. You are making pralines, which are a candy, and require some rapid-fire movements of ingredients into the pan. If possible, pre-measure everything into coffee cups on the counter beside you to make it faster and easier to get things into the pan as you go.

Alright, ready? Get the butter (margarine if you have no God) in the pot and start it melting. While it's melting, cue up the pecans and brown sugar. Once all the margarine is melted, dump in the pecans, and fry them for about 2 minutes. This step will increase the nutty flavour of the pecans, but you want to be careful not to burn them by cooking too long.

Mmmmm Pecans. I love Pecans. You know what else I love? Maple Syrup. Wouldn't it be great if there was some Maple Syrup in this recipe? 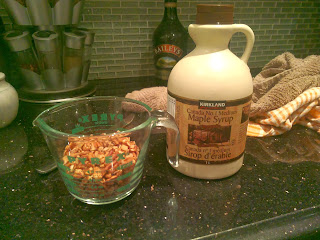 OK there is also Bailey's in that pic. Dunno how it got there. I should have put a little of that in the chef.

So once the pecans have suffered for 2 minutes, add the brown sugar and keep mixing (and a splash of maple syrup too if you are so inclined, I was thinking some bourbon would go nicely in there as well, but I couldn't hazard a trip to the liquor cabinet). Also put in the 1/4 cup plus one tablespoon of cream - which is the weirdest measure of ingredients I have ever seen. Probably 1/3 of a cup of cream is about the same. I dunno. 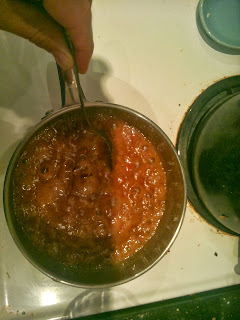 Anyways mix constantly - you don't want this to burn, and soon it will boil like in the picture above. Keep it boiling for 2 minutes, then remove from heat, and set aside to cool. You want it to thicken, but still be drooly. If it's too thin, all your pecans will fall off the cake, if it's too thick, it won't run down the sides of the cake. You can really see the difference between the stuff I put on when it was still too hot and the stuff I waited to put on in the pics below. 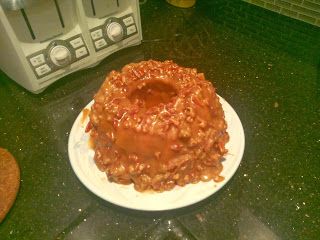 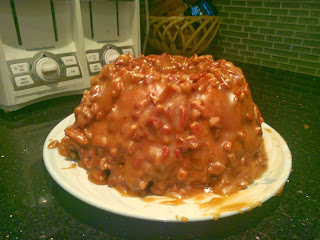 Also, because you have basically made caramel, the goo will be super sticky, so don't try to clean it off the plate - it will only make a mess. A delicious, candy flavoured mess studded with pecans. Who am I kidding, you know you're going to try a little of it! Just try not to burn your tongue.

And there you have it - Sweet Potato Pumpkin Not-Pie, Cake - just in time for thanksgiving! Let it cool before serving, and the candy shell will harden nicely. But let's be honest, you're gonna eat it long before it's cooled.

Posted by littleboatiris at Tuesday, October 08, 2013