OK so this has been the week of thinking about the basement. We spend a lot of time down there so I want to be sure we get it right, but I also know that once we get started it will be a lot of work to implement all these ideas.

The very first priority down there will be the bathroom. If nothing else happens in the basement the bathroom must. So right now that bathroom's space is our junk closet: 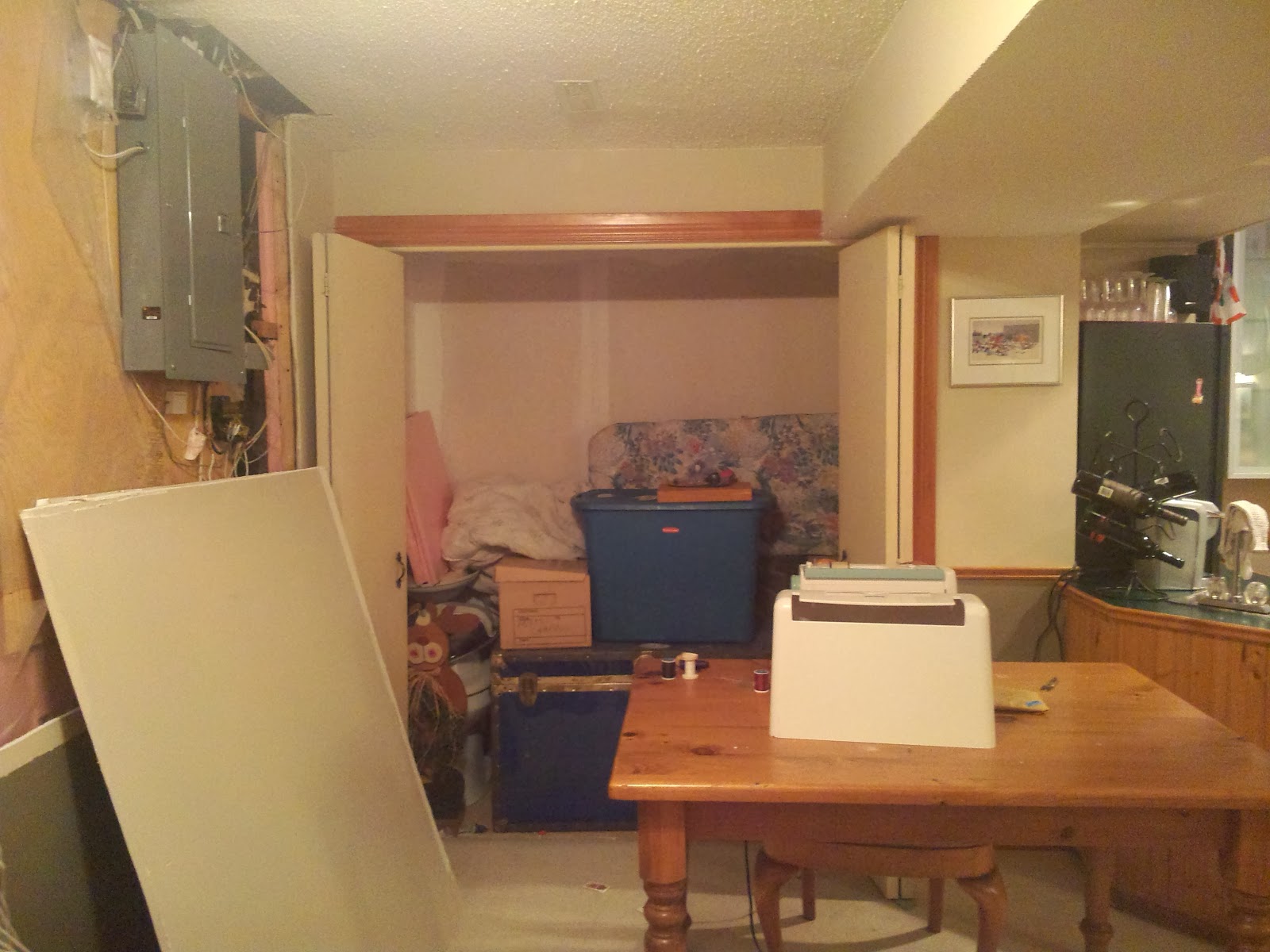 And converting a junk closet into a bathroom is not as simple as you might think. Luckily, there is a water supply to the existing bar, so we have nearby plumbing that we can run to sinks and toilets, etc. The wall bump out next to the bar (behind the minifridge) also has a drain stack and clean out in it, which would indicate that there is a good drain line right next to our future bathroom. Since it is also right next to the power panel, a dedicated GFCI circuit to the bathroom will not be difficult to install.

So far so good. The site is well suited to the use.

Putting in a basement bathroom will require a few steps that are fairly intense.Our ten-step bathroom looks like:
The challenges we have with this space as a bathroom are that the location is pretty inflexible since it is locked in by a foundation abutment on the bar side, and the power panel on the living room side. Basically, we have the space we have, but no more. This means we must build cabinetry since the concrete abutment will get in the way of whatever we could buy to put in there. The vanity will not be a rectangle. That will also mean custom or site-built counter tops.

I started drawing a floorplan for this space in ACAD. My ACAD skills are pretty good for line drawing and whatnot. Then I tried to recreate the space in Sketchup to get a 3D feel for the room. The feel I got is cramped, which is likely about right for a bathroom stuffed into a closet. The nice thing about sketchup is that I was able (after only 1 night of use!) to get a decent 3D drawing of the space. I may post that sketch here but its pretty rudimentary. I'd like to take some time to really learn how to make sketchup sing - it looks like it has some good features. I think I'll still use ACAD for material quantities and 2D work though.

Here is as far as I've gotten with sketchup - bear in mind, one day of experience with the software...

For finishes in the bathroom I am opting for tile over softer surfaces, and I can't really say why. I Hate (with a capital H) tiling. But despite the small size of the room I see marble-grey tiles and white floors. Which goes with nothing that I've envisioned for the rest of the basement. I also see a lot of mirrored surfaces in there. In such a small room, big tiles and loads of light will be critical. Mirrors and bright tiles can accomplish that well. Maybe instead of white floors, I could go with something dark, and tie the floors to the bar area. Hmmm.

Another item that we have gone back and forth on with this bathroom is what the door should look like. We've considered a pocket door since space is very tight, but I think we can do better with an outswing standard door. The reason for this is that a pocket door would result in a weak wall, and being that all the walls here will be tiled, I don't really want any flex behind the tiles. I am sure I could come up with a home-brewed pocket door built into a 2X2 frame that would be as strong as a pre-made setup from Home Depot, but that would be time consuming and expensive. And the last set of pocket doors I bought, I was really disappointed in. So I like the pocket door idea, I just don't like the materials and strength of what's available today.

Another challenge for me is that I keep flipping between a shower stall and a tub. A tub is nice because, well, its a tub. But a shower I can put the dog in and wash her down, and we already have 2 tubs. I don't think we need a third. I think at least 1 walk-in shower would be a good thing. but then a tub could come with jets and be therapeutic or whatever. But a shower I have to put up Kerdi membrane or a tile bed for and then do more tiling. Did I mention I hate tiling? In case I didn't, I Hate tiling. The plunk-n-play of a tub is really appealing.

Another take on marble and mirrors with a shower stall:

I am wondering if we go with a lot of dark wood in the bar/living room area, maybe I can get away with building the vanity out of a similar wood for this bathroom. Then I might be able to incorporate some marble into the bar design to pull the two rooms together into one. I really don't know what all this will look like, but it really doesn't matter at this point because I have so much other stuff to wrap up before I can even get close to starting this. The closet doors for the boys room are still in the basement, 2 years after this post!!

I think I'll try a concrete countertop in the bathroom as my learning grounds before I attempt the bar. If it turns out poorly in here, I can close the door. And a counter in a spare bathroom doesn't need to be fancy, so its a good learning spot. We'll see where that leads us! I really like these slot-drain, step-down designs, but I am sure they are waaaay beyond a first attempt.

As I said in a previous post, I already have a sink and toilet for this space, but they were salvaged from other spots where we've made improvements. I'm not really attached to the sink, but if I can incorporate it into a concrete counter, why not. If it won't work, then its hasta la bye-bye sinky, and I'll work with something else. Casting a sink into the countertop may be a little ambitious for a first go at this stuff, so I'll have to figure out an attachment system.

<EDIT> Apparently we are old-school in our thinking - this article on Houzz shows that nearly everything we are considering appeals to the 55+ demographic.

Posted by littleboatiris at Friday, January 10, 2014