If you read my last post, you may have noted that it ended with reference to trouble in paradise. Luckily our problems are minor and life goes on but still, a french cuss is appropriate here.

Back around Christmas our area was hit with an ice storm. The ice build up was as much as half an inch thick, and we are still cleaning up the effects of the storm. Wires dangle from power poles here and there, and tree limbs are still scattered. The cleanup has been slow because after the ice storm, we got a deep freeze so that whatever fell on the ground has been locked into the ice with no hope of breaking free.

We lost a couple small branches from the tree in front of the house, but beyond that we really weren't affected by the storm. Until Saturday evening.

On Friday the deep freeze finally broke up enough for the ice to start melting. The radio was cackling out warnings about flooded creeks and avoiding ponds and rivers, and we went merrily on with life, completing projects around the house.

On Saturday, it was downright balmy at 6°C and overcast with light rain. I used the good weather to install the 20 amp circuit in the garage and putter about out there. 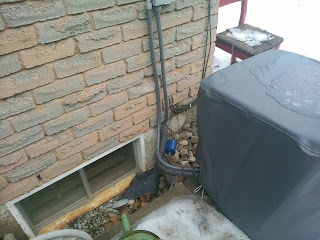 In January, you don't give much thought to your air conditioner. Its sitting in the back yard under a cover, and won't do much of anything until sometime in May when the cover comes off, and then in July we may turn it on.

Our AC unit was replaced last summer, concurrent with the pool renos. The installer drilled a 2" diameter chase through the foundation wall and fed the pipes and wires into the utility room down there. He sealed the hole by plugging it with silicon. Somehow the rain and meltwater found a way to get in through that core drill. 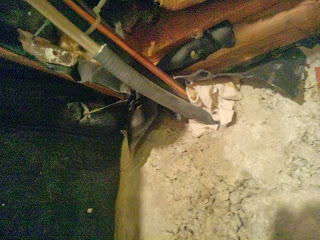 When we noticed the growing puddle on the basement floor, I tore away drywall and insulation to discover the source of the water. I don't really like the way that room was dry-walled, so the tear-out wasn't much of a heartbreak. Soggy insulation is no fun though. Also the carpet scraps on the floor down there may be junk. Alas.

For a quick stop to the water, I plugged the hole with rags, and then we set mopping up as much of the mess as possible. Then I sat down to watch the Habs win the hockey game while I gave the situation some thought. 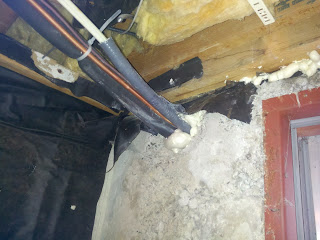 On Sunday, after the rain had stopped and things had had a chance to dry out a little, I bombed the hole with spray foam. I know it's not a waterproofing compound, but for the time being it will hold things at bay. No new water has come in. In the spring, I think I'll be removing the silicon plug that the installer put in, and making a sheetmetal cover that I can seal to the house. 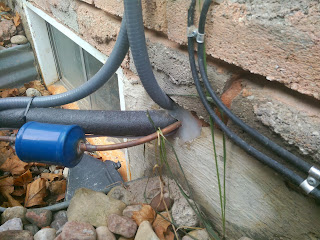 In the meantime, this it the mess I have to clean up... So much for getting ahead on stuff! 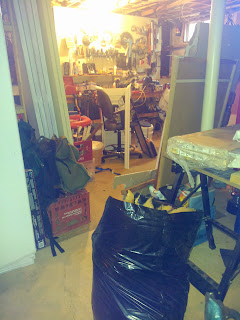 Posted by littleboatiris at Monday, January 13, 2014