This little guy has done me a lot of good over the past 5 or so years, and for a $100 camera from WalMart, I really can't complain. The trouble is that it just doesn't have the picture taking quality to make the images on here (and other places) show their true quality.

So after hunting on eBay and craigslist and online places I decided that it was time for an upgrade. Here is the old Fuji Finepix with floating wristband. Its bounced and sunk and splashed and really I can't complain. trouble is that a point and shoot can't give me things like depth of field and changeable lenses, and doesn't allow me to play with light and effects the same way my old SLRs did.


So after some research and thinking and rethinking I found myself lost in the brave new world of DSLR cameras. My immediate reaction was OMG! Who pays that much for a camera! My second reaction was, these things go obsolete every other Wednesday! No way you can keep up!

Then I realized a few things...


Armed with these thoughts (justification may be a better word) I started looking harder. I settled on a basic Nikon D3100. This is a change from my previous SLRs (I was in love with my Canon T70 back in the day) but it felt good in my hand, and I was comfortable with it.

The D3100 is on clearance (obsolete) at Walmart and Staples for $400, but since it's at the end of it's 2 year shelf life, a lot of cameras are also available used through local shops. To be honest, the used packages aren't much of a savings over the new price. Then I saw an ad on Kijiji for a used Nikon D5100 with spare battery and bag for $350. This was a model higher than I was considering for a price lower than I was considering. I called the girl up and got history on the camera. She had bought it at Costco as a package to use in starting a portrait studio. Now that she was on her feet she was selling in order to get a bigger camera package.

I snagged the deal.

The D5100 is picky about memory cards, so it took us a while to find one it will talk to. I ended up stealing the memory card out of our phone security thinggy. Pictures are more fun than security systems anyways.

Then I got Bernie to pose for a handful of comparison shots to see which camera does a better job. In order to keep things fair, I set both cameras to 'Auto Mode' and gave the old camera the advantage by setting it to take 2 pics of each shot - one with, and one without flash. The Nikon I just told to use its own judgement, and it chose to use a flash on every shot. Both Cameras were mounted in the tripod, but Bernie chose to move between setups, so the poses aren't exactly the same.

Here is Bernie on the old camera:

The Fuji's flash colour is very cool. It turns things blue, and that has always been an issue, especially when I am trying to get the colour or grain of wood in the garage (dark, flash really necessary) and you can see that in the pics above - the flash turns the carpet and walls grey when they really a beigy-orange colour. 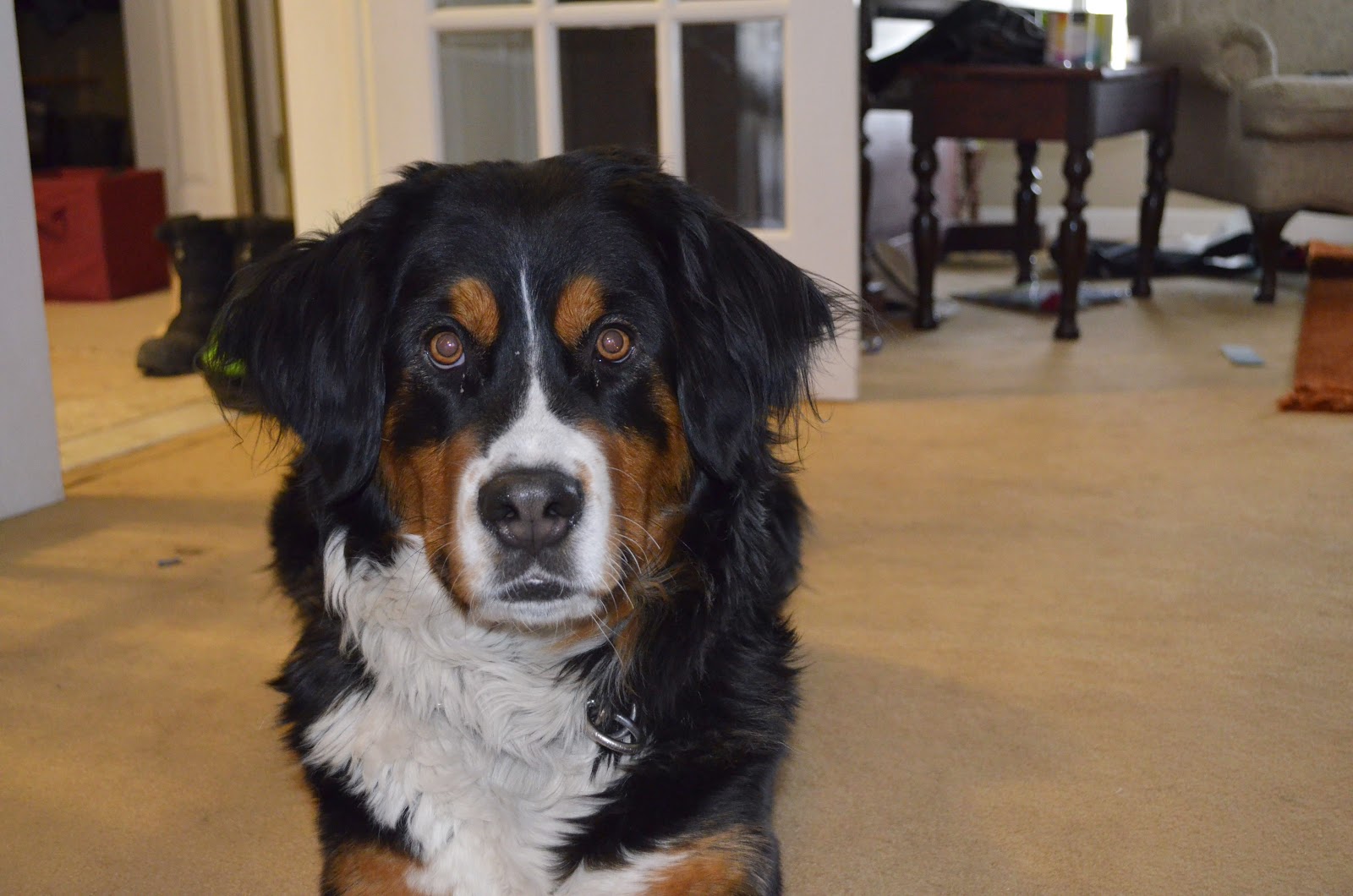 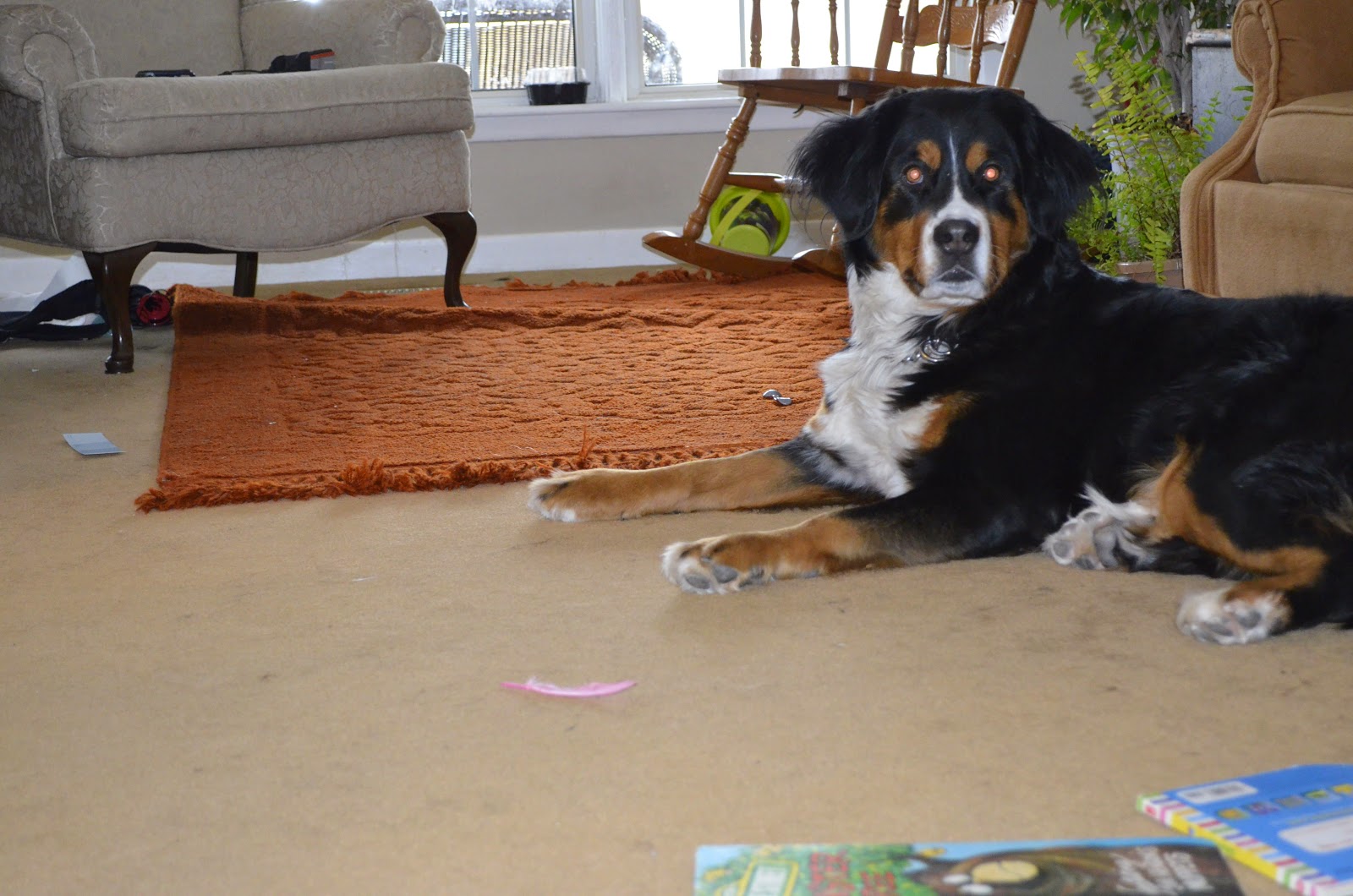 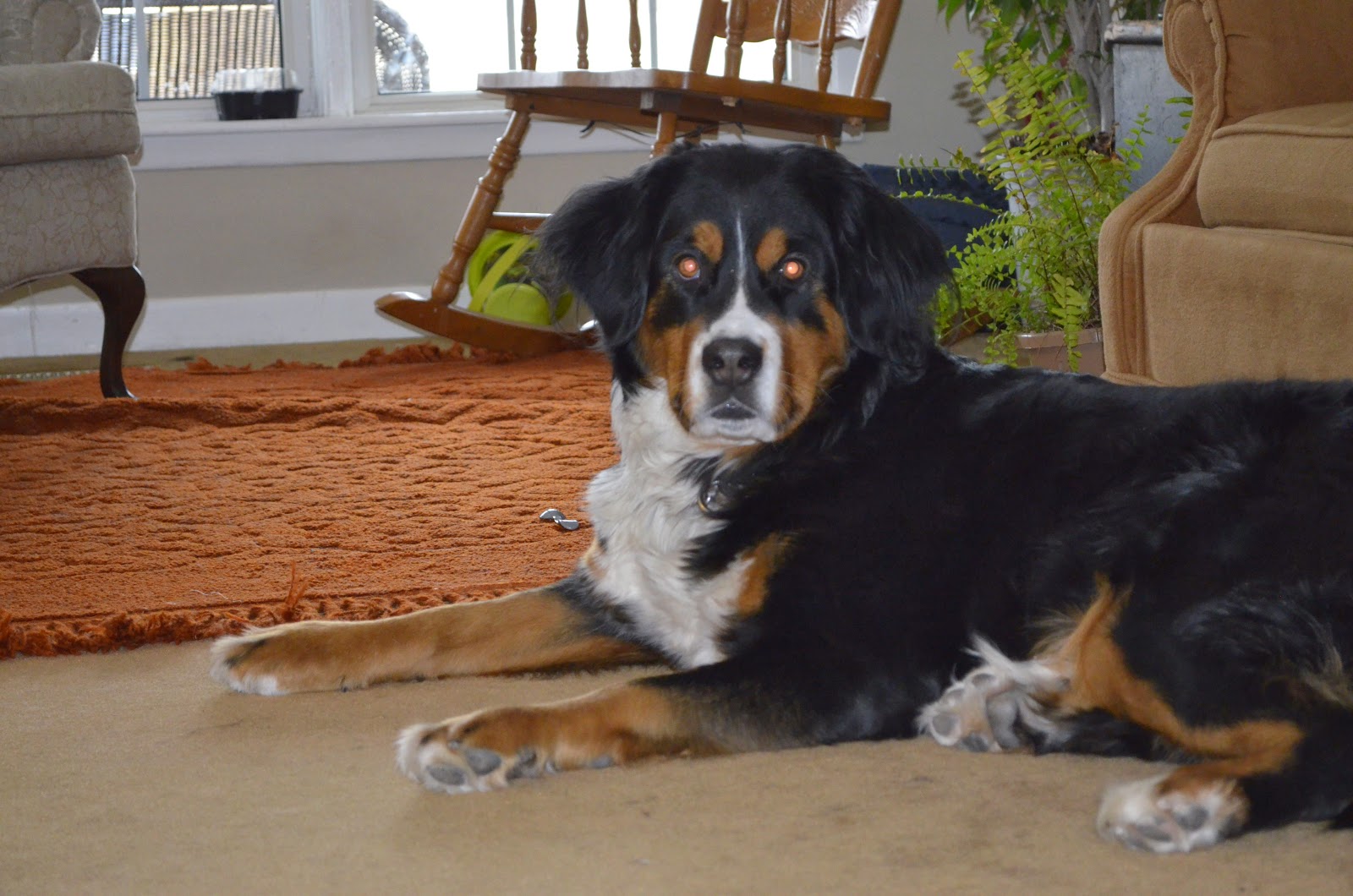 All of those are with flash, but no post-processing. The colours are far true-er, we get some depth of field, and the focus is worlds better. The biggest challenge is that the Nikon's flash and shutter noise spook bernie, so she runs around, and then you have to be real quick to catch a second shot. She stayed still between the last two pics here though, so that's good.

A local camera shop has a course on this camera, so I've hinted to Momma that it might make a fantastic birthday gift. We'll have to see if she agrees.

Now that I have a good camera and a decent tripod, what do you think are the next steps to better pics?
Posted by littleboatiris at Saturday, March 15, 2014