A Weekend at Letchworth - Part 1 of 2 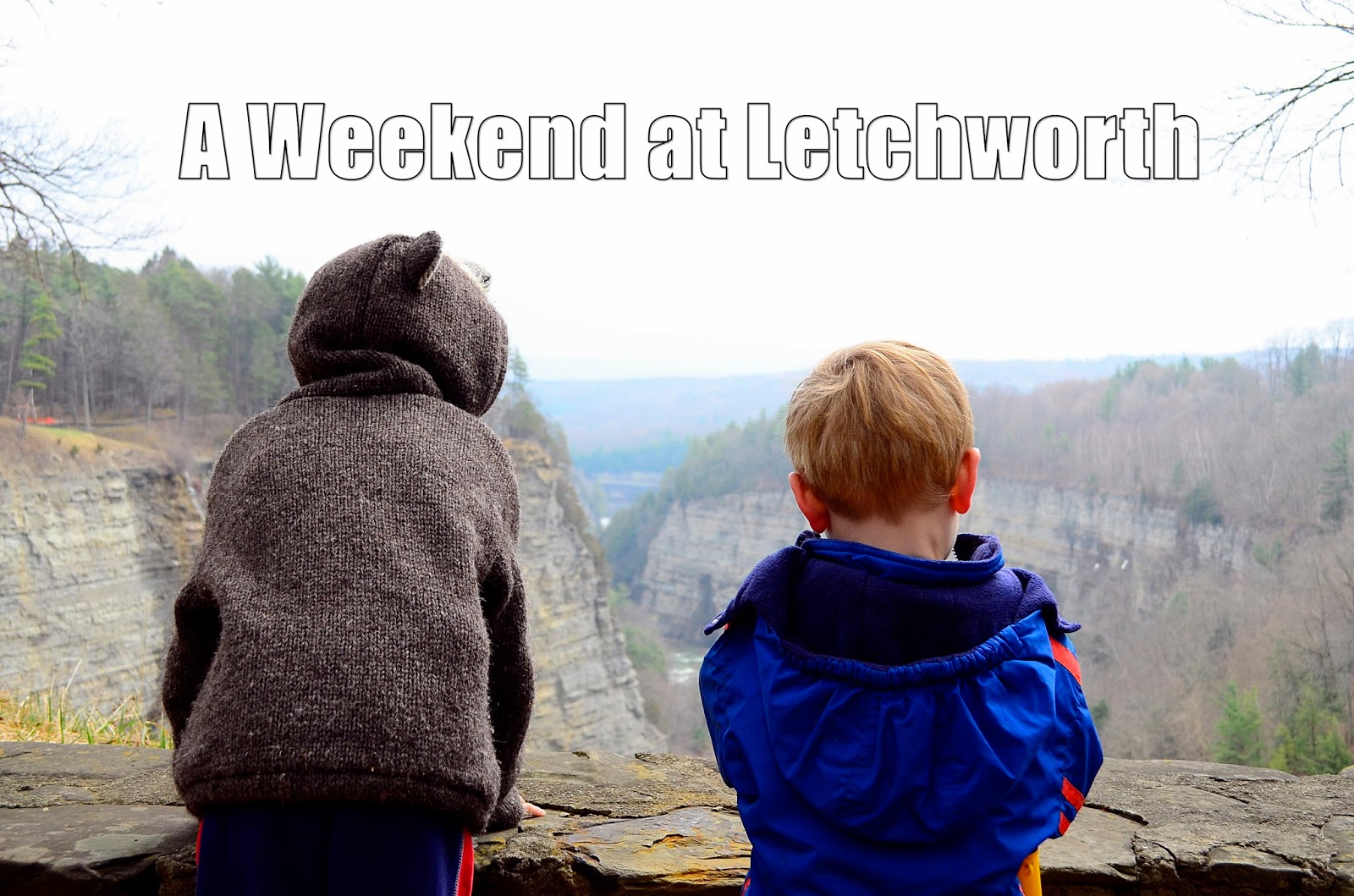 Letchworth State in upstate New York is a bit of a hidden gem. We had never heard of it until I started researching places that were "weather proof" for an April getaway. Apparently it is a haven for rock-hounding, ballooning, romantic weekends, antique hunting, rafting, and camping, and its no farther from home for us than Algonquin Park where we go quite regularly. According to Google Maps, Letchworth is 3-1/2 hours from the east side of Toronto. Travelling with our family it took 5 hours, including pee breaks and dinner at Denny's. 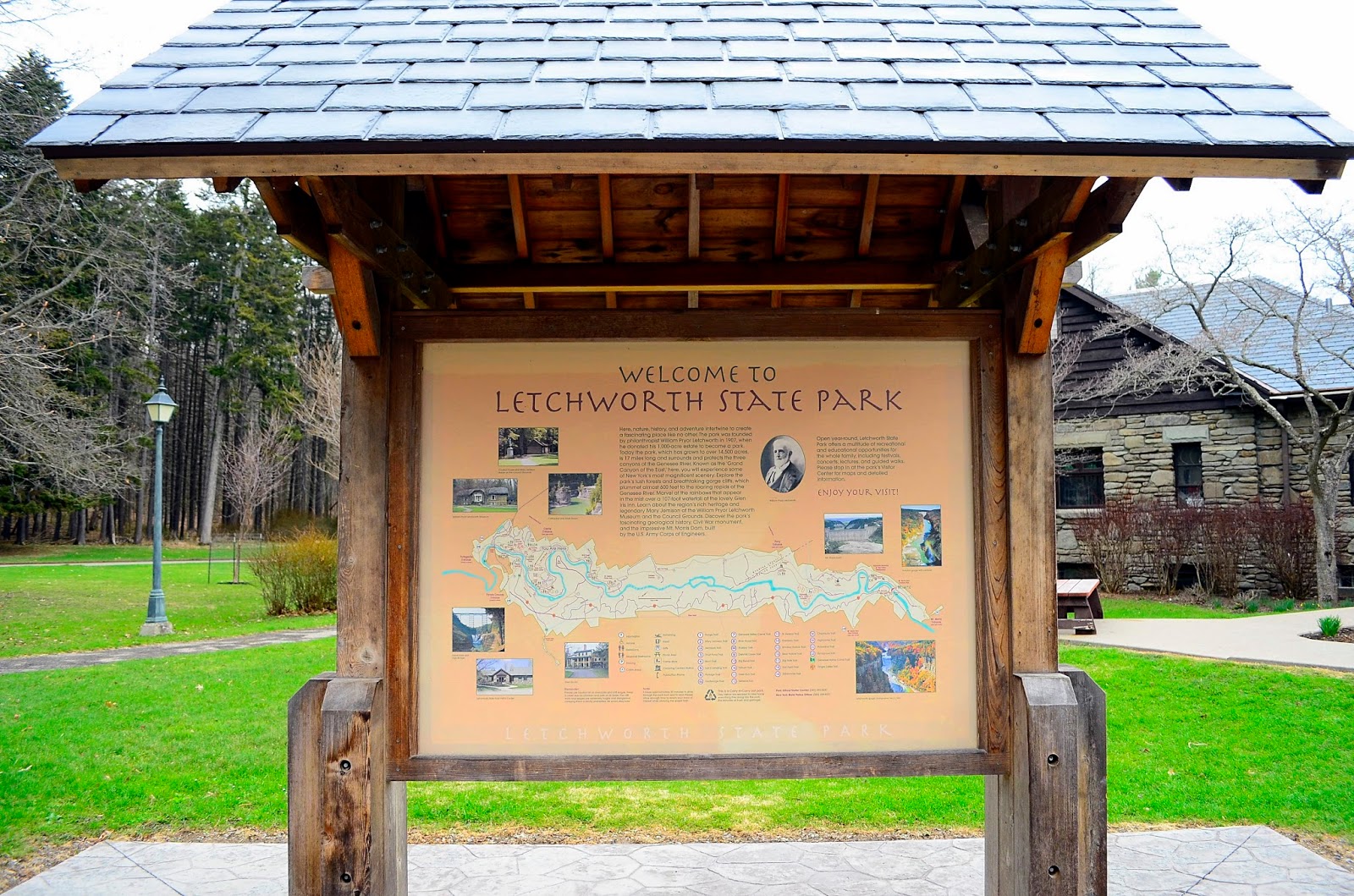 We arrived at Letchworth Park in a light, cold rain at about 9:30 PM with two sleeping boys on a Friday night. It was very dark. The neighbour's cabin had the door open and music playing, but they obeyed the 10:00 PM park curfew, and the boys never woke up. I had called before leaving home to let the rangers know we would be arriving late, and they unlocked the cabin for us, turned on the heat, and left the key on the table. When we arrived, everything was warm and snug, waiting for us.

Somehow we managed to plan this trip for the rainiest weekend in April, but at least it didn't snow (there's a consolation!!) and the weather only mattered in the evening when the boys got a little bored and cranky. But most of the time, everyone was happy to be on a weekend vacation. We woke up on Saturday morning, made instant Oatmeal, and started the day... 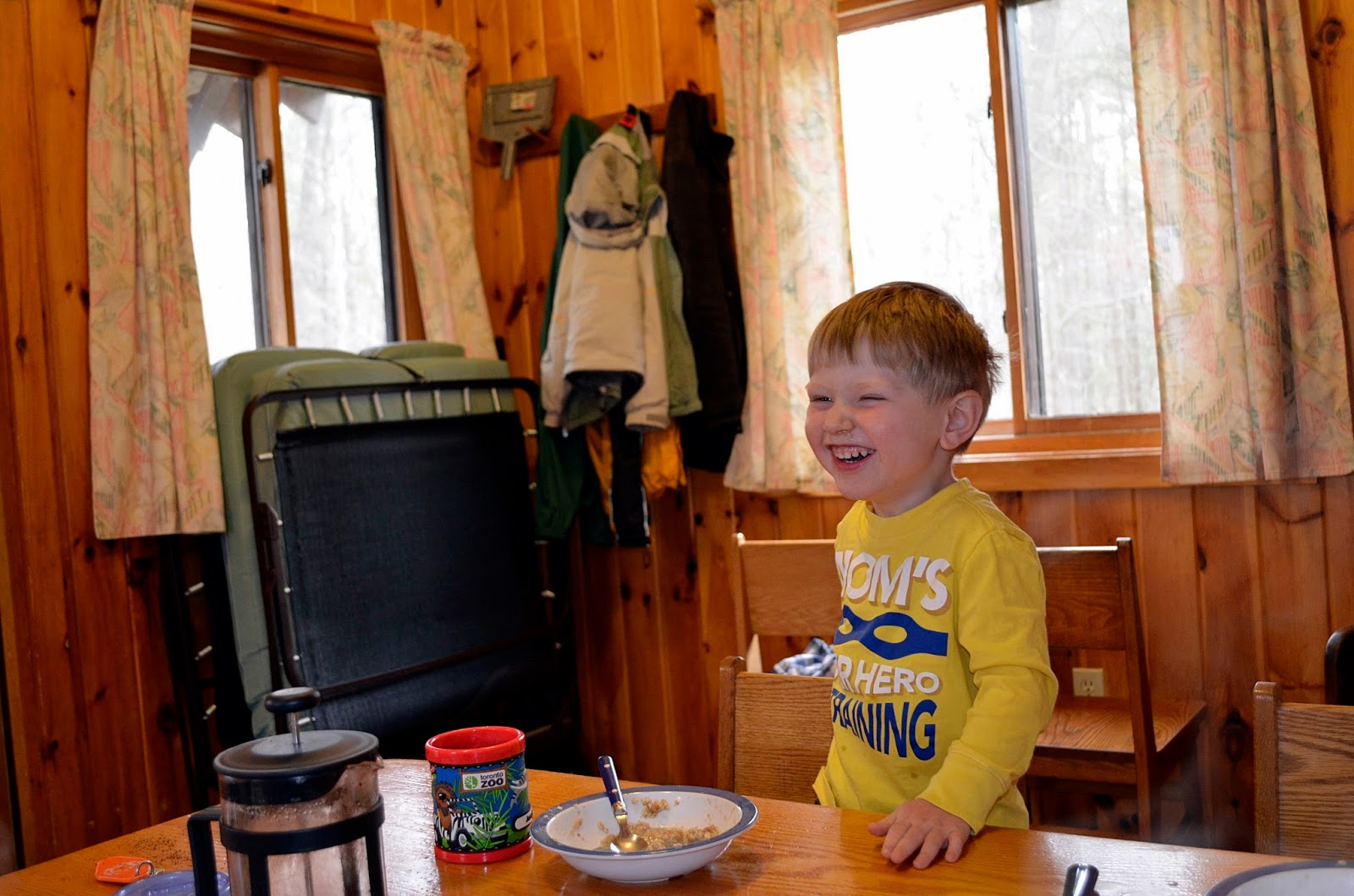 Our first order of business was to get checked in, so we drove from our cabins down to the park visitor's centre. There they told us we had to check in at the campers office, but it was closed. They would arrange to have someone there for us at 1:00 if we could make it by then. We said we would, and got a free map, and some suggestions on trails worth hiking and sights worth seeing. 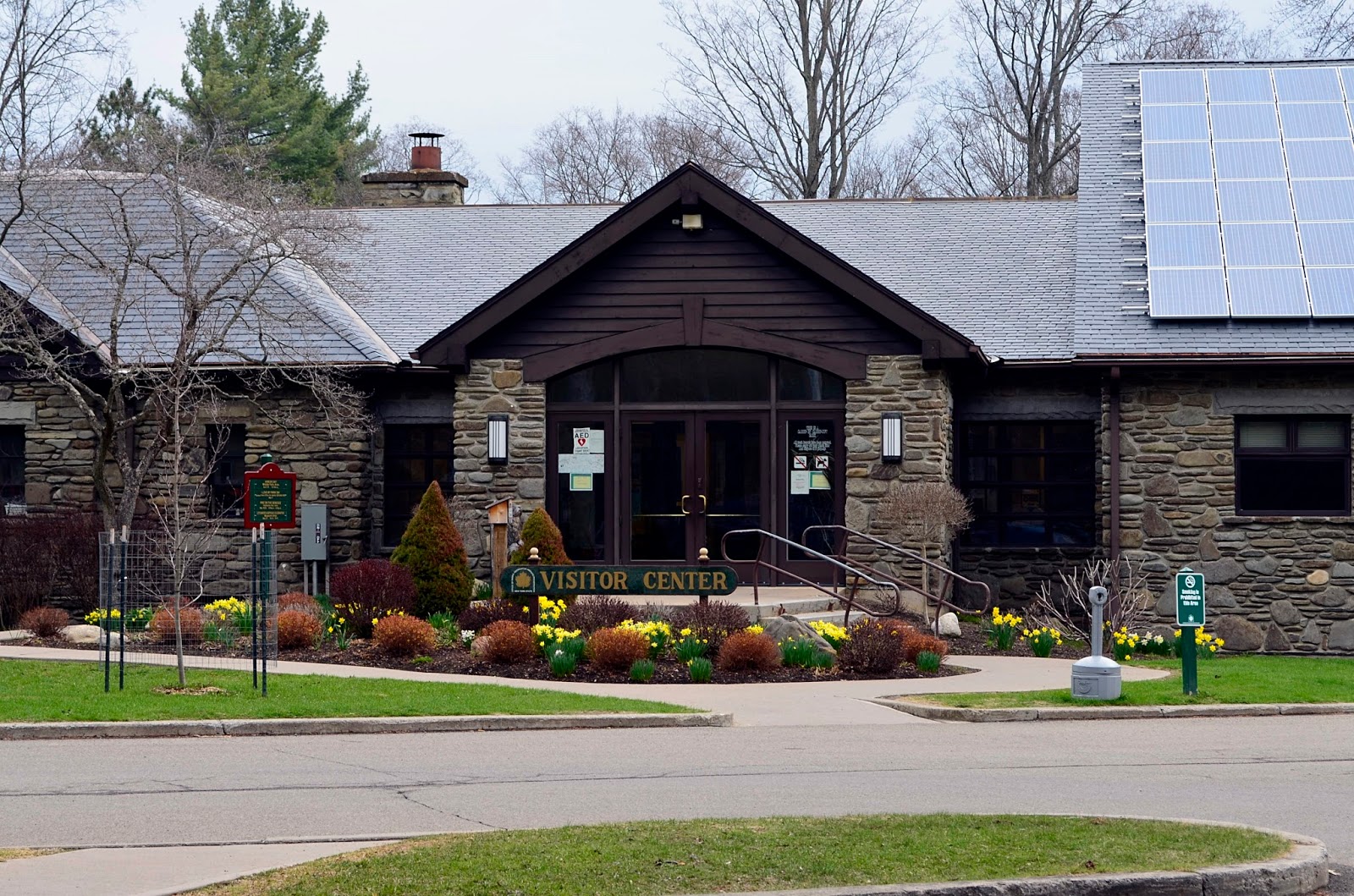 The ladies suggested some walks, but warned that there were many steps, and the old limestone was often slick and uneven. It would be very tiring. We shrugged it off since we have hiked with boys before and went on our merry way. Soon we saw what they meant. Our first destination, a short drive away was the combined hike up to High Falls, then an about face and retracing our steps down to Middle Falls. After Middle Falls we could continue walking along the gorge to Lower falls, or head back to the car and drive the Lower Falls. Of course we wouldn't drive - we had hiked 5 and 7 km trails in Algonquin with the boys, this stuff would be a cakewalk! 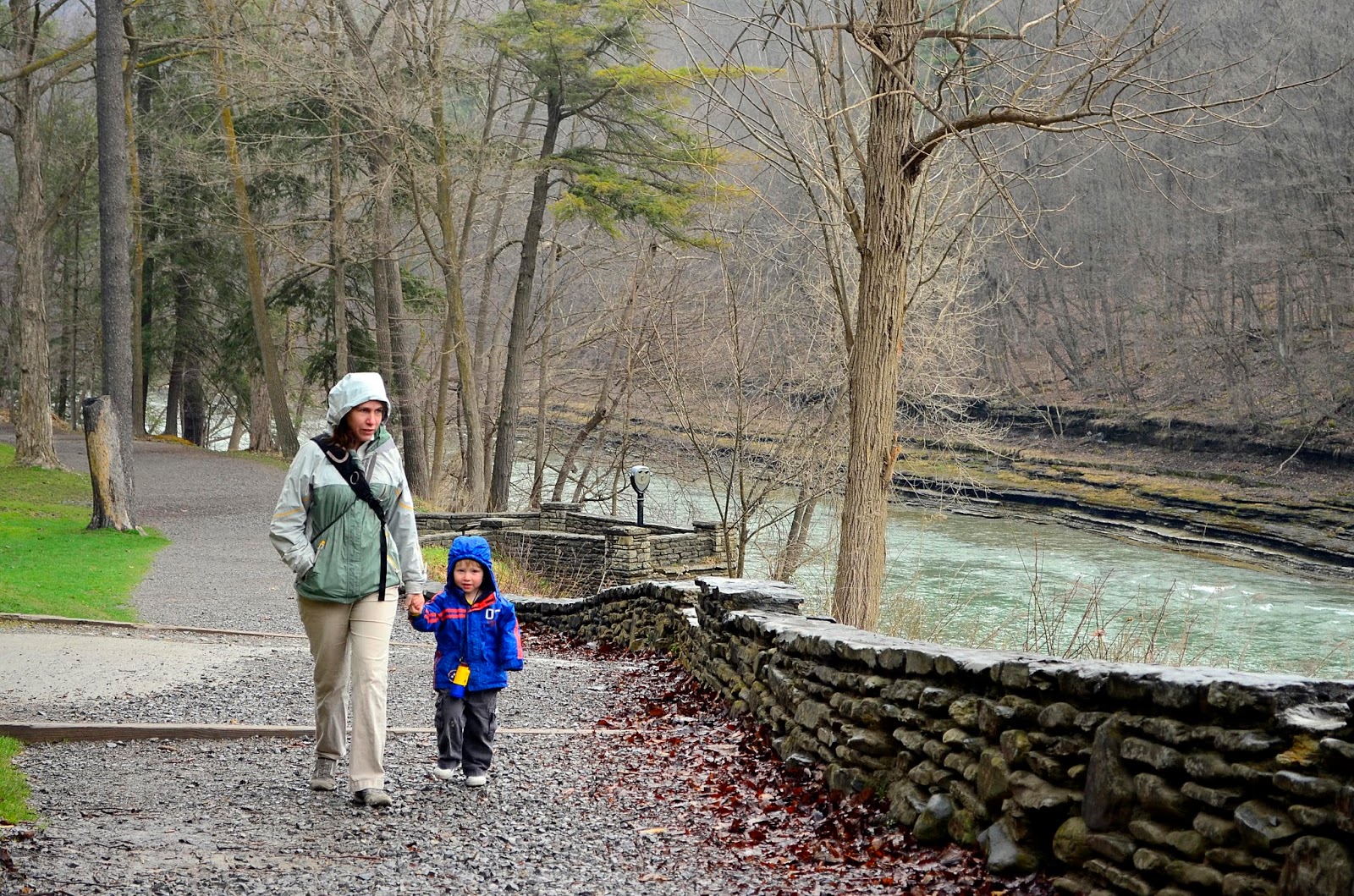 We reached the base of High Falls, and they were beautiful. A railway bridge travels way up over High falls. It was once a wooden railway bridge here, but the bridge burnt down, and this steel one replaced it. I imagine the wooden bridge would have been much nicer. 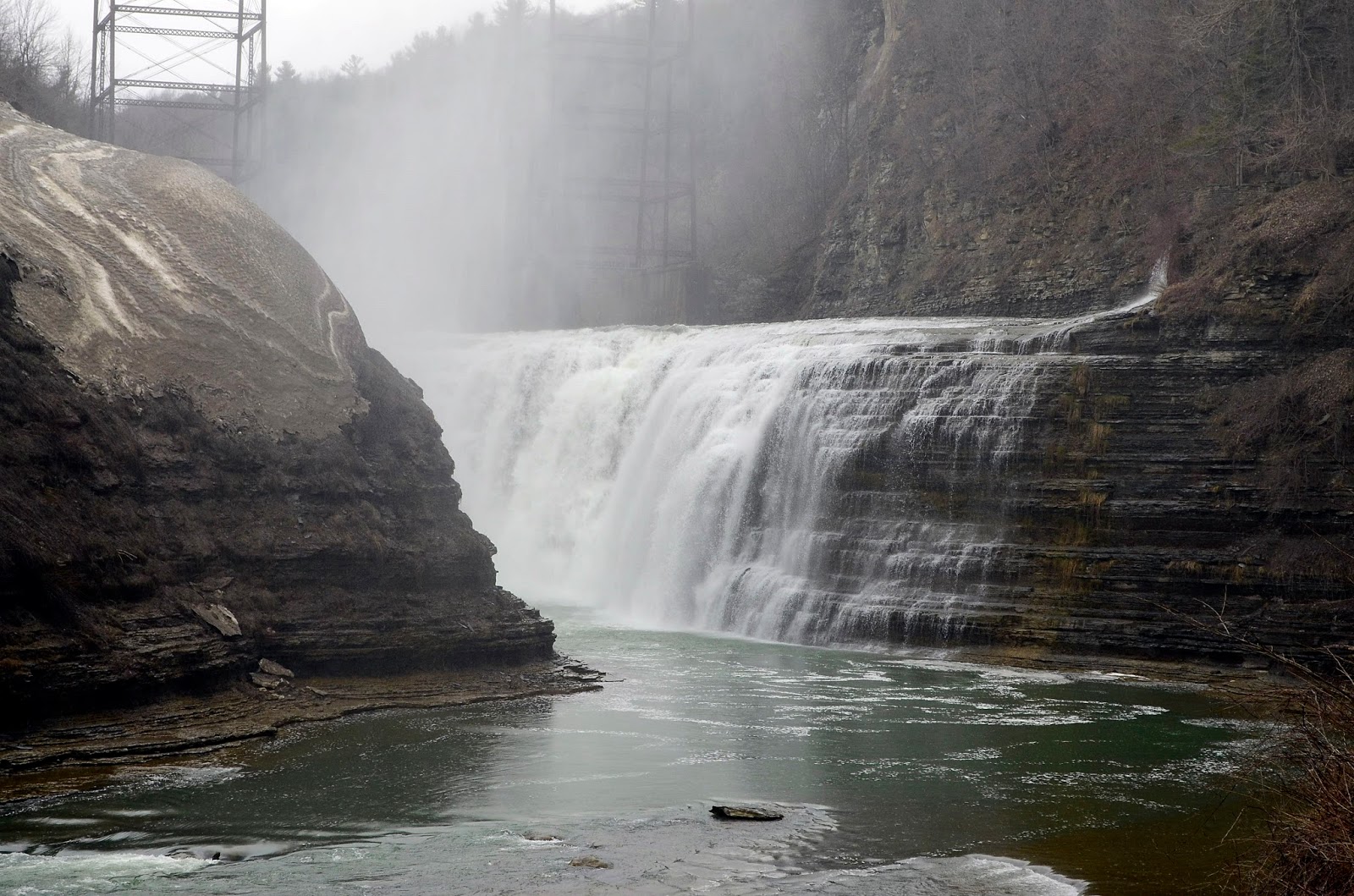 A beautiful stone walkway with stone steps winds itself up the cliff face along the falls here, and very soon we found ourselves ascending the steps and winding our way to the top of the falls, looking for better views.

Also, Buddy stood still long enough for me to get a decent picture of him. This is a rarity. I'll call it our Letchworth miracle. 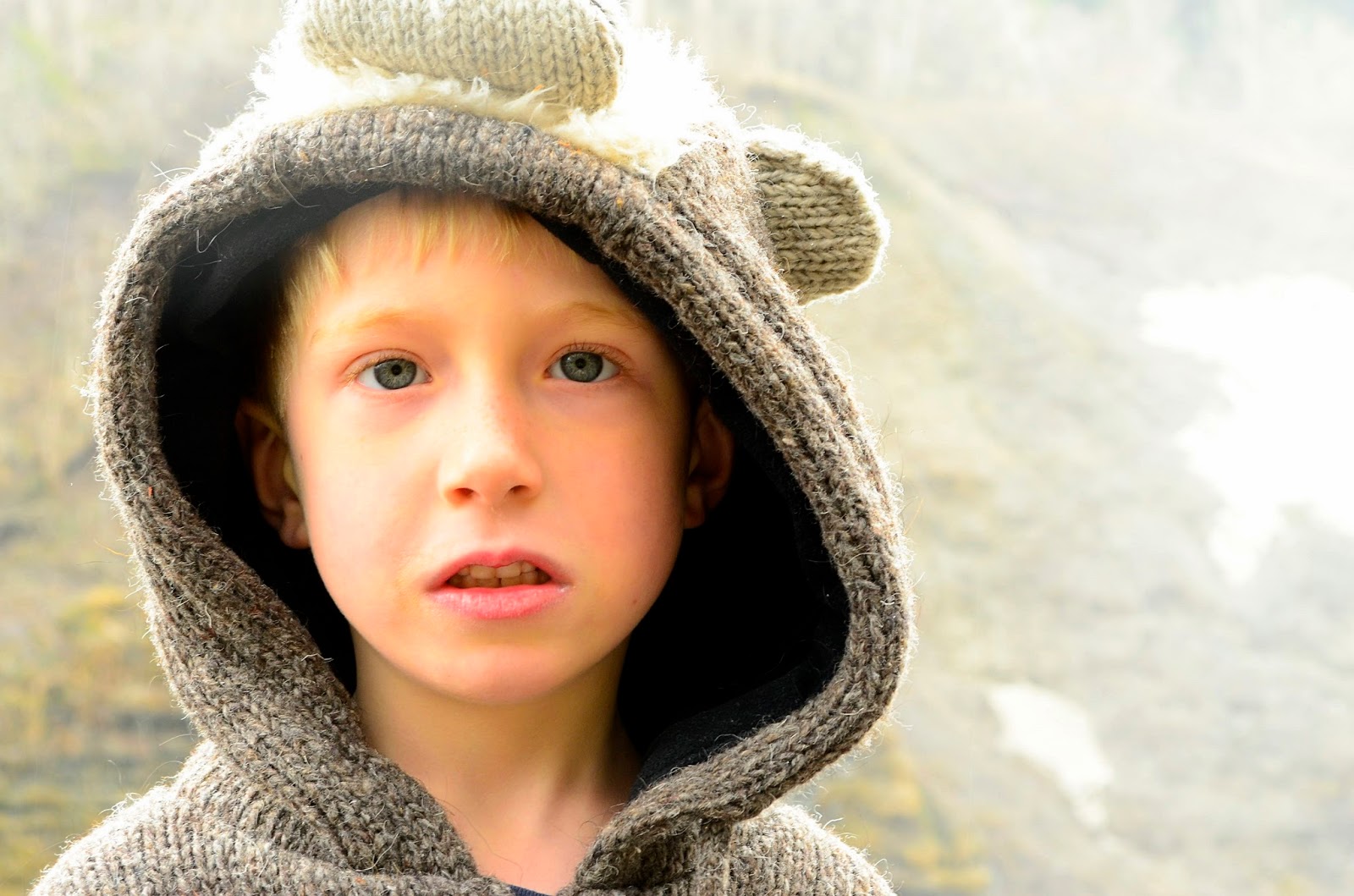 About 1/3 of the way up the stone steps a little footbridge crosses a wee stream. It was very picturesque, so I played photographer and took about a billion underexposed, over exposed, and badly framed pictures. These three turned out really well... I can't decide whether I prefer the rocks in the foreground, being able to see the path around bridge, or the effect of the cascade best. Which is your favourite? 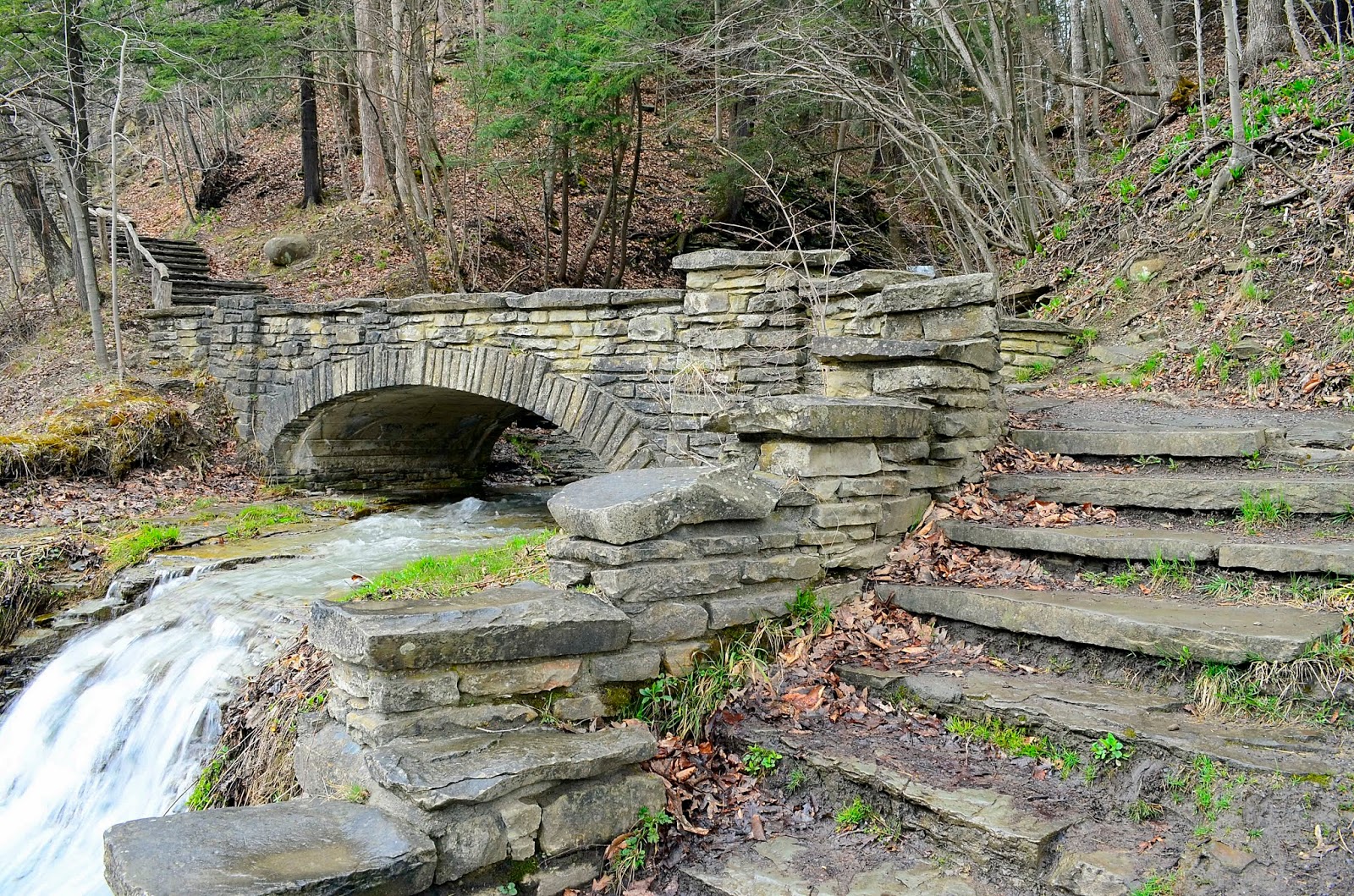 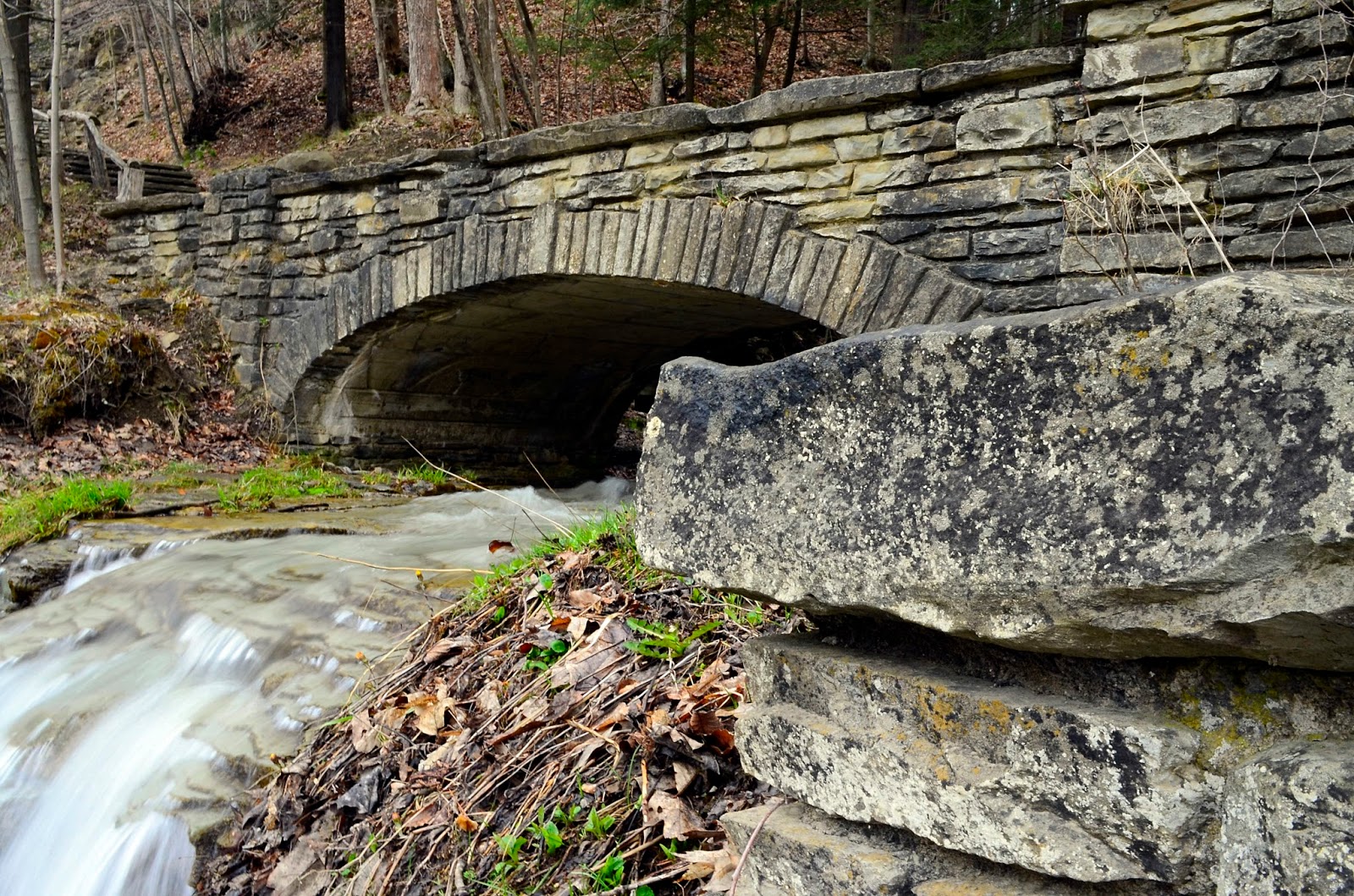 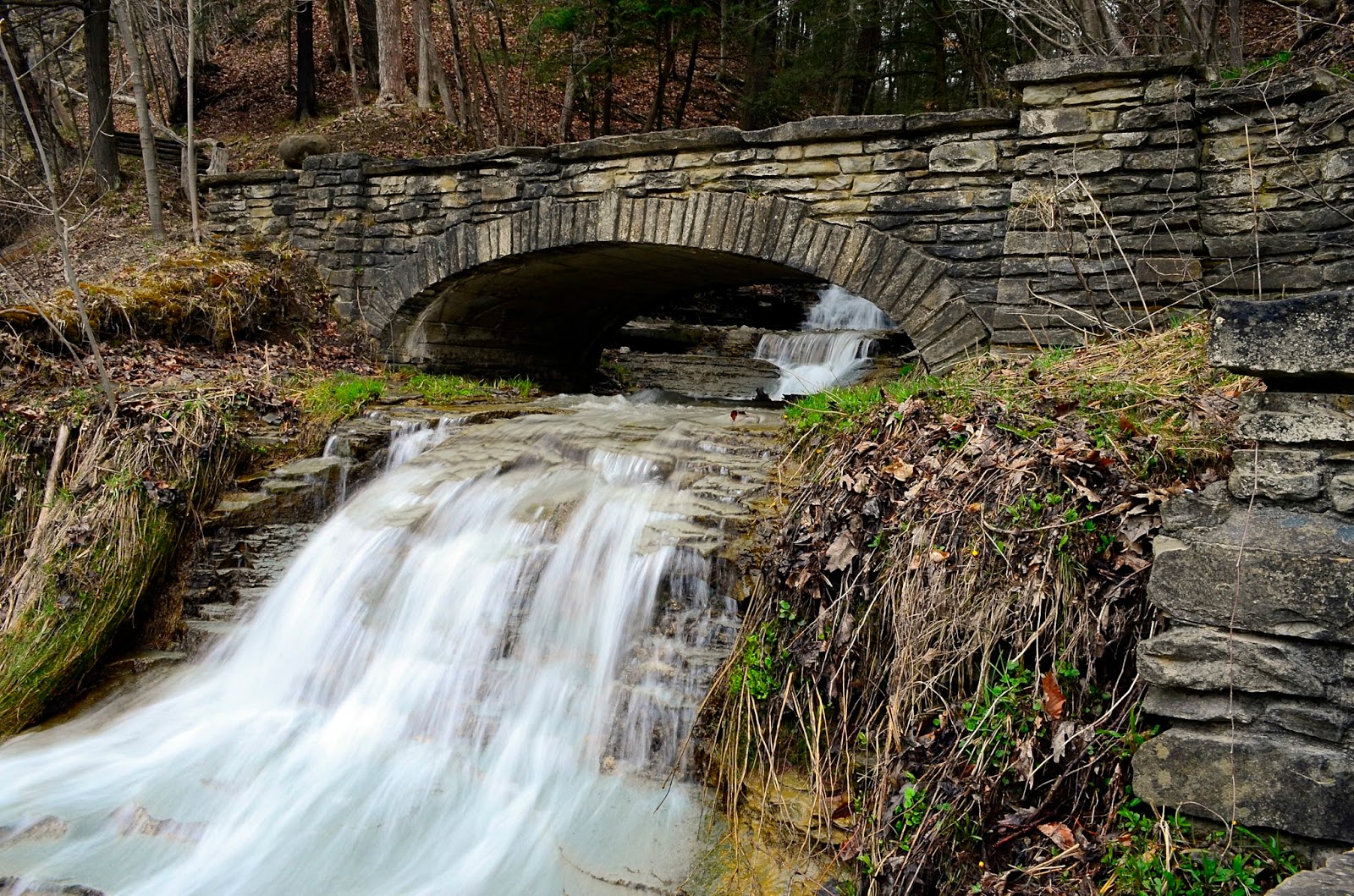 From the top the view was lovely, but damp. In an absolutely unprecedented event, Buddy stood still long enough for a SECOND photo. Letchworth truly is a magical place. 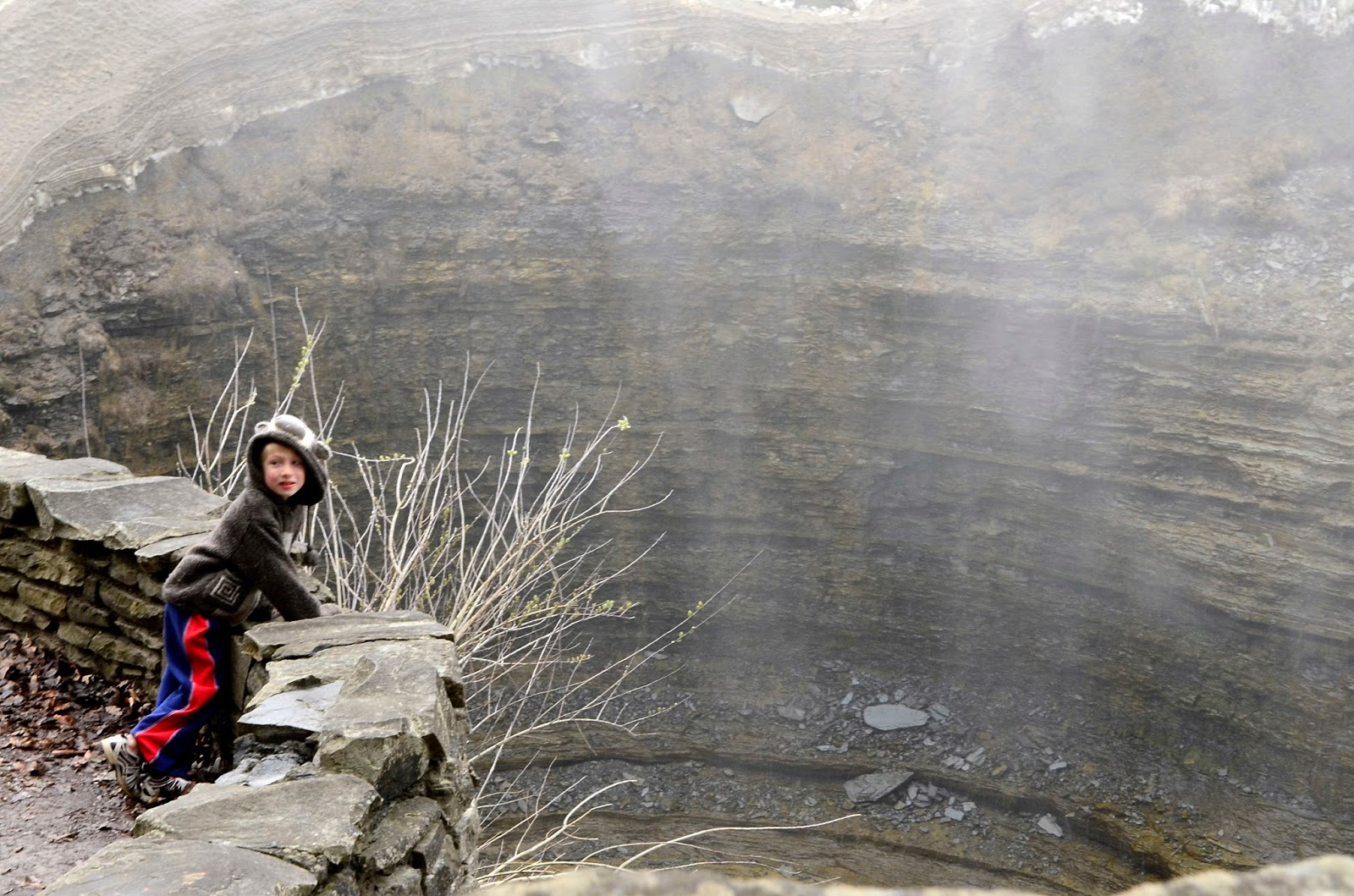 Everywhere you go in this park, there are miles and miles of stone walls, walkways, bridges, and so on. As we walked, one opportunity after next came up for great photos. Of course we were there in shoulder season without the crowds, but one things green out and the flowers begin to bloom, I imagine this place must be bursting with beauty. I thought this viewing platform looked like something that came from a fairy tale. Momma thought it was a good spot for a family photo. 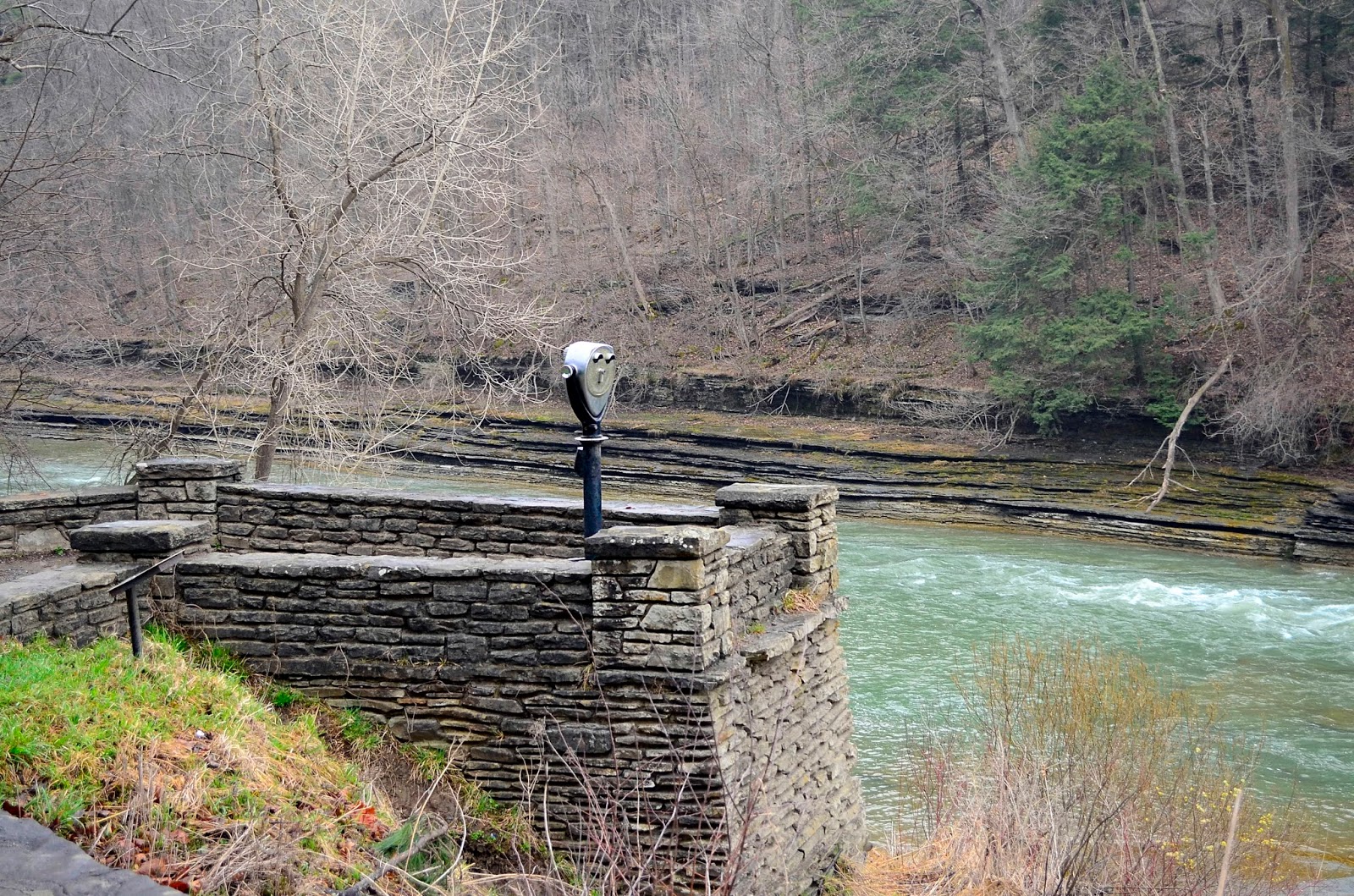 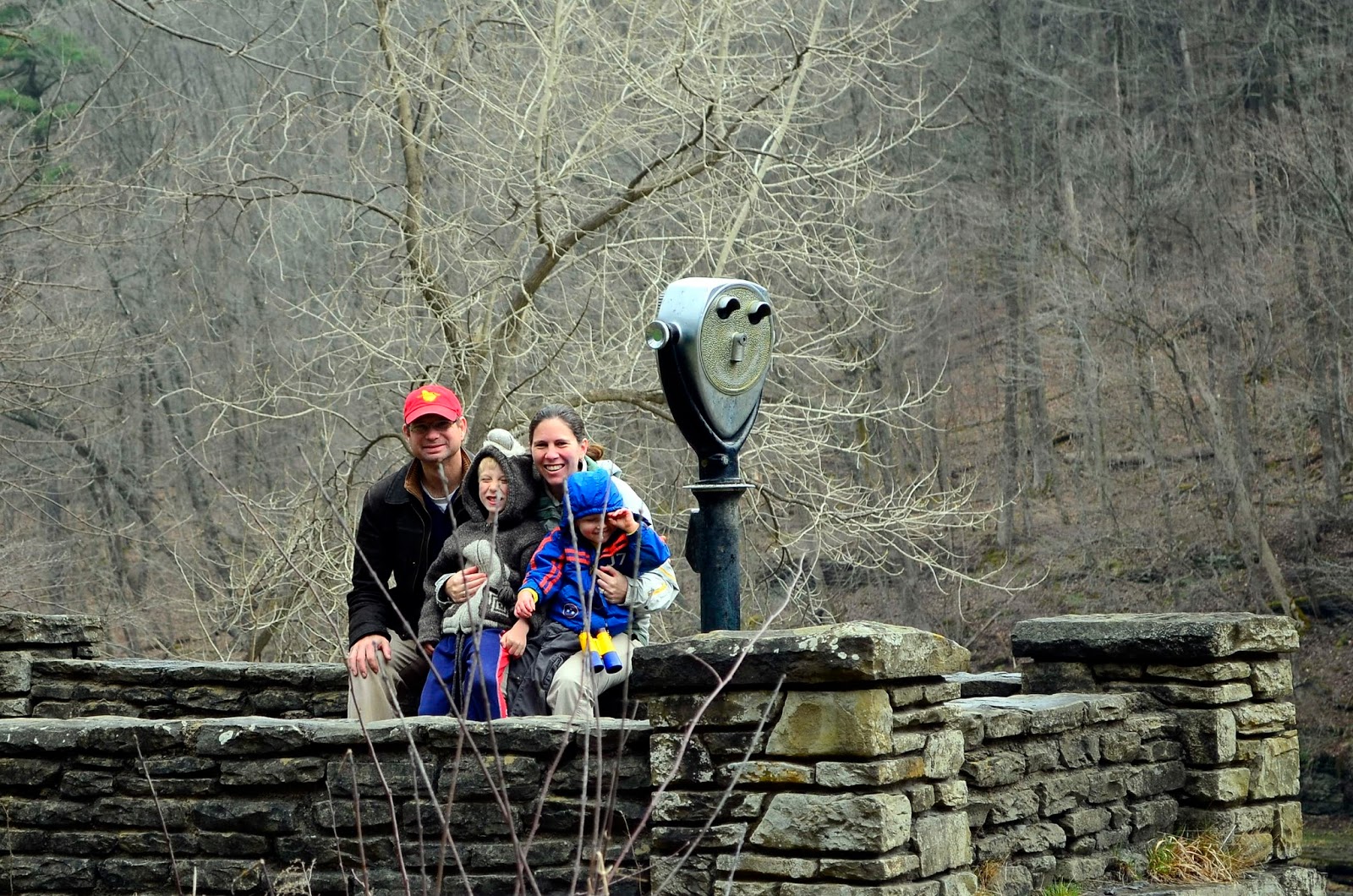 Apparently even the Letchworth miracles can't fix our family poses. Between high falls and middle falls, Buddy got a rock in his shoe. Also this is a THIRD photo of Buddy sitting still! If you haven't already checked, go see how the planets are aligned!! 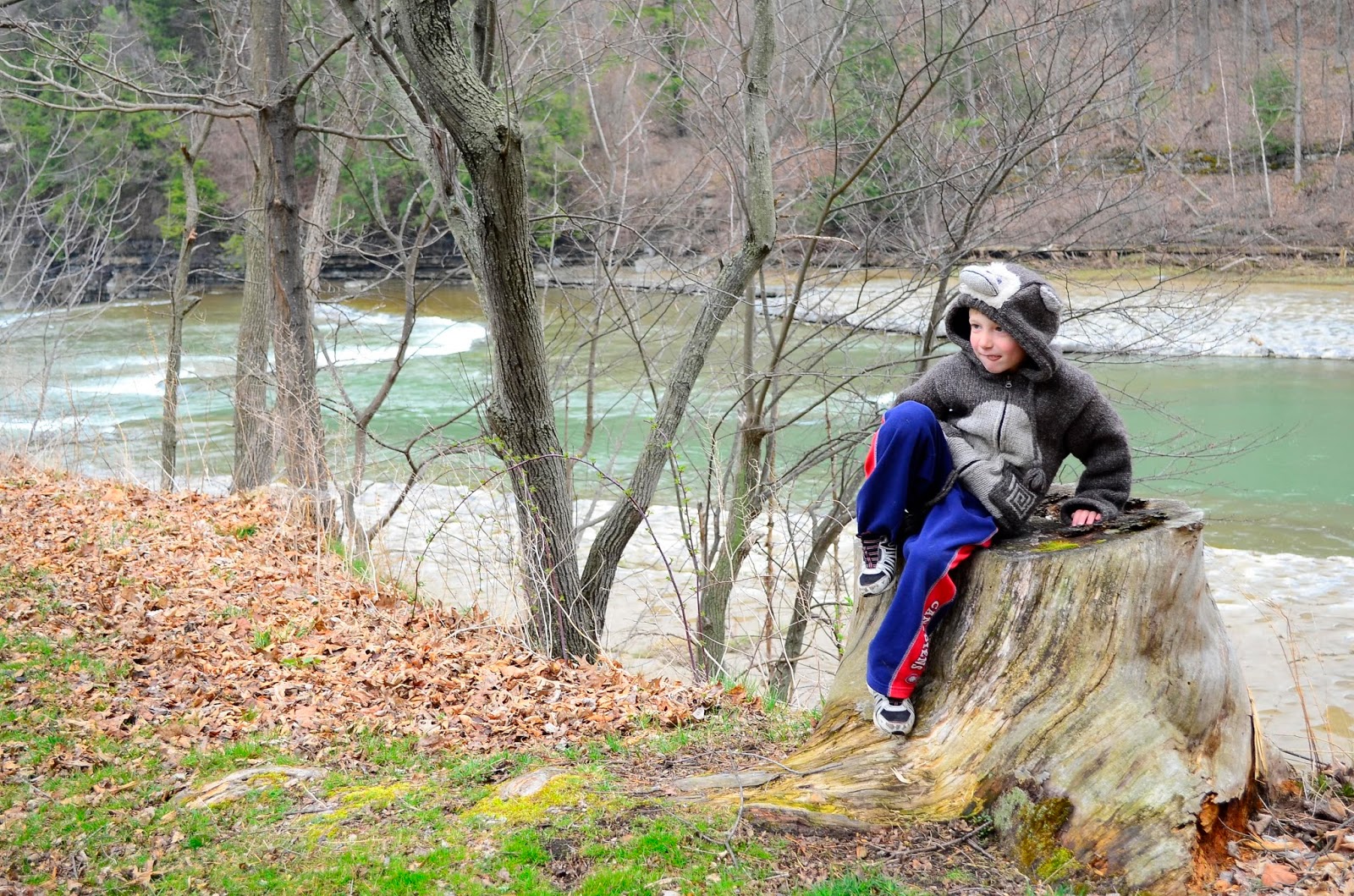 I love the tongue sticking out - and that he's got his shoes on the wrong feet. I am an evil parent. By the way, Buddy is VERY proud of those Montreal Canadiens track pants.

Below is Middle Falls. Middle falls is a sheet cascade - like a miniature Niagara Falls, but its tricky to photograph because the falls are so close to the path. In fact the path and lookout were wet and muddy from all the mist off the falls. The falls has eaten out a chunk of the valley wall on the north side of the gorge here and you actually feel like you will be sucked down into the canyon by the water. A better photographer might be able to capture that feeling, but I couldn't get it right. 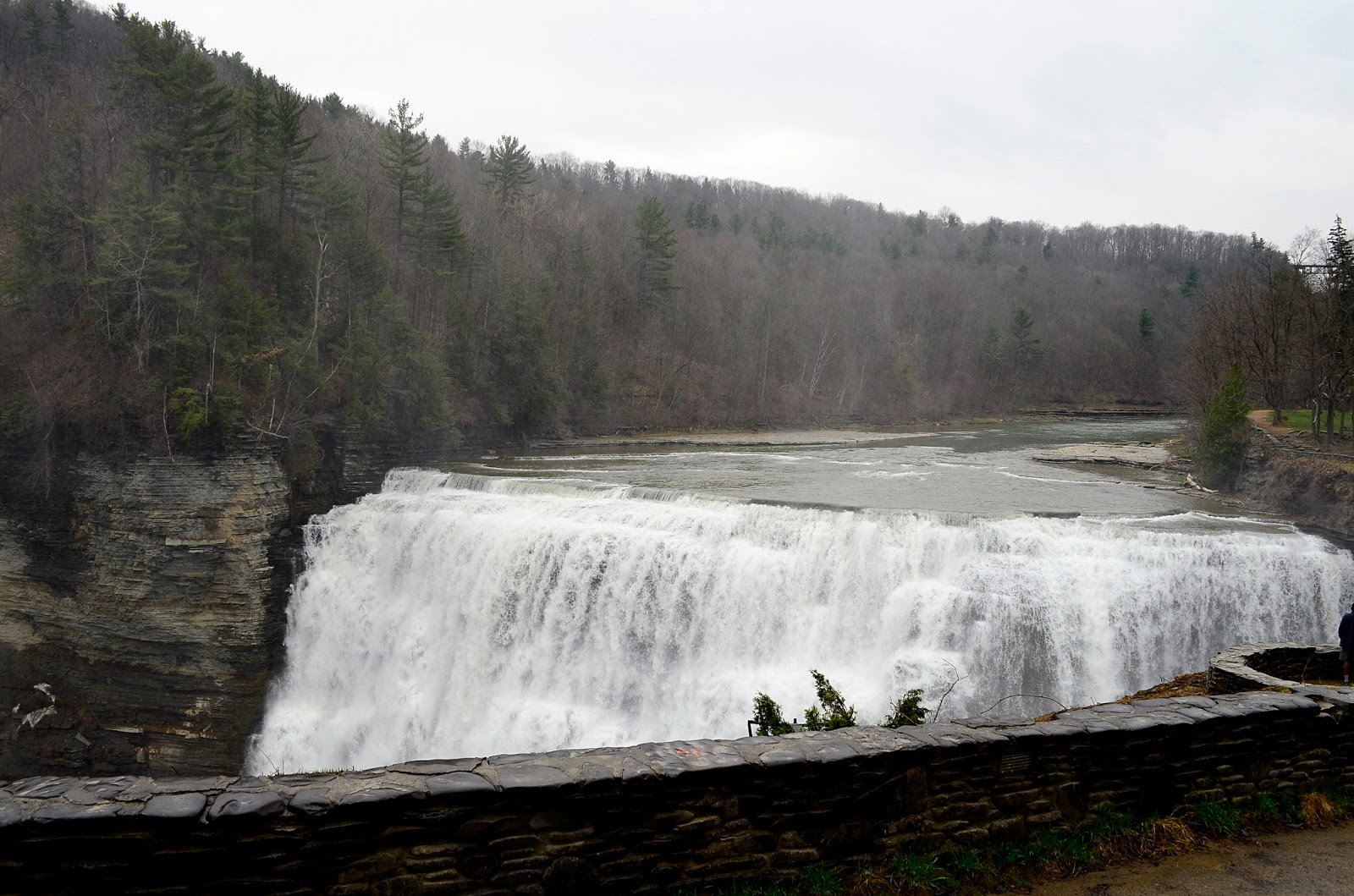 Just past the falls, there is a Narnia lamp post. We kept a lookout for Mr. Tumnus. He was no-place to be seen. Everywhere in the park, there were the low stone walls. And I mean everywhere! They didn't really offer much protection from folks going over and into the canyon, but they did set a boundary for the boys, which was a good thing. In my mind all I could think of was the amount of work it must have been to cart it all up from the riverbed, and then lay all that stone. 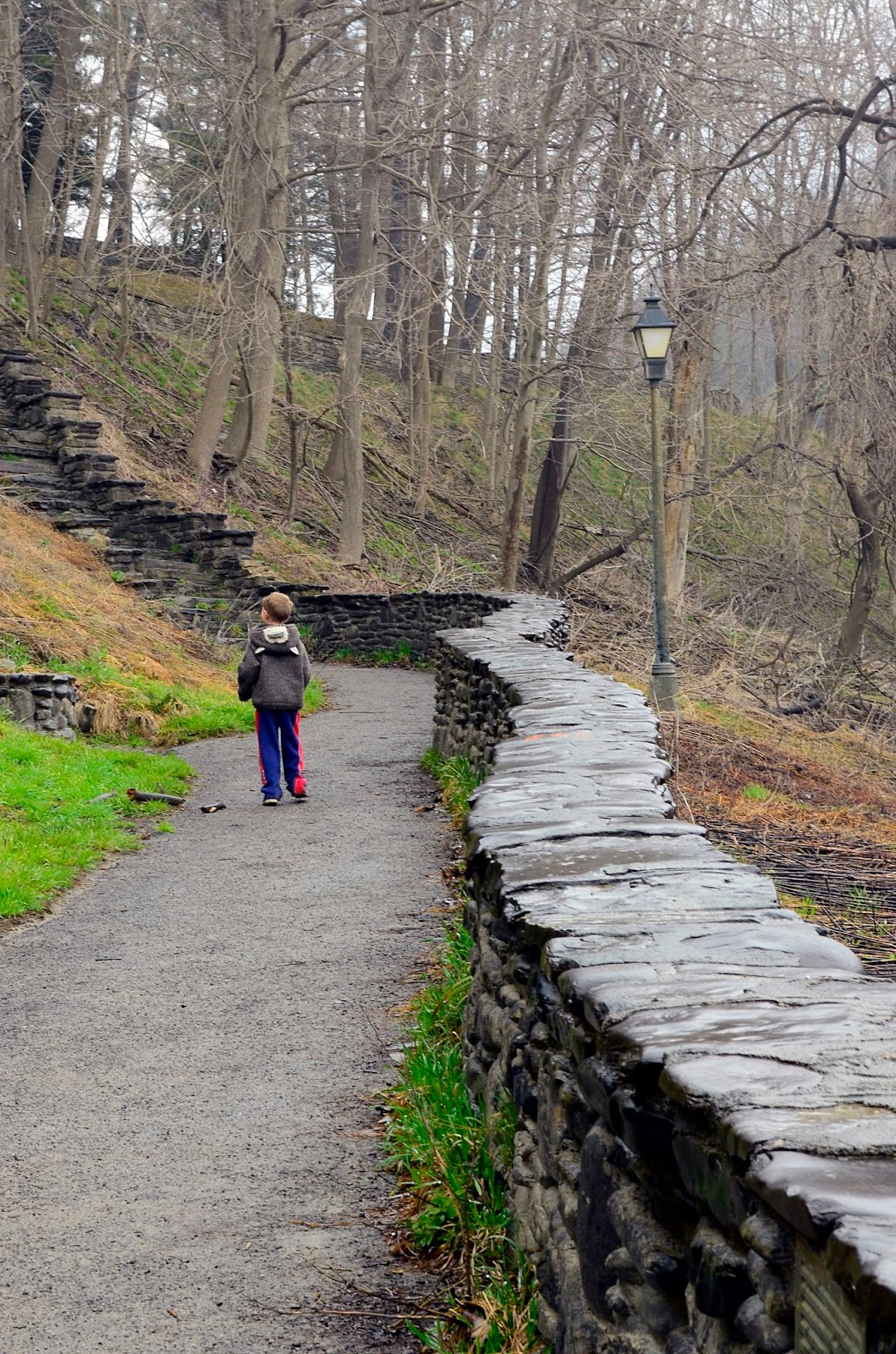 Right next to middle Falls is the Letchworth Estate home. The story goes that Mr. Letchworth first saw the canyon and valley on a train trip, and fell in love with the place. He bought the gorge outright and built his estate (and all those stone walls and walkways) then willed the whole thing as a park to the state. He names his house "Glen Iris" after the rainbow over the falls. Today the house is rented out as "The Glen Iris Inn". You can find the estate info here. It is quite lovely, but we didn't linger here for long. 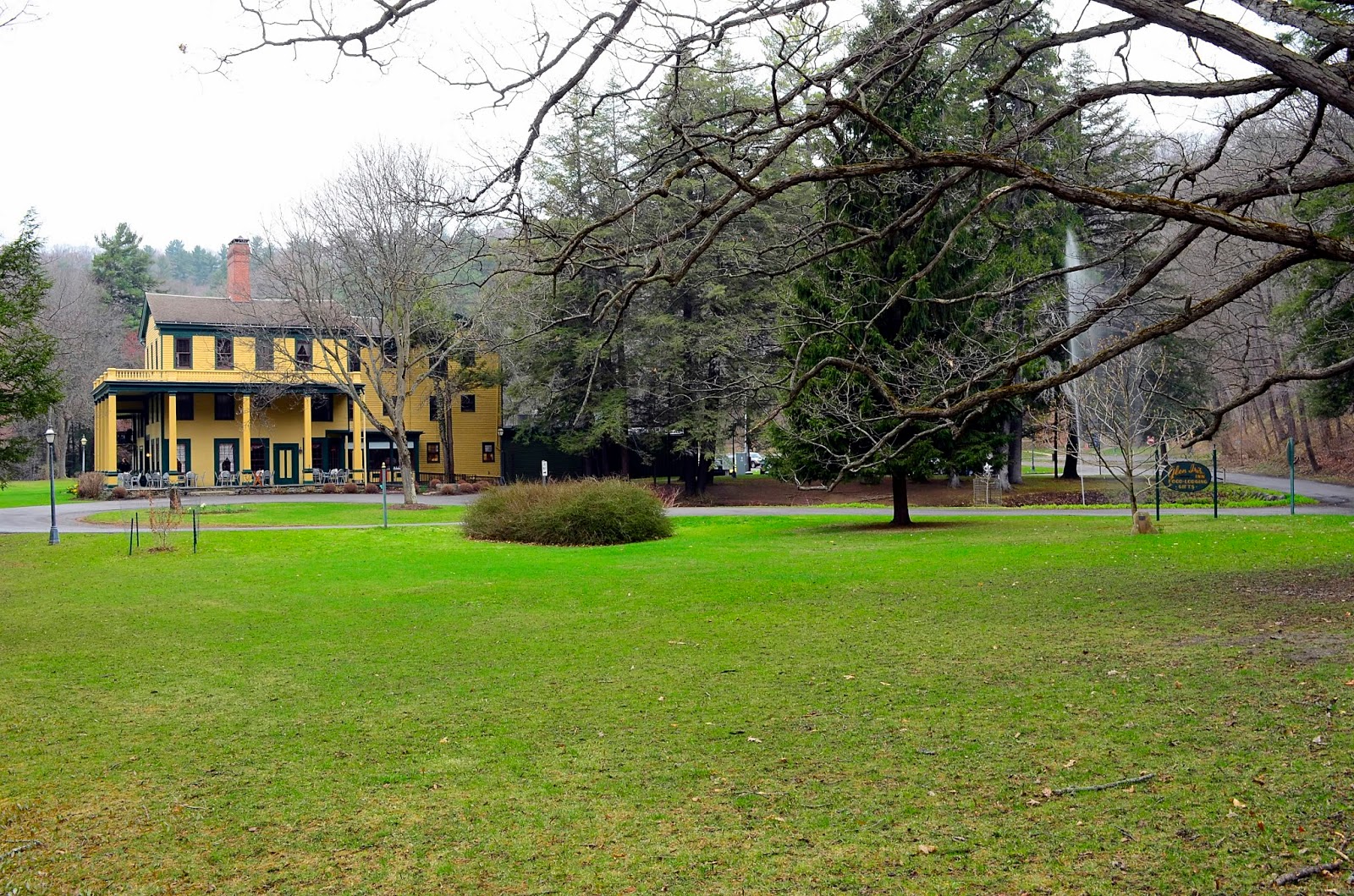 Just down the road from the Glen Iris is this bridge. It is also lovely. Look at all those stones. My back hurts just thinking about placing them all. 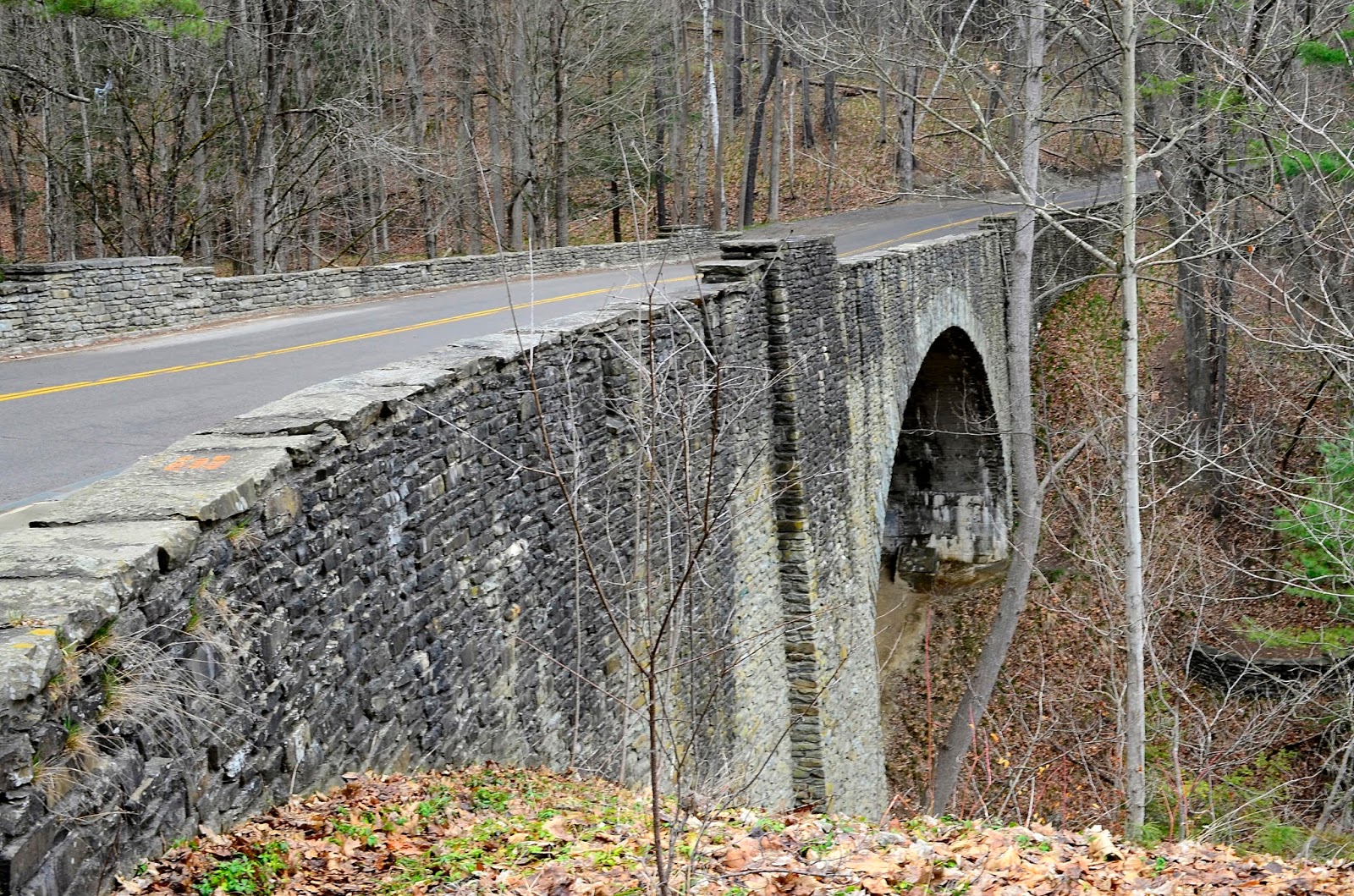 Near the bridge the pathway squeezes into a nice set of stone steps. I told the boys to sit for a picture, and then started firing away while playing with shutter speeds and aperture settings and trying to figure out what would look OK and what would look awesome. 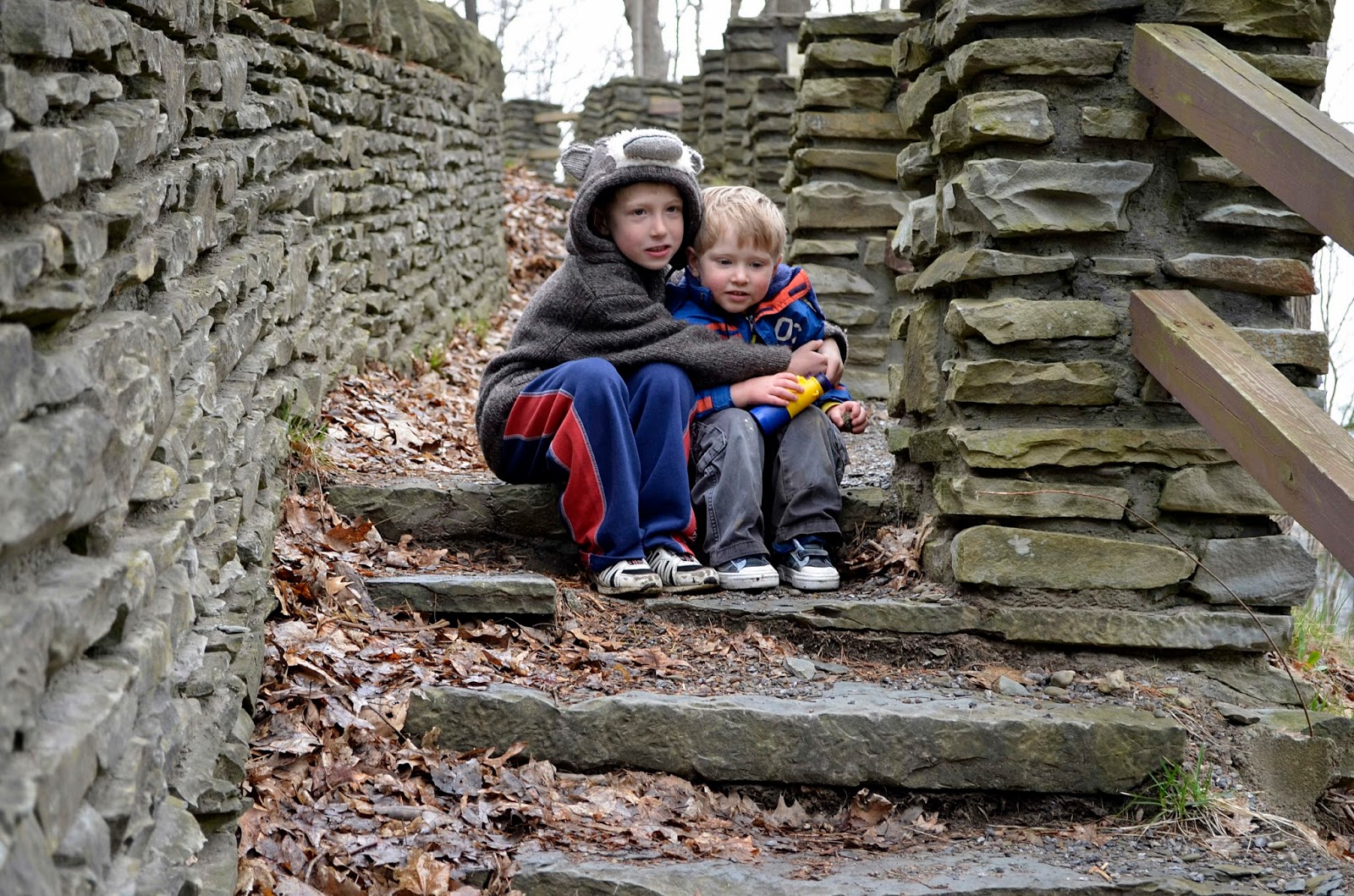 Eventually they got bored. I kindof like the bored pictures better than when they were posing for me. Also today Cuppa wore the binoculars. I'm not sure what he was trying to see. If you are counting, this is Letchworth miracle #4!!! 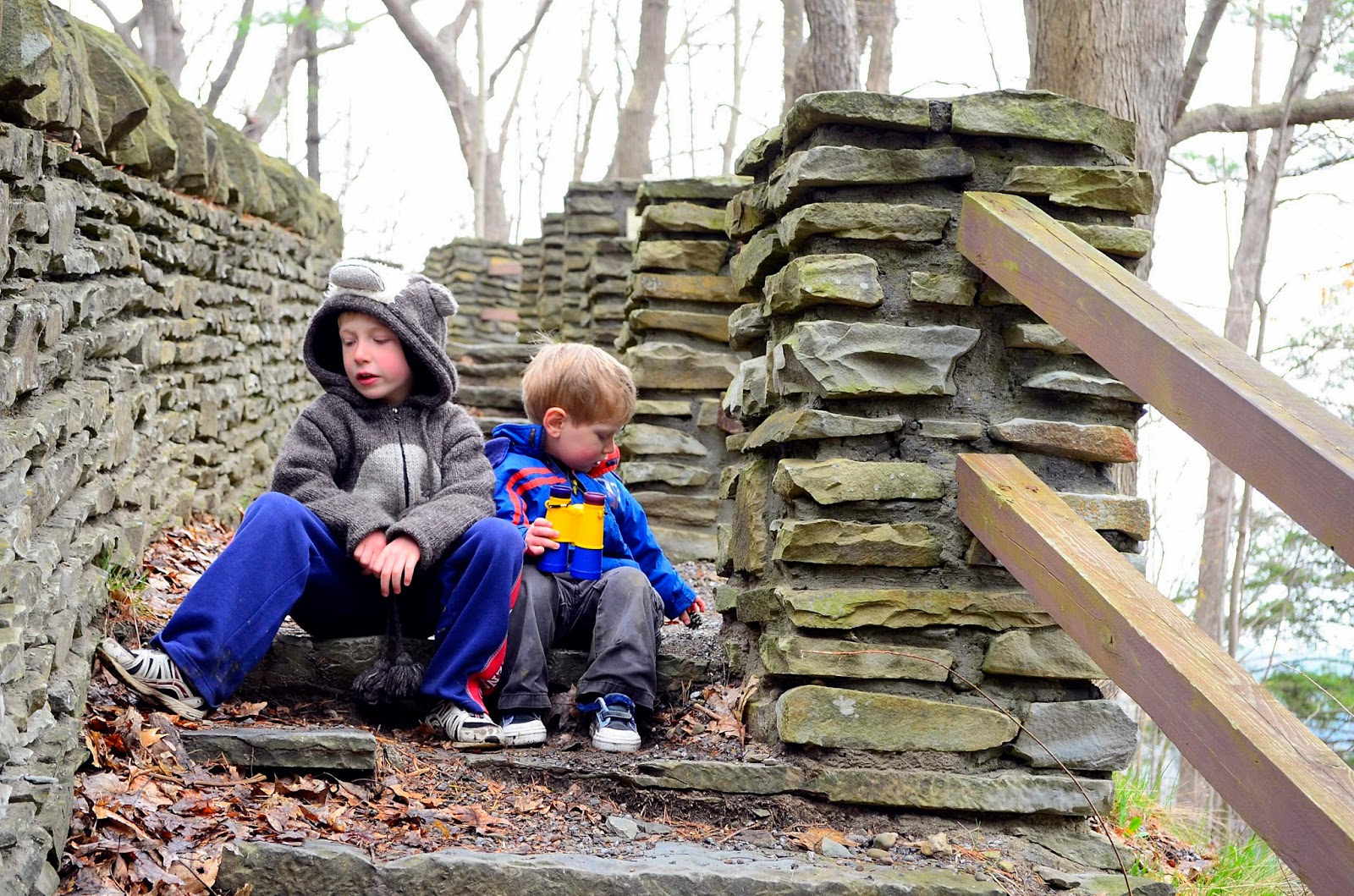 Maybe it was this... 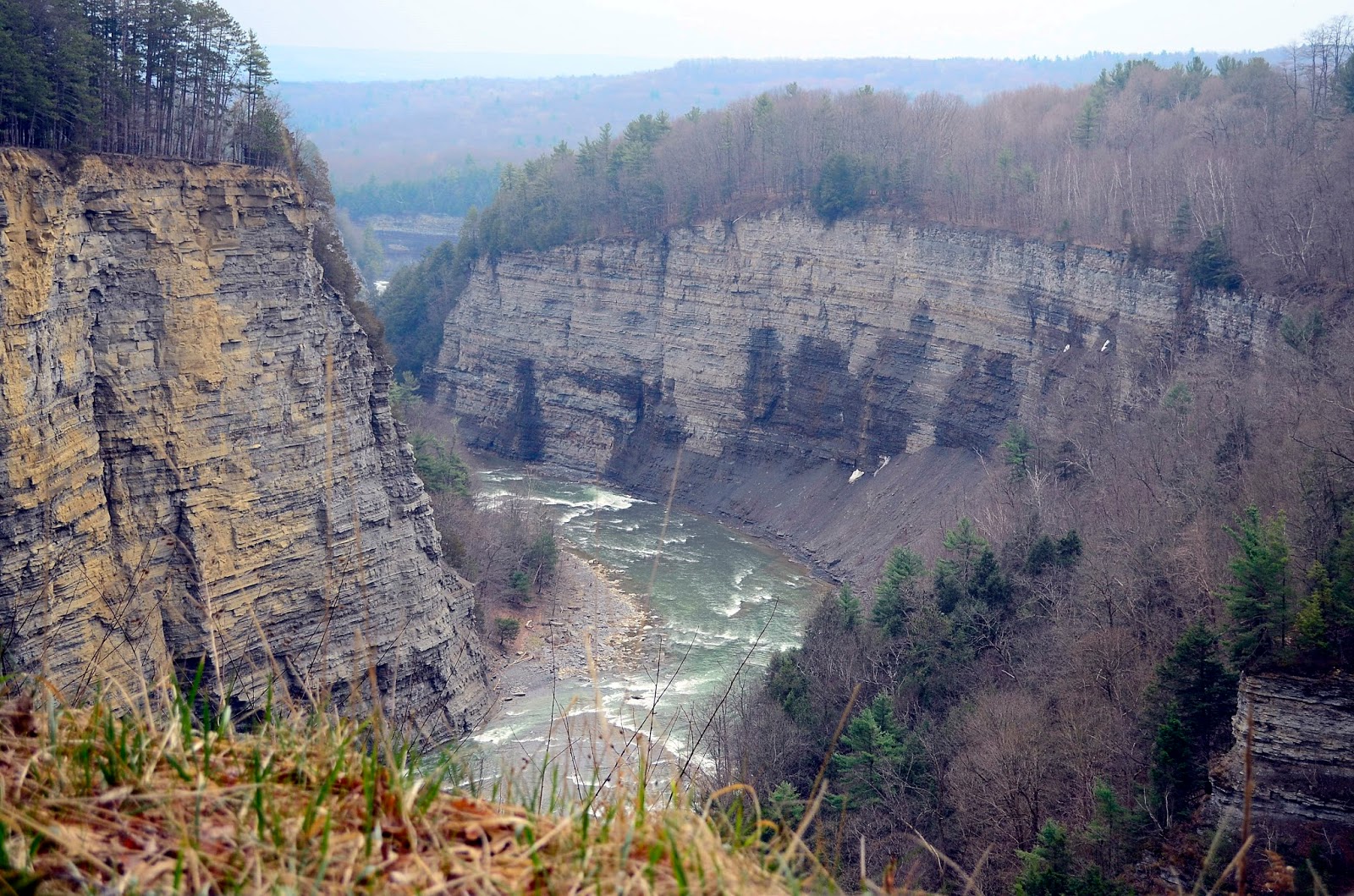 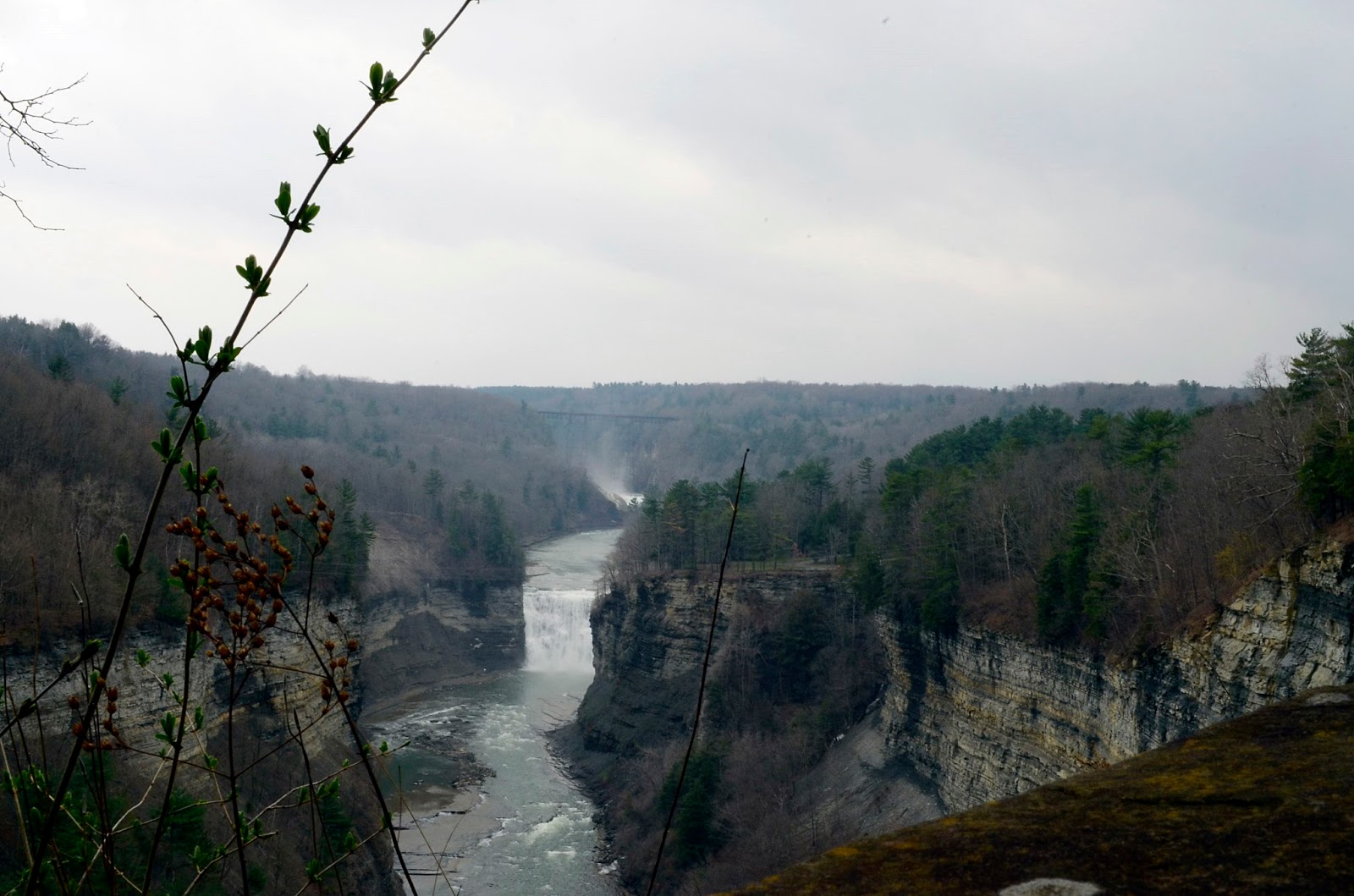 In that photo above, you can see down the canyon to Middle Falls, with high falls and the train bridge way in the background. We had walked a long way, and we still weren't at Lower Falls. All along the way was stairs going up and down as the cliffs followed the river. My feet were starting to hurt. The boys got out the maps to look for a short cut. 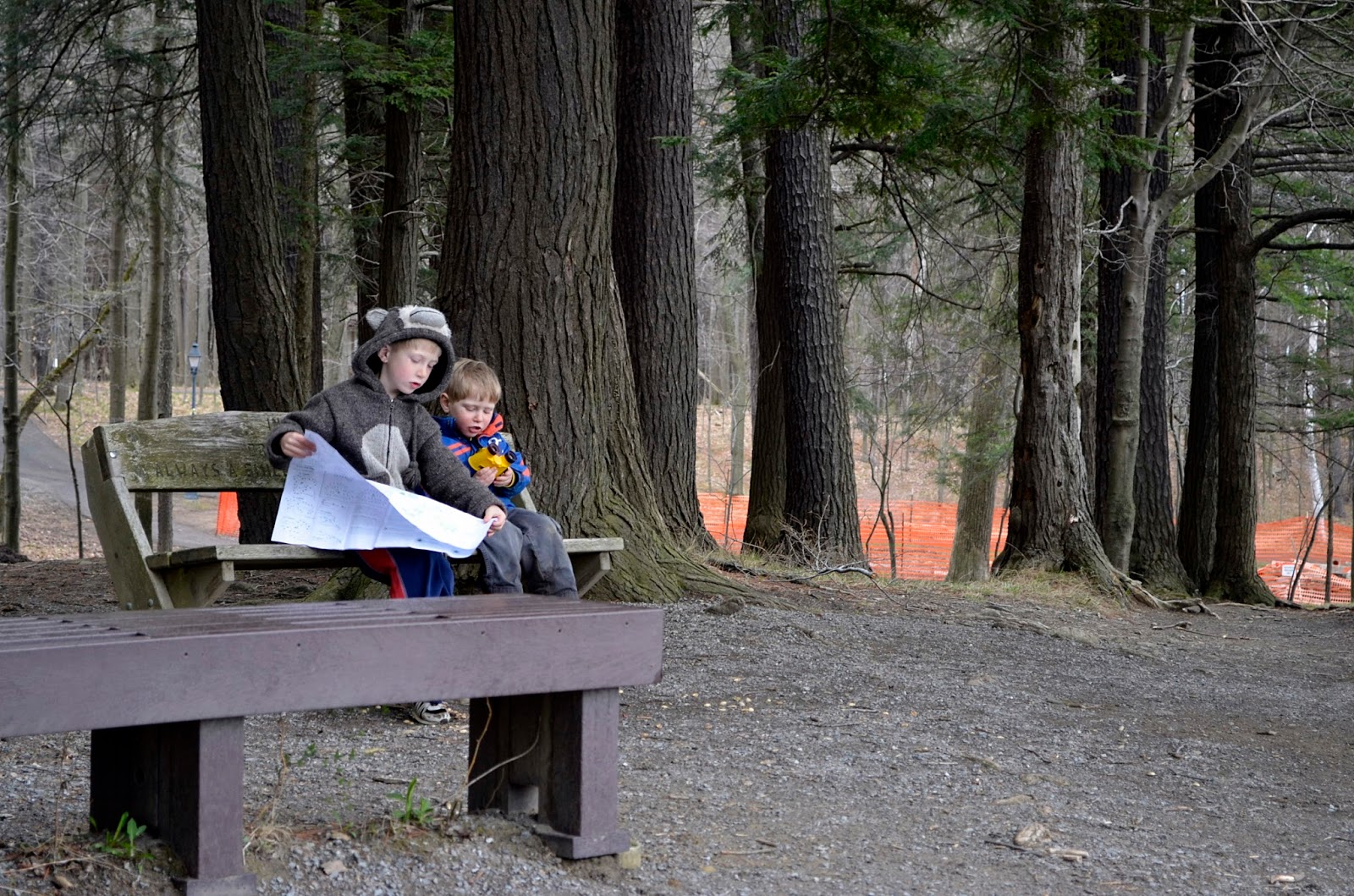 In case you are wondering, there was no short cut. The stone steps had taken their toll. Momma was ready to turn back, I was tired, the boys were pooped. We turned back and headed to the car. We weren't the hardy hiker we had thought.

Here's one last pic of the Narnia lamp at Middle Falls. Buddy photobombed the one good pic I got of this - We'll call it a 5th Letchworth miracle! 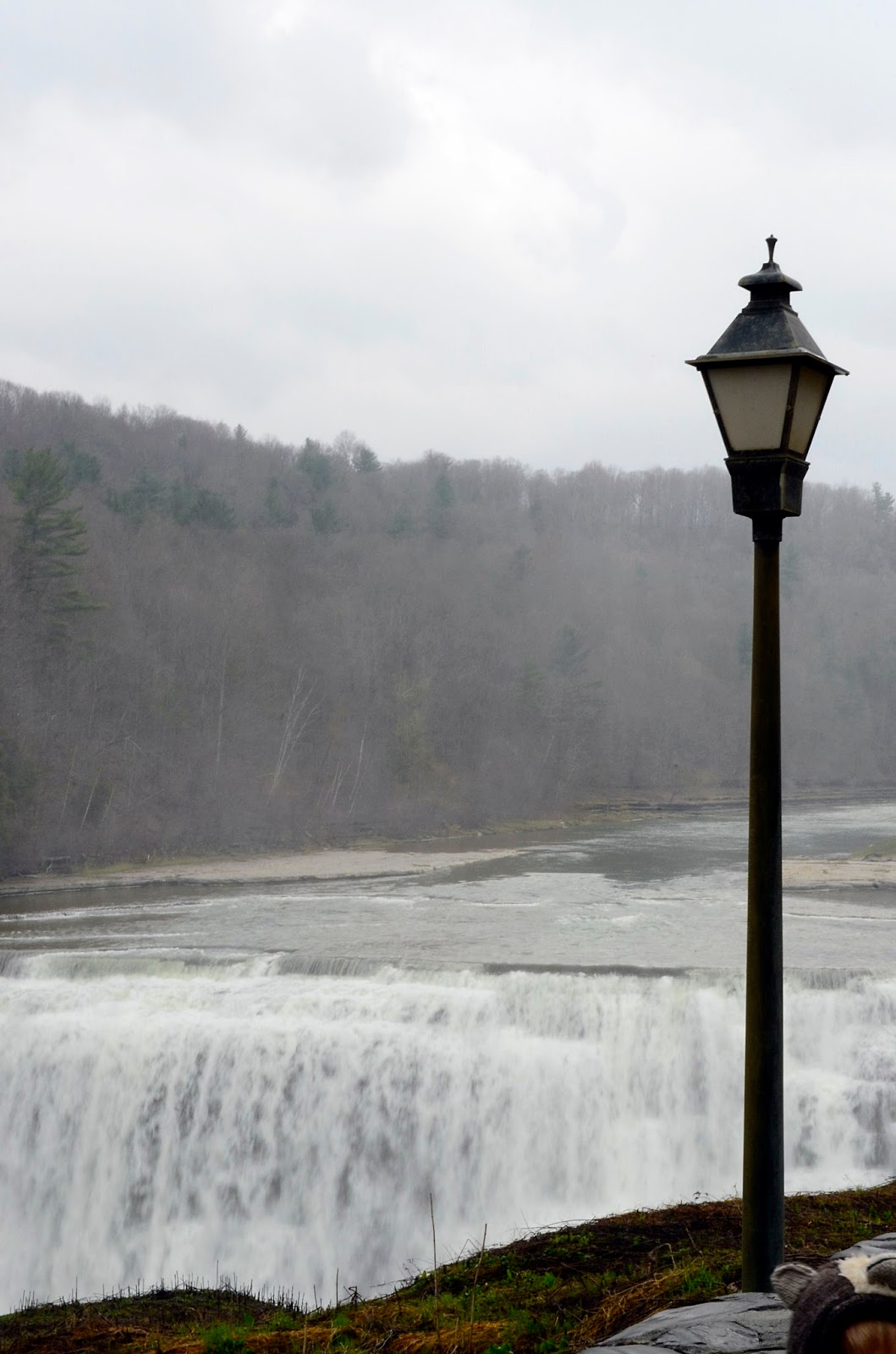 Watch this space tomorrow for Day 2 of our Letchworth State Park weekend.