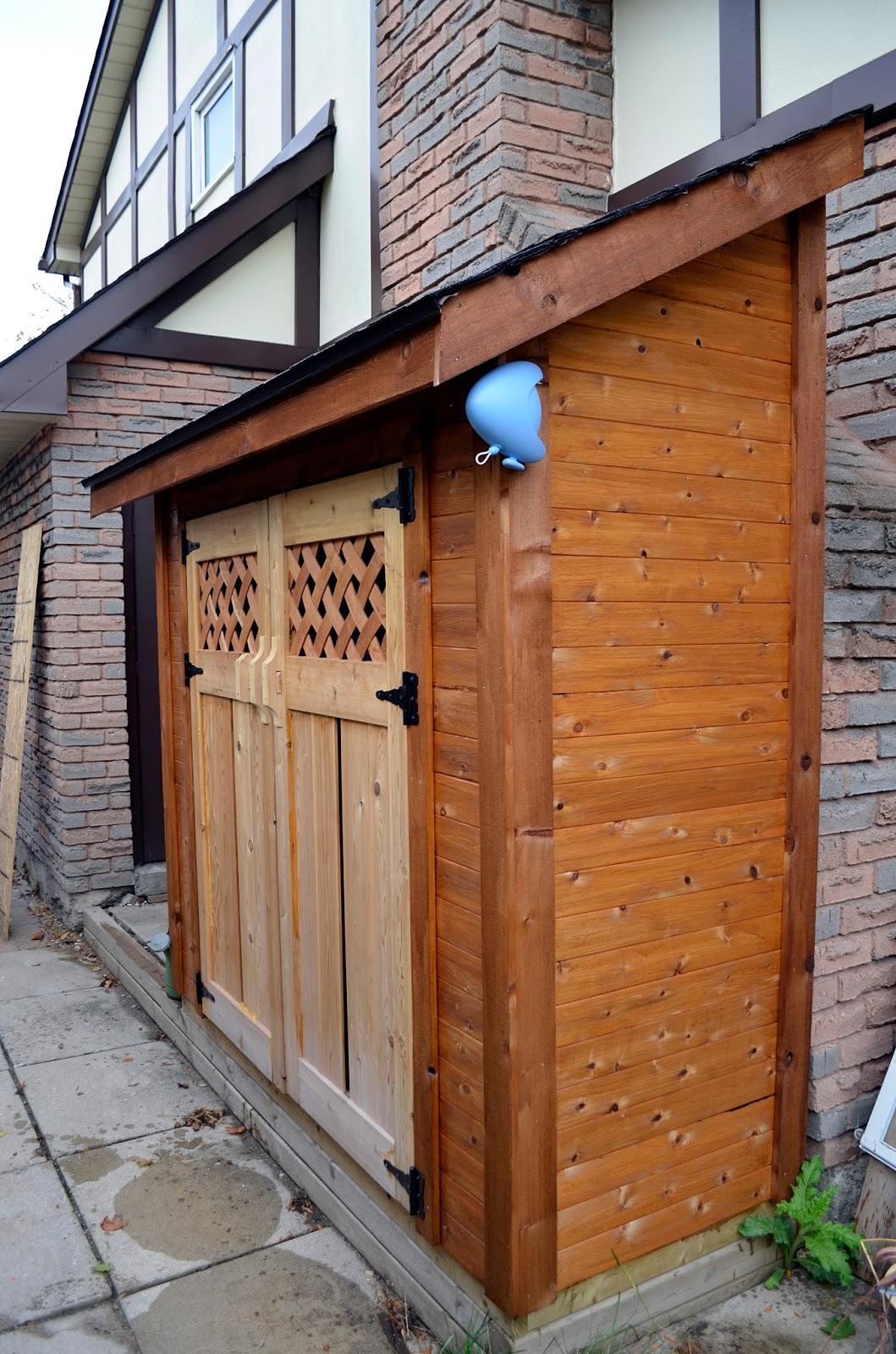 A while ago, I started to build a shed for our garbage cans to call home. I know this isn't a high profile project, but somehow it has eaten up gobs of time, and I have managed to procrastinate on it as much as I have pushed forward. In this post, I'll try to knock off design and build in one article, but if it gets long, I may decide to take a break.

The project started with the realization that I could never get into the front of the garage without tripping over two bikes, a garbage can, a blue bin, whatever crap had been removed from the cars most recently, and that the possibility of being knocked out by falling garden tools was a very real possibility as I skirted all the other hazards. I decided that this small project could eliminate the garden tools and garbage cans as obstacles, and open the path to remove further obstacles in the future.

The shed design is pretty simple. My plan is for something tiny - 30" X 85" and fit into the constrained space of a few patio pavers pushed up against the chimney in our back yard. Today that space is home to an outboard motor and a handful of empty planting pots, a couple anchors, and general detritus which should be stored elsewhere. Here is the site, pre-shed. 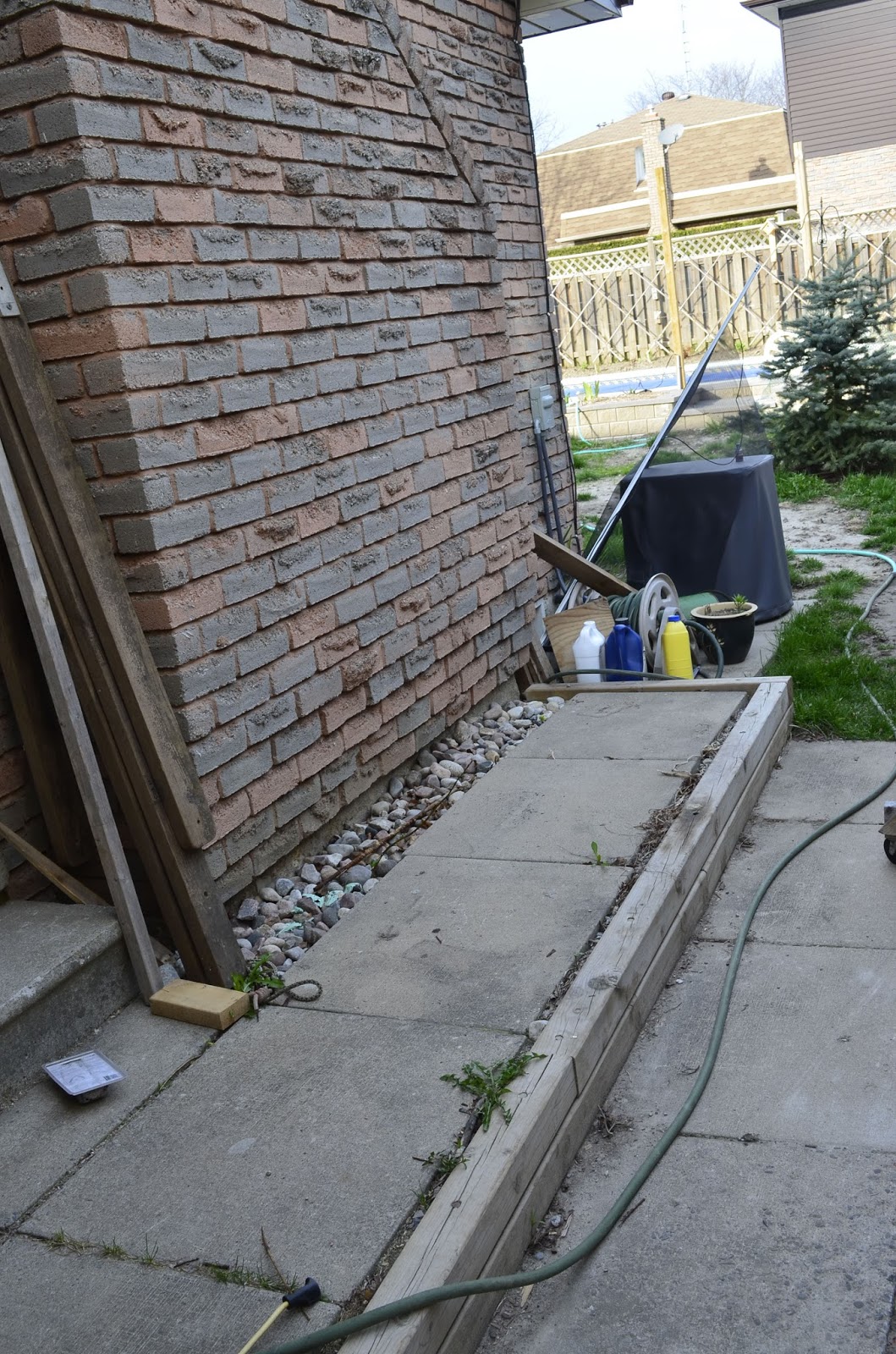 To begin, I built a base. A lot of folks would have foregone this step, but for me, having a floor attached to the bottom of walls adds structure and firmness that I am uncomfortable not having. The floor was simple. a handful of 2" X 4" pressure treated boards were formed into a rectangle, then every 16" or so I attached cross pieces to add strength to the floor. To the top of this I screwed a piece of OSB subfloor, and trimmed it to match. Making the floor took less than an evening, and allowed me time to tune in to Montreal Canadiens beating the Bruins. I saved the scrap pieces of OSB. I don't know what for. 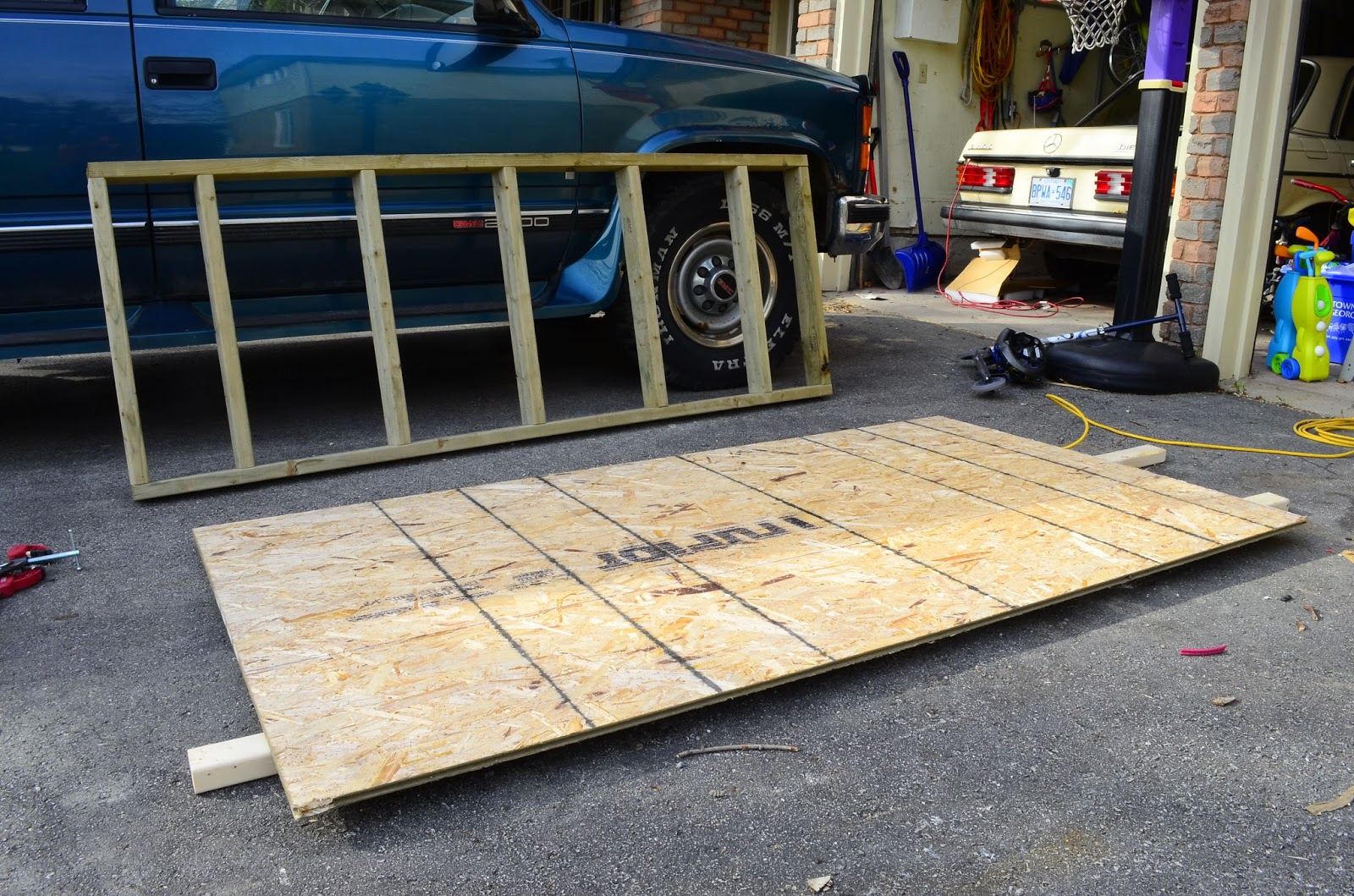 To trim the OSB floor to size, I drew a cutline, then clamped a 2"x3" to the OSB to act as a guide for the saw. I propped up the saw on some lumber to prevent the blade from hitting the driveway. This allowed me to get good accuracy and a straight cut. 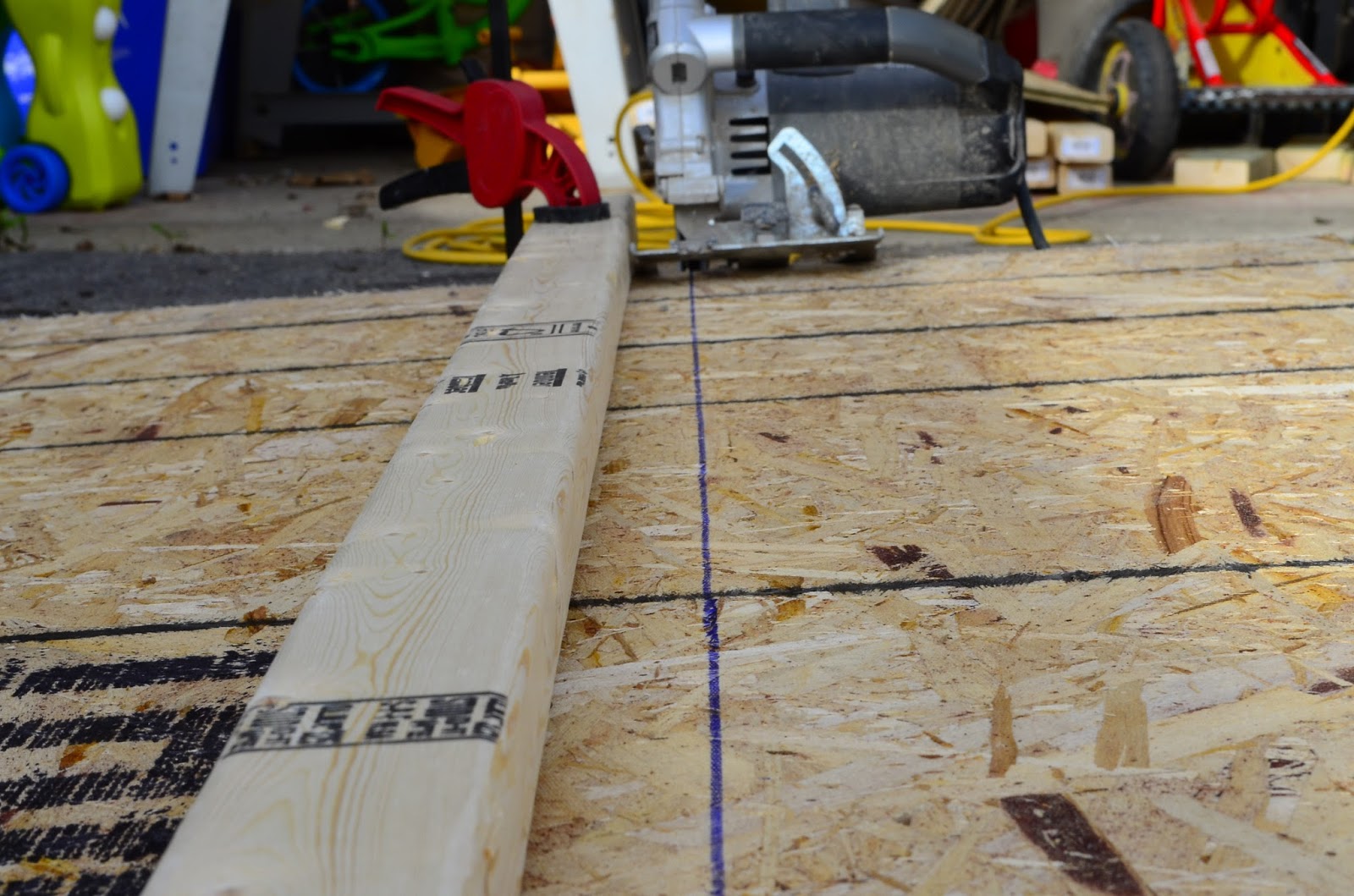 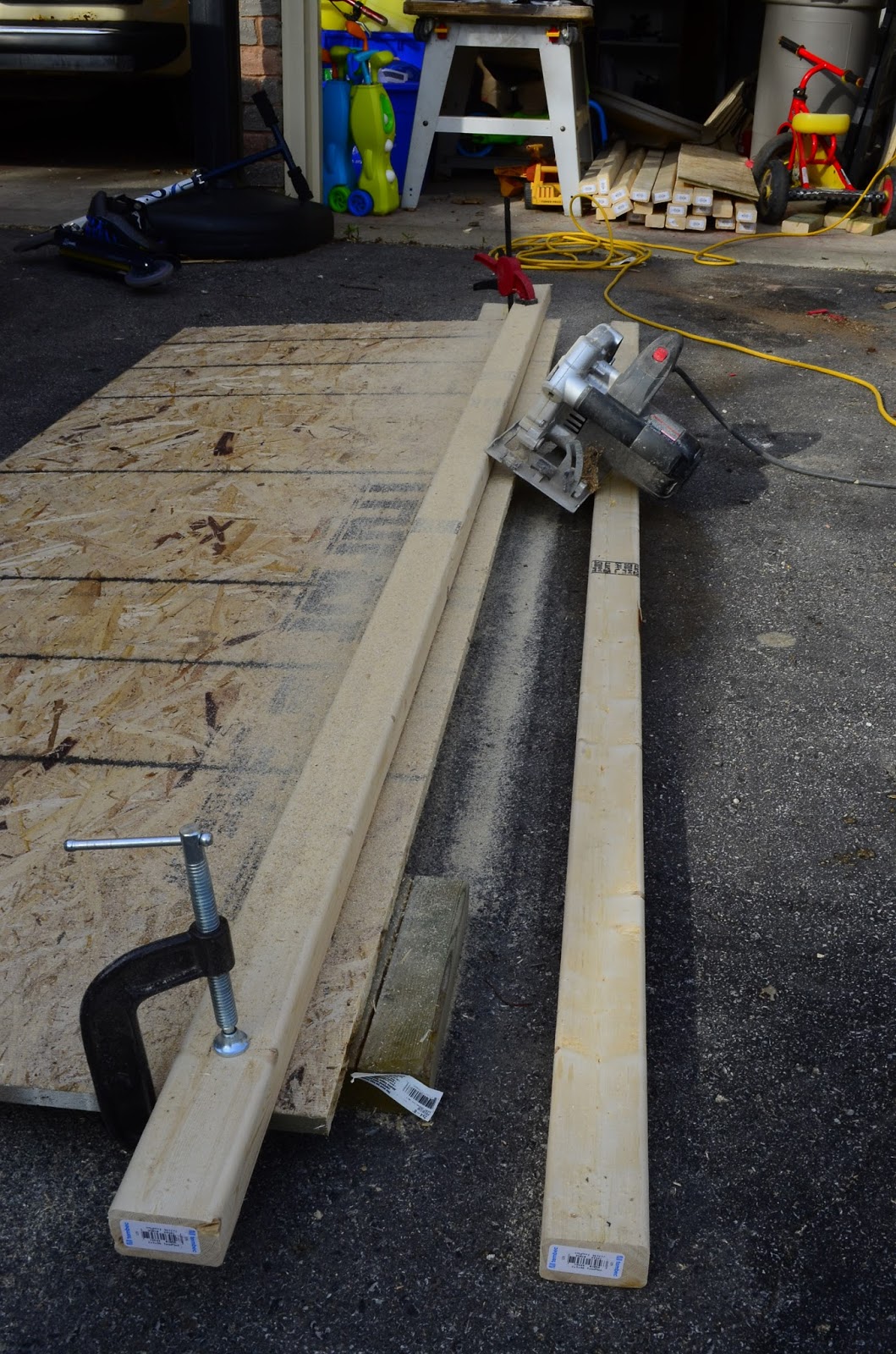 I checked to be sure the base fit the site, it looked just about perfect! 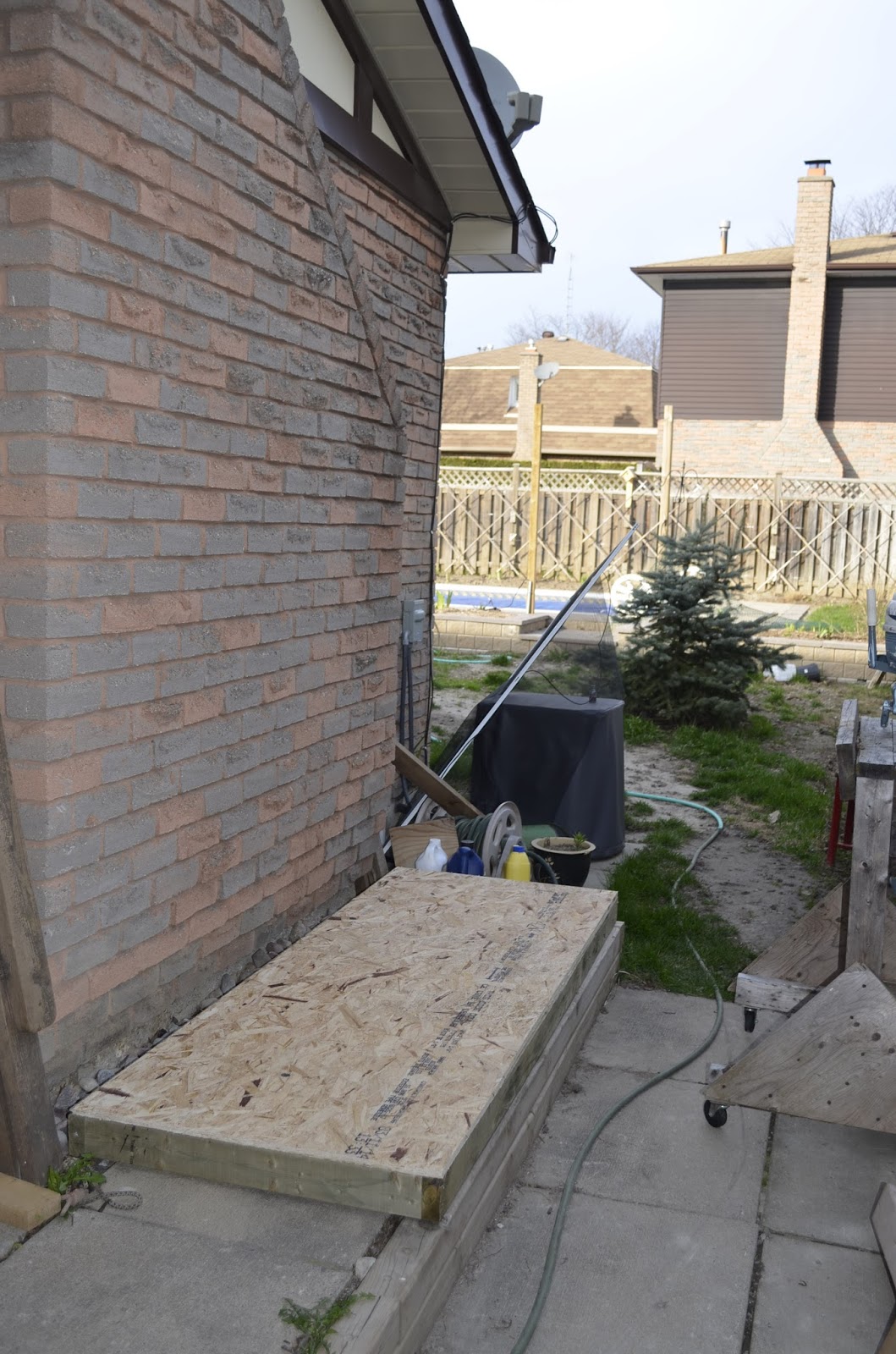 Next I built the frame for the back wall of the shed. I used 2" X 3" boards for the framing since it will be a small auxiliary structure. I also used regular SPF stud grade lumber rather than pressure treated wood. I don't see a need for the extra chemical treatment where the wood will be inside the shed, not exposed to the elements. I covered the back wall of the shed with T-111 siding - an OSB pressboard product designed to look like siding, but not to really offer much in the way of style or protection from the elements. 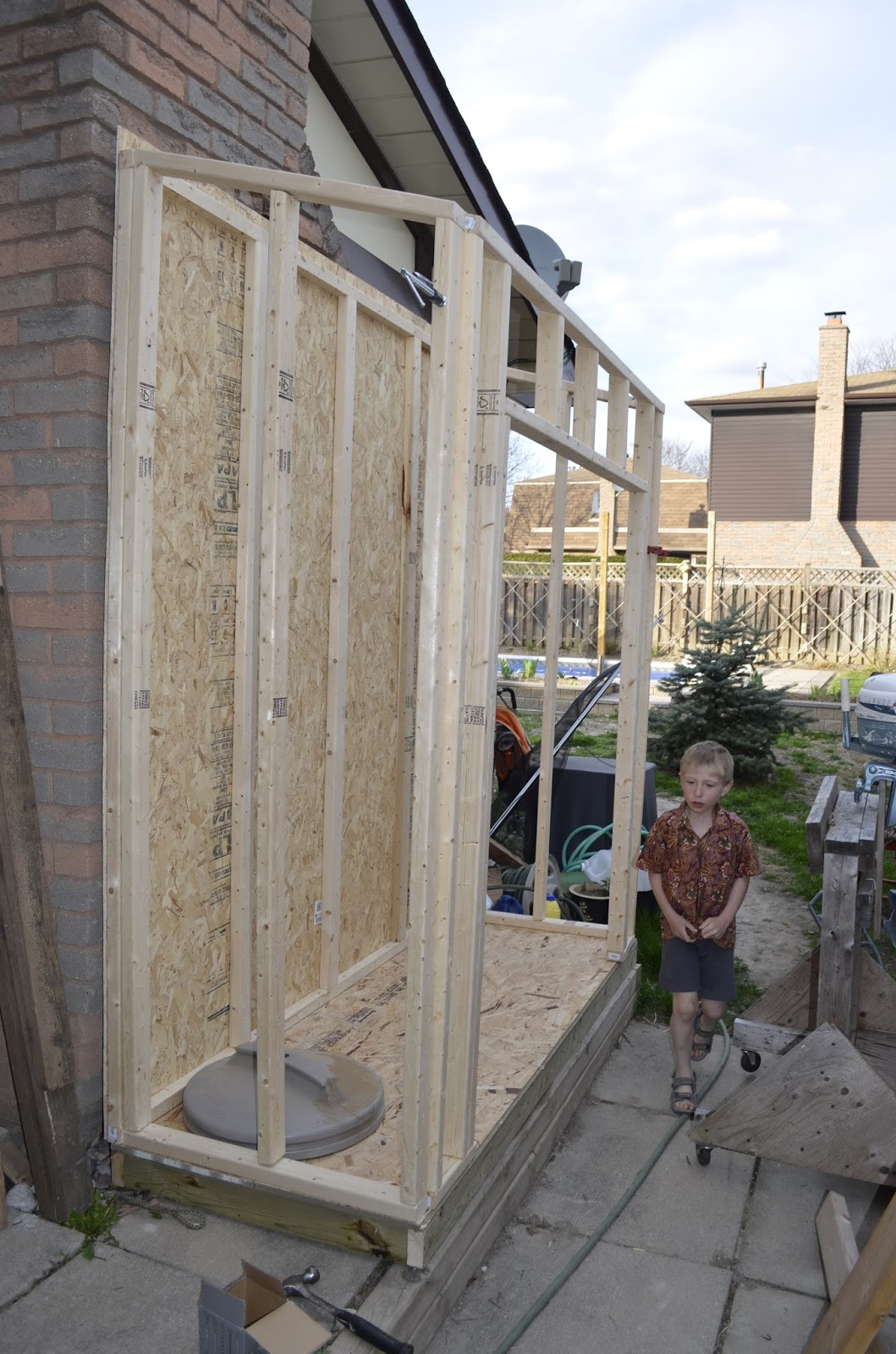 Since I want to store shovels, rakes, and hoes in here, I made the roof of the shed tall enough that long handled tools should be able to be stored in it or on the shed walls. Looking at plans online, I found that a lot of garbage sheds have a 30° roof line on them, so I used that as my angle for the roof. Only after I had framed up the whole shed did I realize what an 8 ft high shed, 30" deep looks like with a 30° roof angle. In case you are wondering, the best word I have is "imposing."  Realizing my mistake, the neighbours let me know just how ugly the shed looked from their side of the fence. I appreciated their design taste, and agreed with them, so let the shed sit a few days while I mulled over ways to fix the problem.

Although it is an expensive material, I managed to keep costs down by using cedar as an exterior finish. I had about 5 bundles of cedar tongue and groove wainscot that we bought for a house long since sold, and have never found a home for. Here I installed it horizontally (wrong direction) as an exterior finish (it is meant as an interior material). I am hoping that I can seal it up with stain and that it will last. If it doesn't last, I can replace it easily, so I'm not too worried about the material. My biggest concern is whether racoons will chew through it to get at the garbage cans. 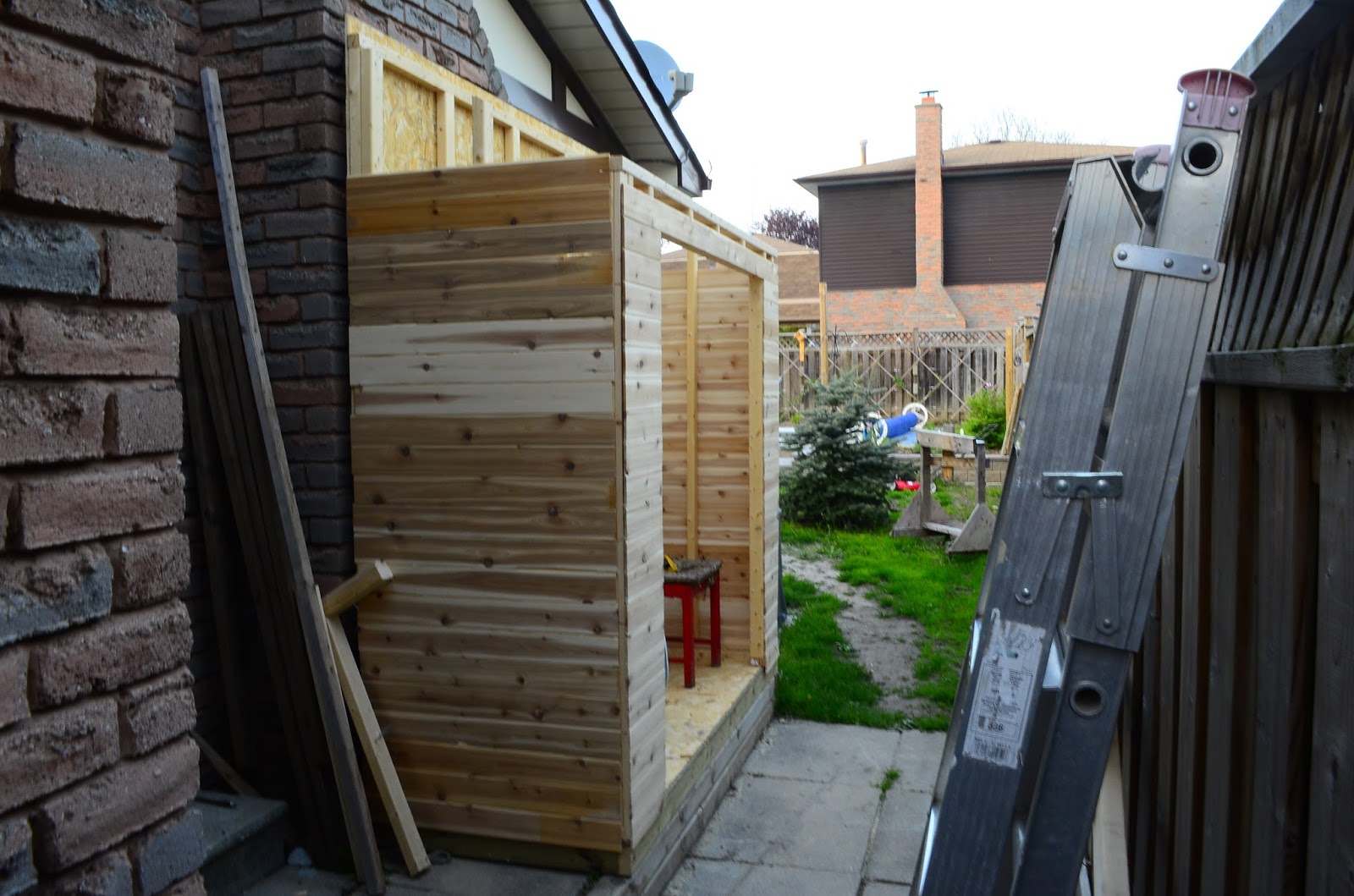 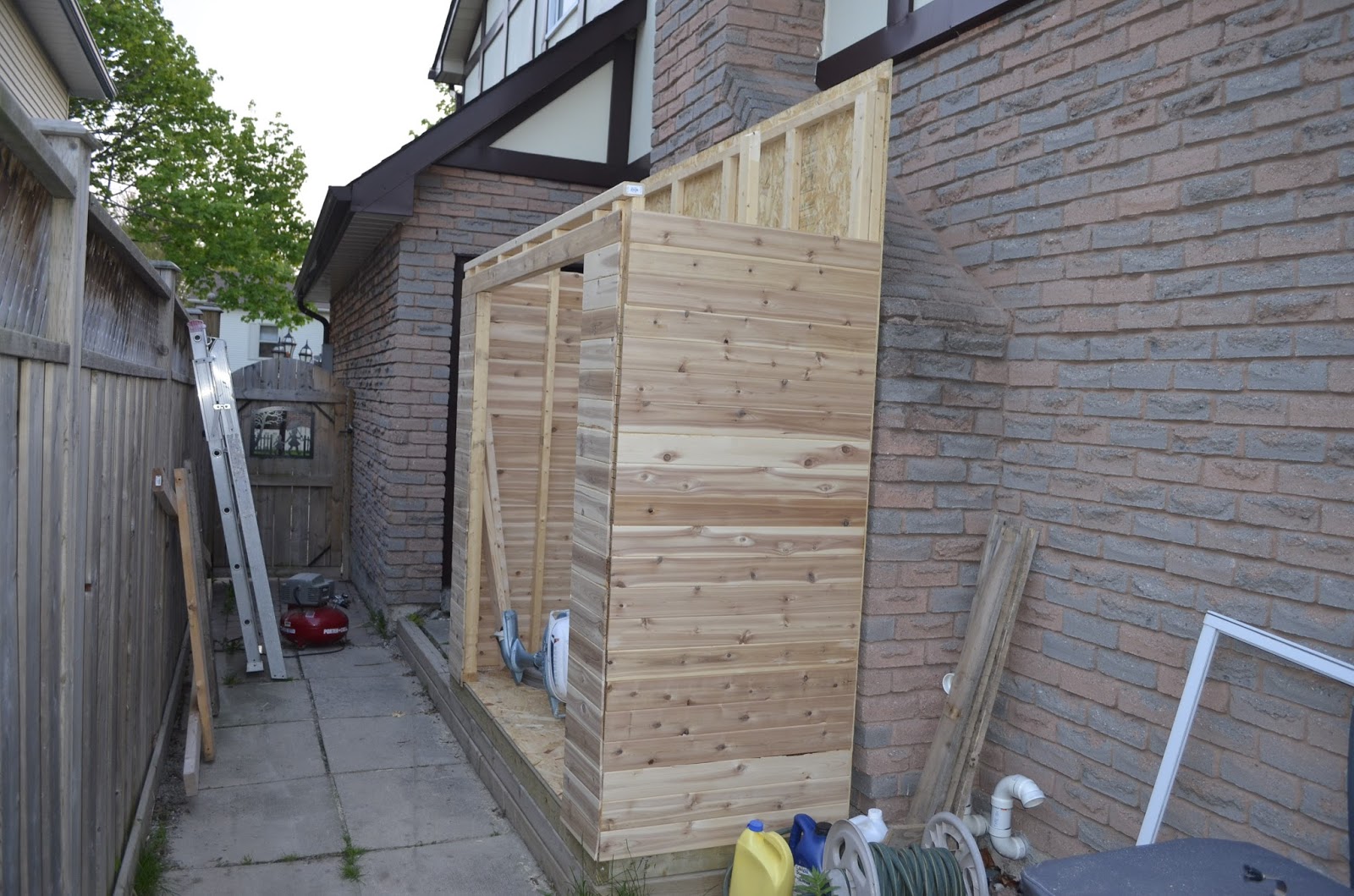 Eventually I came up with a solution to the height issue. Using my Skil saw, I cut down the front of the shed by nearly a foot, and recalculated the angle of the roof to close to 60°. This looks much better and will allow me to use a single 4' X 8' sheet as a roof deck. Some quick hammering, and I had a top plate on the front of the shed. On the sides, I will tie in the framing to the rafters for now, but likely add in strapping later on to make sure the framing stays strong and doesn't move.

For the roof, I cut birdsmouths to make rafters. The cuts went surprisingly well using my compound mitre saw to cut boards to length and angle the ends, then cut the birdsmouths in my band saw. Although this could be done using a jigsaw, the short rafters, and availability of the tool made the bandsaw a great candidate for the job, and I was surprised with how well it went.

Cutting rafters is a challenging but rewarding job, and I feel good knowing how to stick frame a shed roof.

Using a scrap piece of lumber, I cut the ends of a test rafter to 30° on the mitre saw to match the roof angle. 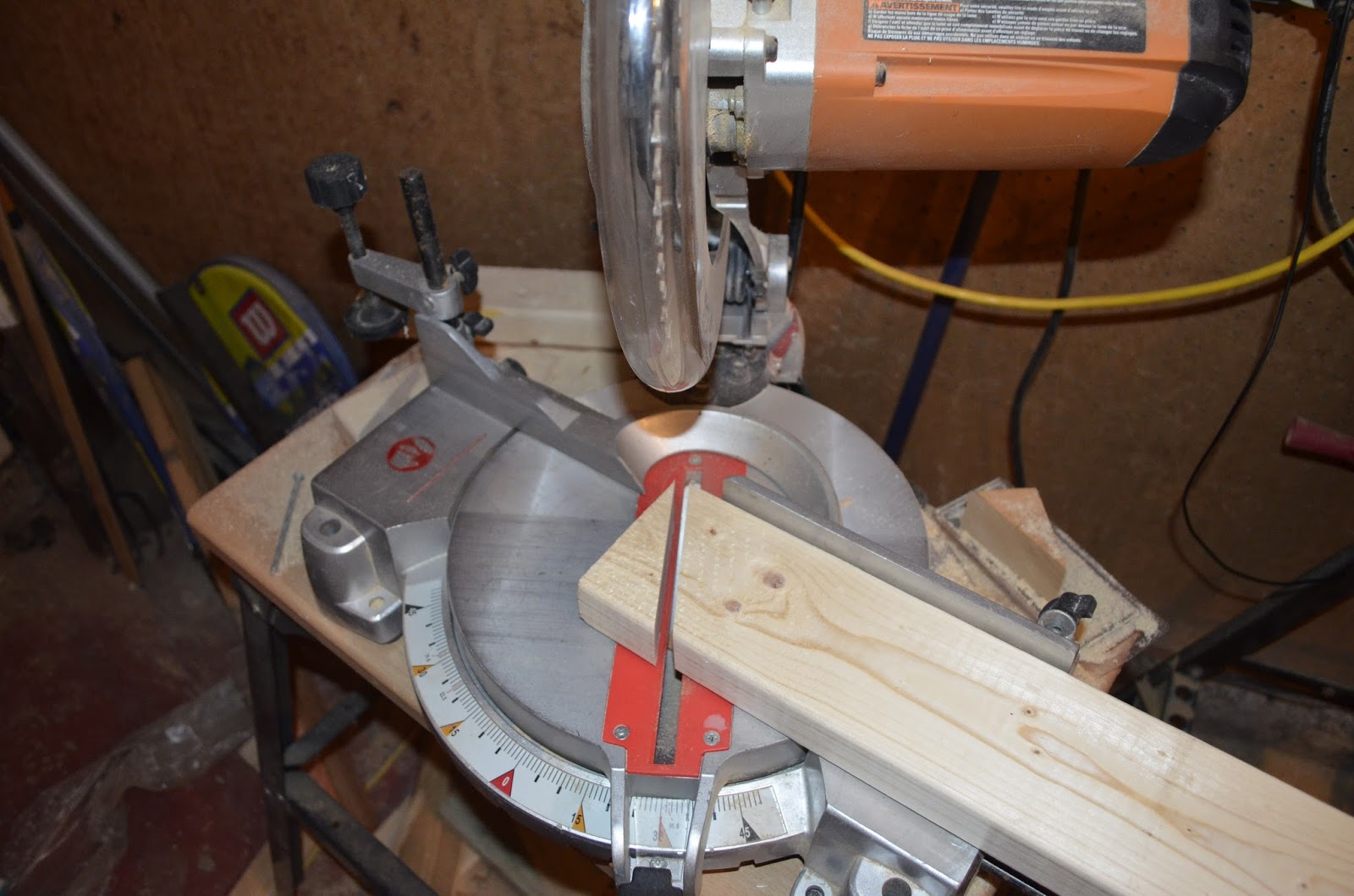 With the tops and tails cut, I could make the birdsmouths. A birdsmouth cut allows the rafter to sit flat on the top of the wall framing (the sill) and makes the roof far more stable. The challenge is laying out the first rafter to sit properly. In order to do this, I set the rafter on the shed, and using a square, mark the vertical extension of the inside of the ridge board. Similarly, I mark the extension of the outside of the wall sill. Since this is a shed roof, the back wall framing will act as the ridge. I set the cut to go about an inch and a half deep, then mark a line perpendicular to it. These two small triangles will form the birdsmouth cuts.

With the test rafter cut, I could go to the test and see how the fit is. In a perfect world, all the geometry would line up, but rough framing is usually not perfect, so the rafter may need tweaking. Once it looks good, I test it in a half dozen spots along the roof in case the walls are out of plumb or aren't parallel. I tweak the test rafter until I am satisfied it is the best fit I can get, then set it aside to use as a template. Ill trace its cuts on to the good 2X4's and use the test rafter as a fill-in someplace in the middle since it is so marked up and beat up. 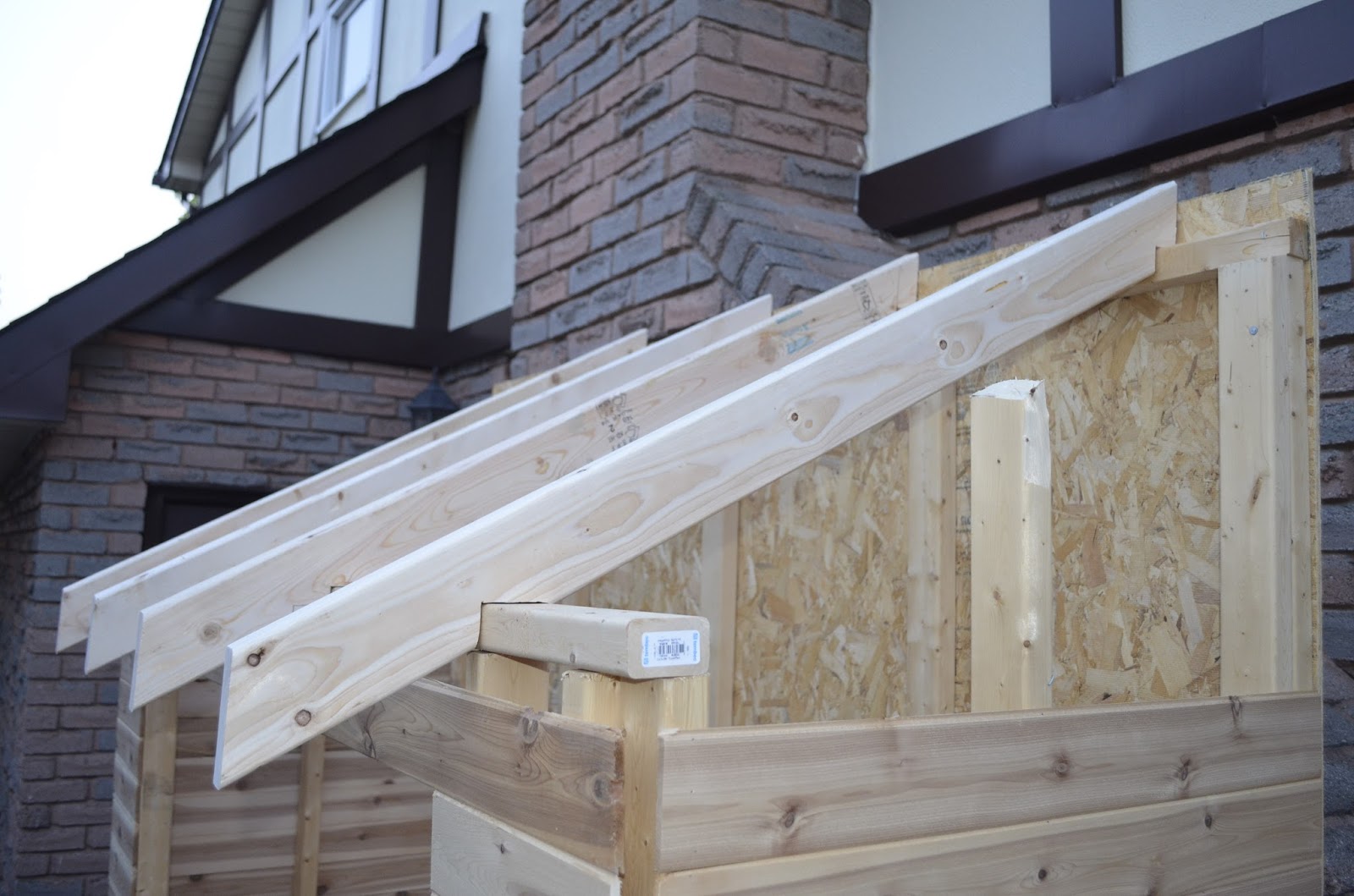 With all the rafters in place, things are starting to take shape! 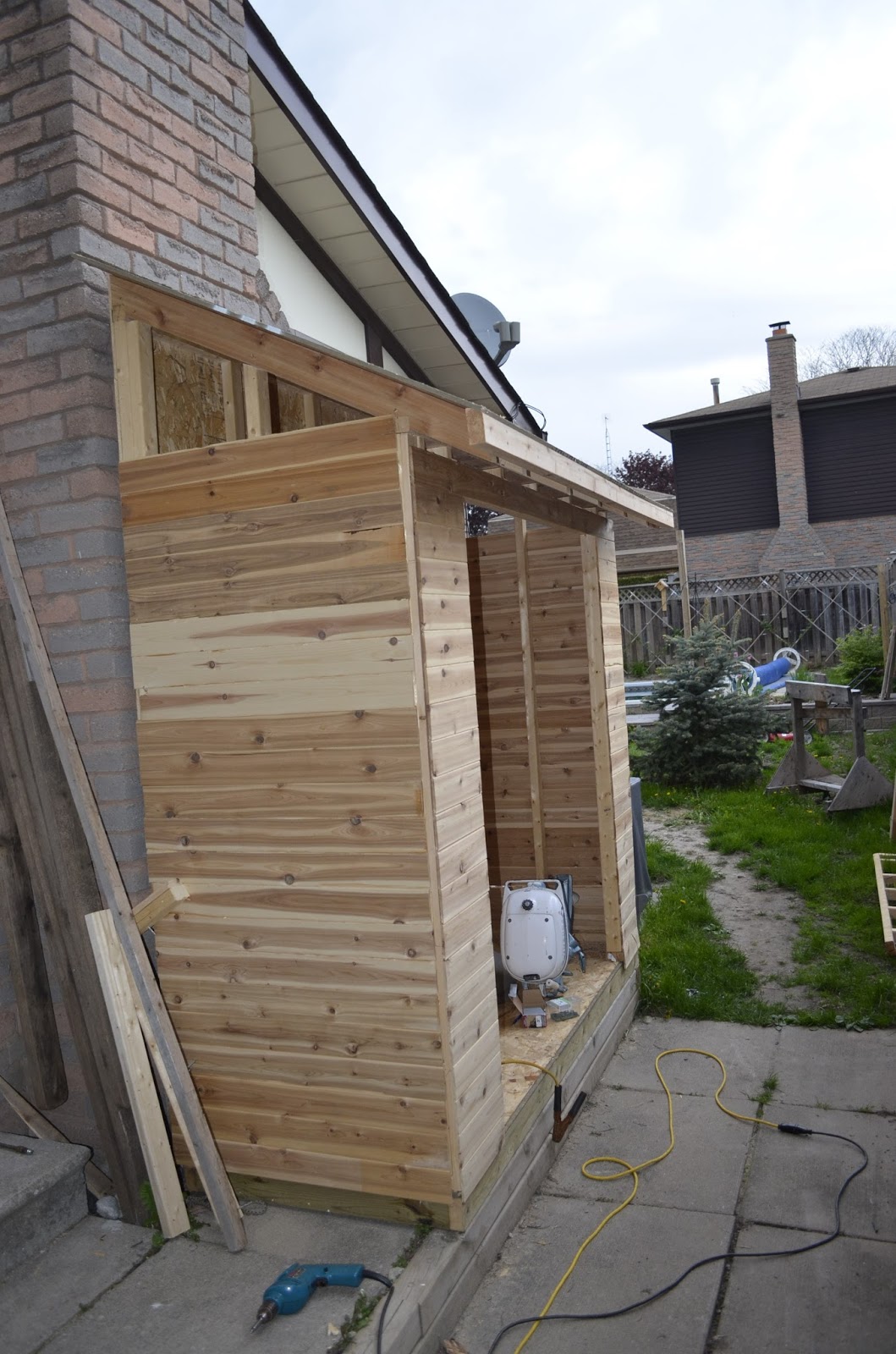 Now that I know what angle my roof and eaves will be, I forged ahead with wrapping up siding the shed, and trimming out the soffits and fascia. I thought that rough hewn western red cedar would make a nice contrast to the eastern white cedar I had used as siding. The next few pics show the siding completion, rough cedar trim, and the roofing going on.

By now the Canadiens are playing the New York Rangers, which means this project is taking waaaay tooooo lonnnnng. The roof is now complete, and its time to trim the front door. I am hoping to get eth door jambs and trim up tonight, so I can start building the doors. Door building can go late into the night since it is all done inside the garage, with just final fitment outside.

Hopefully my next update will have the doors going up!