May 2-4 escape to Darlington Provincial Park 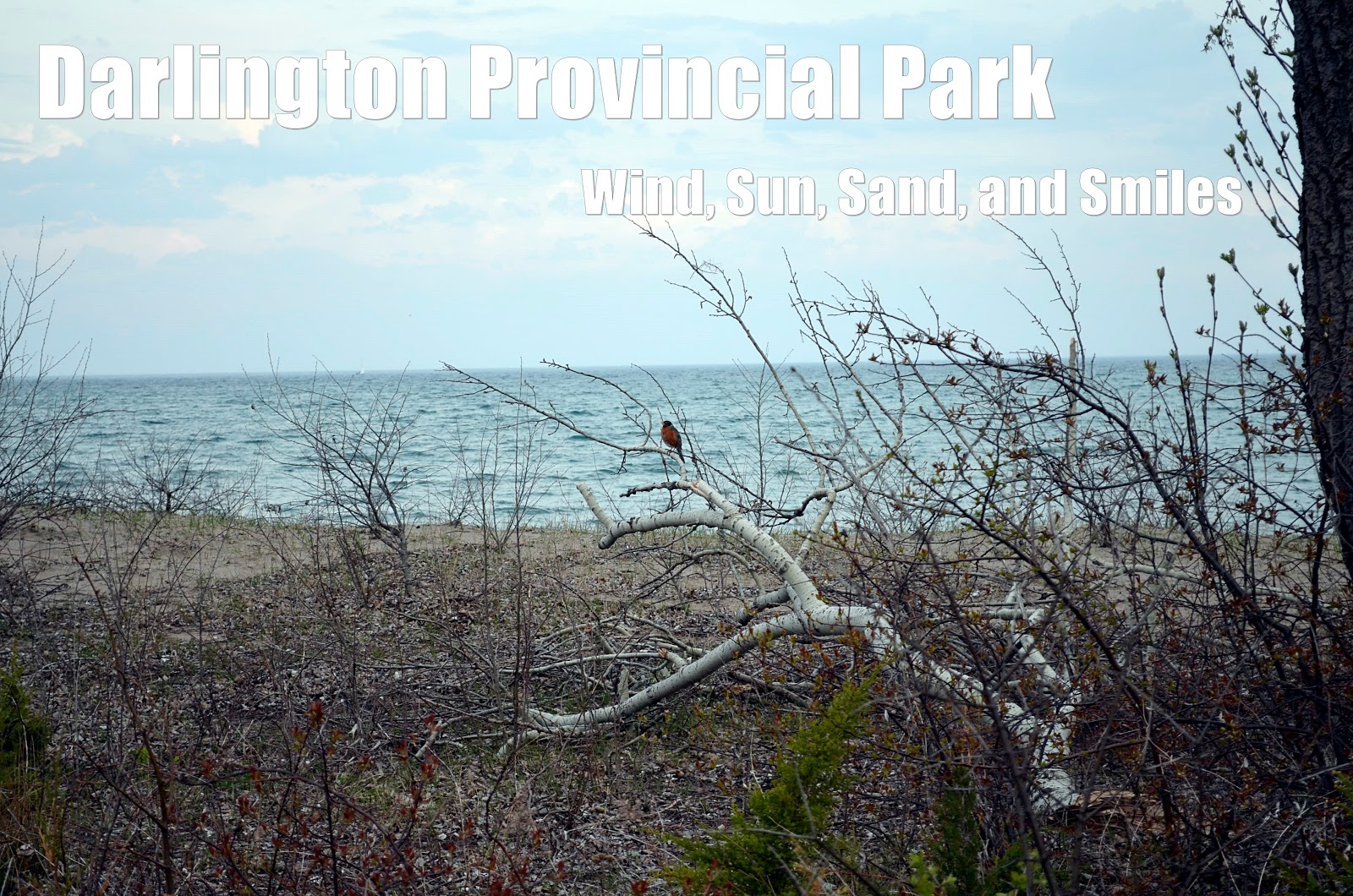 "The 24th of May is the Queen's Birthday,
If we don't have a break, we shall all run away!"

Well, we almost got blown away. This year we decided to forego the usual grind up Highway 400 from Toronto to "Cottage Country or Algonquin, and instead opt to go camping as close to home as was practical, and so on an overcast, fiercely windy day, we found ourselves struggling to set up tents on a lakeside campsite in Darlington Provincial Park, while waves crashed on a pebble beach some 30 feet below us.

Actually, the weather conspired against us long before we loaded the cars to go camping. Wednesday night, the night of the first races of the season at the Yacht club, I was out sailing when a storm front rolled and writhed its way northbound across Lake Ontario. The cold rain fell in a sheet, with piercing ferocity, soaking me through in an instant, and utterly swamping the boat, sails, and sailors. We turned tail, and returned to our slip. The weather; however, continued through the evening such that my shoes were completely underwater on the walk across the parking lot to the car. The sheer volume of water was enough to back up the gutters and drains in the streets, and to wreak havoc on our yard work plans for the rest of the week.

Of course the weeds and grass thrived on the spring rains, and jumped up suddenly and without warning.

Which leads us to Friday afternoon which was when I cut the lawn, packed the truck, and consulted Google Maps to see just how bad the holiday weekend traffic was to get out of town and to the provincial park. Google cheerily replied that he drive would be 30 minutes in current traffic. All things considered, I figured that was acceptable for travel to a nearby park on one of the busiest travel days of the year.

Ten minutes later we pulled into the park, with Chuck and one of her friends in the back seat.

I had booked our site very early, and so got what appeared to be a prime site on Darlington's website. Our site was perched atop a 30 foot sand bluff, overlooking Lake Ontario. We only had one neighbour, and although it was a bit of a hike from the site to the nearest washrooms and water spigot, I figured the views and privacy were a fair trade for the lack of amenities the spot offered. 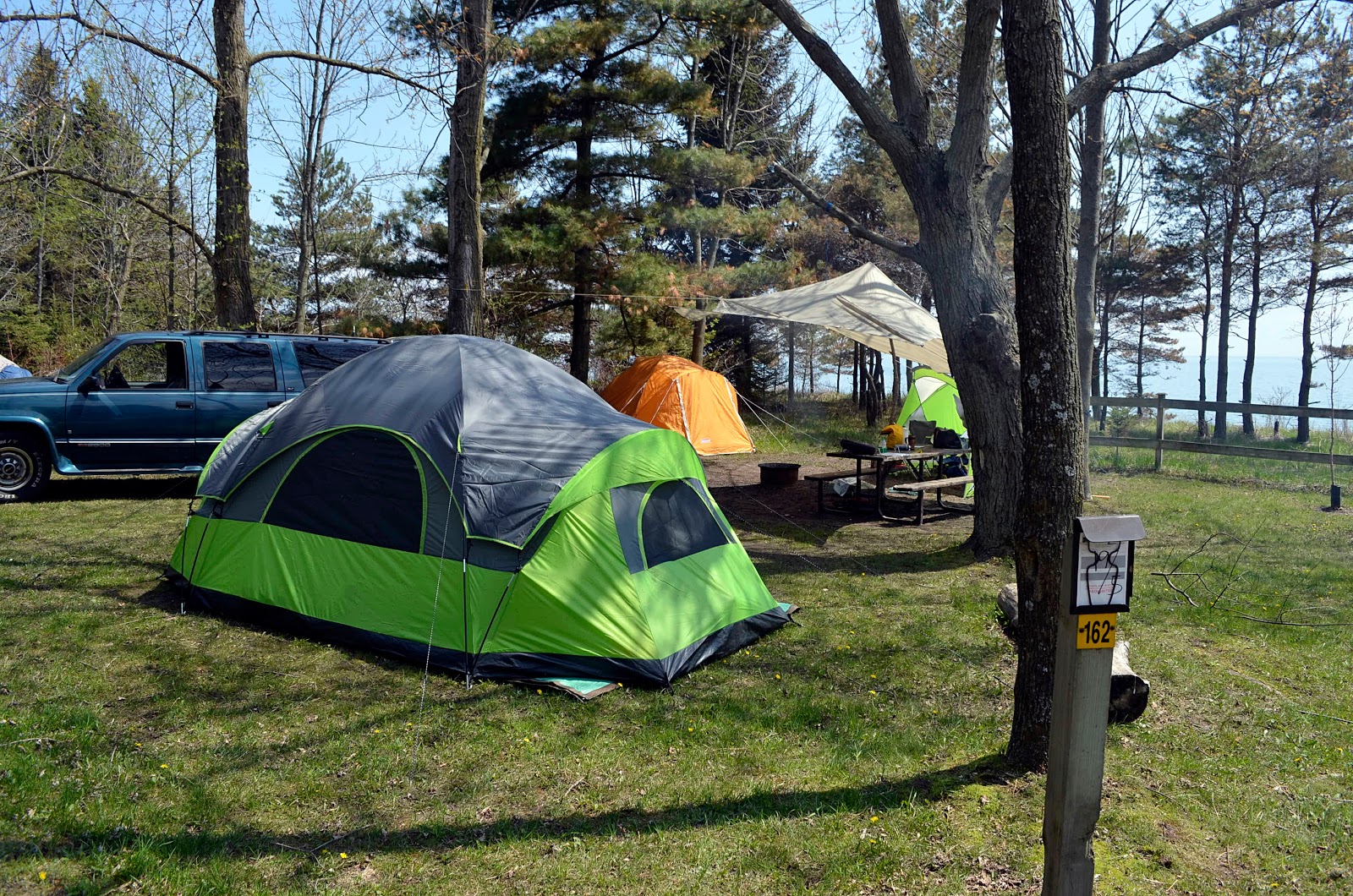 When we arrived at dinner time on Friday we wondered if the site was a wise choice. It was a mudpit. Standing water surrounded the fire pit. wet gooey mud covered most of the living area. Two islands were just big enough to set the tents on. I was worried that the truck would settle into the mud and we would have trouble getting out the next day. But being of hardy stock, we decided to soldier on, and we got camp set up before noshing on a dinner procured at SubWay.

Just prior to this trip, we noticed a "Beginner Camping Set" at Wal-Mart for a very reasonable price. For $100 the kit included a tent, sun shelter, 2 chairs, and carry bag. We scooped it up and decided that it would be our car camping kit. It worked nicely alongside our older gear, and we were actually quite surprised by the ease of setup and quality of the kit. In these pics, all the Wal-Mart stuff is lime green. 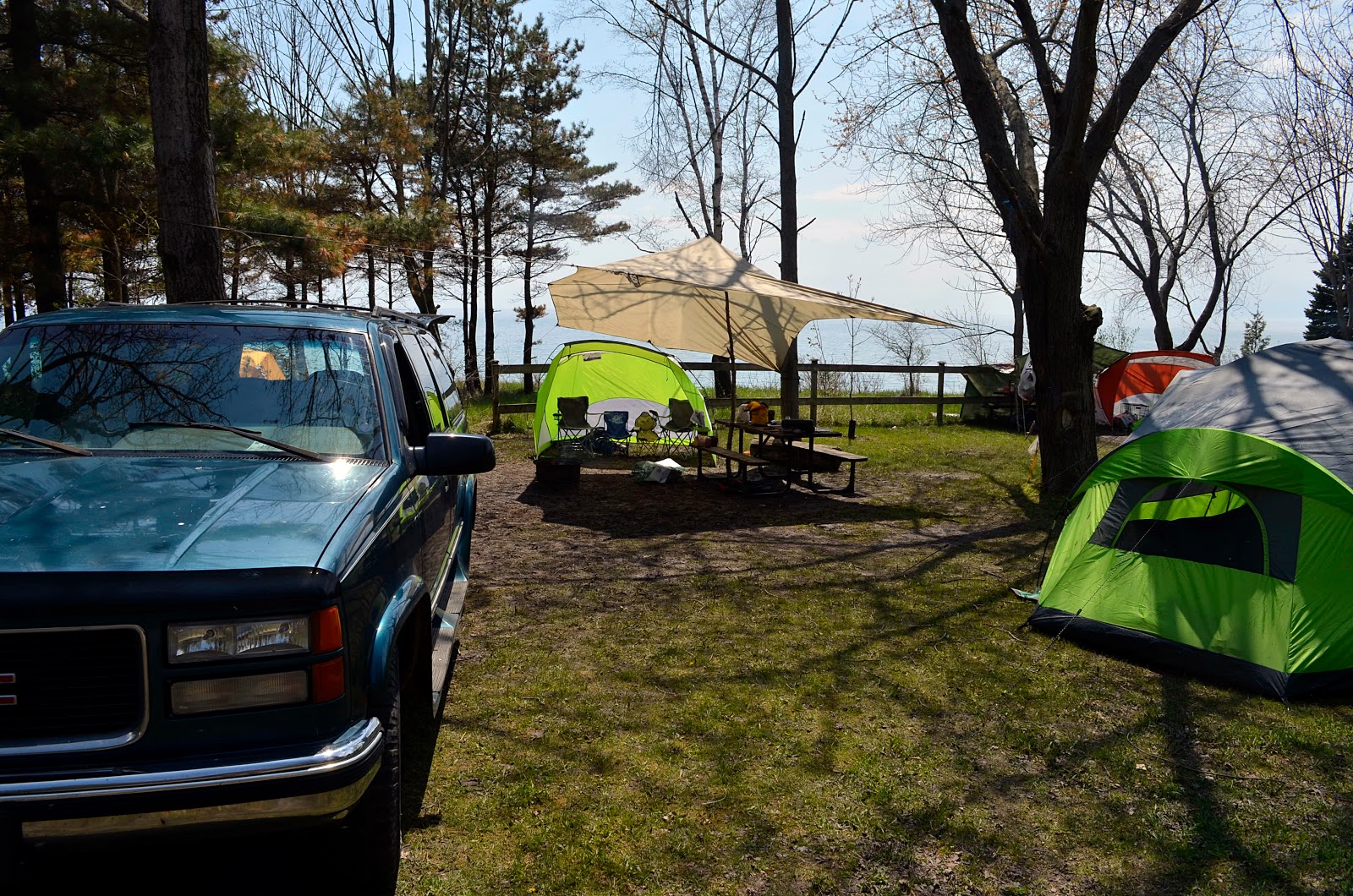 It quickly became obvious that quietude is a relative term. Not long after we got the tents up and fire started, our neighbours moved in. They faced similar issues with their site, and it was wide open to see them struggling to find dry land and get tents up. They were travelling with an older lady and younger kids, so we offered for the kids and Grandma to come and share our fire while their camp got set up. They declined and kept their distance. Night set in quickly, and after dinner and smores, we settled into bed.

It seems that CP Rail (maybe CN, or Via, or GO, or all of them - I'm not sure) has timed their schedule to wake campers in this park. Trains pass nearby throughout the day, but as night sets in, their whistles and the thunder of their wheels on the tracks become more frequent, and travel further. The sleepier you are, the more intense the noise of trains. This can't be overstated. Don't come to this park if you hate train noise. They are both constant and loud, but you get fair warning - you have to cross the tracks at the park entrance. We slept, but restlessly.

On Saturday morning, we awoke to the winds off Lake Ontario gaining intensity. I figured they were either blowing in sunshine or blowing in rain. Either way, with the camp already set, there was no point in complaining - and if things really went downhill, we were only 10 minutes from home. I started rigging our Ultralight ripstop nylon tarp - the good one that has seen us through canoe country and severe weather in strange places. My idea was that I would anchor the windward side of the tarp close to the ground, and the leeward side up high. That way we could shear off some of the wind. I would use the centre tie to go up to a tree limb in order to provide more headroom, and the whole thing would be a tarping work of beauty.

In the end, I couldn't get the centre up to a good branch, and had to use a pole - but the tarp still worked beautifully. Our neighbours enjoyed the show while I engineered the tarping solution. In the end the tarp did shear the wind, and adults stayed protected from the shoulders up while children suffered below. Ahhhh. camping.

We settled in under our tarp to a breakfast of Pancakes, and watched as the same hilarity began to unfold next door.

By now we had established a relationship with our neighbours, and we got to watch as they rigged their equally impressive windbreak. Their solution was to use the fence along the edge of the campsite as a frame on which to build a wall with a tarp. A small peak allowed them to tuck a picnic table in under the tarp, and before long they were snug in a little alcove, protected on three sides. As a piece-de-resistance, they incorporated a beach sun-shade into the design to allow for an expanded wind-free area. We quickly stole the idea, and now had a great system going. The kids became friends and before long we were sharing food and stories at both campsites. 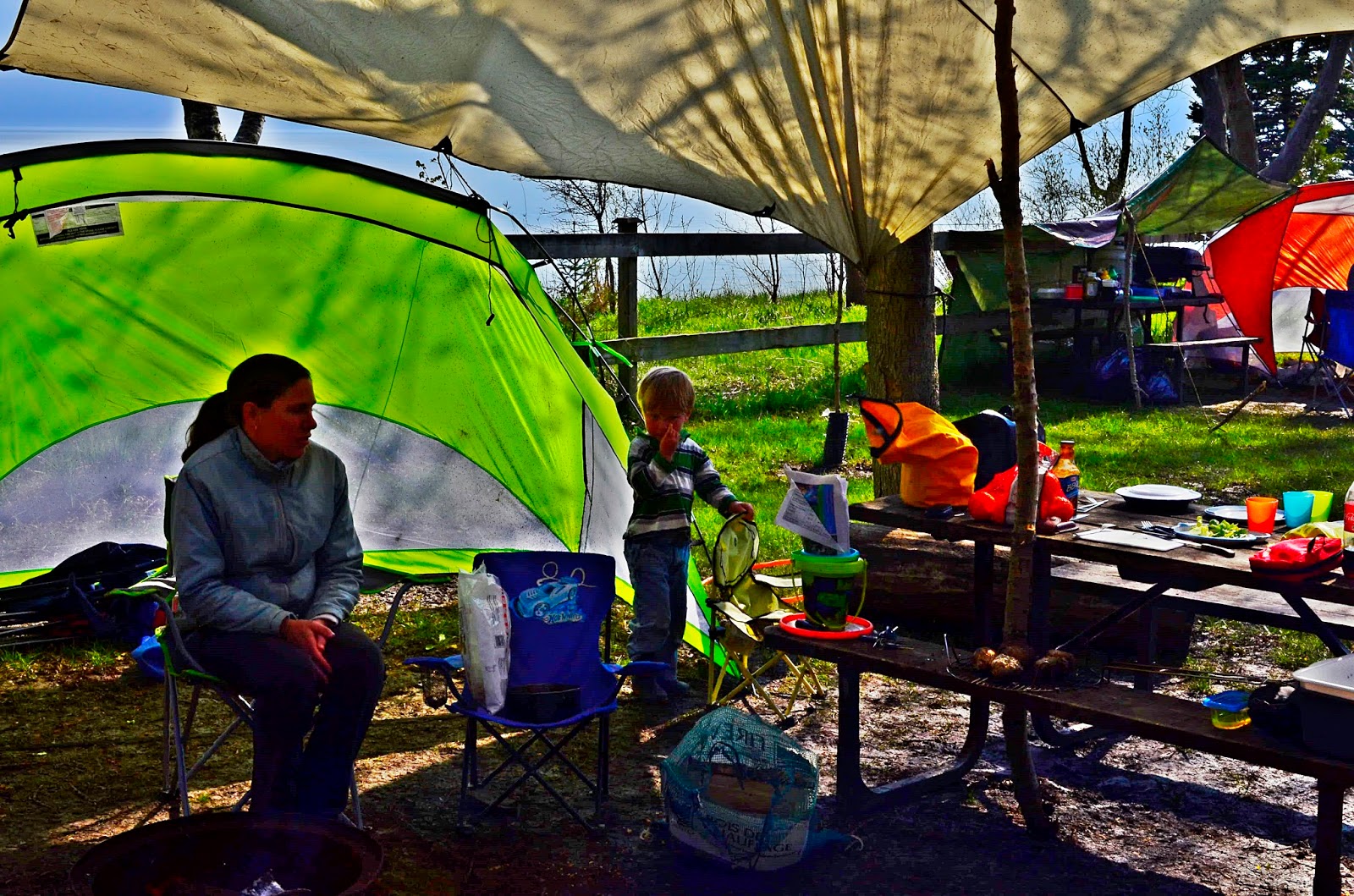 The great challenge in the 'urban plan' was that we had sacrificed the views from the site for better livability. It was a shame since the views really were fantastic - but if you angled yourself just so, you could still see down the shoreline to the lake below... 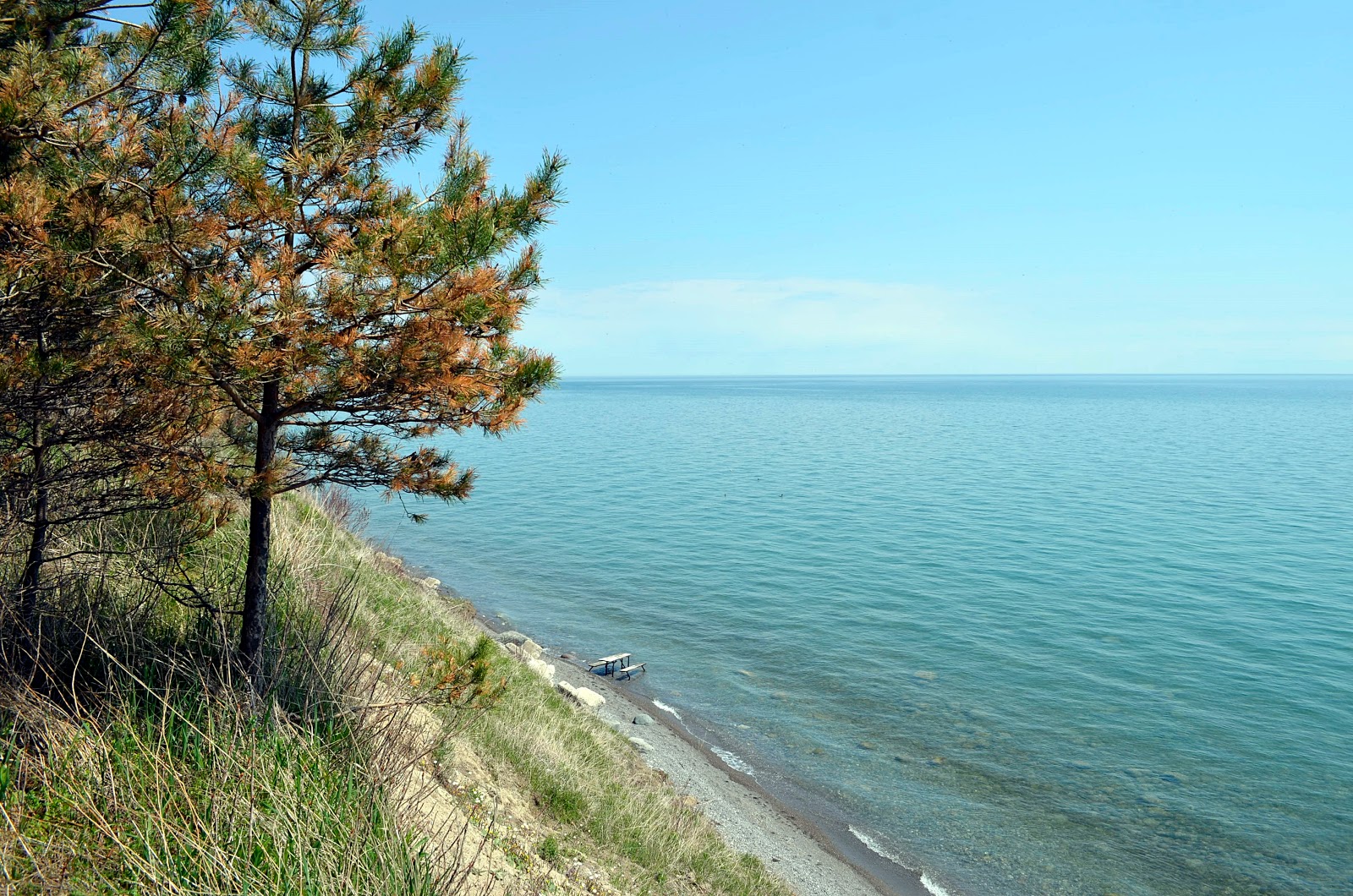 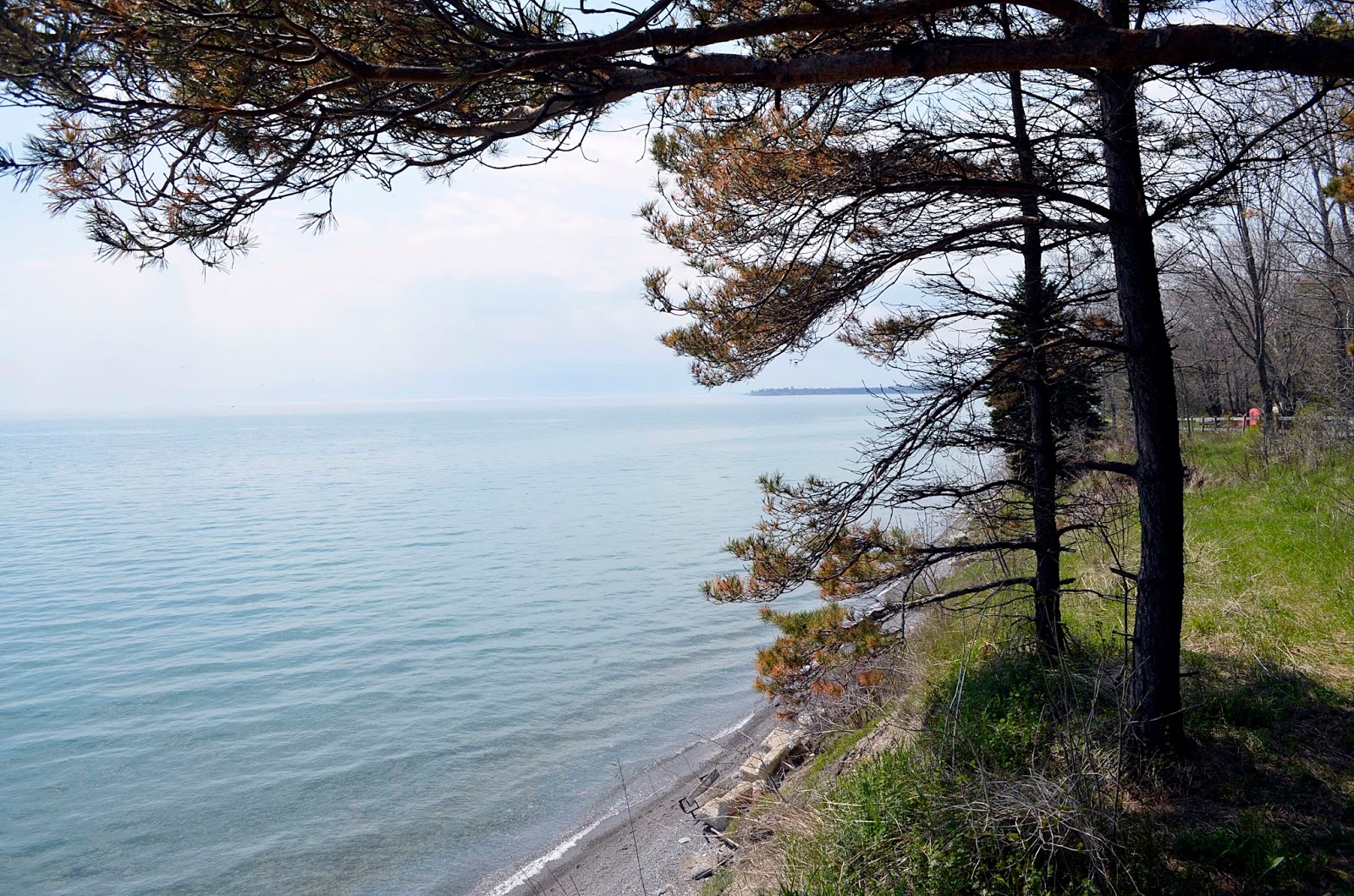 On Saturday night, the boys, Mom, and I went to a party at some friends house in town, leaving Chuck and her friend to fend for themselves. Unfortunately, the friend didn't feel well and called her Mom for a ride home. We had a great time at the party, eating and drinking, and drinking, and drinking, and that meant I didn't feel well in the morning. After voiding my stomach of its contents, I returned to bed while Mom and the kids went to the beach or on hikes, or something and finally around 1:00 PM on Sunday, I crawled out of the tent to a cheery 'Good Morning!!' from our neighbours.

About 5 minutes later Mom and the boys returned and we got on with our day... which mostly consisted of lazing around the fire and trading jokes with the neighbours. It was a beautiful day of sunshine and light breezes. A perfect camp day. Buddy found a log, and under it he caught worms and bugs, which he lovingly nursed to death. 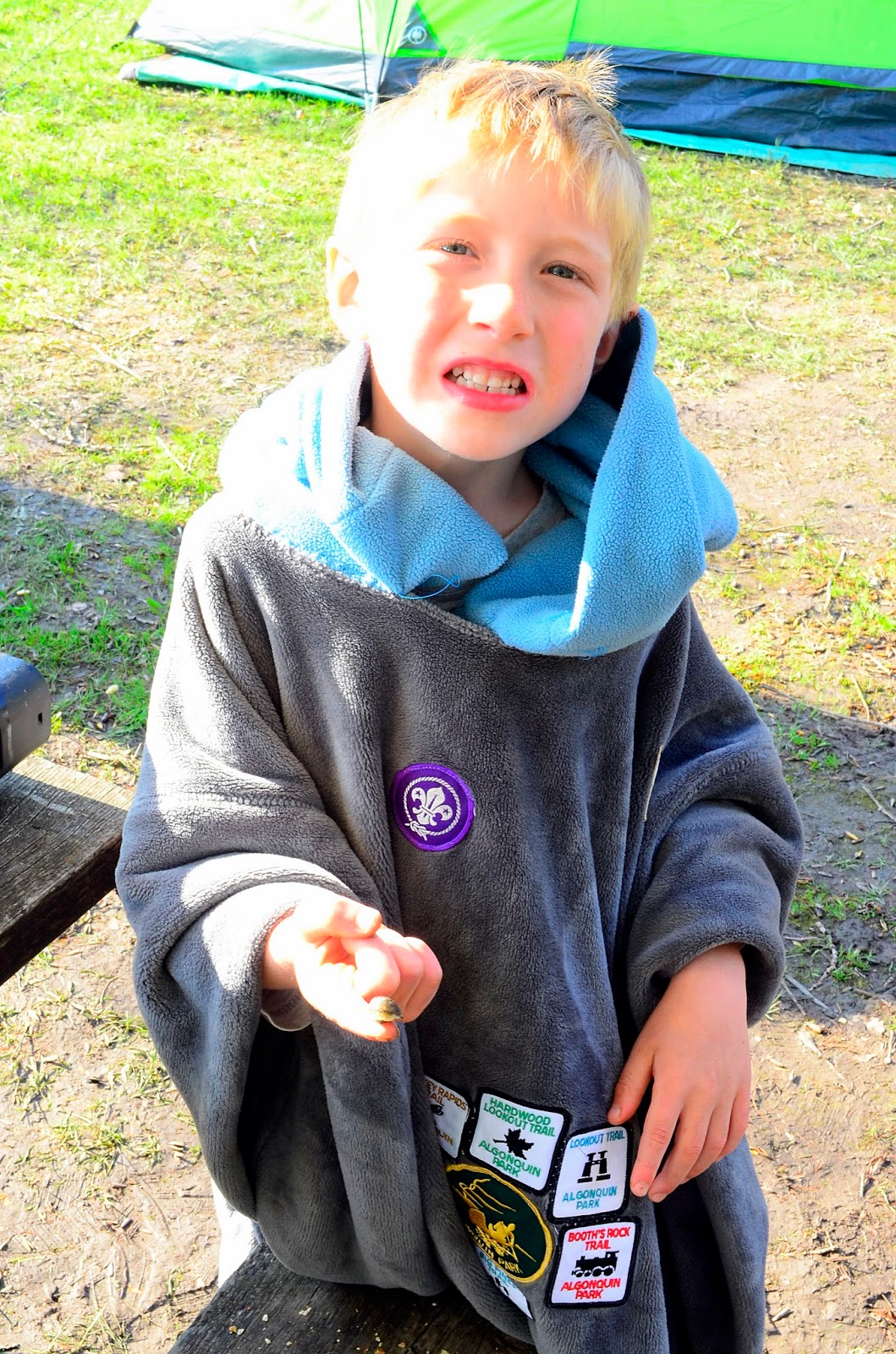 As dinner time approached, we made a trip to the camp store where we got a resupply of firewood ($7 per bag, $5 for kindling) and picked up a "Pizza Grill" which was immediately re-purposed as a general 'over the fire cooking device' and was used to prepare baked potatoes and chicken drums, while I made a salad on the picnic table. The chicken turned out amazing - 35% smoked, 65% grilled, 100% delicious. 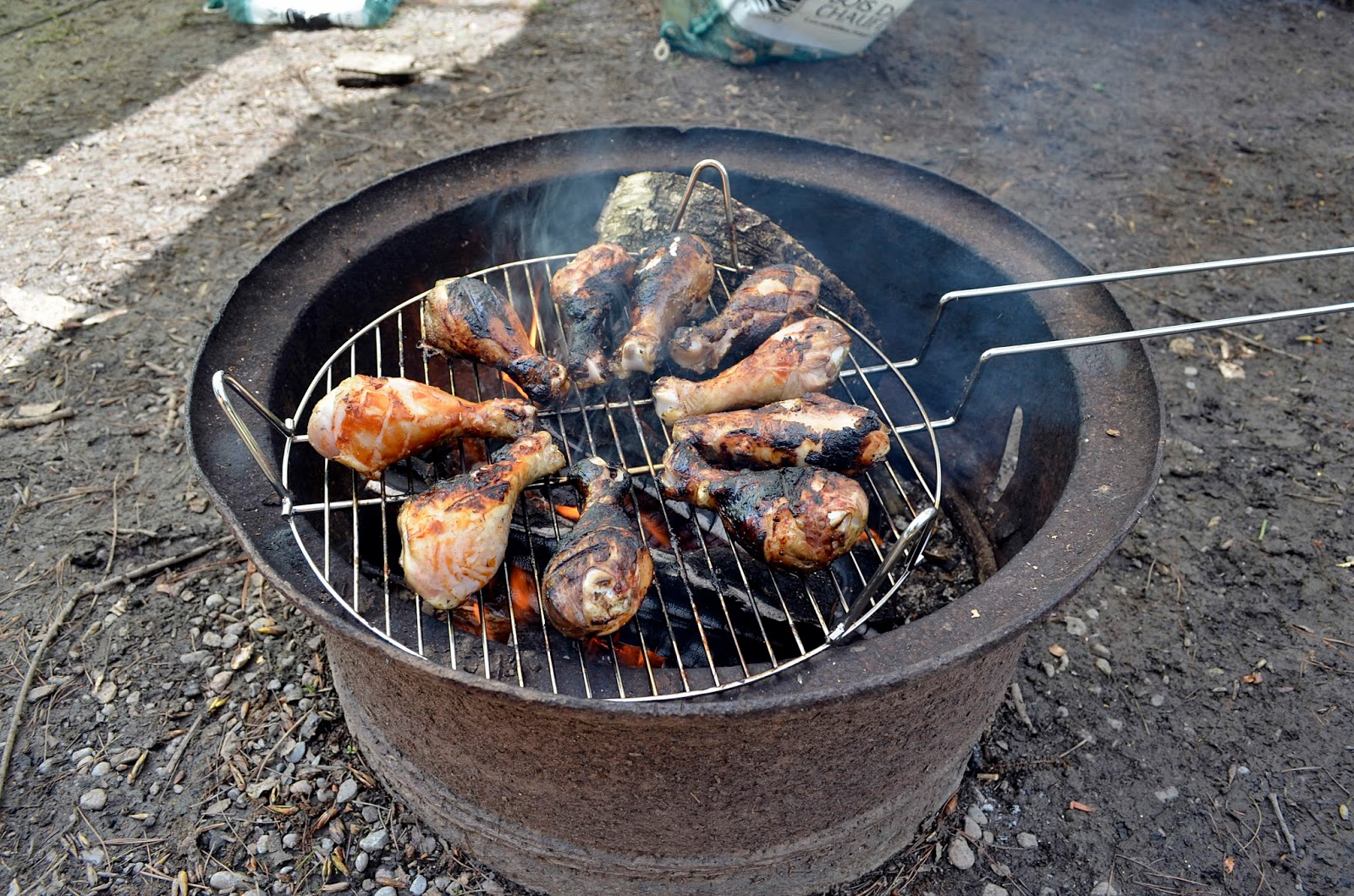 After dinner we joined the folks next door and told ghost stories around the campfire. They shared tales of the Banshee and haunted castles while I told of Camp X just down the beach, and the legend of La Chasse Gallerie from old Quebec. (If you don't know La Chasse gallerie - look it up, its a fun story.) Once the spooky stories were done, we headed to bed.

Monday Morning came in bright and beautiful. After a breakfast of bacon and scrambled eggs, we broke camp, then went for a walk along the waterfront trail and visited a bunch of the campground's beaches and picnic areas. We all agreed it would be a great place to visit again in the future! The picnic areas are huge and offer BBQ's and picnic tables, open grass and trees, shelters and playgrounds. Really a great spot for lunch with a crowd, a birthday party, or an event for a Scout Troop or Guide Unit.

With Darlington so very close to home, we will likely be back - maybe even just for a day trip. Its fantastic when you find these little gems and can remember them for future outings! 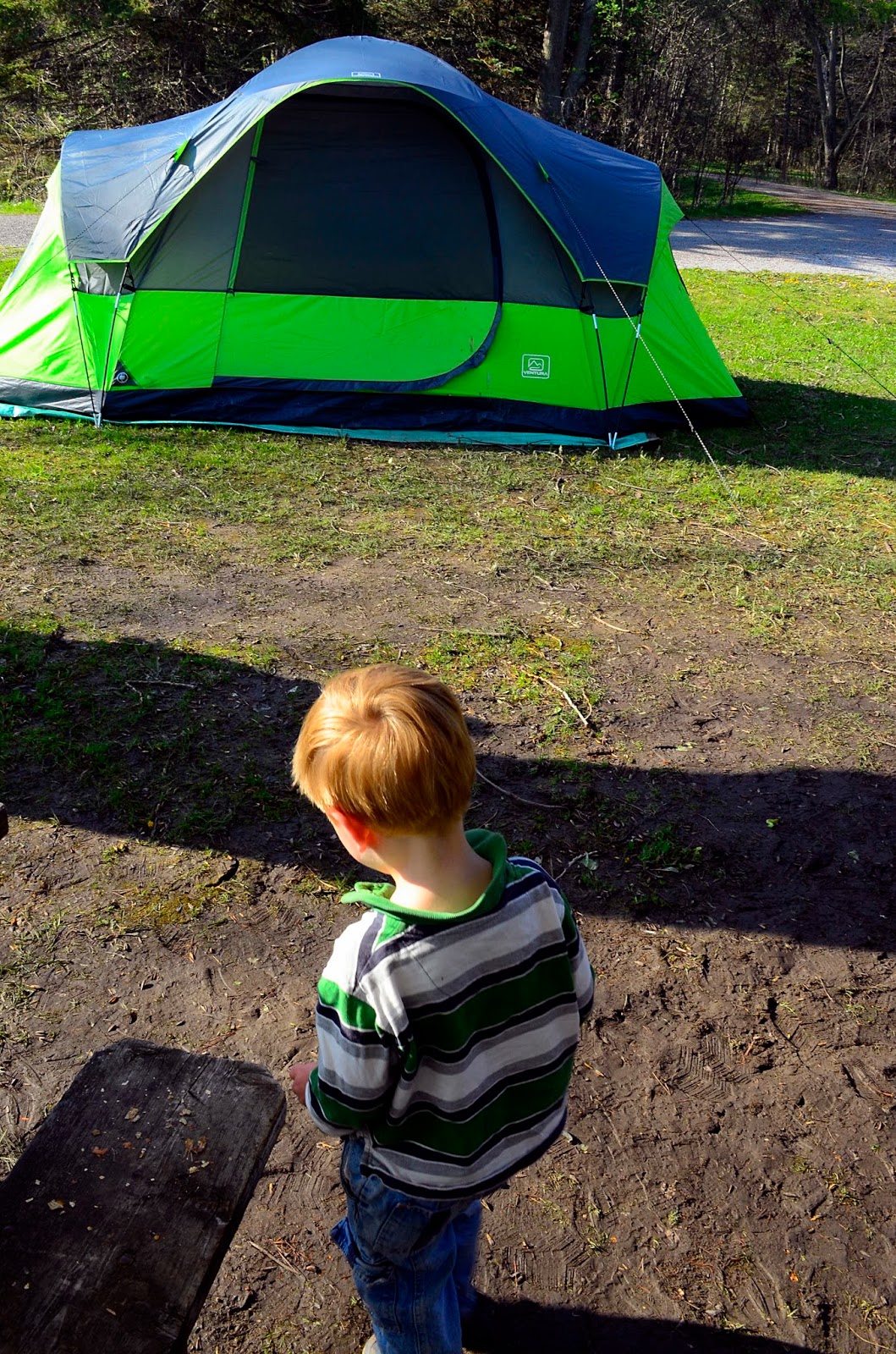 Posted by littleboatiris at Wednesday, May 21, 2014