As I said a few days ago, our apple trees have arrived for planting in our espalier. Now that they have sat out for a few days, the pressure is on to get them into the ground.

Being a manly man, I figured that I could do this in a day. Then I slept in. Then I had to go buy hardware. Then I had to go to the Rogers store for a cell phone and spent half a day standing in line. etc. In any case, it took me 2days to get a wire frame up that I will eventually attach bamboo growing frames to. Here is how I built the wire frame. 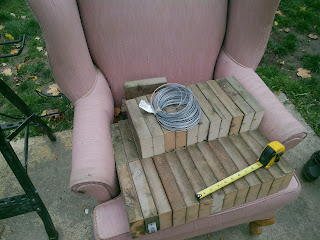 The first part of the project was building blocks to attach to the fence. These blocks will act as a stand-off to hold the espalier off the fence and allow even growth and airflow. Using my trusty compound mitre saw, I cut 2 blocks for each wire on each fencepost. Since this espalier will span 50 feet, I needed a lot of blocks. Eventually, Chuck would come outside and cut some blocks for me, but to get started I cut a bunch myself. For the records, each block is 8" long and cut from pressure treated 2X4's. 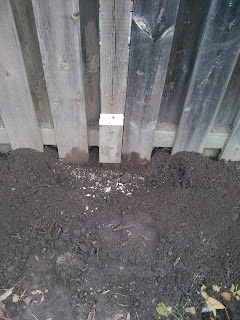 The blocks are attached to the fence with 2 5/8" X 6" lag bolts. I predrilled the blocks with a 1/4" drill while holding them in place. For this first block, I picked a fencepost at about the middle of the backyard, and judged about where I would want the wires to go to get a decent support up off the ground, but not too high. I marked the middle of the block as where I wanted a wire to go, and then measured up for the next wire at 16". Web sites I read on setting up an espalier suggested anything between 12" to 24" spacing on the wires, so I guessed that 16" would work for us. Only time will tell. 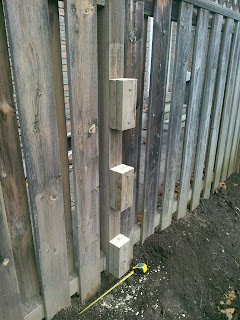 The vertical component is now in place. Three blocks on one post sets up the layout for the rest of the fence.

Step 3: Now you're stringing me a line! 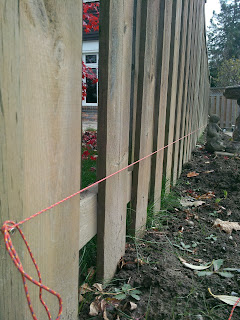 Using my lowest block as a guide, I stretched a string for the length of the fence as long as I could, then set a screw in the fence and tied the string off on it. It is important to use a lightweight line here, and to pull it tight enough that there is no sag in the string. Then, using a long level (longer is better) check if the string is straight. In our yard, some fence posts had settled, and some had leaned in or out, so just measuring down from the top of a fence post would not have given a straight line. Similarly, the ground is uneven, so you would not get a level line measuring up from the ground. Take your time and really make sure that this line is straight. In my case, I was able to get the line straight, but I did not compensate for lean in the fence. 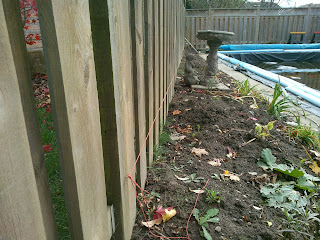 I can almost guarantee that the line will not be level on your first attempt, but you will have a good guess of how far off it is. If you have a helper, it will really speed this step up. Have them hold the level while you move the string up and down to get a closer estimate of where level is for your second attempt. then set the line and try again. It took three tries before I got the string level.

Step 4: New Blocks on the Block 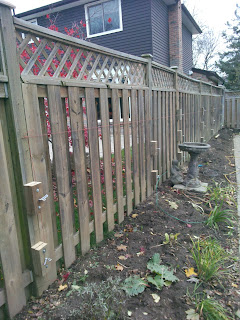 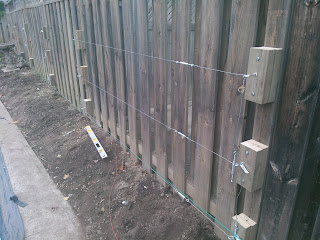 With all the blocks and eyebolts in place, its time to set the wires that will make the frame for the espalier's forms to be built on. While your daughter and au pair are watching a movie, bring them a spool of wire and about 2 dozen turnbuckles. Your daughter will be able to twist the wire on to the turnbuckles and the au pair can extend the turnbuckles to their maximum length.

Back outside, attach each wire to an eyebolt and tighten (shorten) the turnbuckles to tension the wires. You need the wires tight enough to give a good "thwongggggg" when you pluck them. If you over tighten the wires, they will break. About halfway through this stage, I ran out of wire and had to get more. The new stuff I got was coated in green plastic, and blends into the fence much more nicely than the steel wire you see here.  Eventually the trees will not need these wires, but your installation has to be good enough to last the first 5 years or so.

I don't have a pic, but I repeated these wires for each section of fence until I had 3 parallel wires running all the way across the backyard. With the wires in place, and the weekend done, it is now time to begin setting the bamboo forms in place. I'll save that for Site prep Part 2.
Posted by littleboatiris at Tuesday, November 06, 2012