Most of this week its been too cold in the garage to work on the number line, and as I alluded to in a previous post, I am currently wrestling with the Router to make the main part of the project work, but while all that is going on, I have been working fairly steadily on peripheral bits that are still critical, although less sexy than the main event. I'll cover those off for now, and hope to get back to actual progress as the week goes on. I hope to have this wrapped up by next weekend - if the router is willing.

The first small thing was some shopping. I hit the local craft store (Michael's) and bought a sheet of magnetic stuff. I'm not sure what its official name is. I think its peel & stick magnetic backing  or something like that <EDIT - lookit that, in the pic it says "Magnetic Adhesive Sheet!">. Anyways, it was a little more expensive than I expected, but I really wanted to make my weather icons magnetic, so I was cool with paying for it. While there, I also picked up some die-cut wooden figures that can help to round out my weather symbol collection and add a little variety.

After sticking the icons to the magnetic stuff, I just trimmed away the extra with an exacto knife, and presto-chango, my icons became magnets. I could post pics of that, but really, the magnets look the same as the icons, so whats the point!

For my next task, I went shopping again. This time I took Cuppa to Metals plus and bought a 46" X 7" piece of 20 gauge sheet metal. This piece of steel will become a blackboard above the numberline. Using the blackboard, we can attach the weather icons and write challenge questions of the kids to do.

The sheet metal came with a thin layer of oil on it, so I spent about an hour using a variety of thinners and strippers to try and get the oil off. Once it looked clean, I sanded the metal to rough it up a little, then using one of the dozens of chalkboard paint recipes found online I set to painting the metal.

Most of the recipes suggest using regular old paint (some say oil-based, others say latex) and adding unsanded grout to give the chalk a surface to bite into when the chalkboard is set to use. I found an old can of brown exterior latex (used to paint the aluminium trim on our house) and an old box of grout in the basement, and got ready to paint. The lid was so hard to get off the paint can that it actually stretched the metal and tore the steel can. I have no idea how long it has sat in the basement. The grout was still in good shape.

Most of the online recipes called for 1 tablespoon of grout to a cup of paint, so I did basically that, using an old tupperware as my mixing bowl. I applied the paint, waited a few hours, and then did a second coat. Then I sat and watched as the Montreal Canadiens pants the Toronto Maple Leafs in overtime. Go Habs!

With the game done, I checked back in on the paint. I loved the colour of the brown paint, and thought it would look really good as my chalkboard. Then I noticed that it was bubbling around the larger pieces of grout. I picked at one of the bubbles, and the paint lifted away from the steel. Rubbing a piece of chalk across resulted in big shiny windows where the paint lifted away. I took out a scraper, and in under a minute had the whole piece of steel stripped back to its virgin state. None of the paint had stuck.

That failure could have been due to old paint, the oil on the steel, or because I was too early for the paint to have cured properly, but either way, I was starting over.

Going back to my paint shelf, I found a can of Tremclad rust paint that I know is about 2 years old. I popped it open, and without applying the chalkboard recipe, painted the steel with straightup black paint. It was a little streaky since I had brushed the paint on, but I didn't worry about that, I would apply a second coat in the morning if the paint stuck. If it didn't stick, I would be back to square one anyways.

This morning I checked on the paint, and it was all hills and valleys with a bright sheen to it. I took some sandpaper to the paint to rough it up a little, and found that the paint was easily sanded back to flat, which stripped it of its sheen. Also the paint was securely cured to the steel. I got out the grout again, and painted on a second coat, this time using the chalkboard paint recipe, and giving it a finishing pass with a roller to take away any 'hills and valleys' effect. Tomorrow I will be able to know for sure whether the rust paint has been a success. In the meantime, its fingers crossed! 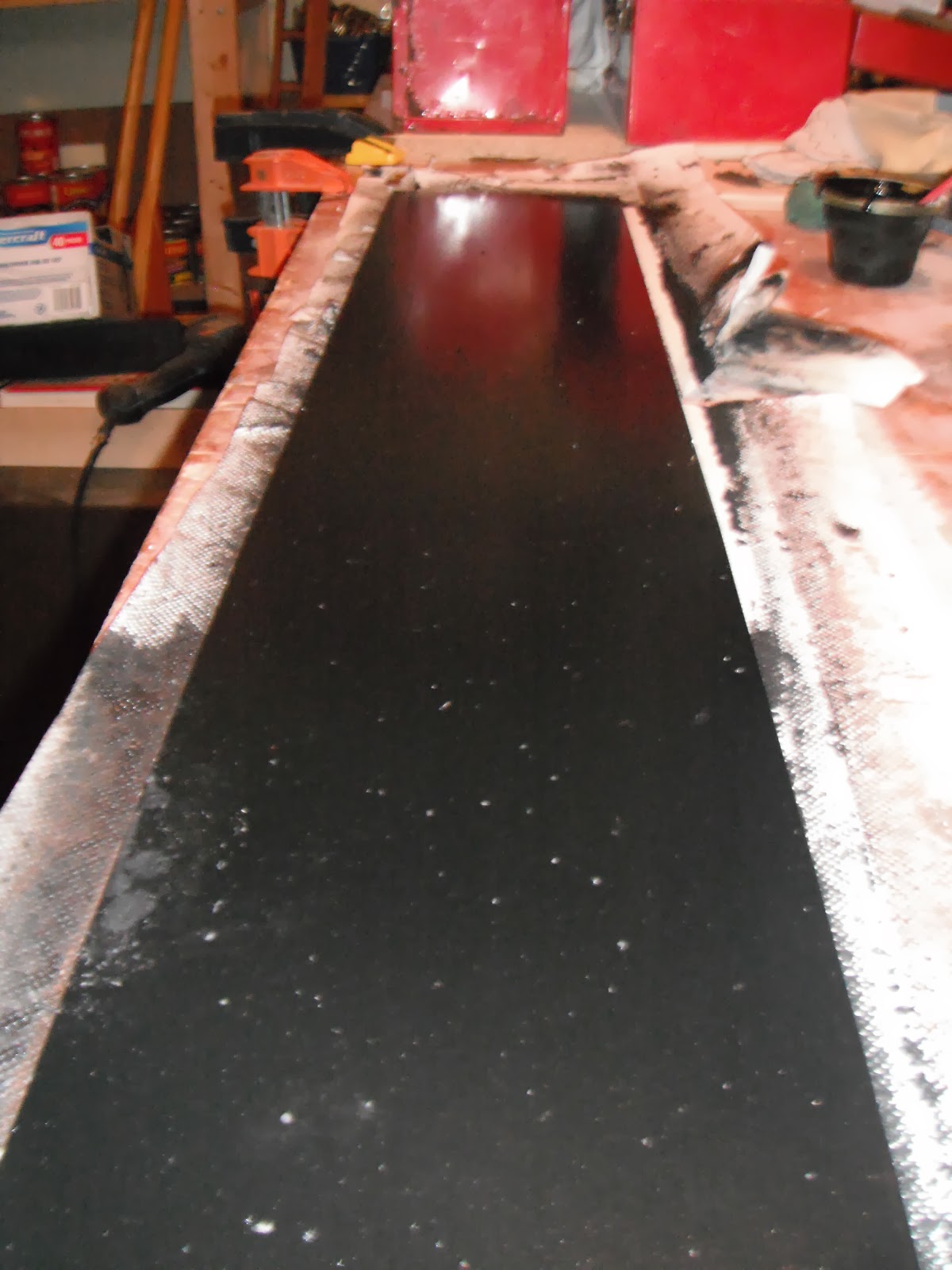 With a little luck, I'll get out to the garage to work on the rail some more tonight.
Posted by littleboatiris at Sunday, March 02, 2014