This is part 2 of a series of posts. Please find part 1 here!

Monday morning dawned bright and early , and after a quick breakfast (Burger King, you make yummy french toast sticks!) we headed to the cruise port. The bellhop loaded a mini-van taxi with all our stuff, Momma strapped in the two car seats, and a 15 minute drive took us to the docks.

We were met at Carnival's cruise terminal by a flurry of activity. Couples, families, porters buses, taxis, limos bicycles, everything and everyone seemed to be going pell-mell everyplace and everywhere. A porter ran to our taxi, claimed it as his own, promised to treat our luggage right, asked us to "show him some love" and set to loading up our stuff while we corralled kids and rounded up our carry-ons.

About 2 weeks before the cruise, I had decided to opt into Carnival's "Faster to the Fun" (FTTF) package, which means that for $50, your family gets to jump the lines all the way through the boarding procedure. It turns out that this was a good investment. At security, we were pushed to the front of the line. Same at check-in, and so about 15 minutes after stepping out of the cab, we were checked in and ready to board, sitting in the terminal. Maybe the only passable family picture of the entire trip was taken at that moment...

Since Buddy wasn't having the time of his life, we went for a hike around the terminal. On our way back, preboarding was announced for VIP guests and platinum/gold level cruisers. Moments later it was FTTF pass holders, and since that was us, off we went. Another security check, an elevator ride, across the boarding ramp, and we were on the boat.

One of the perks offered in the FTTF pass was that our room would be ready before we boarded, so no waiting around above decks, and our bags would reach our room early. This mattered to us so we could get our swimsuits and go play. Our room was ready, and it was nice. We went and ditched all our carry on stuff right away, but our bags didn't reach us until much later in the afternoon.

Oh well, no use complaining. We went and had lunch. While lunching we tried for another family photo...

The elusive family photo was quickly becoming a theme on the trip. That last one is passable, I guess.

Lunch at the lido buffet (where we went) was mostly fried foods, and our boys don't really groove to the deep fryer. Besides, we'd had fried stuff for breakfast as well as for dinner the night before. They were starting to think America was one big deep fryer. Once we got them to choke down most of their food, Cuppa and I headed over to the pool and started wading around its edge. He found the fountain particularly mystifying. As the ship gently rocked, the waterfall would switch from the port to starboard side of the fountain. 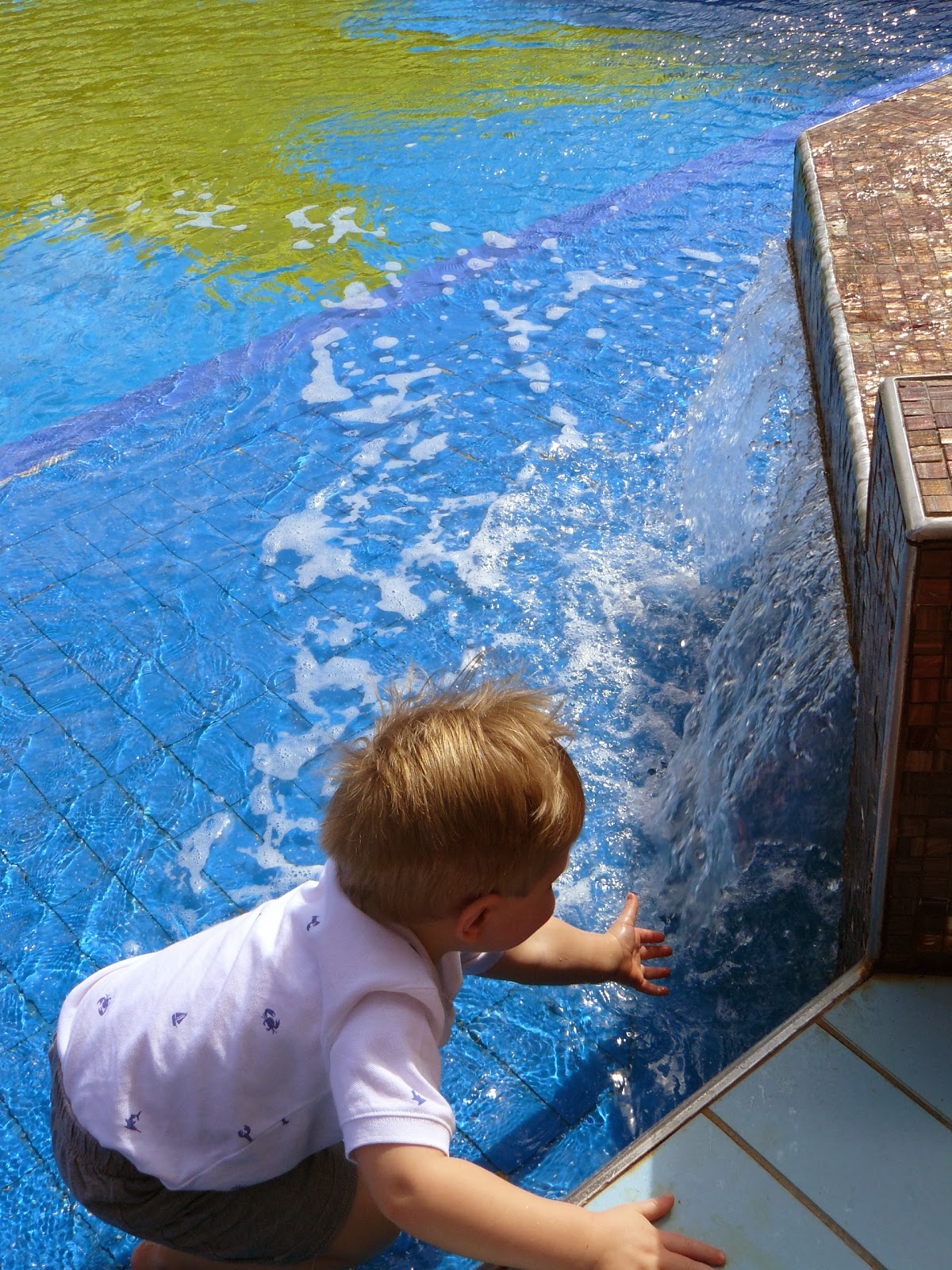 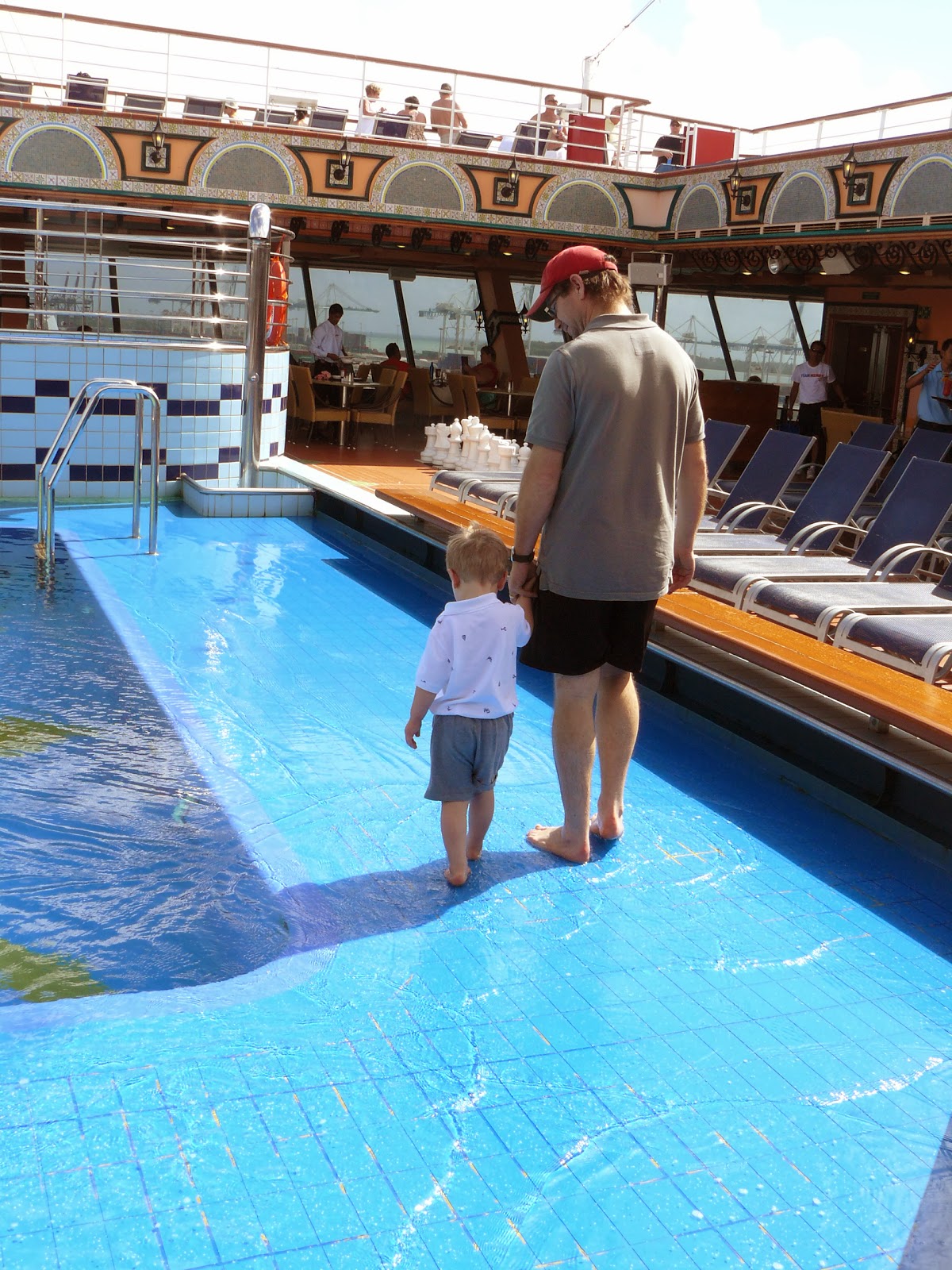 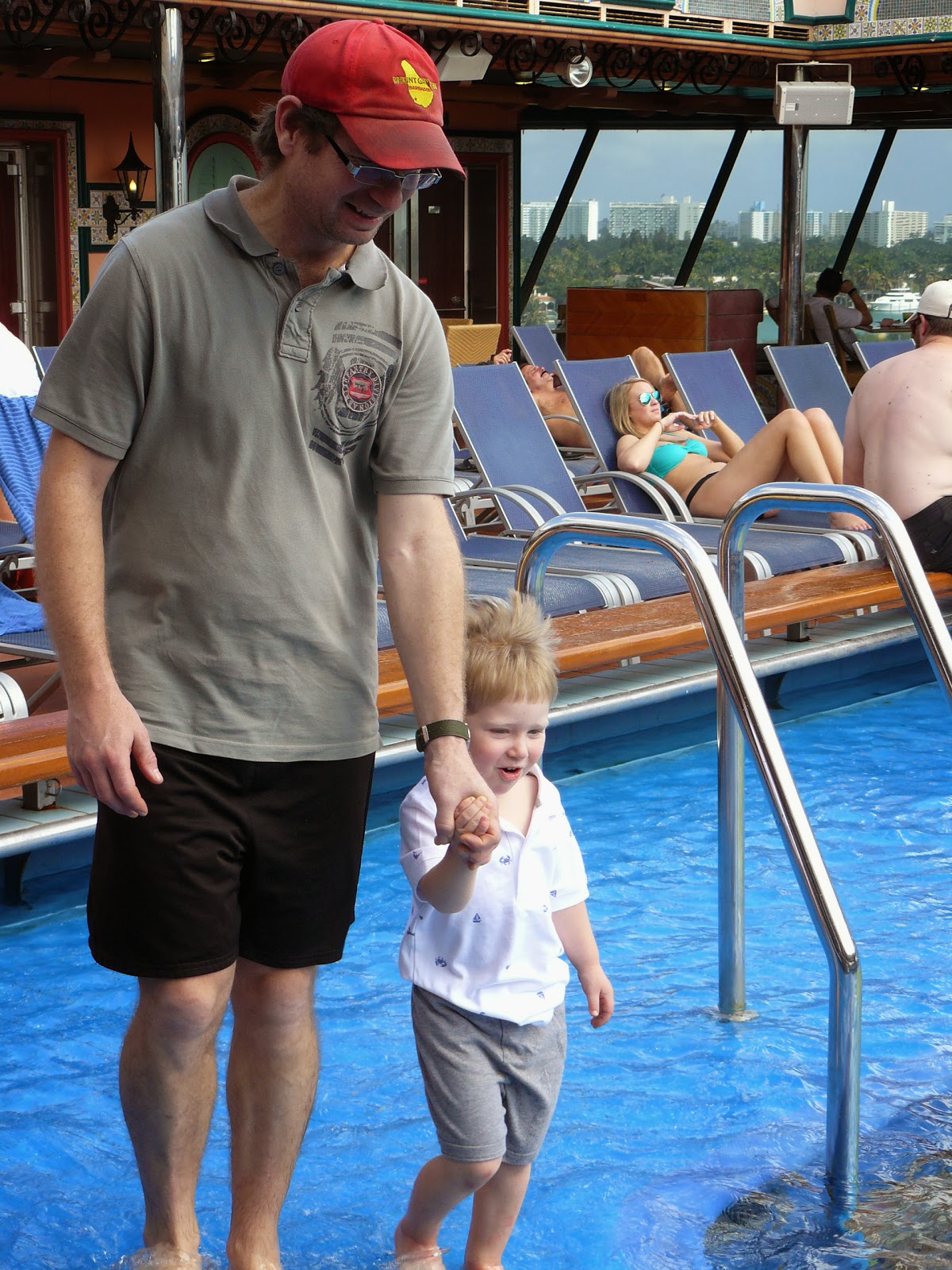 Before long, Buddy declared his dinner done, and he rushed over to join in. The two of them were happy to have this great splash pad, but I had to be vigilant to be sure they didn't go in the deep water! 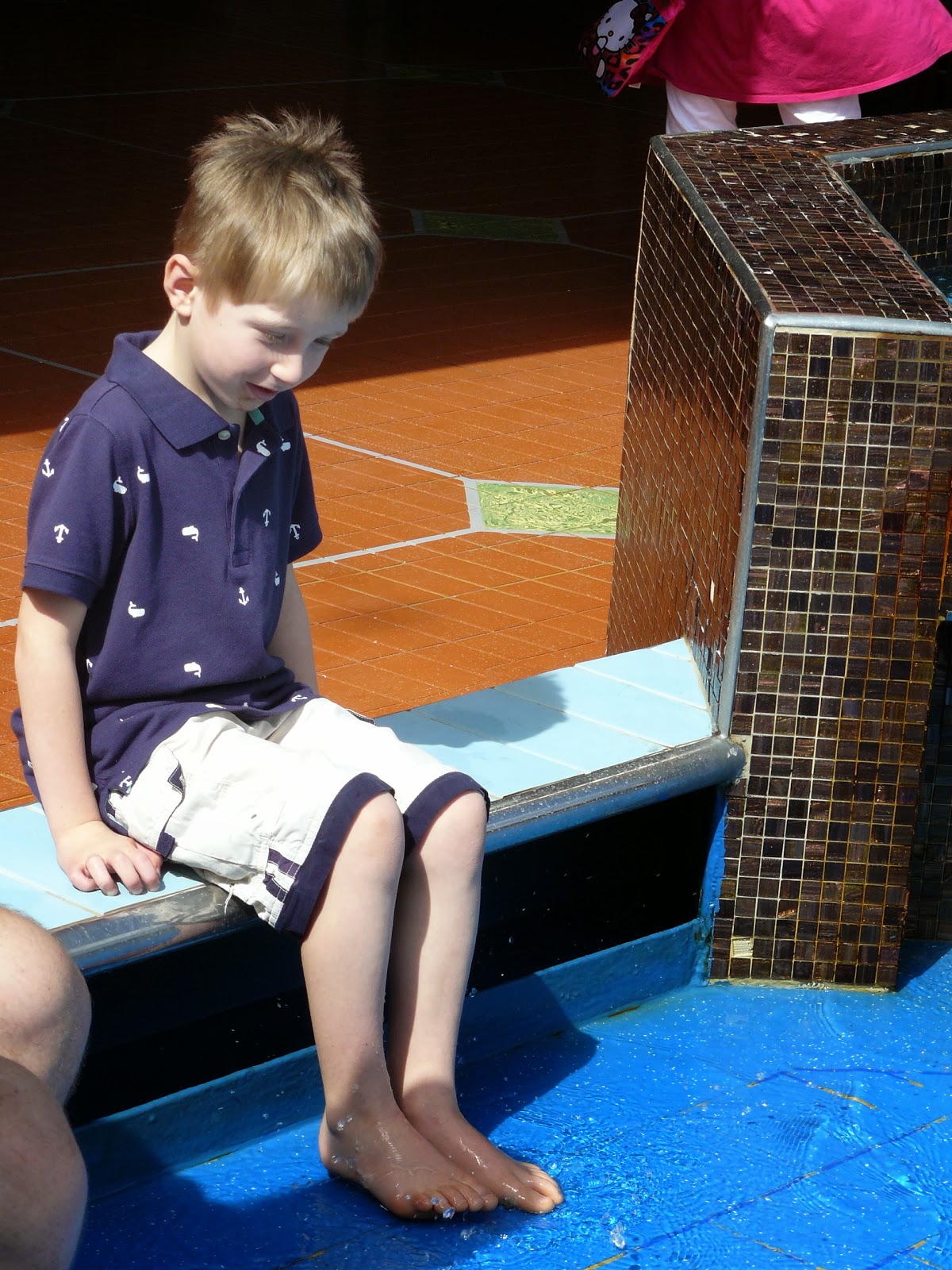 After a little while, the captain tooted the horn, and Carnival Victory left the dock. As we went, Momma started snapping photos of Miami as we passed by. It looked beautiful. 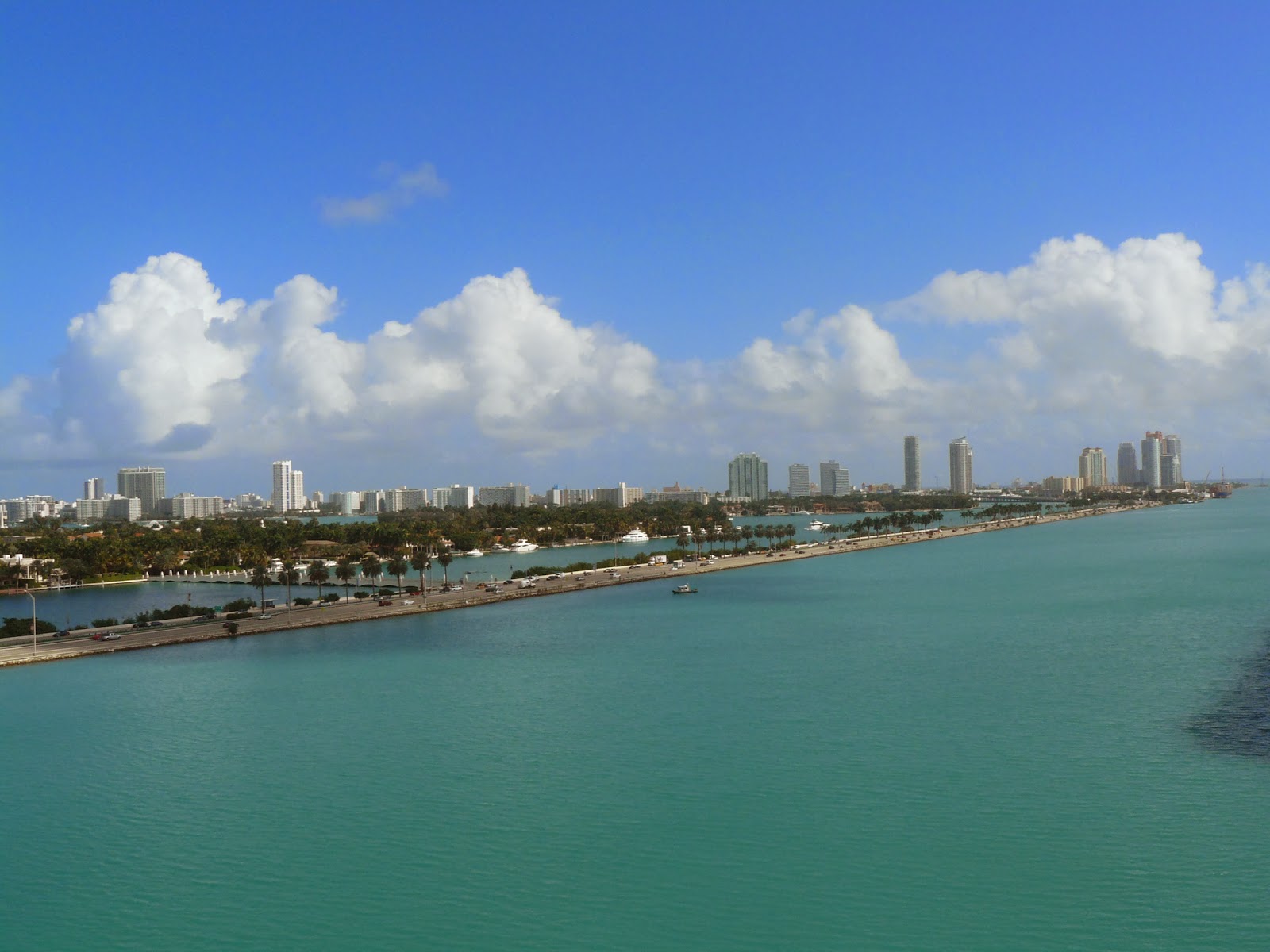 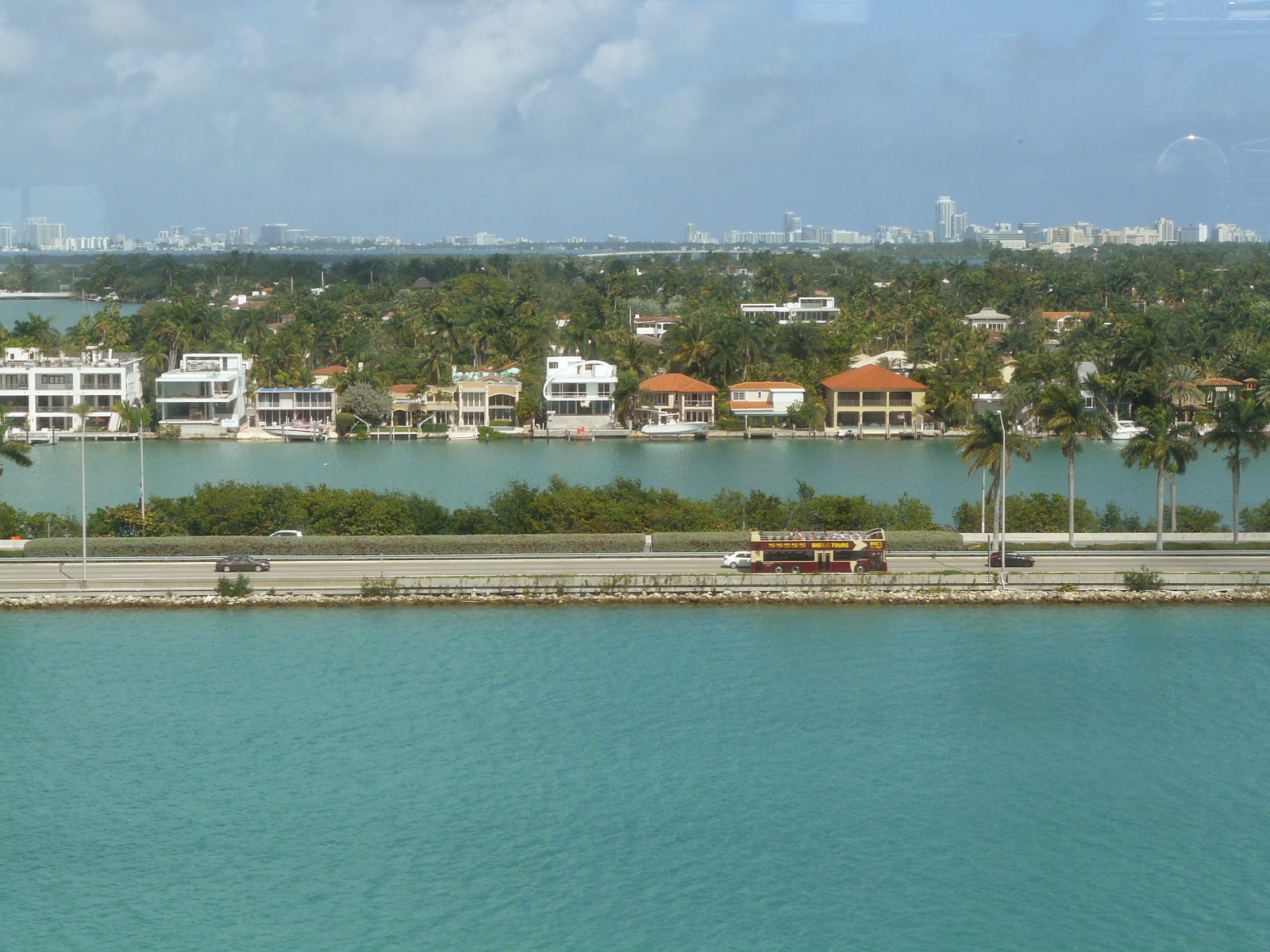 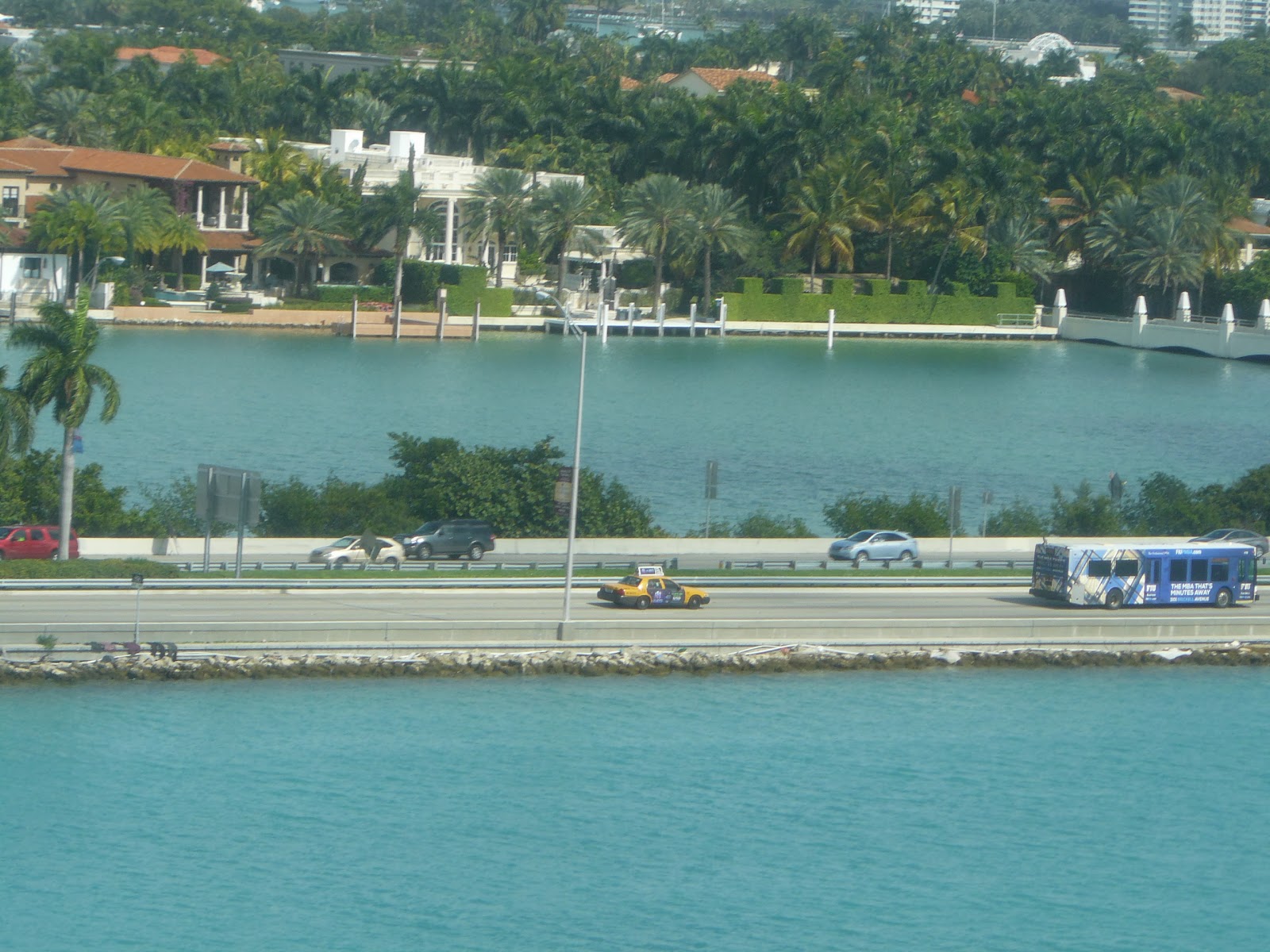 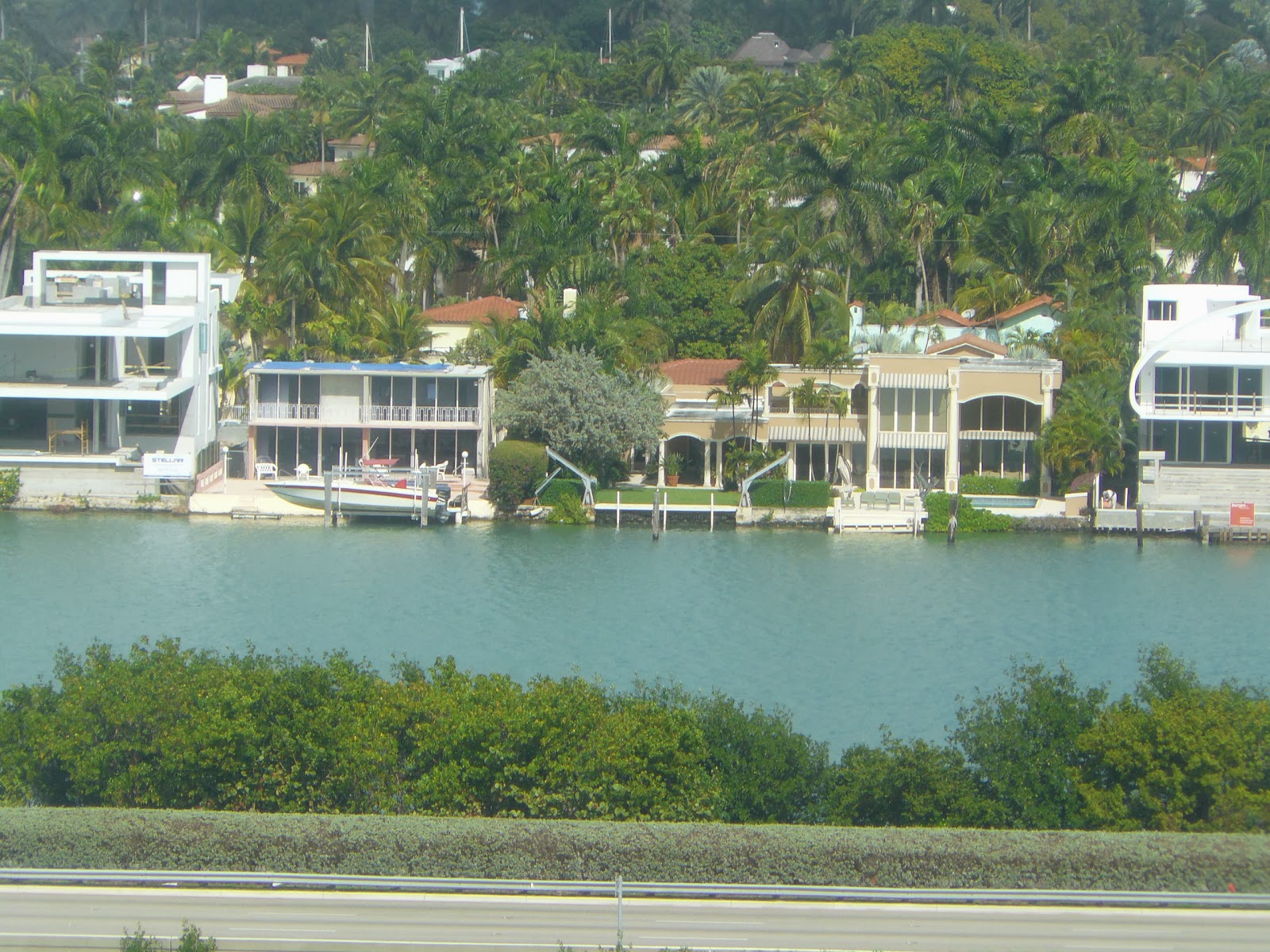 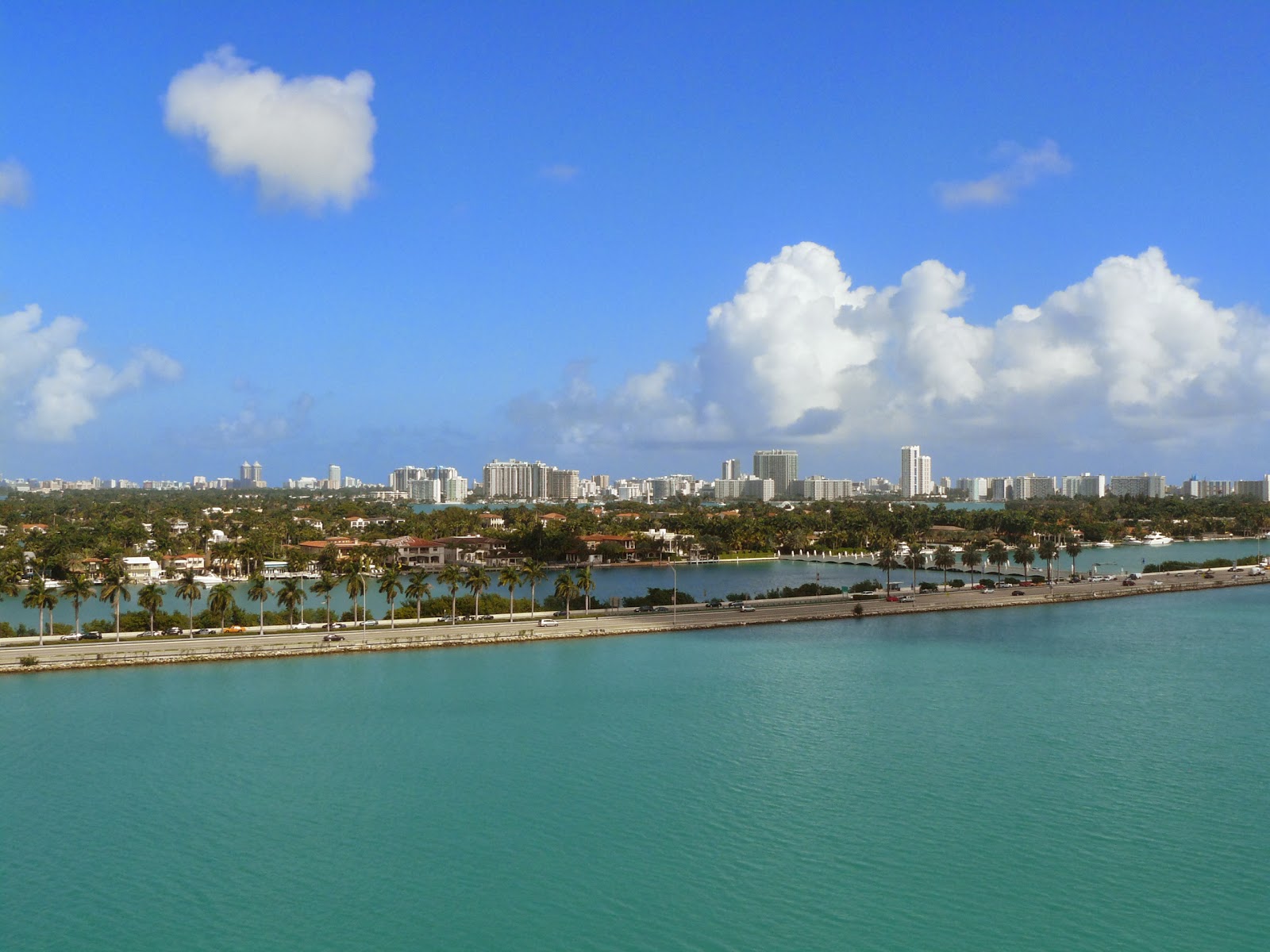 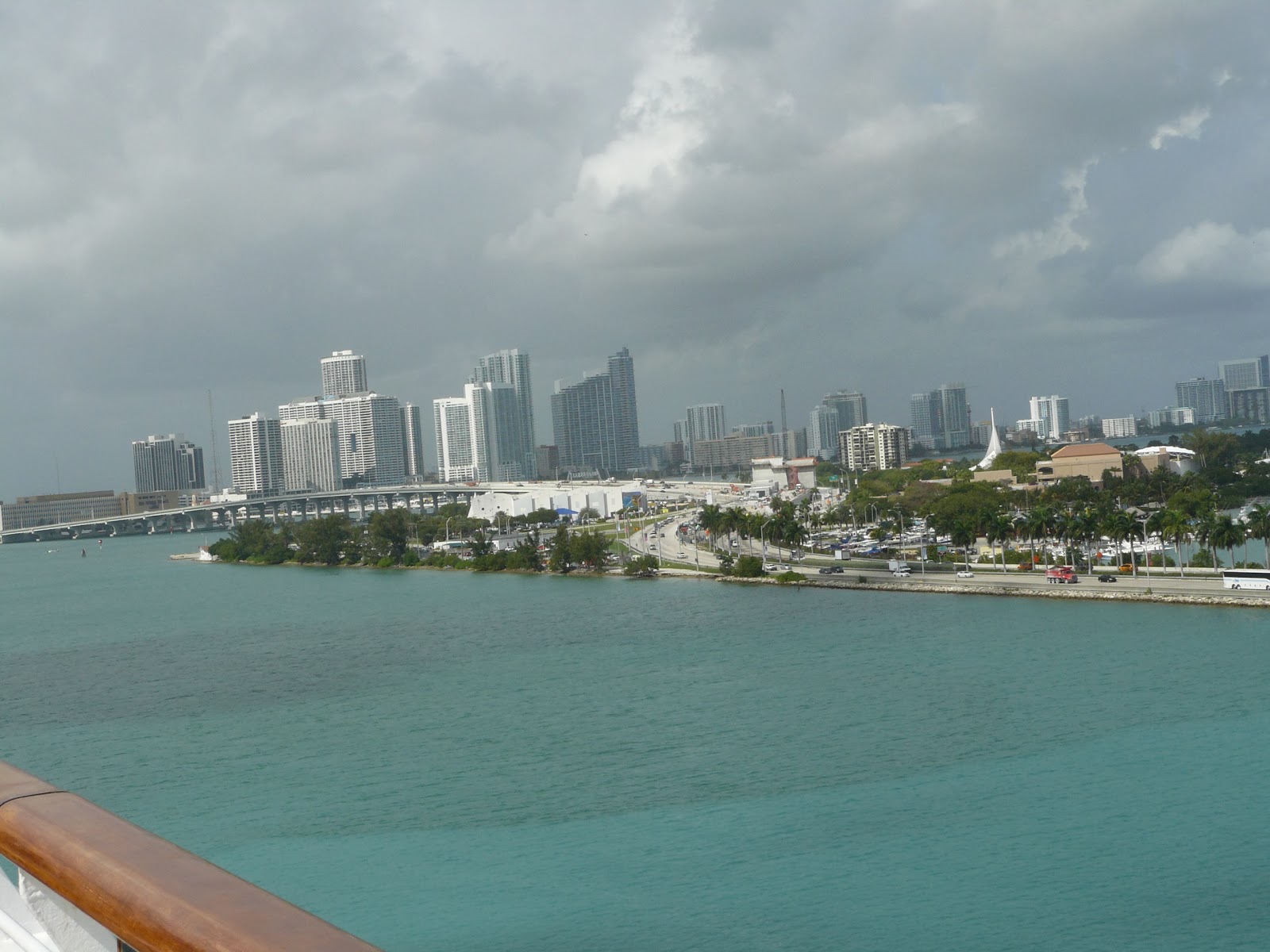 Before long we were off to sea. For a long time we chased other cruise ships leaving Miami. The boys were really interested in the other boats and things we saw along the shore. It was a perfect sailaway with no hiccups.

Once we got tired of the pool, we took the boys to visit the Carnival Kids Club, and Chuck to visit Club O2. The kids club is essentially a floating Daycare with a panoramic view of the water. It is way up at the front of the boat, and likely has the best views of any room on the whole boat. The boys L-O-V-E loved it. They made crafts and painted, sang songs and watched movies, and just had a great time. On our sea days, we checked them in as soon as it opened (10:00 AM) and left them until lunch. After lunch they would beg to return, and would spend most of the afternoon there.

Chuck liked the O2 teen club a lot too. She made a bunch of friends there from around the world and we hardly saw her after breakfast until dinner, and again until about midnight. We threw away rules and curfews for the cruise and stuck our heads in the sand. Chuck had a helluva time. I don't want to know anything more than that.

By the time we were done exploring the boat and signing everyone up for their clubs, it was dinner and bedtime. We returned to our room to find our luggage (Yay!) and a new friend... 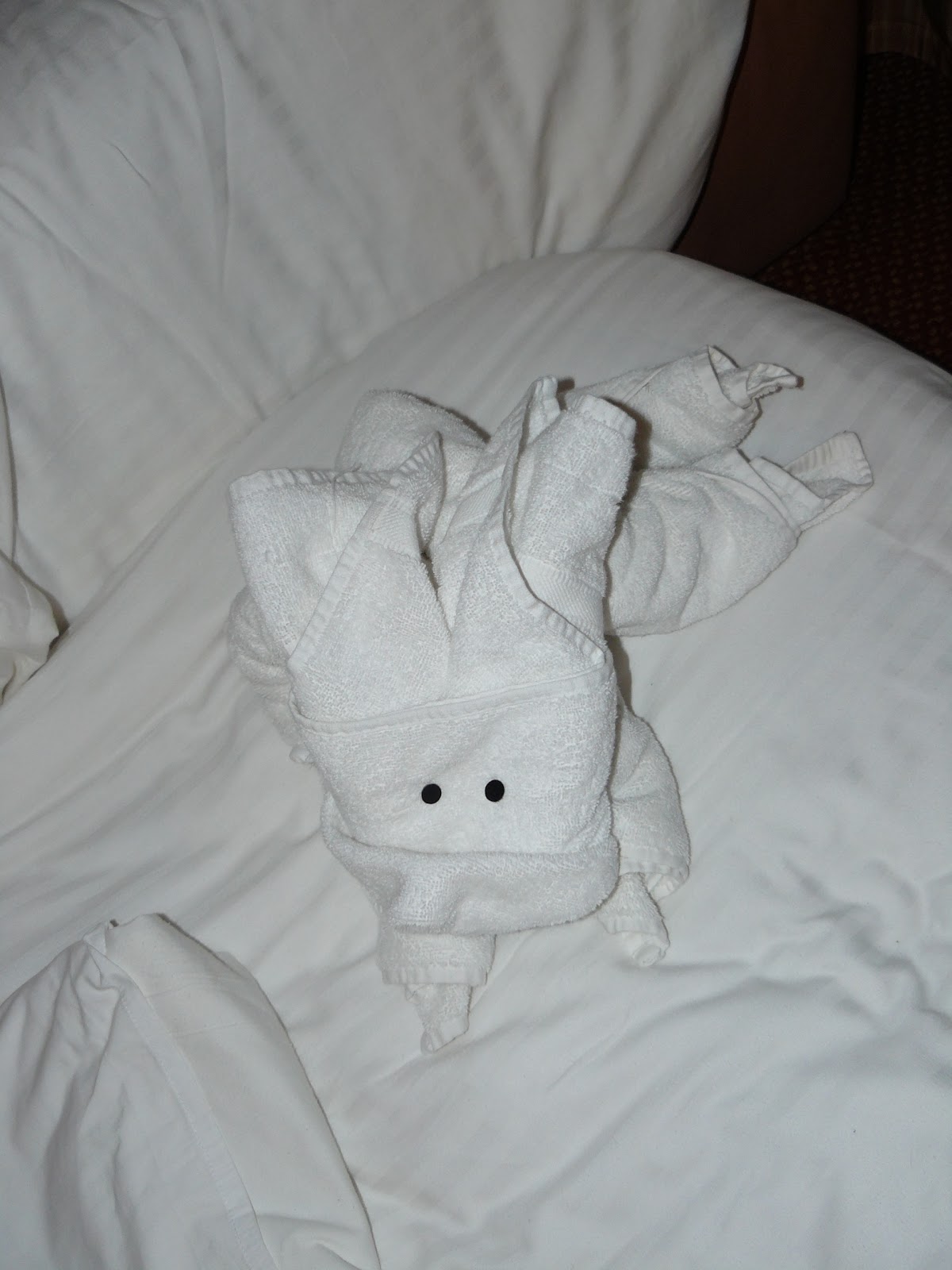 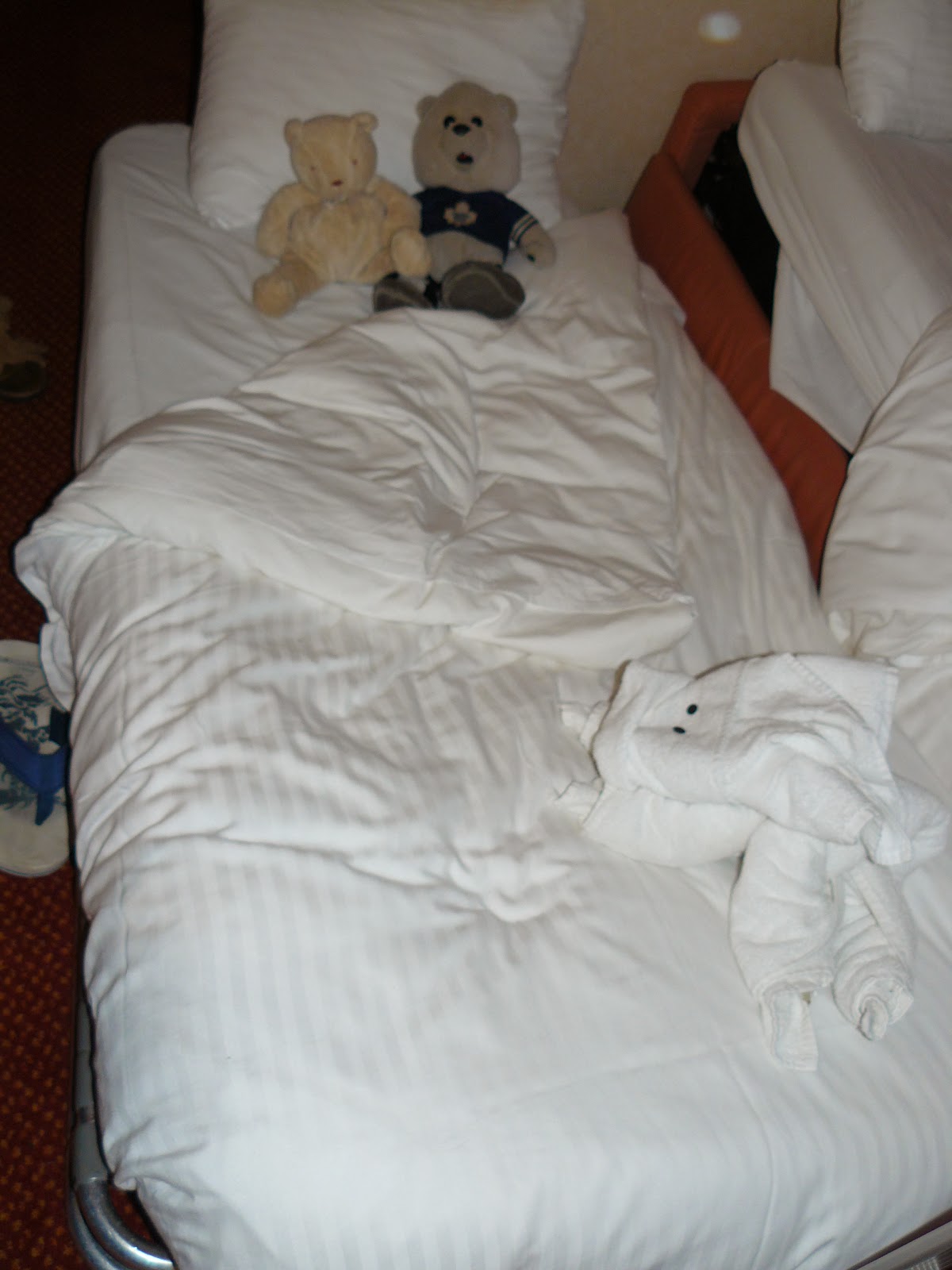 The bears weren't sure what to make of him.

Everything was perfect, except for one small detail. We had arrived at the cruise port with 2 car seats for the boys. In our cabin there was only one. In the hallway we found the armrest off the other.

The mystery of the missing carseat had begun. Who had swiped Buddy's Booster seat! (Cue the suspenseful music.)

Continue to Day 4 here!
Posted by littleboatiris at Tuesday, February 11, 2014