This is a continuation of a travelogue that started way back here!

Carnival lists sea days in their itinerary as "Fun Day at Sea" which sounds great, except that all SWMBO and I had energy to do was to sit on deck chairs sipping drinks and reading. Which is what we did. It was pretty darn fun.

I could end the post there. I mean all we did on our sea day was sit around reading. All. Day. Long.

After a restful night, everyone woke up ready for the new day... 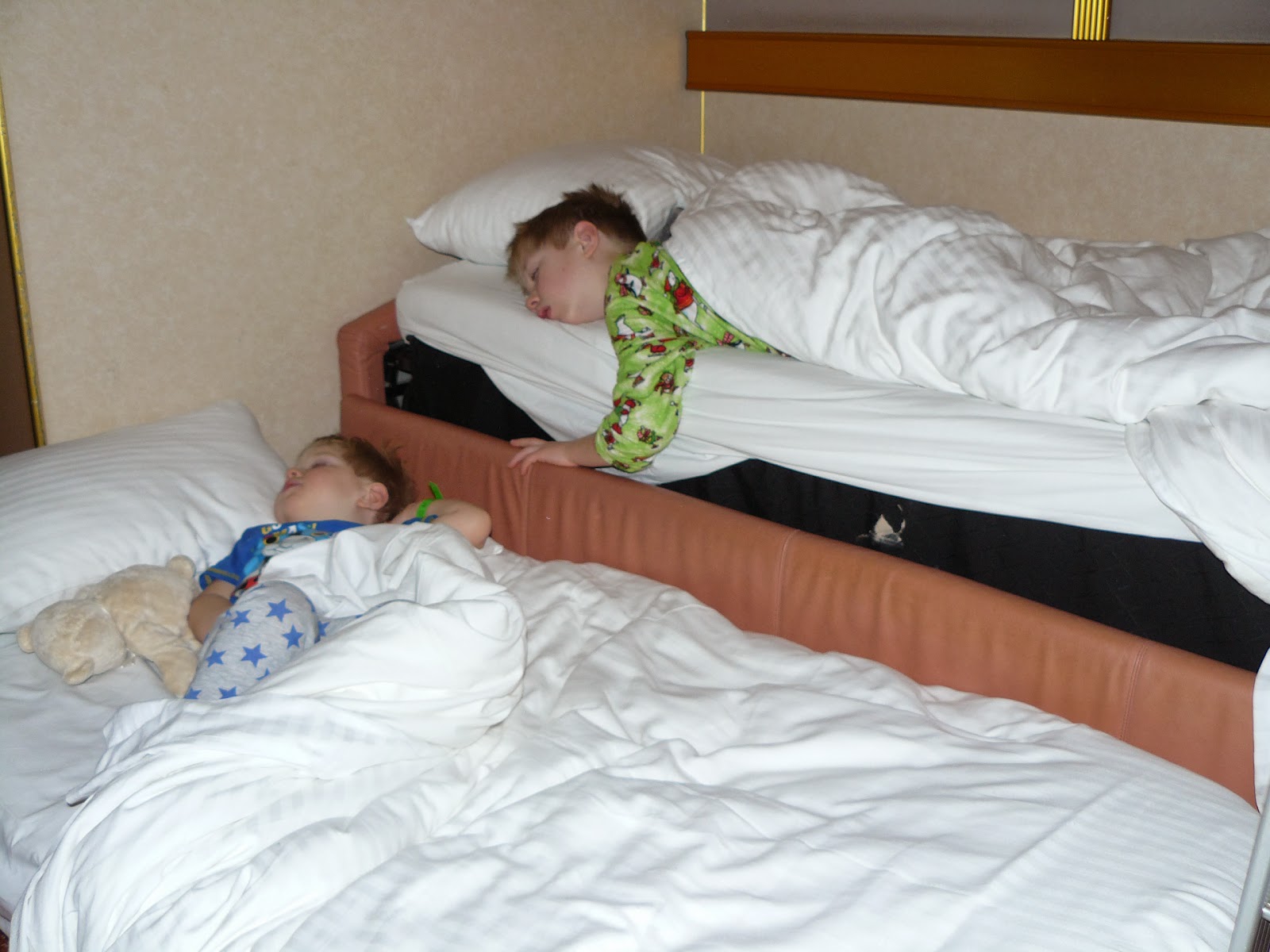 Since Momma and Cuppa were the first two out of bed, they got to play out on the balcony. Actually both of the boys really liked the balcony. We could sit out there and watch for flying fish. 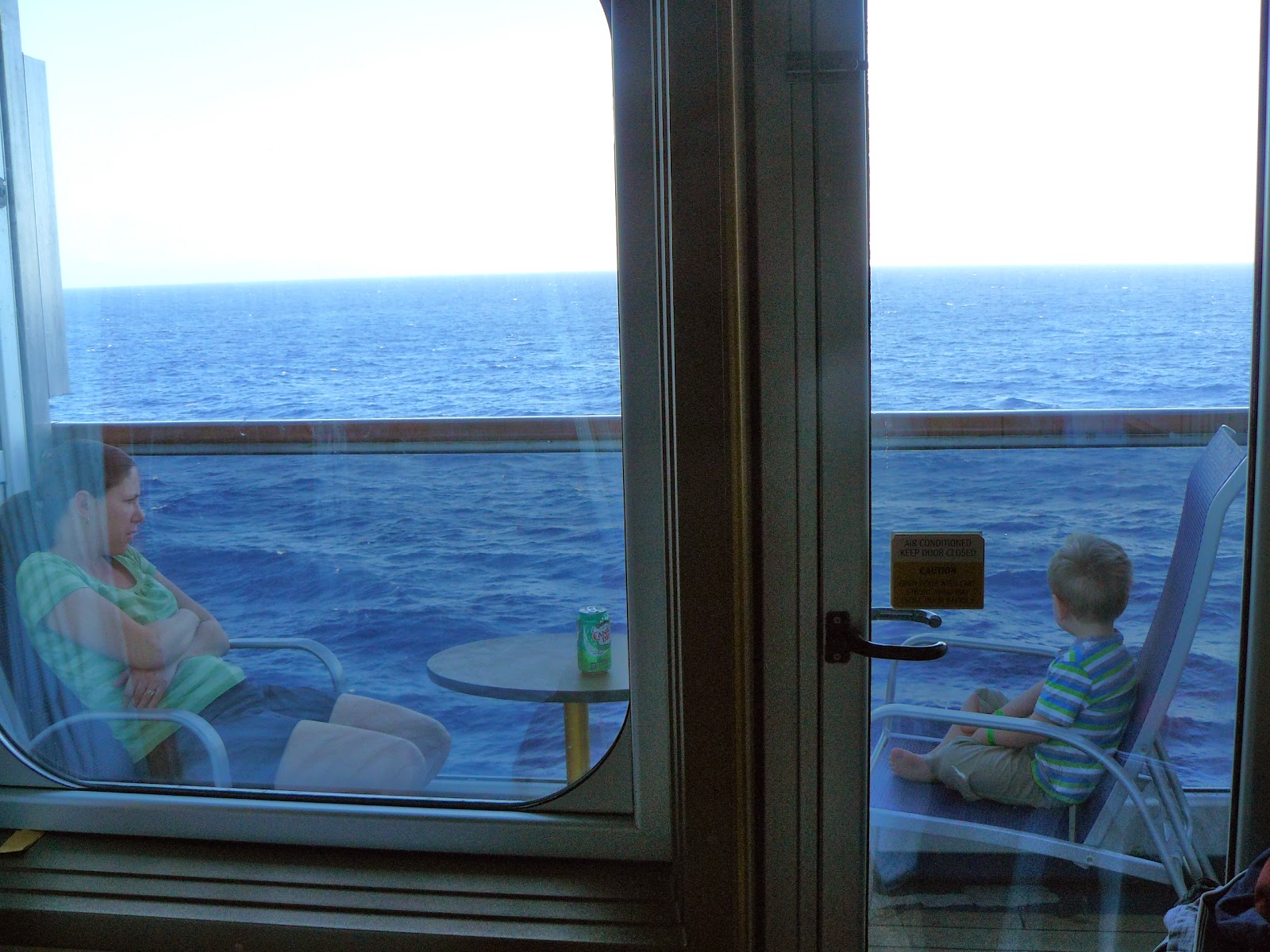 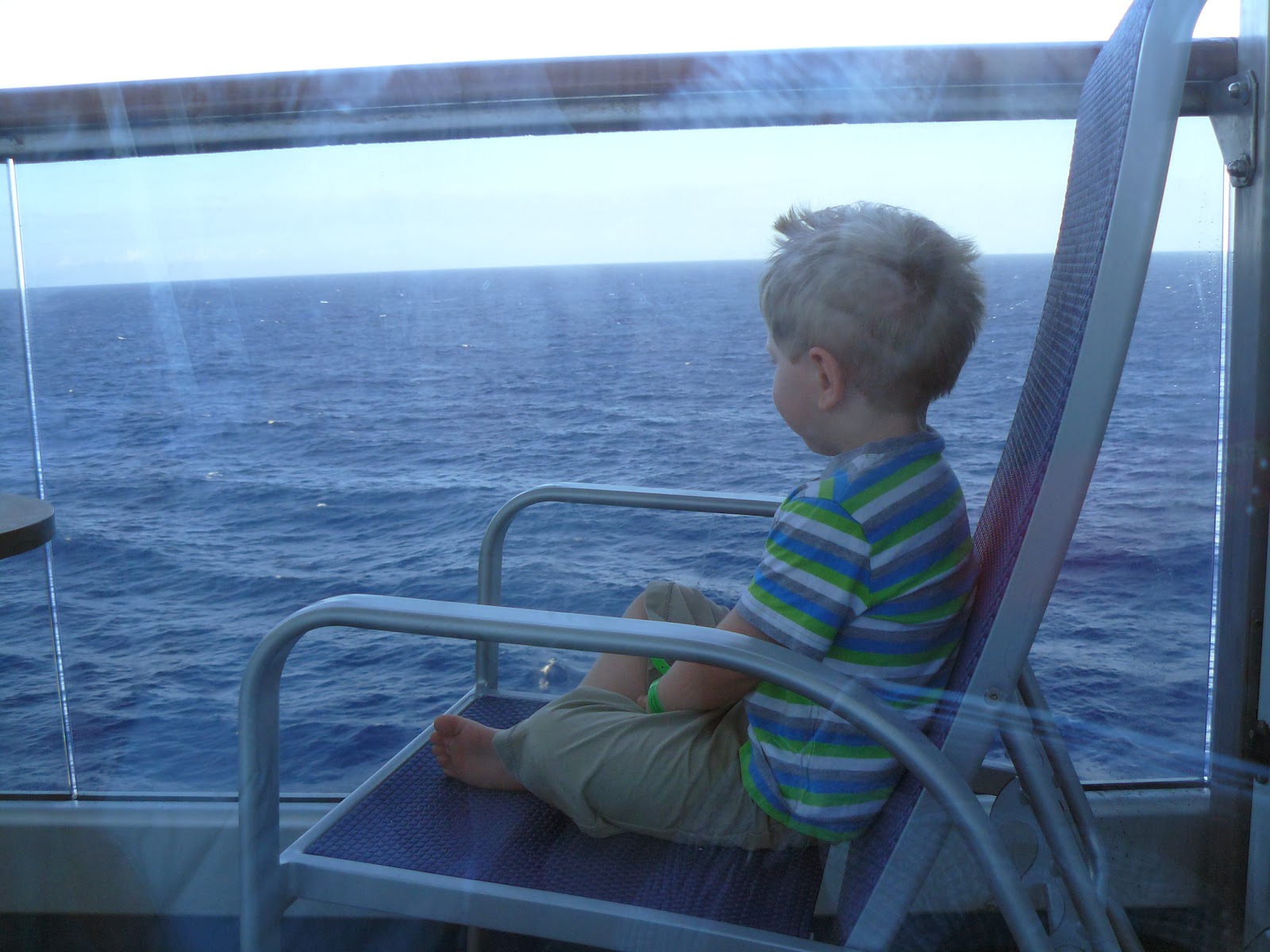 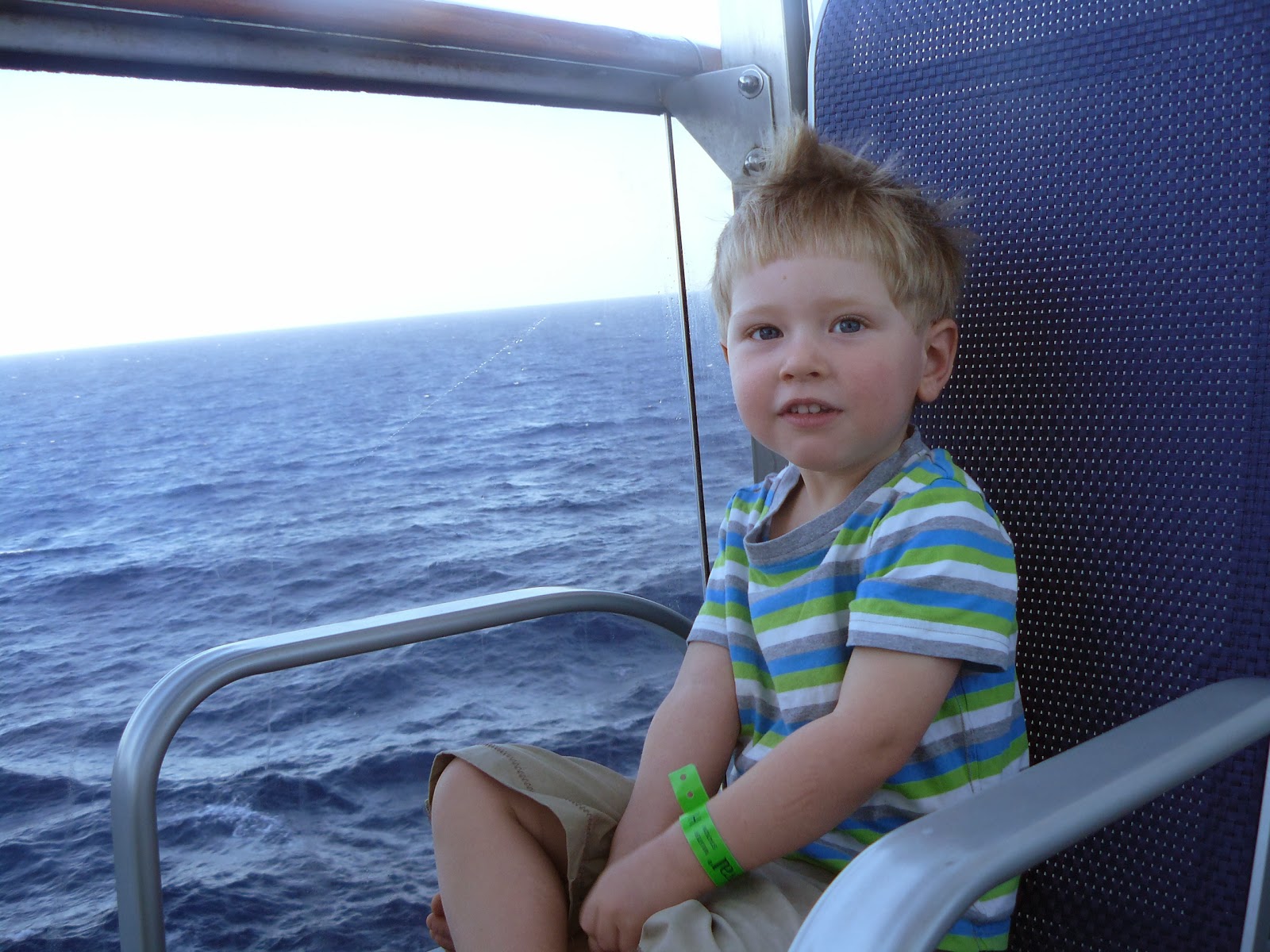 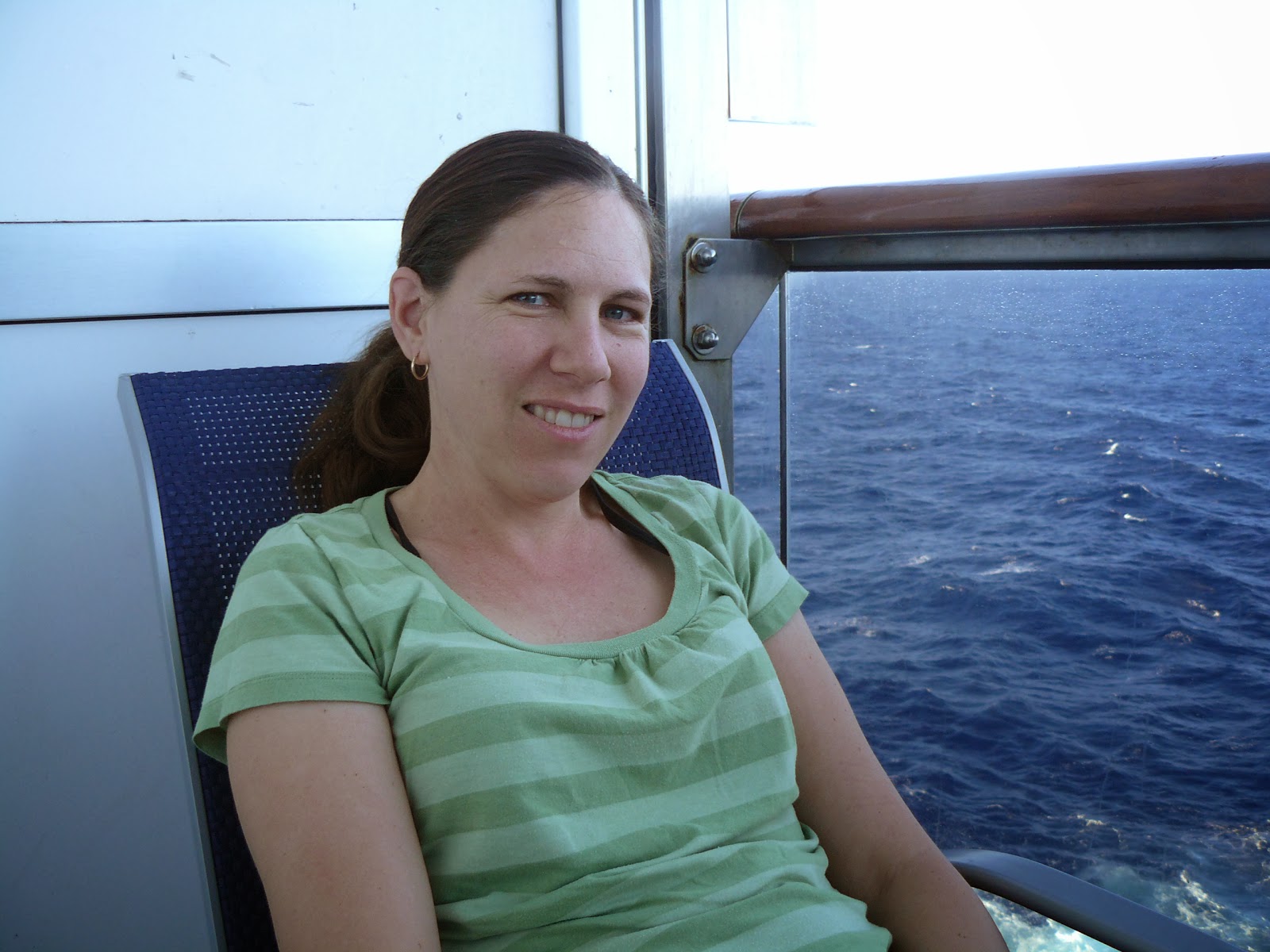 We woke to a sunny sky and some pretty good waves, then had breakfast in the Lido Restaurant - I thought the Eggs Benedict with salmon was fantastic. Buddy thought the Lucky Charms were particularly good. We all noshed until we could nosh no more, then we took the boys to the kids club.

I have no idea what Chuck's day looked like. She left from breakfast, then reappeared at dinner.

It was very windy out on the decks, so we had to work to find a spot where we could lie without getting a sunburn OR windburn OR have the breeze rustle the pages in our books too much AND have a bar boy come around often enough to get drinks. It was a tough day, but we made the best of it, and settled into our books and lounging.

Noon came faster than expected, so we got the boys and had lunch, then returned them to the kids club, and returned ourselves to our deck chairs. After lunch Buddy had a nap, so we moved along to the balcony and sat there (and read).

Once buddy woke up it was too late for kids club so we got dressed and went to dinner where we met up with Chuck. Dinner went really well. Our boys are used to sitting through family meals, and the cruise had supplied a high chair for Cuppa, so we were pretty much set. I have the duck breast for my appetizer which was a good choice. I think it was the best thing I ate all week.

I think (but I'm not sure) that after dinner Chuck melted away to do teen things, and that Momma and I took the boys back to kids club so we could have a date night. If I remember right we went to the evening revue on the boat which turned out to be an endless array of songs with American Cities in their titles. I think Alex Trebek had song titles of America as a Jeopardy category  one night and Carnival just ran with it. If there is a song about where you live, they sang and danced to it. I enjoyed the costumes.

I don't have anything more to talk about on this day, so here's a bunch of pics of the boat stolen from a variety of internet sources. It turns out we didn't take ANY pictures of the actual boat we sailed on.

Here is the Carribean theatre where we watched the show:

This is the Atrium and stairways. We walked through here. There was often Latin music playing.

This is the wall of windows across the transom on Lido Deck. We sat here to watch Miami slip away on debarkation day. This was always a nice shady, quiet spot to be.

And this was Buddy's favorite shipboard feature... The WATERSLIDE!

There isn't much more I can say about our Fun Day at Sea, except that I may have fallen asleep on the lounger at one point. I'm not sure.

At the end of the day our mystery car seat still hadn't appeared, so I approached the guest services desk and explained that it had gone missing, but that we had found its armrest in the hall. The girl at the desk took down our information and said she would do what she could to help. I was a skeptic. We worked our way up to the kids club to claim our boys. I was amazed that at 10:00 PM they were still awake and playing happily.

Continue to Day 5 here.
Posted by littleboatiris at Wednesday, February 12, 2014