Something we've been working on

So, my Little Buddy has been a b**b baby from day one.  He never had a bottle for the first couple of months.  And then when we tried to give it to him, nope, no thanks, I'll take my Mama please.

This went on for sometime.  We tried different bottles, different people, nothing.  He'd take each bottle we gave him the first time we offered it, but at the second try... nope.  no thanks, tried this, didn't like it.  Where's Mama?

Eventually, he suddenly changed his mind.  Which was good, 'cause Mama was going back to work!!  When he turned nine months, we dropped his daytime nursing, and switched them to bottles.  So he was getting two bottles daily.  Except, even though he was nine months old, he still had to be held laying down, or strapped into his infant - toddler rocker, in the most reclined position.  It became known as, "the milk chair."  Because he would not tip his own bottle.  He would hold it, but not tip it.  Then get incredibly frustrated, because, well, he wasn't getting anything.  Just air.  No milk.  If you lay him on the floor, he'd roll over and go play with his toys, then get mad, because he was hungry.

Finally, a couple of weeks ago, he figured this out: 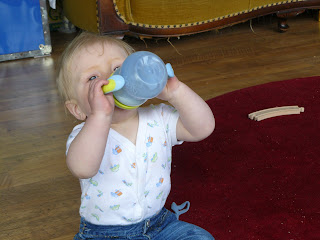 And now Mama is happy.  Because even though I loved snuggling my boy while he had his bottle, he's a year old now, and really, we need to switch to a cup soon.

Just so long as he dosen't figure out this bottle type any time soon: 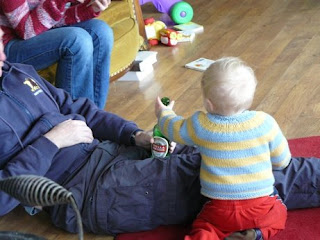