Santa Claus Comes Through the Toilet in Our House....

Seeing as Christmas Eve is just a month away, I thought I'd share this memory from when Chuck was younger.

But when Chuckles was four & five, he did.

When she & her Dad moved into their new house, the summer when she was four, she was terribly concerned.  You see, the first thing that Daddy did was pull down the old chimney.  The house had been built in the 30's, and one of the conditions for insurance was that the falling down chimney be removed.

"But Daddy, without a chimney, how is Santa Claus going to get into our house?"

So he took her around back, and showed her where the vent pipe for the bathroom came through the roof.  It was he only "chimney" that that house had.

Then he took her inside, and showed her where it went.

"I guess in our house, Santa comes through the toilet!!"

I first met Chuck two Christmases later, right after Christmas when she was five.  I'd heard him mention this whole Santa clause / Toilet thing.

As I was admiring all her new Christmas toys, I looked around.... "But Chuck, there's no chimney here... how did Santa Claus get into your house?"

"WELL!!" she says, full of enthusiasm, "In MOST houses, he come through the chimney, but in our house, he comes through the Stinky Stinky Toilet!" (she plugged her nose when she got to the 'stinky' part).

I was glad that I asked her when I did.  The next year, when we brought it up, a teacher at school had corrected her.  Santa Claus has a mouse, you see, and the mouse sneaks in and opened the door for Santa.  We were disappointed, because it was a fun family thing.  But it was fun while it lasted.

That year, she brought home reindeer food from school, in a brown paper bag.  We stuck the bag on the roof, kind of sticking out of the vent pipe.  But unfortunately, she still wouldn't go back to it. 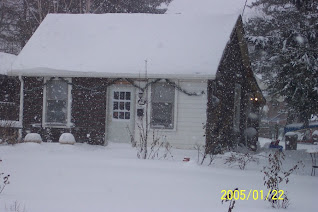 (If you look really really closely at the lower left window pane, you can see her face in there)
Posted by Star at Wednesday, November 24, 2010