Chuck has been in Guiding since she was six years old, as a spark. She has always been very enthusiastic, has loved the camping, etc. She was a spark for a year, Brownie for two, and has now finished her third year of Guides.


This year, not only did she go to Guides on Wednesdays, but she also went to help with a spark unit (5 & 6 year olds) on Thursdays. Then, in May, she was invited to start attending Pathfinders on Tuesdays for the remainder of the year.

The highest award she can earn at this level is her Lady Baden Powell Award, which she and her best friend did together.

There is a lot of pomp & circumstance around receiving this award, and it is A LOT of work, so there should be. The girls who earn their award receive:

- A pink flower from a Spark leader

- An orange flower from a Brownie leader

- A blue flower from a Guide leader

- A Certificate that they earned their award

- A Certificate from the local MP

- A Certificate from the Local MPP

So, here we have:


Receiving the orange flower from "Ladybug," who is the Brownie leader in the same school as us. We often go camping with Ladybug's unit. Even when we don't camp with her unit, we tend to camp near their unit, and run many joint activities. 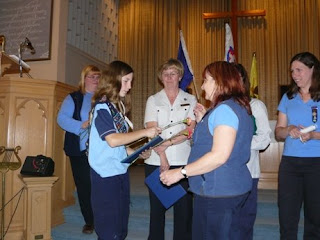 Receiving her Blue Flower from "Saphire," who is my co-leader, and has been Chuck's leader for the past three years with me. 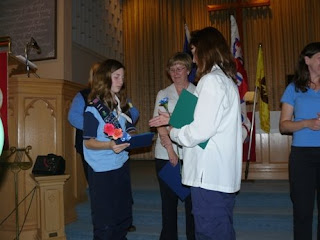 Receiving something from me... maybe it's the certificate??  Or maybe her yellow flower?? 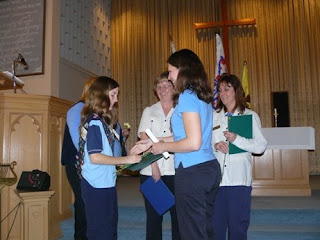 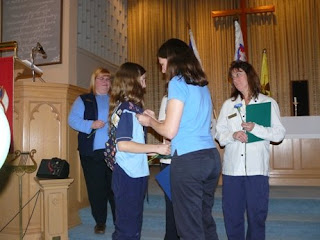 Chauck and her two friends, advancing to Pathfinders.  This is separate from the Lady B-P award.  Chuck & her friend beside her both earned their Lady B-P awards, but the third girl choose not to finish hers. 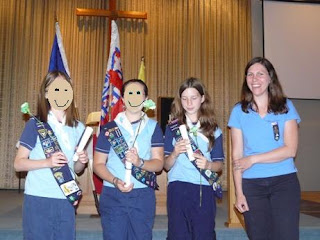 When the girls advance to Pathfinders, they all receive a green flower, which is the one that the girls have in their hands now.


She also had the honour of reading "Being the Leaders Daughter," a poem about the trials and tribulations that a leaders kid has to 'endure.'

So next year, she goes on to Pathfinders, and I stay back. For a year. Then I'll probably either switch roles (become a mentor instead of a unit guider, or a trainer, or something), or leave. But I have been in Guiding for 18 years now.... While I don't really think I have the time for it that I'd like, I have a hard time just leaving. This is why the mentoring idea sounds good... less commitment, more flexibility around scheduling, and I don't HAVE to be there every week at the right time. In this role, I would help new guiders learn the ropes, or do occasional guest type programming where others need help. Although I have heard that the current three awesome Pathfinder leaders have said that this is their last year… so who knows I may end up moving up to be with her a year after she goes on!
Posted by Star at Wednesday, June 24, 2009