I Know I know, these are supposed to be on Iris' blog, but whatever.

Two weekends ago was the Cook's Bay to Kempenfelt Bay race , and it was an exciting two days. When I arrived at Cook's Bay with the Kids (By car... we can be wusses at times), the marina was abuzz with rumours about how the O'Day went down.


Sunday morning we all crawled off our boats (and I mean crawled... one Mama, one Daddy, and one baby sharing a v-berth on a 25 foot sailboat does not make for a good night's sleep), and went for breakfast.  After breakfast, the boats all left their raft up.... very, very slowly & carefully. 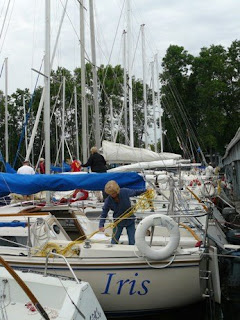 There were two boats left to go, and then the relay came down the line of boats heading out into the Bay.... There's a Boat Stuck in the Channel.  There is very minimal draught in this channel, and one of the boats was appparently a little to "draughty" to fit in (well... he made it in... it was out that was the problem...)


So the little Tanzer 22 went to his help, being close, and also having much less draught than the others.  With all crew leaning on the rails, and with the T-22 pulling on one of the halyards.... Nothing. 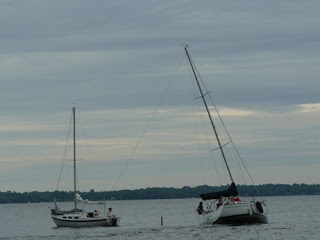 Captain C tried his best to get her free... but just couldn't 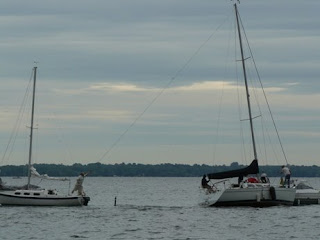 A powerboat from the Marina (you can just barely see it in the picture above), eventually pulled her free.
--
--
Now, because the other boats behind were in a holding pattern, waiting (it is a narrow channel), the next boat was stuck, and needed a pull.  Then the one behind that was aground, but he was able to push out.
--
--
The next weekend, DH sailed Iris around to Lagoon City... and BB & I, in our normal pattern, drove.
Posted by Star at Friday, July 10, 2009