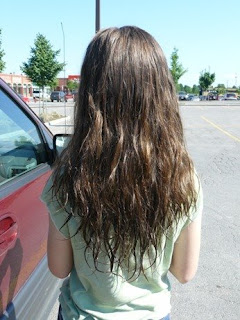 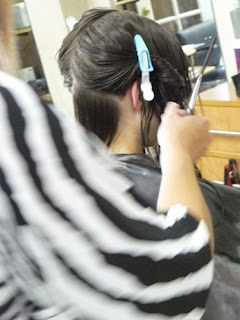 And I forgot to take the after shot of it down her back, but here's a recent photo from her Cousin's B-Day party last weekend: 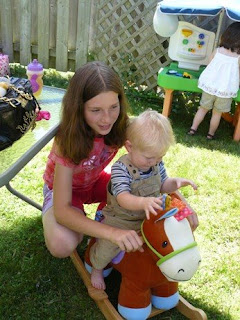 The hairdresser asked her why she wanted it so short, and she said that it was because she wanted to be nice and cool for the summer.  The Lady took one look at her hair, and suggestted a leetle bit more length....her hair is very, very thick, and if cut that short, would just puff right out, and be too short for a ponytail.  The hairdresser suggested that she keep enough of the length to tie it back when it was hot out, otherwise it would be sticking to the back of her neck.
--
--
I think she was a little dissapointed... I think she wanted the 'shock factor' of really short hair, especially since her hair had been long forever.  If she's still unhappy with it when she comes home from her three weeks at her Mom's house (where she is right now), then I'll take her in and let her get it done... she will probably be unhappy with it, for all the reasons that the hairdresser suggested, but, it will be her choice, and she was warned by us both!!
Posted by Star at Wednesday, July 08, 2009