So, Churck's b-day this year fell two days before Father's day, as per usual.  Try getting a bunch of kids out for a party on Father's Day weekend.  I dare you.

So instead, her Dad took her and one friend to the drive in movies the next weekend, then the girls stayed in a tent in the backyard.  I think that it was a success.  The girls saw "The Proposal," and "Up."  For some reason, the theater played "The Proposal" first, then the kid movie, otherwise DH probably would have just brought them home after seeing "Up."  In preparation, I went to the store and bought a crap load of candy, drinks, etc.  I figured it was a drive in, they could take food in in the car, and the more I sent them with, the less they would whine for food from the concessions.  As far as I know, it worked.  They arrived home at 2:30 am, tired and happy, and went out to the tent, which was equipped with a portable DVD player, a Ghetto blaster with extension cord from the house, and a Ninetendo DS.  The girls were told as long as we couldn't hear them, we didn't care.

Friend waking Chuck up in the morning 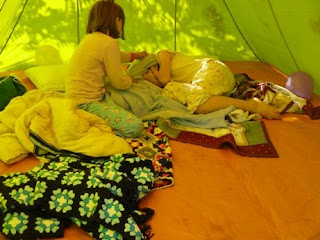 If Grandpa P is reading, yes that is the canvas tent that you took your kids camping in.
---
---
---
Breakfast
(I know, I'm a horrible parent)
(yes that is orange pop in the glass, not orange juice)
(And Doritos beside the chocolate cake) 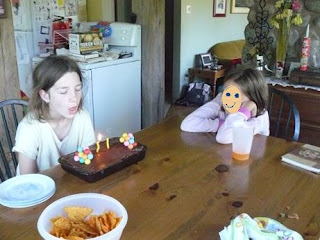 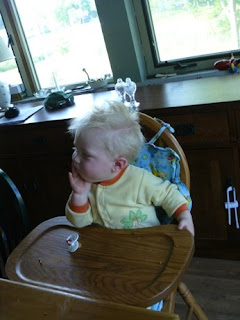 For her Birthday she got a gift card to W*lM*rt from her Aunt, and a cheque from my Grandma.  Between the two, and other assorted W*lM*rt gift cards from previous birthday's / Christmas', she was able to buy herself a brand new spankin' bike.  If I were organized, there would be a picture of it here. Alas I am not, so you will have to use your imagination. It was nice that she was able to combine gifts from people to get something that she really, really wanted.  From her Dad and I, we got her an electric razor, in the hopes that she is less likely to injure herself that way.

A few days later, my Mom did a little party for her at her house.  This time, we had the cake for dinner, not breakfast! 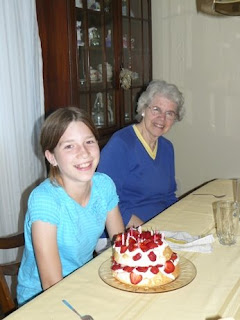